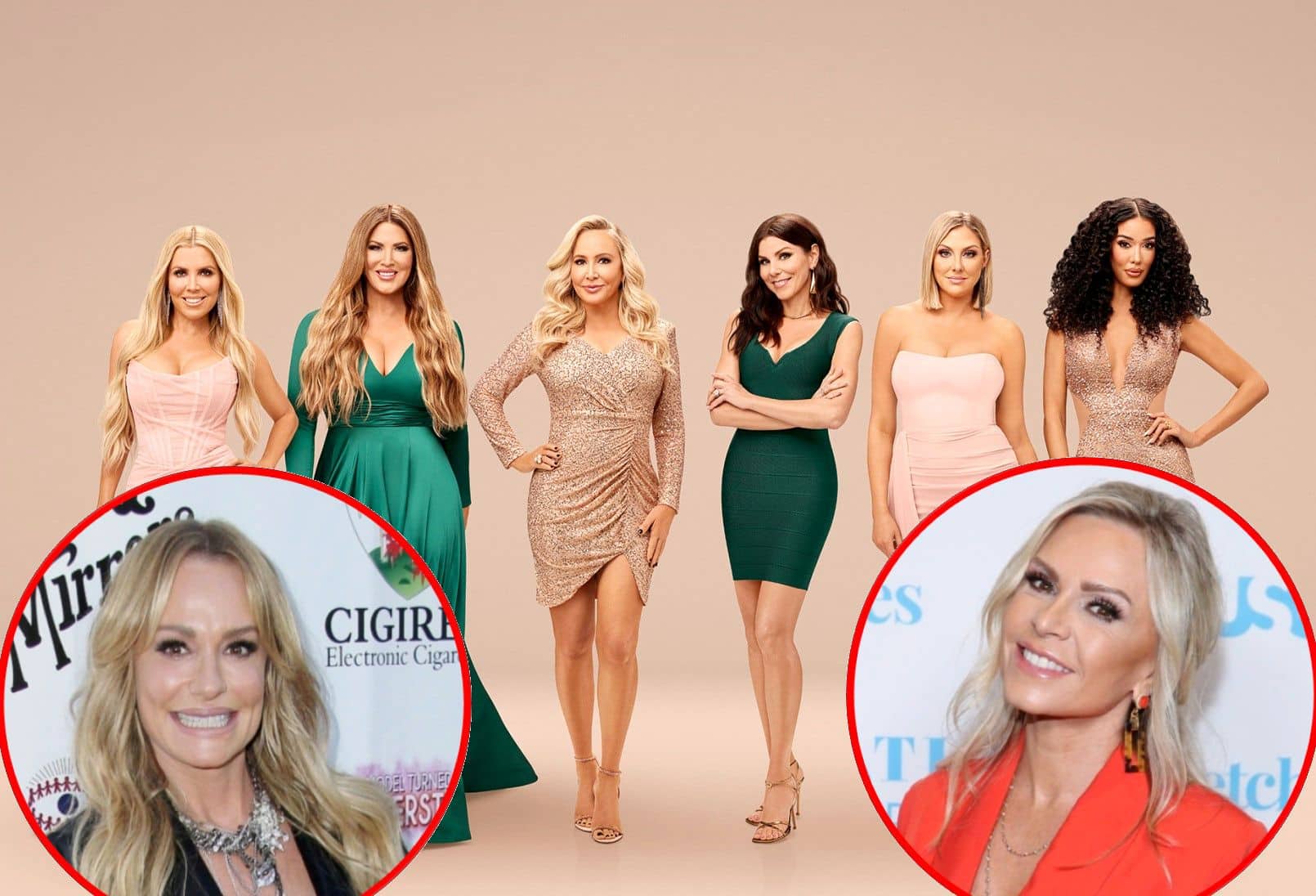 Following the news of Taylor Armstrong‘s addition to The Real Housewives of Orange County cast, fans are learning more about what season 17 may look like.

After The Real Housewives of Beverly Hills alum was confirmed as a part of the new season’s cast, a report revealed that one of the season 16 ladies will likely be demoted ahead of season 17 as a couple of former housewives return to the show for its new episodes.

“Heather Dubrow, Shannon Beador, Emily Simpson, and Gina Kirschenheiter are all returning from season 16, however Gina has [rumored] to be demoted to a ‘friend’ for the upcoming season,” the Real Housewives Franchise on Instagram revealed. “Tamra Judge is making her turn as a full-time housewife, and Taylor Armstrong will be featured as a ‘friend of’ for season 17.”

The report then shared that former housewife Alexis Bellino is “in contract negotiations,” and she is expected rejoin the show as a friend if she decides to return.

“Likely to be [one] (maybe [two]) new housewives, and Vicki Gunvalson may make guest appearances, as Tamra has stated that she will be inviting Vicki to events filmed throughout the season,” the report continued.

The report also suggested, in a comment, that Bravo has told the cast to “bring it” to season 17. Otherwise, they explained, the show could be split into two shows. This would include an RHOC: Legacy series, just like The Real Housewives of New York City was given after its lackluster 13th season.

In a statement of her own, Taylor confirmed she’ll be starring as a “friend” on season 17.

“I am excited to be back on Housewives as a friend of the ladies. Orange County has been my home for the last seven years. I recently bonded with Tamra on RHUGT, and have met Shannon and Heather. I can’t wait to meet the rest of the women and get going,” she said, via The Real Housewives Zone on Instagram. 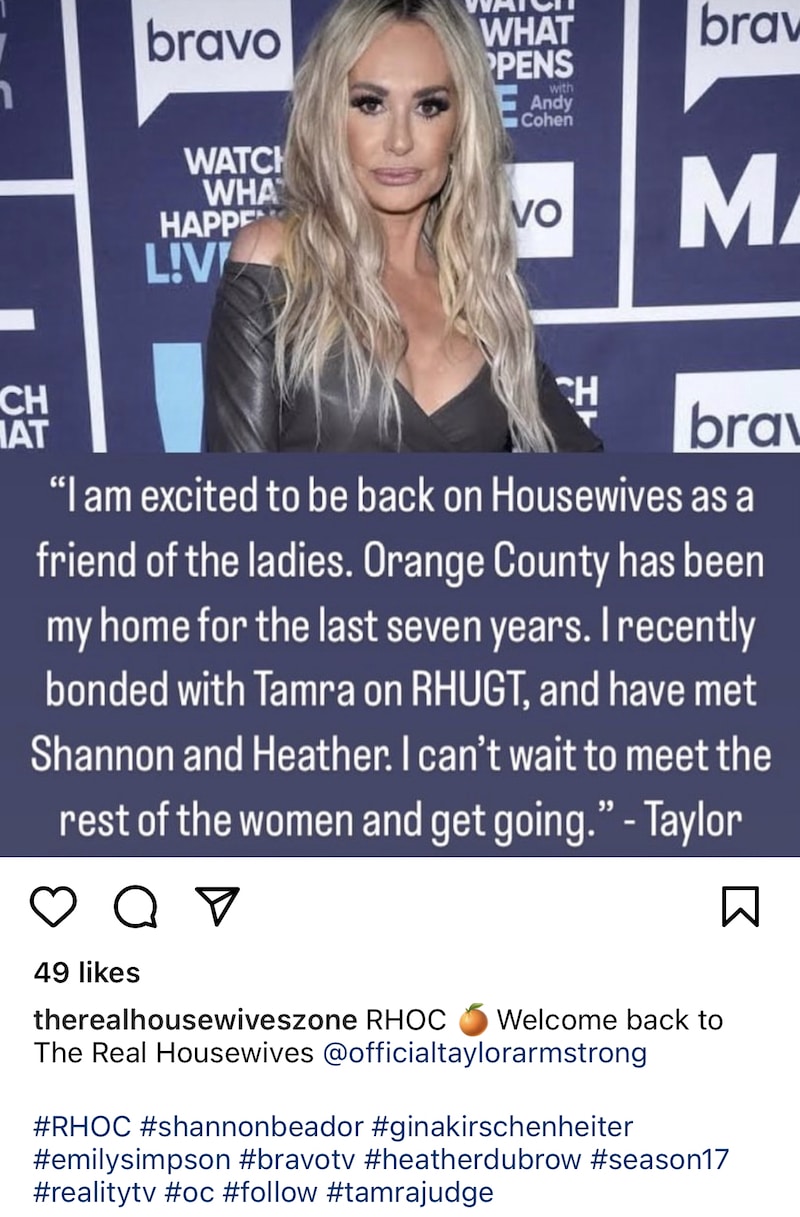 Following the news of Taylor’s addition to the RHOC cast, her former RHOBH co-star, Kyle Richards, reacted to her Bravo return in an Instagram Story. 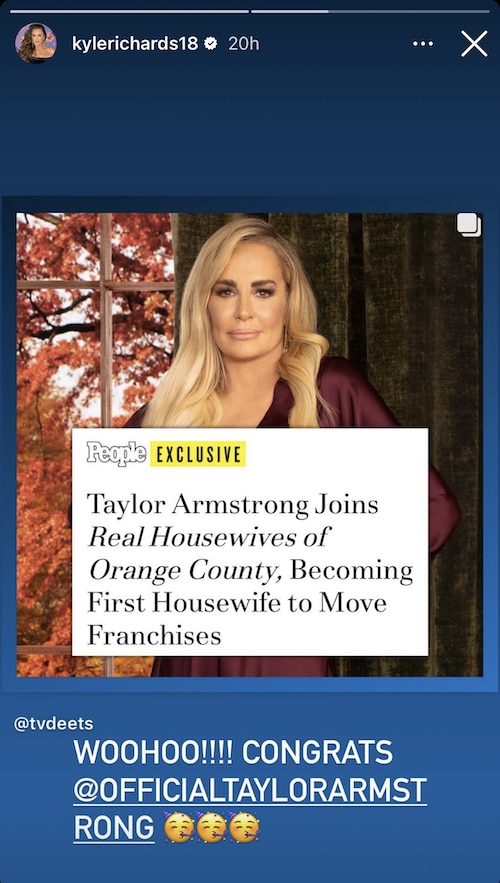 Camille Grammer reacted as well, writing, via Comments by Bravo on Instagram, “Congratulations [Taylor Armstrong] I’m so happy for you! Go OG!!”

And in a post on Twitter, after breaking the news of Taylor’s return early on Monday, PEOPLE reporter Dave Quinn further clarified her role.

“And I can clarify, for those asking, that Taylor Armstrong will be joining [RHOC] next season as a Friend,” he tweeted on August 1.

And I can clarify, for those asking, that Taylor Armstrong will be joining #RHOC next season as a Friend 🍊 https://t.co/9Pu2uawox7

No word yet on when The Real Housewives of Orange County will return to Bravo.