Home Keeping Up With the Kardashians Kanye West Disses Kardashians as Kris Jenner Begs Him to “Stop,” Says He Won’t Let Kids Do Playboy Like Kris “Made” Kim Do, & Refers to Himself & Tristan as ‘Sperm Donors,’ See What Caused Rant

Kanye West Disses Kardashians as Kris Jenner Begs Him to “Stop,” Says He Won’t Let Kids Do Playboy Like Kris “Made” Kim Do, & Refers to Himself & Tristan as ‘Sperm Donors,’ See What Caused Rant 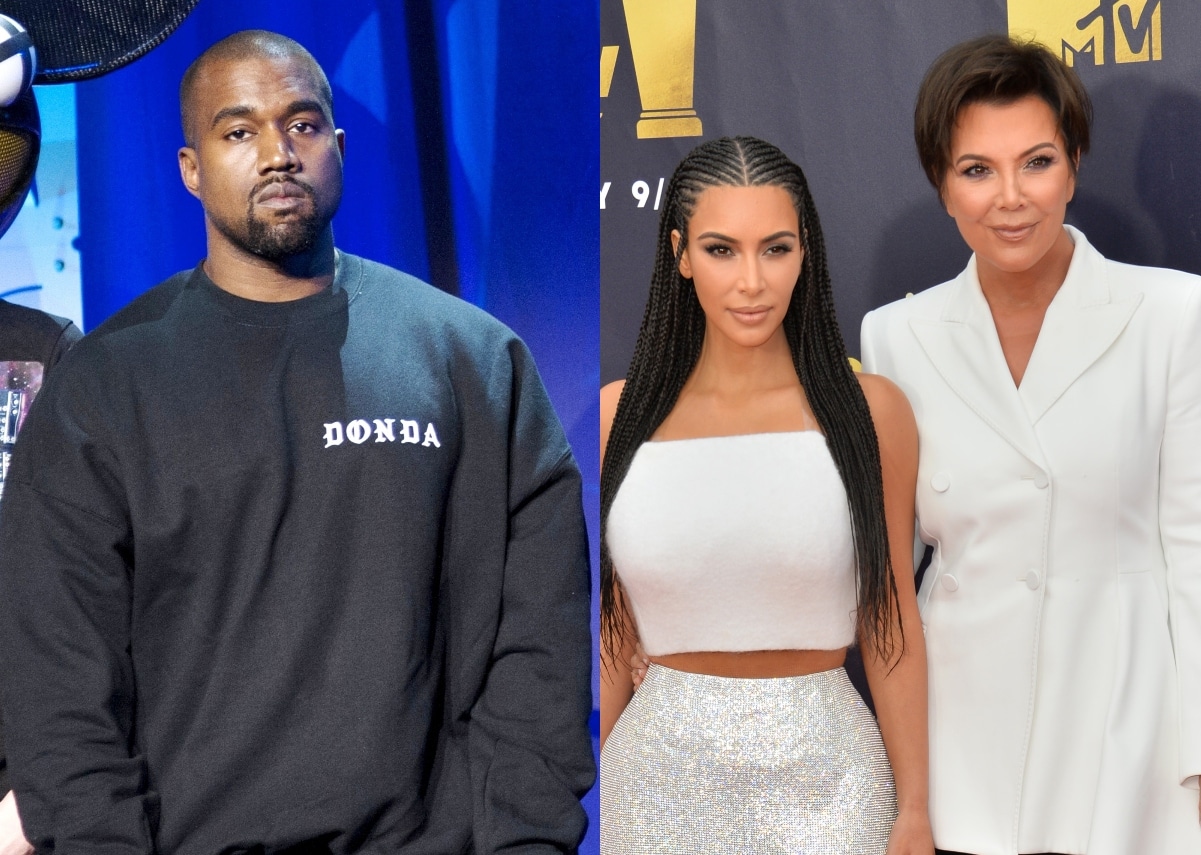 After seemingly being prompted by a dispute over where his and Kim Kardashian‘s kids, including North, 9, Saint, 6, Chicago, 4, and Psalm, 3, will go to school, Kanye said Kris made Kim and Kylie Jenner appear in Playboy before shading a number of Kardashian exes. He also shaded Kim’s most recent ex, Pete Davidson, for being in the “trauma unit.”

“Don’t let Kris make you do Playboy like she made Kylie [Jenner] and Kim [Kardashian] do,” Kanye wrote on Instagram on September 1, along with a photo of Kylie’s friend Victoria Villarroel, via Us Weekly. “Hollywood is a giant brothel. Pornography destroyed my family. I deal with the addiction [and] Instagram promotes it. Not gonna let it happen to Northy and Chicago.” 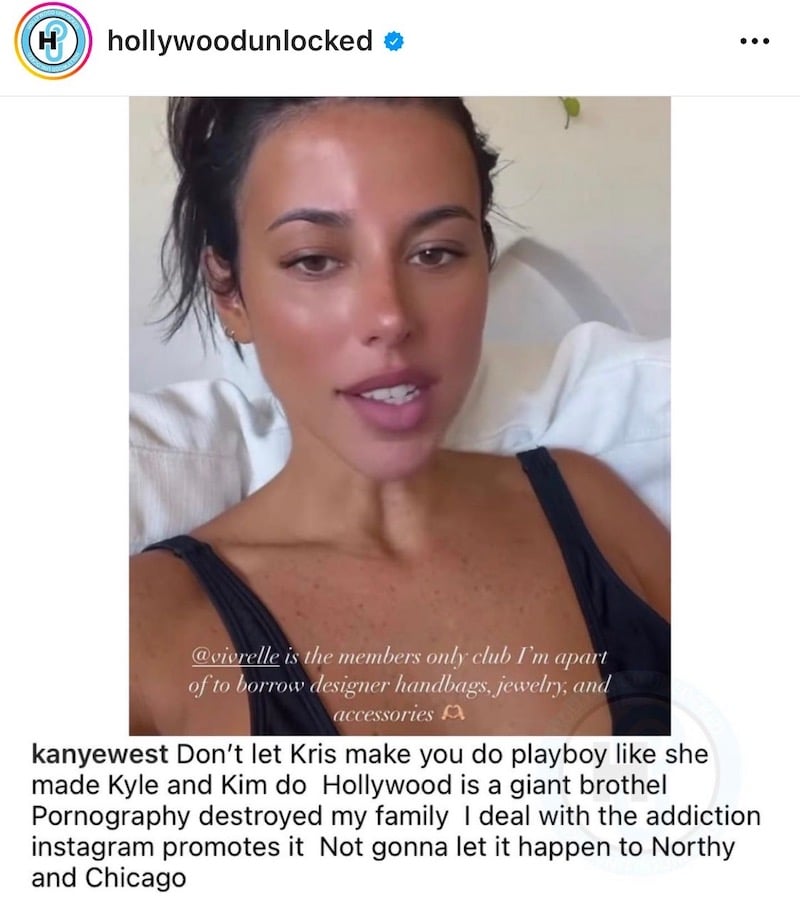 Earlier in the day on Thursday, Victoria had posted a message on her Instagram Story about a members-only club that offers designer handbags, jewelry, and accessories. But in Kanye’s post, he hinted at ties to NSFW content.

In another post, via Hollywood Unlocked on Instagram, who shared a number of Kanye’s now-deleted messages, Kanye told an unidentified person, “We need to talk in person.”

“You don’t have say so of where the kids go to school … Why you get say … Cause you half white?” 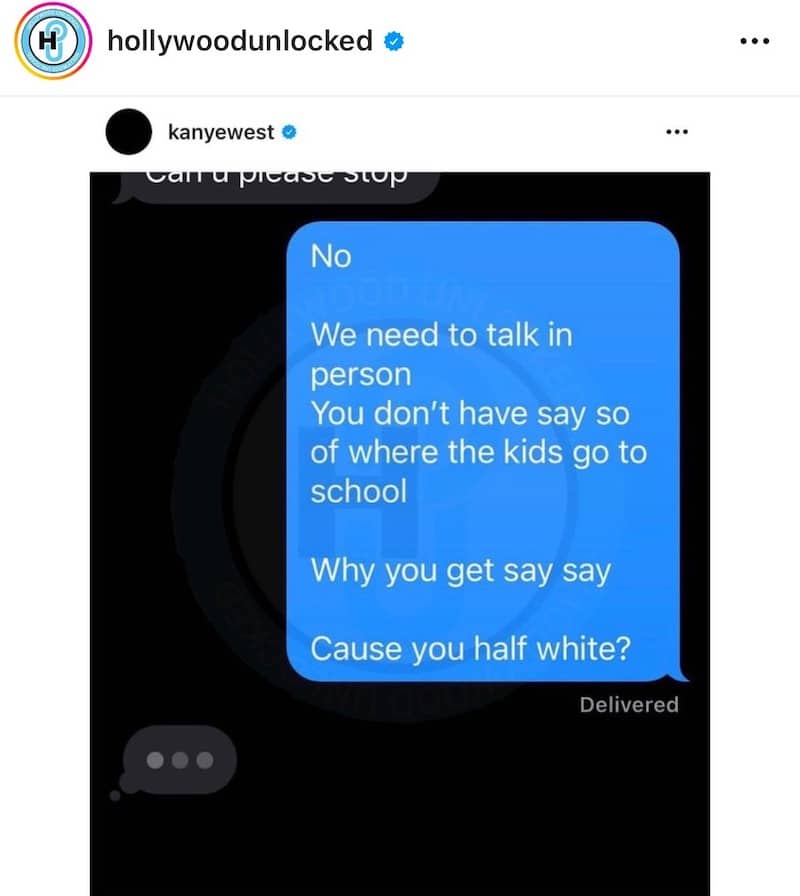 In another post, seemingly addressed to Hilary Clinton and Mark Zuckerberg, Kanye added, “My kids going to Donda … They not going to Sierra Canyon … Charlemagne the God and Kris … Get your motherf-cking popcorn.” 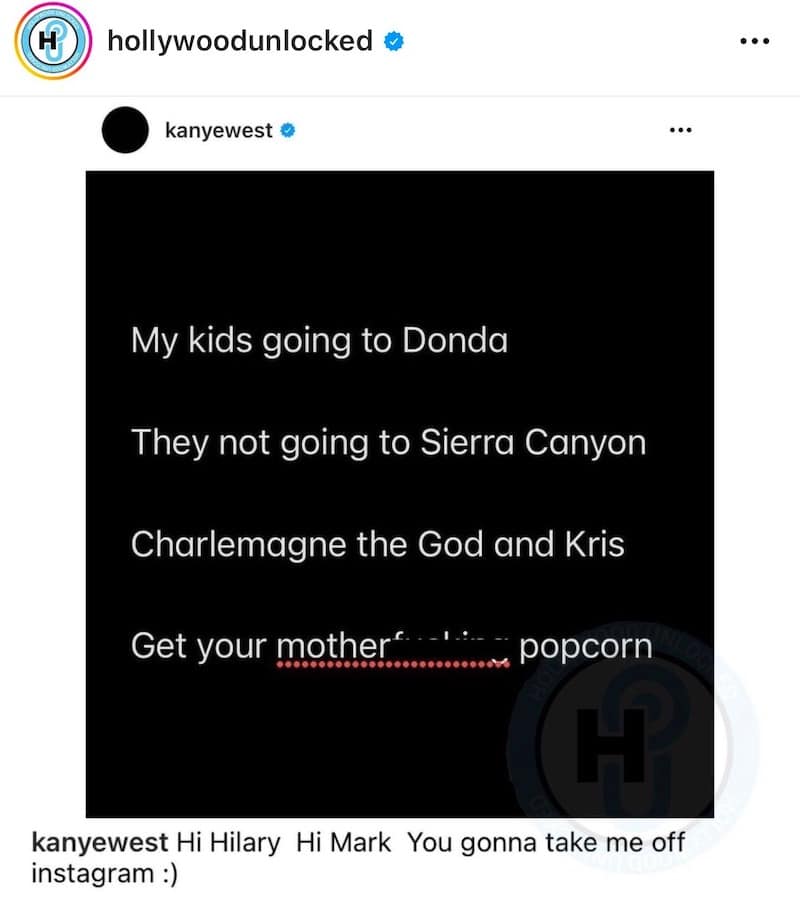 Following his message about Kris and her supposed pushing for Kim and Kylie to appear nude in Playboy, Kanye shared a text he received from one of Kris’ kids, who sent him a message believed to be from Kris.

“Tell him to please stop mentioning my name. I’m almost 67 years old and I don’t always feel great and this stresses me to no end,” Kris allegedly said, appearing to hint at potential health ramifications.

But in response, Kanye continued to express frustrations.

“Y’all don’t have so so over my black children and where they go to school … They will not do Playboy and s-xtapes … Tell your Clinton friends to come get me … I’m here,” he stated, along with a caption that read, “God Loves Us.”

As for his post about Tristan Thompson, Travis Scott, and Scott Disick, who share children with Khloe Kardashian, Kylie, and Kourtney Kardashian respectively, Kanye labeled the men “c-m donors,” and he said, “We in this 2gthr.”

Amid his concerning rant, Kanye posted a message, via Us Weekly, in which he denied being in a downward spiral.

“Anybody that says I’m spiraling when I express the undeniable truths is a sheep. STFU and worry about your own kids,” he insisted. “I obviously am dealing with wars at the highest level of control and discrimination based on the level I’m operating at. A conductor gotta turn they back to the audience to direct the orchestra. ‘Oh Ye crazy’ is basic a f-ck at this point. I’m simply right.”

He even seemingly took aim at his ex-wife and her racy past, saying, “I know girls who sell p-ssy that don’t agree with how my daughters are displayed,” before turning his attention to Pete.

“Ask Pete how those tattoos of my kids doing in the trauma unit,” he wrote, signaling the “trauma therapy” Pete allegedly underwent as a result of his prior bullying of the comedian.

The Kardashians season two begins streaming on Hulu on September 22.