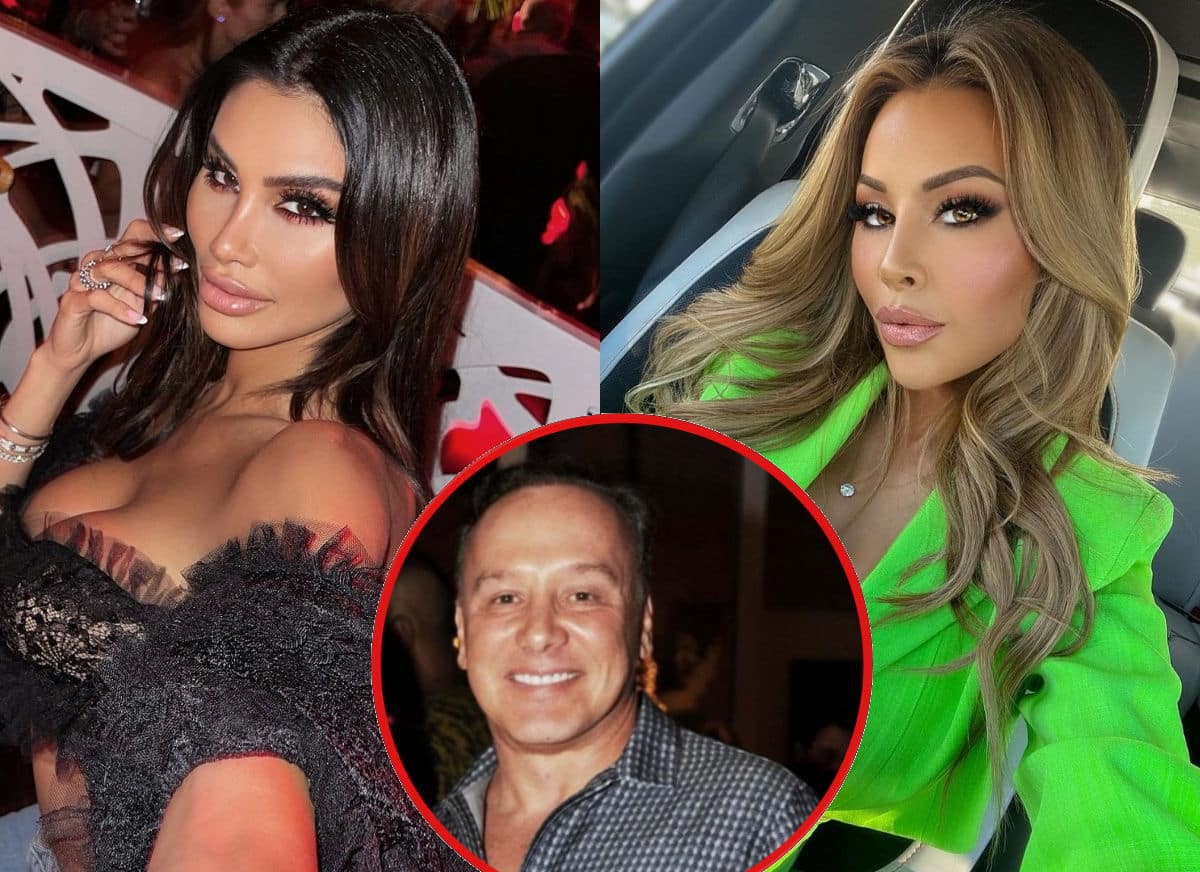 Lisa Hochstein is being slammed on Instagram by Morgan Osman, the woman believed to have been involved in her estranged husband Lenny Hochstein‘s emotional affair years ago.

After taking to her Instagram Story earlier this week to suggest she’d received “an unexpected and beautiful surprise” from Morgan, who was behind a bouquet of flowers and a message that said “freedom looks good on you,” the Real Housewives of Miami star is being hit with a number of insults from Morgan, who has also confirmed that the flowers she sent were for Lenny, not Lisa.

“LISA IS AN INTERNET BULLY. I absolutely did not send her flowers. She wishes. Clown! IN REAL LIFE I’ll see her,” Morgan warned as she commented on Reality Blurb’s Instagram post on September 15.

Then, after someone told her not to “stoop to their level” and another said to “beat [Lisa’s] a–,” a third wondered why Morgan was involving herself in the drama, especially considering Lenny has moved on with girlfriend Katharina Mazepa.

“Right, because you sent it to Lenny instead saying divorce looks good on him. Why are you still going after this man even though he has a [girlfriend]? It’s weird,” they said.

“[Because] in real life she’s still going after me! THATS WHY! ok,” Morgan replied. 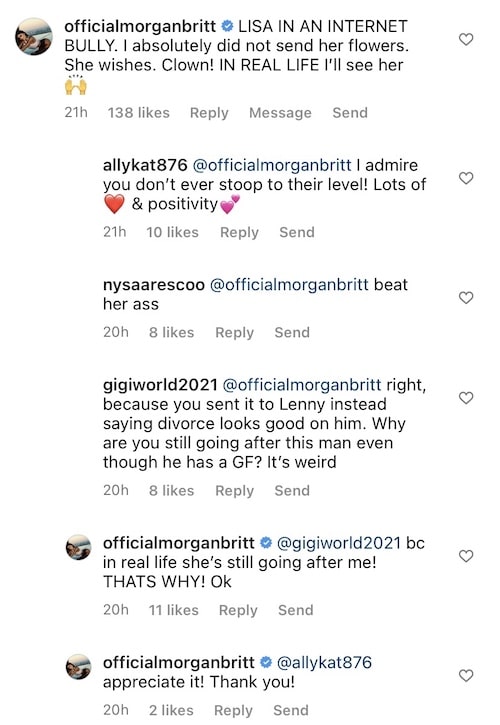 Another Instagram user shaded Lisa for having a “full-time career of loitering the Bar Harbour shops and photoshopping her face beyond recognition for IG” and encouraged a different person to “name five minutes of productivity you’ve ever seen that woman accomplish.”

“It’s funny because her ex-husband says the same exact thing,” Morgan replied. “She didn’t cook she didn’t clean, she purposely scheduled every single appointment for 8 PM so that she could avoid him when he came home from work and the whole beach knows she didn’t have sex with him what did she think was going to happen.” 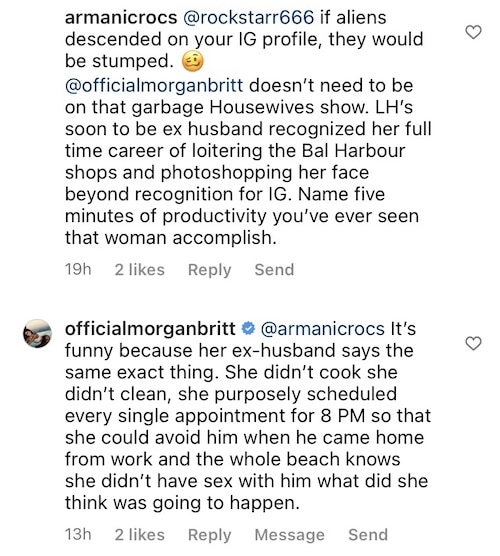 “Honestly, I think you both should just kiss and make up,” someone else wrote in a comment. “I know you may never want to, but after all you’re both July 24 babies… I think both fire and not good to hate. Let’s calm down and just blame the dude who’s the center of it. But sh-t happens. We all make mistakes. Be mature, and hug each other and forgive each other. He used you both, and now he’s enjoying the cat fight from the sidelines. Us women need to stick together. At least for the sake of the children let’s not destroy each other.”

But according to Morgan, she has already tried to make amends with Lisa.

“I TRIED THIS. Of course I’ve tried. I apologized to her face 10 years ago. It’s not that,” Morgan insisted, proceeding to berate Lisa with additional statements. “She’s a low class drama queen dressed up in diamonds. She thinks she’s above everyone and has a REAL (fake) issue with me. So here we are and I’m DONE! With it. All of it.” 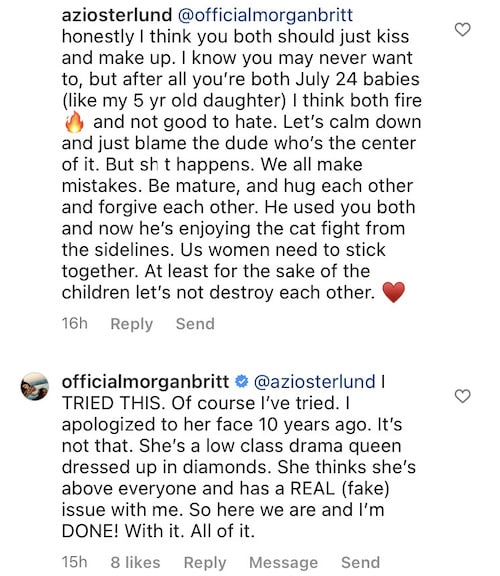 Morgan further confirmed to another Instagram user that the flowers she sent were meant for Lenny, despite what the RHOM cast member insinuated.

“THEY WERE FROM ME. Thank you. She tried to be slick and post them but NO ONE cares. I’m happy she saw them. And when I see her in real life I’ll be sure to let you know how it goes. Our drama is much deeper than your stupid Housewives blogs know. It’s way past Lenny,” she revealed. 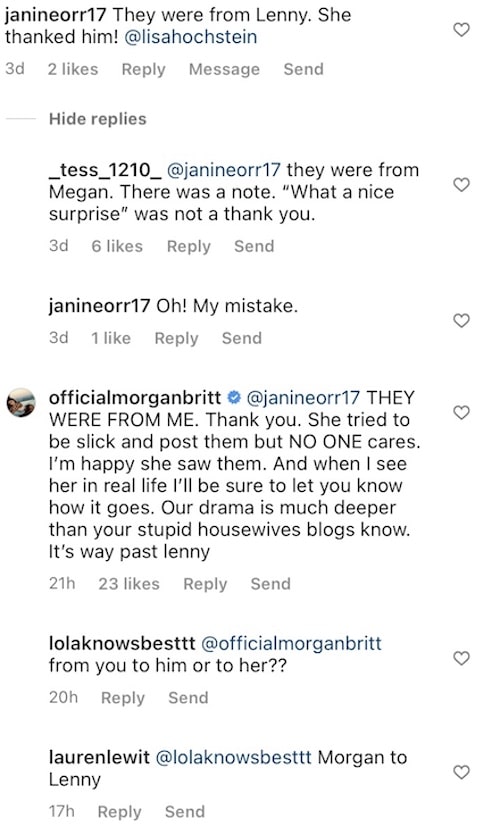 Also, in an Instagram comment, Morgan denied that her dramatics were the result of her wanting to be cast on RHOM.

“Morgan, who been on [two] reality shows probably wants to be on Housewives,” someone suspected.

“No. I don’t thank you,” Morgan insisted.

The Real Housewives of Miami season five is expected to begin streaming on Peacock sometime before the end of the year.