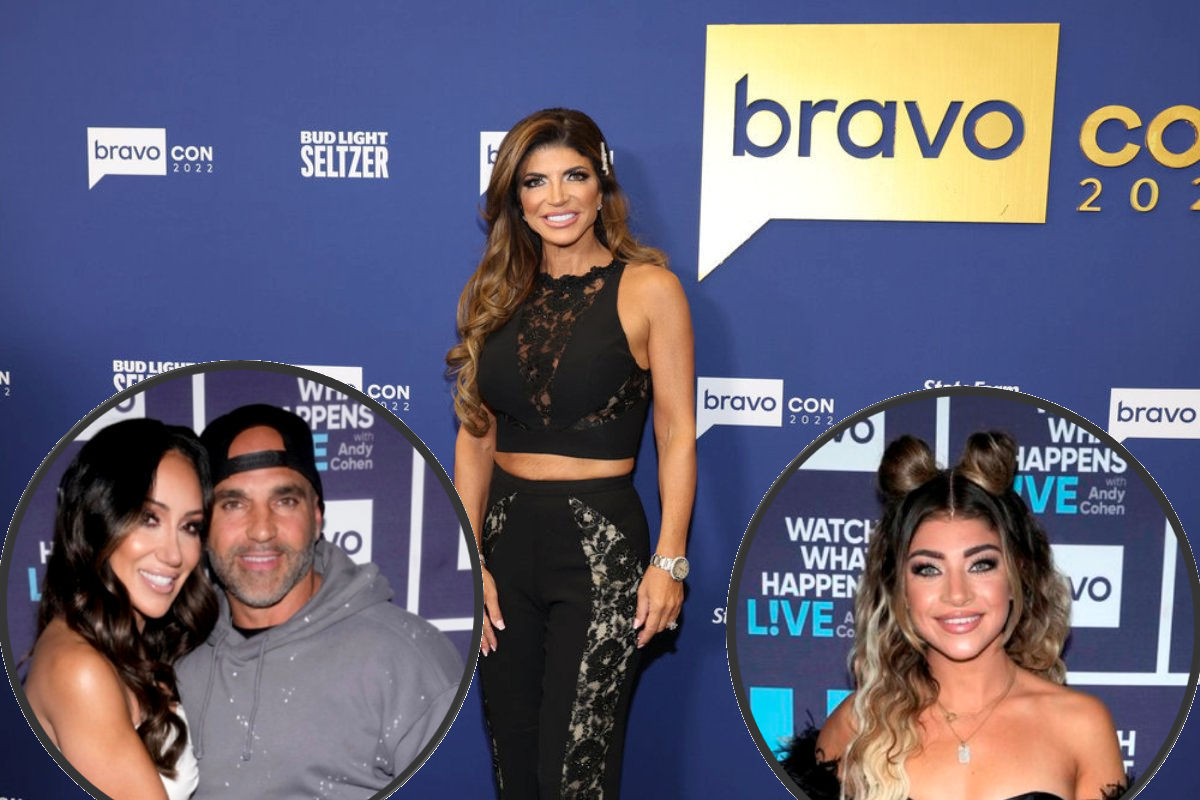 Teresa Giudice appeared on Monday night’s Watch What Happens Live, where she commented on her ongoing feud with her brother Joe Gorga and his wife, Melissa Gorga.

In addition to reacting to the Gorgas’ feud with Jennifer Aydin at BravoCon and being compared to Jen Shah, the Real Housewives of New Jersey star spoke of her mother seeing the Gorgas trash-talking her on the show, addressed Caroline Manzo‘s potential return, and more.

“[Gia Giudice], she unfollowed [Joe] on Instagram,” Teresa revealed on the December 5 episode of WWHL of what followed Joe’s suggestion that his comedy career would last longer than her marriage to Luis Ruelas. “He’s my brother. So hearing that was really hurtful to hear [but] I wish his comedy career is successful.”

As for Joe’s heated altercation with Jennifer at BravoCon, during which each party screamed profanity at the other in an NYC hotel lobby, Teresa said, “It has nothing to do with me. That was between them, and Jen can handle it. She’s fine.”

Teresa was then asked about the frequent comparisons between her and Jen Shah of The Real Housewives of Salt Lake City.

“I’ve never met her. It’s all up to the judge, right? And I just wish her well,” Teresa stated.

During a game of rapid-fire questions, Teresa confirmed the Gorgas did not get her a wedding gift after skipping her nuptials to Luis, which didn’t bother her, and she said the same of Real Housewives of New York City alum Ramona Singer, who infamously leaked her invitation on Instagram.

She also said Dina Manzo was the only former RHONJ cast member who reached out to congratulate her on her wedding and that “both” Jennifer and Dolores Catania were the “better bridesmaid.”

When host Andy Cohen brought up the fact that Teresa only recently began watching past episodes of the show, Teresa admitted that it hasn’t been easy.

“I watch it by myself and then I show [Luis],” she revealed. “I told Luis to watch it when he first met me just cuz I said, ‘I want you to watch it so you can just get a take on it.’ Because he was gonna come on [RHONJ]. Because he’s so smart so I wanted him to educate himself before coming out so he did. So he still like gave people benefit of the doubt after watching it.”

“Now that I’m watching it,” she continued, “it’s so hurtful. It’s so painful. And now I’m glad I didn’t watch it before because if I would’ve watched it, I don’t know what would’ve happened.”

According to Teresa, one of the hardest aspects of watching past seasons has been knowing her late mother, Antonia Gorga, saw the events firsthand.

“My mom was watching it the whole time and just seeing like what my brother and Melissa and even my cousin at the time were saying about me, [was] just so painful,” she stated. “[My mom never brought it up]. My mom I guess wanted to keep the peace. She knew I wasn’t watching it… It’s crazy now how the truth comes out like 10 years later.”

Later, on the WWHL: After Show, Teresa was asked if she spoke to Caroline at BravoCon and questioned about her thoughts on Caroline potentially returning to RHONJ.

“No we didn’t get to speak and if she comes back, whatever. It is what it is,” Teresa replied. “I’ll do my job and we’ll see what comes out of my mouth when she comes back.”

“Listen, I have nothing against her,” she continued. “I haven’t seen her in so long. Time heals all wounds and it’s been a long time since I’ve seen her. And if I do see her, I have no ill feelings towards her at all.”

Also on the live broadcast, Teresa was asked about her upcoming Christmas special, Fuhgeddabout Christmas, which premieres on December 21 on VH1.

Then, after Andy corrected her, explaining that it would be the Emmy Awards, not the Oscars, that she would be eligible for, Teresa said, “Okay so Emmys here I come.”