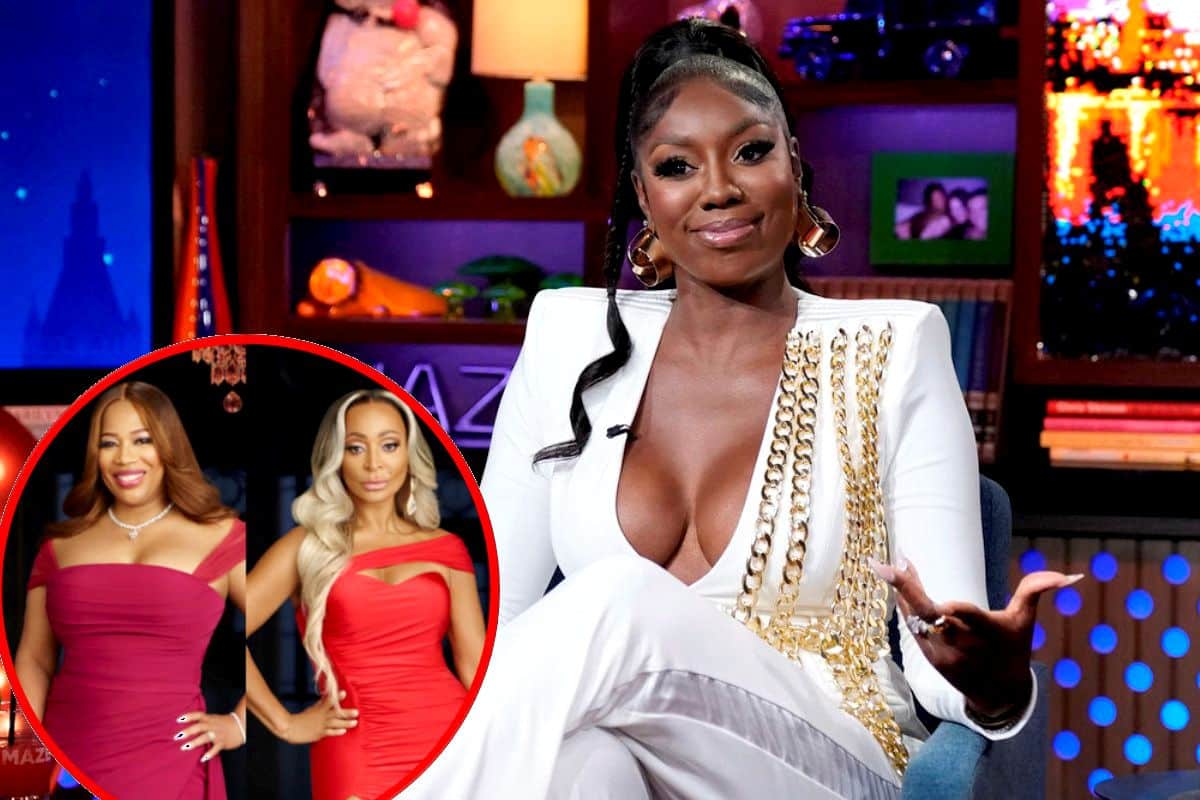 Wendy Osefo didn’t appreciate the comments Charrisse Jackson-Jordan made in regard to Karen Huger‘s alleged rehab stint on Sunday’s episode of The Real Housewives of Potomac.

After Charrisse suggested Karen had gone to rehab and partied immediately after, Wendy reacted to the shade on Watch What Happens Live as she also discussed impending rumors about Juan Dixon, Gizelle Bryant‘s suggestion that she is responsible for rumors linking her to Peter Thomas, and more.

“I don’t like that. I don’t think that’s funny. I think rehab is something serious. I didn’t like that jab. It was very private,” Wendy explained of Charrisse’s claim about Karen on the January 15 episode of WWHL.

And she also didn’t like to see Karen doubting Charrisse’s intentions for going to her mom’s funeral, although she did suspect the topic was “triggering.”

“I was confused because I would think that someone going to a funeral would be seen as a good gesture. But I think that is triggering for Karen because the mere mention of her mom by someone who is not her friend becomes questionable,” she noted.

As for Robyn Dixon and Juan’s potential prenup, Wendy responded to a question about whether or not Robyn had a good reason for wanting an infidelity clause.

In addition to rumors about Juan’s alleged infidelity, RHOP viewers have been met with rumors about Gizelle and Peter, which Gizelle suspected Wendy was responsible for.

“I think that that’s another form of her deflecting because if you do a quick Google search, those rumors were around before anything happened in Miami,” Wendy explained. “There were articles written about it. It was once she or Peter posted a picture of them at a fundraiser together, rumors started swirling. so it wasn’t me. I know she loves saying my name but it wasn’t me.”

Although Wendy was working on a potential business endeavor with Peter when production on RHOP season seven began, she shut down the idea of any future with the former Real Housewives of Atlanta cast member when asked for an update on WWHL.

Moving on to Mia Thornton and Jacqueline Blake‘s relationship, Wendy admitted it is “beyond” confusing and “heartbreaking.”

“I think it’s so wrong, especially since she brought Jacqueline to our circle,” Wendy said. “They’ve been friends.”

And when fellow guest Reza Farahan mentioned that Wendy had suggested Mia doesn’t know how to be a friend, Wendy asked, “Did I lie?”

Regarding the rumors claiming Karen was seeing other men, Wendy said she heard the rumors within the RHOP cast but not previously.

“I didn’t hear it prior to this group [and] I don’t believe it,” she confirmed.

“No, absolutely not,” she replied when asked.

When Wendy was then asked if Gizelle’s handling of Wendy’s fight with Mia, versus her reaction to Candiace Dillard-Bassett‘s feud with Monique Samuels, was hypocritical, Wendy said it “absolutely” was.

“I think that even Gizelle sat us all down, [and] said, ‘We have to rise above as Black women, we don’t do this.’ Remember she gave the whole talk? So if you’re against violence, then that correlates to all forms of violence,” she noted. “And then it’s even more apparent in this episode because you see them pressing Karen saying, ‘Everyone in this group is accountable for their actions,’ but you didn’t hold Mia accountable for her actions.”

Wendy also shaded Robyn, who she “temporarily” reconciled with, for recording her and Mia, but not Karen and Charrisse, amid their feud.

“I feel like she essentially told on herself, that she was not trying to help me, she was trying to actually be antagonistic by pulling that out and she shows that she doesn’t have the same rubric for all her friends,” Wendy noted.

Later, on the WWHL: After Show, Wendy was asked if she felt Gizelle and Robyn were defensive of Charrisse because she has dirt on them.

“I’ll go a step further. I think Charrisse has dirt on everybody, including Karen, to be honest,” she stated.

But when Andy asked if Charrisse has dirt on her, Wendy proclaimed, “She don’t know me!”