Home Southern Charm Southern Charm Cast “Disgusted” With Thomas Ravenel & Have Distanced Themselves From Him, Plus the Latest On Thomas & Ashley’s Relationship

Southern Charm Cast “Disgusted” With Thomas Ravenel & Have Distanced Themselves From Him, Plus the Latest On Thomas & Ashley’s Relationship 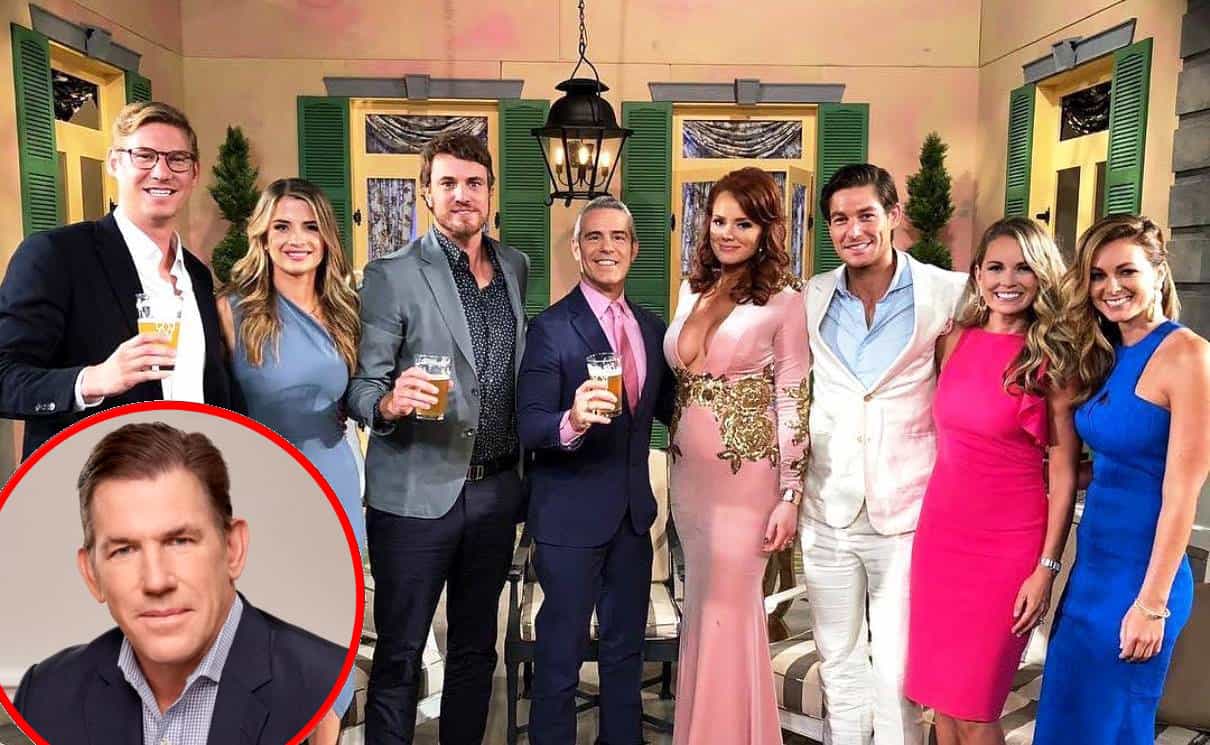 The cast of Southern Charm has distanced themselves from co-star Thomas Ravenel since filming season five.

According to a new report, Thomas’ former friends and co-stars, including Shep Rose, Cameran Eubanks, Craig Conover, and Naomie Olindo, have chosen to steer clear of Thomas due to his shocking treatment of Kathryn Dennis and his girlfriend Ashley Jacobs‘ behavior.

“He doesn’t have friendships with the [main] cast anymore — everyone is done,” an insider told People on August 8. “They’re disgusted with him and the way he and Ashley treated Kathryn this season. His eye-opening behavior and the drama surrounding those allegations caused a huge wedge in his friendships.”

“There’s too much dishonesty there, too much manipulation,” the source continued. “They’ve all just been keeping their distance.”

In addition to his and Ashley’s terrible treatment of Kathryn, the mother of his two children, Thomas has been accused of sexually assaulting two women over the past several months. Following those accusations, several reports came out stating Thomas had been fired by Bravo. However, the network has yet to confirm this news. Thomas was also notably absent from the recent reunion.

While the majority of the Southern Charm cast has all but cut ties with Thomas, Whitney Sudler-Smith and J.D. Madison have reportedly remained in contact with him, as has Kathryn. That said, Kathryn’s interaction with her former boyfriend may be based solely on the fact that they are currently sharing custody of their four-year-old daughter Kensington and two-year-old son Saint Julien.

Over the weekend, the Southern Charm cast showed their support for Kathryn as she celebrated a surprise 27th birthday party thrown by Patricia Altschul, Danni Baird, and Shep.

Missing from the bash was Thomas, who the insider claimed has been a “hermit” in recent weeks, choosing to stay holed up at his Brookland Plantation.

“He’s completely distraught over the allegations and what’s happened with the show,” the source explained. “He’s bounced back from scandal before, but this is much harder now that he has kids.”

As fans will recall, Thomas first made headlines back in 2007 when he was indicted on charges of cocaine distribution while serving as the treasurer of South Carolina. Following the bust, Thomas spent 10 months behind bars and also sought treatment in rehab.

Years later, Thomas found himself in trouble with the law yet again after a number of women, including his former nanny, came forward and accused him of sexual assault. Although Thomas quickly denied the claims, via his attorney, Bravo and Haymaker, the company who produces the show, launched an investigation and told press they “take allegations like these very seriously.”

“Once all the information is gathered and carefully reviewed, appropriate action will be taken,” they explained.

Meanwhile, there is further confirmation today that Thomas and Ashley are indeed back together.

According to a new report, they did break up recently but “immediately” got back together because being on and off is apparently the norm for the couple.

“They have been doing this a lot lately,” an insider told E! News. “It’s always up and down and they fight a lot. They find a way to lure one another back in.”

Amid reports that they have both been axed from Southern Charm, the couple is now reportedly trying to stay  “low-key.”

E! News also confirms PEOPLE’s report that the cast has shunned Thomas, but their source added that if he gets cleared of the allegations he’s currently facing, they would be open to mending their relationship with him.

“Many cast members are open to welcoming Thomas back if and when his name is cleared in the investigation and if he severs ties with Ashley,” stated the source.