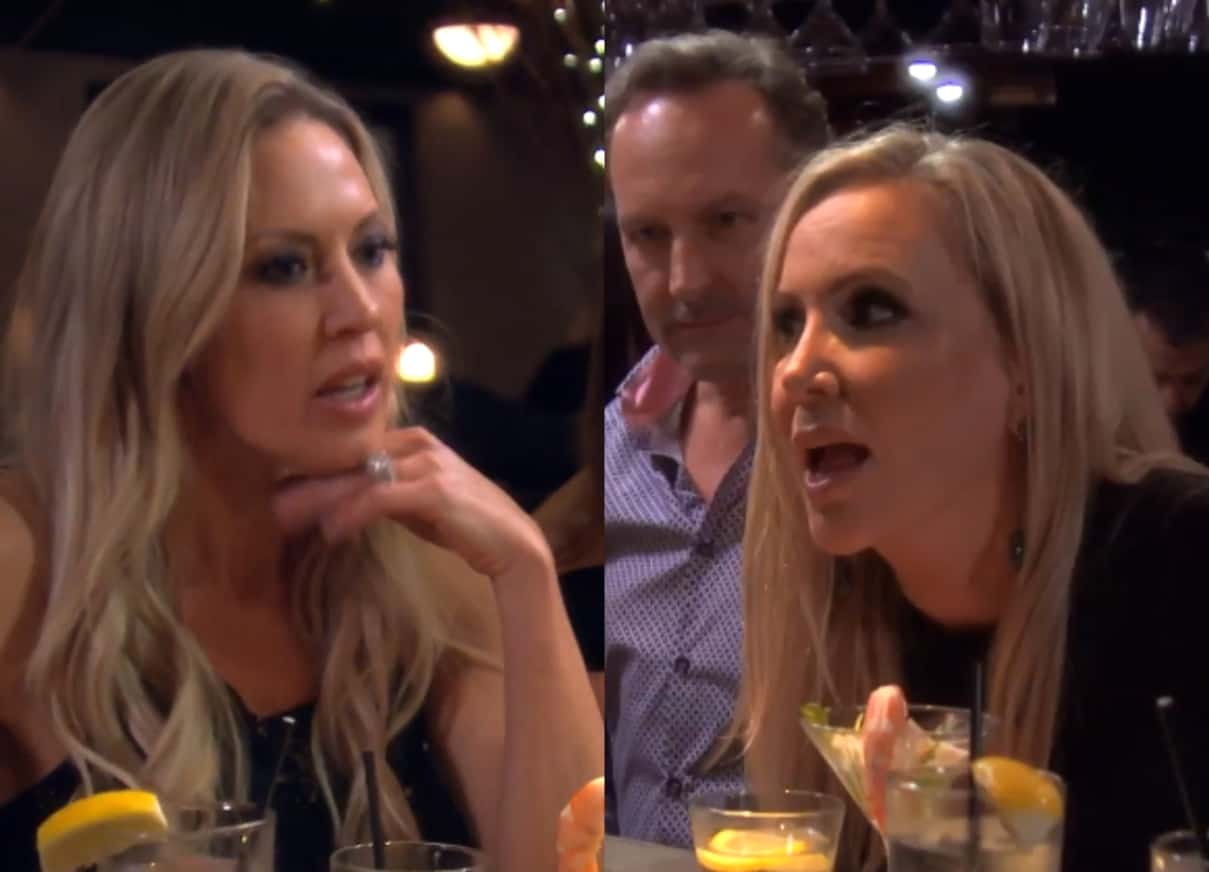 They’re baaaaack!! We lost OG Vicki Gunvalson as a “full-time cast member,” but we gained a younger, better, and way more fertile version of her in Braunwyn Windham-Burke on this season of the Real Housewives of Orange County.

An all-new season and an all-new house (again) for everyone’s favorite weight-lifting grandma, Tamra. Gina also has some new digs and a few new chinchillas, cause let’s face it, a house ain’t a home unless there are a few chinchillas. Emily STILL has no control over her children, and Shannon has shrunk half her body down. She has lost “forty pounds and gained a lot of fun.” Shannon is shredding with her daughters, and she’s actually pleasant and smiling these days. How refreshing!

Gina is rocking some funky extensions this season, and she’s trying a new tactic when it comes to raising her children with her “ex” husband, Matt. She has her very own house, which will inevitably get messed up in a matter of 12 seconds once her children arrive. Gina seems like she has her life together, but alas, snafu. Gina explains that at a “mom event,” she was “there shopping for leggings and drinking wine.” And BAM — Gina got herself a DUI. Homegirl has since found herself in a dark rut, but she promises to overcome this trying time.

Kelly got herself a new boyfriend. Don’t worry — he’s rich. Kelly is “officially off the market,” as she is currently dating Dr. Reagan (that’s how she refers to him…his first name is Brian if you want to be NORMAL and refer to him that way). And yes, she met him at the same place she got her “boobies done.” Sounds like romance to me! Kelly further states that this year, she and Shannon are besties. They’re going out on the town, and Kelly is planning on being Shannon’s wing woman. That sounds like a terrible idea…

Tamra is hosting her family at her gorgeous new home. She’s beyond proud to be in her new gated community, and she’s clearly moving on up in the world. The only issue she’s currently experiencing is a rift between her two sons, Ryan and Spencer. You see, “Ryan’s a fanatic Trump supporter and Spencer is the total opposite.” Tamra claims that she isn’t into politics, but it turns out that Ryan totally is a Fox News kinda dude. Because of the trouble between the brothers, Tamra feels a little uncomfortable and basically begs Ryan to bury the hatchet with Spencer. Sibling rivalry at its finest. And just a little drama to keep Tamra #Current.

Shannon and Kelly are on da prowl back at The Quiet Woman. You remember the place — the scene of the crime… when Shannon tossed a steak at Kelly. LOL. Isn’t there any other place these women hang out?! Shannon dives right into allllllllllllllllll of the guys that are on “her bench,” and it’s clear that she’s feeling herself. Kelly and Shannon chat about Gina’s DUI. They agree that getting a DUI is “the stupidest thing in the world.”

When they’re done judging Gina, Kelly explains that she has invited her friend, Braunwyn, to join them. You can tell that Shannon is wondering if this new chick will be competition as she stalks out dudes, like a man named “Babe.” But once Shannon finds out Braunwyn is a mother to seven children, she gives the green light. On cue, Braunwyn enters.

This chick has seven kids?! No. Way. First of all, she looks 30. Second of all, how does she find the time to steal away from her house o’children to have DRINKS with these two?! I am baffled. When Braunwyn explains that her mother is a homeopathic doctor, she’s bonding with Shannon at a whole new level. Seems like new Shannon is a little more open to admittance into her mean girls’ club, huh?

It was only a matter of time before we were forced to enter the boring world of Emily. Seems like Em is having a bit of a hard time as of late: “Shane is studying for the bar exam again….for the third time.” Emily states that she feels pretty overwhelmed with her three children since Shane isn’t quite pulling his weight around the house. Personally, I would be happy not to have him around…. But hey, I’m not the one married to him!

Kelly has decided to get a cat to try to battle the incessant rat problem she’s experiencing around her house. Gross. The issue is, Kelly doesn’t LIKE cats…so she really just wants a “farrow cat.” I think she means feral cat. DUH. Kelly decides NOW, at the Catmosphere cat adoption center, would be the perfect time to ask her daughter, Jolie, how she feels about her new boyfriend. This chick has issues about making everything about herself. Like, give the cats a minute to shine!

Gina and Emily go out for lunch, and it’s super awkward as Gina explains to her attorney friend that she simply made a bad choice regarding her DUI. Then, Gina further states that the night of the incident, her friend in her passenger seat had a “roadie.” Whoops. Gina is still very upset by her DUI, and she tells Emily how embarrassed she was to tell her parents. Apparently, Gina’s ex, Matt, has been “really supportive,” but Emily doesn’t hold back and essentially tells Gina it was a dumb thing to do.

Is it me or does Braunwyn look like an alumni of Dancing with the Stars?! This lady legit has seven children because “moderation isn’t” her “thing.” I don’t have a CLUE how she can remember all of the kids’ names, let alone THINK of seven names for her kids. Braunwyn isn’t even Mormon! She simply CHOSE to have this life. At least she has a supportive husband…. We learn more about this mystery woman. Braunwyn just recently moved back to the OC from Miami, so her kids could GO TO A GOOD HIGH SCHOOL. This is like next-level stuff.

Kelly’s new boyfriend enters the scene! When Kelly visits her personal doctor, she receives a “little something, something” from him, and I’m cringing as she opens a jewelry box, fully prepared for it to be a ring. Alas, it’s just a pair of diamond drip earrings. Phew — close call. Kelly thanks him half-heartedly and immediately changes the subject to Jolie. She’s pleased with the way Jolie accepts her relationship with Dr. Reagan, but she shares her concerns about her ex, Michael. Dr. Reagan just yeses Kelly to death, for the cameras I’m sure, and that’s pretty much how I see this relationship going. That’s show biz!

I think it’s hilarious that while Kelly is visiting her main squeeze, she’s just getting some Botox like it ain’t no thing. Meanwhile, Tamra and Shannon walk into Dr. Reagan’s office. It’s apparent that Shannon has been getting a lot of procedures done lately because her face doesn’t move when she smiles. The women sit around as Shan gets poked and prodded by Dr. Reagan, and no one even blinks. How is it okay that everyone’s just getting Botox and it’s just so…normal?

Whilst Shannon is getting plumped up by the needle, Tamra explains that she’s thinking of having a housewarming BBQ, but there’s one caveat. Tamra asks Kelly if it would be okay if she invited Vicki — that’s right, THE Vicki — to the party. Kelly is still mad at Vicki because she spread a rumor that Kelly did cocaine. Tamra knows that there’s potential for some drama to erupt at her party.  That’s *exactly* why she’s inviting Vicki. We all know how much Tamra loves to stir up sh*t. I see right through you, Tamra Sue! What will happen when the “tres amigas” reunite, and will Vicki keep her distance from Kelly this time around?? Stay tuned!

TELL US – THOUGHTS ON THE RHOC SEASON PREMIERE?