RHONY Season Premiere Recap: Dorinda and Tinsley Get Into a Fight and the Ladies Don’t Miss Bethenny! 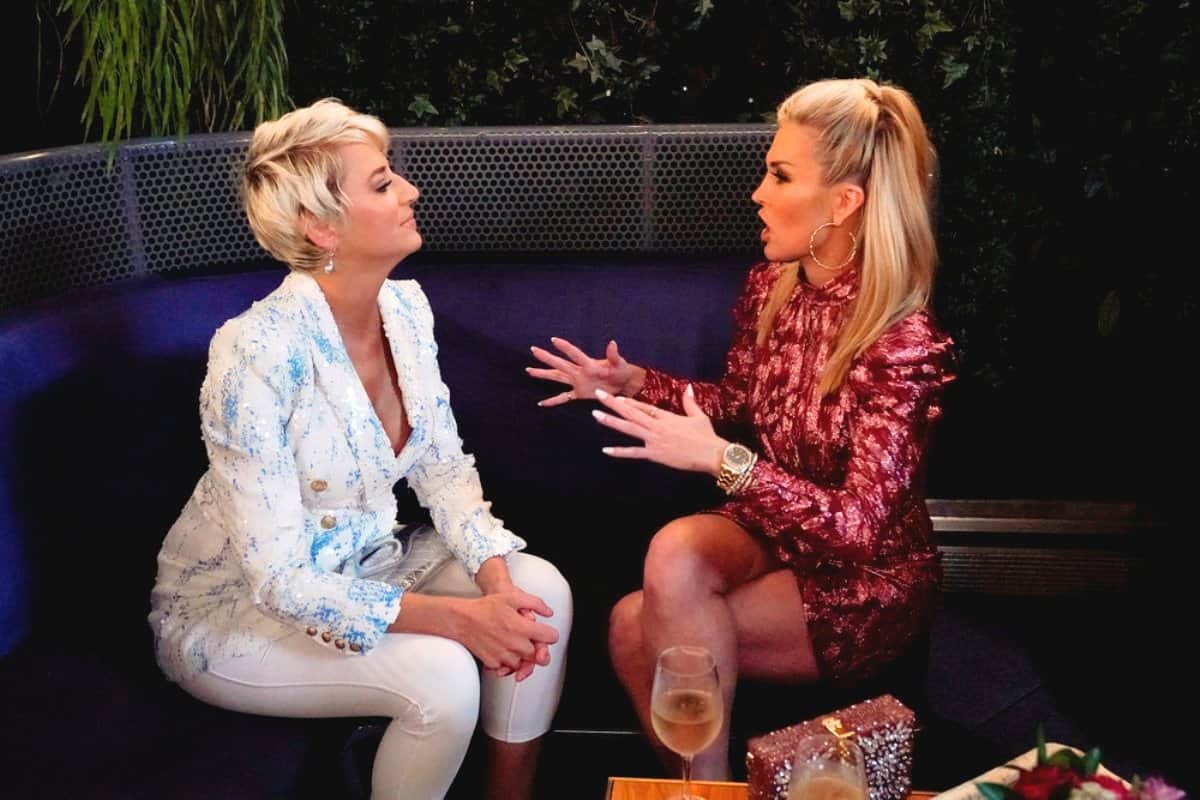 We have all been anxiously awaiting the season 12 premiere of the Real Housewives of New York City! I think we need a good diversion from our reality right now. The preview for this season looks like it will be a lot of fun to watch. Let’s dive in for a healthy bite of the Big Apple!

Before the taglines, we begin with the breaking news that Bethenny will not be returning to the show. Ramona looks glad that she is gone since she doesn’t like anyone else usurping her and calling her on her sh**. Luann looks relieved that she won’t be called insufferable anymore. At least to her face anyway! Dorinda seems like she actually misses her, or is she afraid she may take attention away from the show?

Sonja meets Luann after her last visit to her probation officer. We get another glimpse of how she acted like an obnoxious twit to the Palm Beach cops. I have to admit Luann does look fabulous despite being such an arrogant troll last season. Sonja, I am with you, sister, about the fries.  That is a major infraction when Luann forget the darn truffle fries when you were in Miami. It is great hangover food and around this group that is a necessity!

Tinsley is meeting up with our new housewife Leah at a boxing studio. I wish the friendships would be more organic than this. It is clear that these two just met and barely know each other. The trainer looks a little frightening. He reminds me of the guy who swings around the chainsaw from the movie Texas Chainsaw Massacre.

Tinsley is dating a guy named Bruce who has three kids and two ex-wives. She thinks caring for kids is like being around dogs. Tinsley thinks you can talk to kids just like dogs. Hmm, bless your heart, not the same thing, sweetie.  She might want to just stick to mothering fur babies.

Dorinda has John over for dinner. She tells a story where she was learning dance moves with DWTS’ Carson Kressley. She fell and broke a rib. Dorinda is opening the door to the fact that the bloom may be off the rose with John while she recovered. This closeness might be a deal-breaker for her. I don’t think John sees the break up writing on the wall though. Sigh.

They discuss Luann and how she has transitioned back. I agree with John that Luann acts like she is the first person to go to rehab. It appears they have mended their relationship .

Ramona meets up with the infamous Missy and the new “friend” Elyse for a drink. There is some new lecherous guy at the bar named Mitchell who is the new Harry Dubin. Ramona orders her cocktail in such an obnoxious level of detail. She must be a total nightmare to wait on.

Ramona is so full of herself, and for some reason, she thinks she is a good dancer. She likes to post dance videos of herself. Ramona reminds me of Elaine from Seinfeld who is totally unaware she has no rhythm. She doesn’t realize people are laughing at her and not with her.

Ramona cries over being alone and claims she is practicing escapism. She reminds me of Tamra from RHOC with no tears. Boohoo, Ramona. I’m surprised with all of her “dates” last season she doesn’t have a guy in her life. I have to make an observation. She has never gotten over Mario. Every time she is on screen she is showing off her new assets and showing Mario what he gave up. Just get back together already!

We meet Leah and her 12-year-old daughter Kier aka Kiki. Oh boy, another mom who thinks her daughter is her best friend. We are going to have another relationship where the daughter mothers the mom. Leah claims she also is best friends with her daughter’s dad Rob. I am getting don’t want to grow up vibes from Leah.

Dorinda is planning an “End of Summer” party since she likes to make nice. She is also sporting a new hairstyle. I am kind of unsure if I like it or not. Dorinda’s job this season must be she is gunning for Tinsley. I don’t get why Tinsley has a target on her back. Is it jealousy over her youthfulness?

Tinsley is getting her hair done for Dorinda’s party. She is discussing her relationship with Scott. The other ladies, specifically Dorinda think she doesn’t share her life with them. I think she does but there is something else going on here.

Tinsley and Leah pick up Sonja. You can see how Leah got cast this season since Bravo is looking for some new young blood. She gives me Sonja vibes. We are introduced to William who I guess will be like the red scarf guy from last season. We are led to believe he dated Ramona. Come on now, this is ludicrous! She must be his sugar mama.

Leah quit drinking for nine years and she claims she used to be reckless when she drank. Leah apparently will be the new stumbling drunk this season. Bravo is definitely trying to age out the OGs with this new young blood.

I love how Ramona walks in checking out the room. She is clearly scoping out the room for potential dates. Everyone comments on Dorinda’s hair. Countess Luann thinks she went to jail because she had a drink. Nope, that little assault on a police officer might have had something to do with your situation. Just own it, Luann, for god’s sake!

Dorinda has a special guest who coincidentally is a drag queen who comes out singing “Feeling Jovani.” She is definitely making nice with Luann this season. Leah has to Google Jovani, which surprises me since she claims to be a New Yorker. I don’t live in New York and I know who the designer Jovani is.

Leah discusses her arrest in 2002. She was making out with a guy and the cops broke it up. It appears she is leaving out part of the story since the cops just start beating up her guy for no reason. She throws a water bottle at one of the cops. They literally knocked her teeth out.

Leah sued the cops and used the money to start a new business. Coincidentally, she called her clothing line Married to the Mob. How original! She will be another Luann with her selective memory.

Dorinda and Tinsley are chatting over nonsensical bullsh**. Dorinda’s self-tanner is super distracting. They are still arguing over Tinsley’s relationship with Scott. It is almost like the reunion conversation from last season part two. Why does Dorinda even care how many times she breaks up with Scott? She believes she is a riddle that no one can solve.  Riddle solved! Maybe Dorinda is a little jelly that Tinsley bagged a rich guy?

Sonja calls William the guy with the jeans full of magic. If he has magic in his pants what would he be doing with Ramona then?  I agree with Leah and her description of the type of lover William would be. Lol, he probably couldn’t find a clitoris unless you drew a diagram for him. He is clearly a player and looking for camera time.

There is a totally stupid argument over Tinsley’s arrangement with Scott. It is really ridiculous. Dorinda is really gunning for Tinsley and being aggressive in this first episode. Leah is funny, she thinks Dorinda is like the snake from Beetlejuice. I might be kind of liking her so far with her one-liners…

We have a lot of kooky shenanigans to look forward to this season. The clips include a lot of drunken antics and make-out sessions. Leah might be a good addition to this show, but will you miss Bethenny?  Time will tell, but I will definitely miss her snark. See you all next week and stay safe!