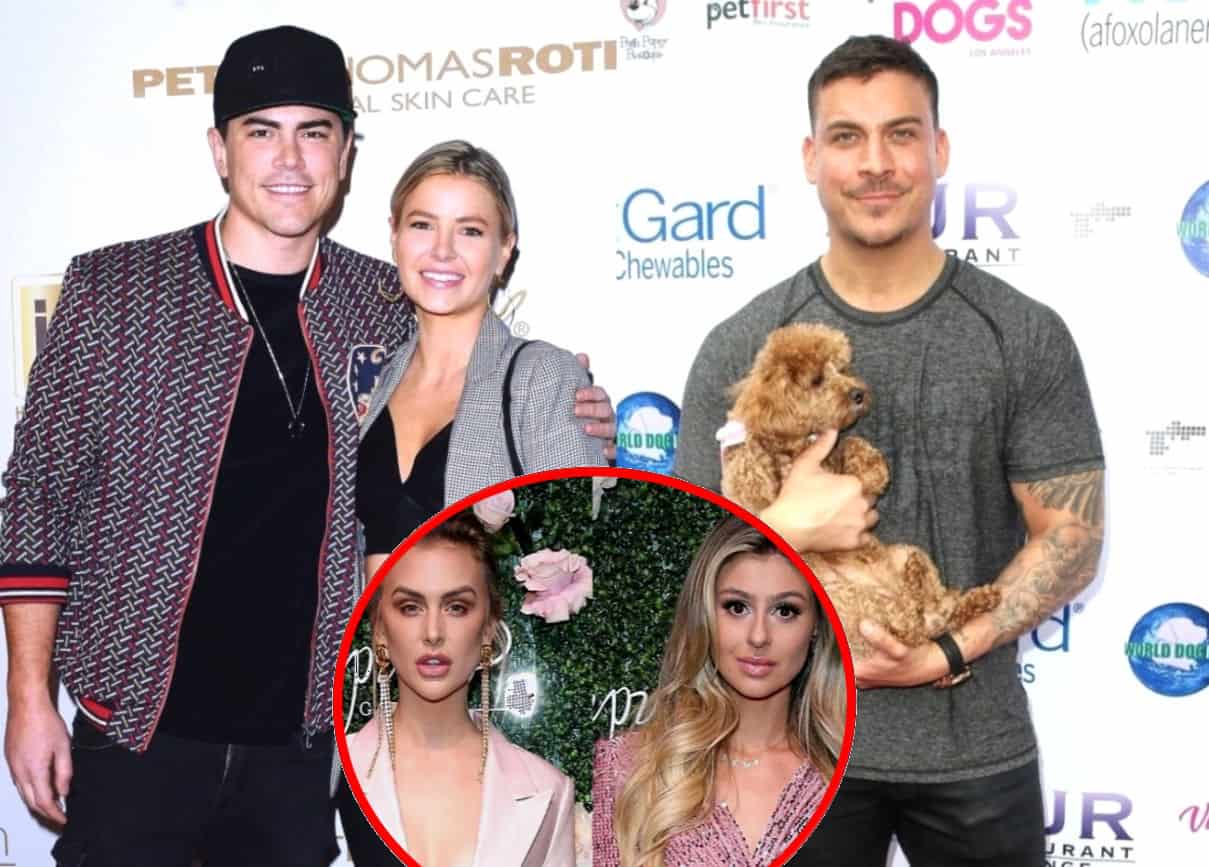 Ariana Madix and boyfriend Tom Sandoval called out Jax Taylor for his recent lies and revealed where they stand with him today during a recent podcast interview.

While appearing on the most recent episode of their Vanderpump Rules co-star Scheana Marie‘s podcast, Ariana also opened up about the ongoing feud between Lala Kent and Raquel Leviss, but first, Sandoval addressed his ongoing feud with his former best friend which took him by surprise considering they actually had a great time at Jax and Brittany Cartwright‘s wedding last June.

“Me and him were hugging it out. Jax was like, ‘Dude, you did so much for my wedding I really appreciate it.’ I was like, ‘Jax, it was my pleasure man, I’m so glad you had a good time,’” Sandoval recalled.

Meanwhile, on camera and in several recent interviews Jax has been bashing Sandoval and suggesting he wasn’t a good best man and only acted as an over-the-top best man because cameras were rolling.

As Pump Rules fans may have seen, Jax has said on several occasions that he hasn’t spoken to Sandoval since the wedding, even though they’ve been spotted together plenty of times since. As Ariana explained, Sandoval and Jax were together at BravoCon in November and also spent time together after the People’s Choice Awards that same month.

“Brittany and Jax, their house was the pickup spot [for the PCAs] so we ended up staying there until 4 a.m. I had such a good time,” Ariana shared. “It was really amazing and this was after we stopped filming. Jax keeps saying he hasn’t spoken to Tom, like, there’s pictures of us all together.”

As for where they stand with Jax today, Ariana made it clear they are no longer in touch before revealing she doesn’t miss their interaction and slamming him for commenting on her sexuality.

“I certainly don’t feel that I’ve lost anything and I think it’s kind of gross to comment on anyone’s sexuality,” Ariana said.

Looking further into Jax’s odd behavior in recent months, Ariana said she believes Jax has been extra aggressive towards her and Sandoval because he sees that a lot of Pump Rules fans have taken their side.

“If someone sees that the person they were being a d**k to, that people on the internet are siding with that person, then instead of going, ‘Oh maybe what I was saying or doing was f**ked up,’ they want to justify how and why they were a d**k so they’ll double down on why you deserved that sort of [treatment],” Ariana explained.

Ariana also looked back on the way in which Lala spoke degradingly towards Raquel and told her to know her place.

According to Ariana, she felt that if she stood near Raquel, who she described as non-confrontational, Raquel would feel supported and be able to speak her mind as Lala berated her and warned she was a Michael Vick “fighting dog.”

Following Tuesday’s episode of Pump Rules, Raquel appeared on the Pump Rules: After Show, where she suggested Lala behaved in the way she did because she believed, incorrectly, that she was better than her. Ariana seemed to agree and added that Lala appeared to be projecting her own issues on Raquel.

“I just remember earlier on in the season, Lala was on this ‘Ariana thinks she’s better than everybody’ thing. She kept saying it to other people,” Ariana recalled. “Her and I had this conversation in Miami. She pulled me aside because she really needed to tell me how I think I’m better than everybody and I was like, ‘I haven’t talked to you in months I don’t know what you’re talking about.'”

“Then fast-forward she’s telling Raquel she needs to know her place. Are you kidding me? I guess I thought it was a projection because that whole season she had been saying I think that and I’m like, ‘But you are literally saying that,’” Ariana noted.

Also during the interview, Ariana revealed she’s been cooking and gardening amid the ongoing quarantine in California as boyfriend Sandoval enjoys drinks and music while also plotting a secret passage and a throwing area at their $2 million home.