Braunwyn Windham-Burke Says She Got Offer to Join RHOC on Instagram! Teases “Intense” New Season, Offers Marriage Advice, and Reveals if She Plans to Have More Kids 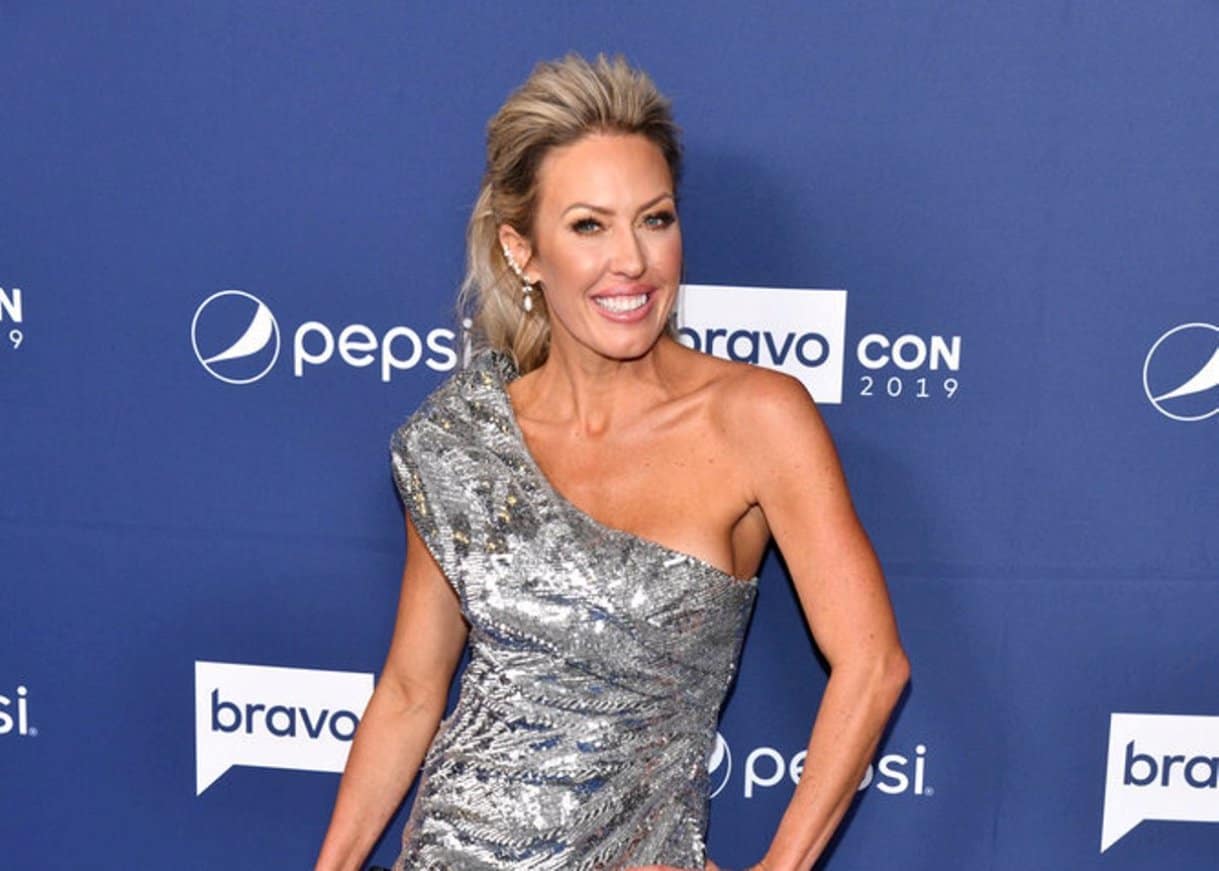 Braunwyn Windham-Burke hosted a Q&A on her Instagram Stories, and during her chat with fans, she dished on her family life and the show on which she stars.

After first teasing the upcoming 15th season of The Real Housewives of Orange County and explaining her life’s purpose, the mother of seven offered marriage advice, revealed if she and husband Sean Burke plan on having more kids, and explained how she was cast on the Bravo reality show.

A fan wanted to know how Braunwyn landed her full-time role on RHOC.

“My Instagram…..I legit manifested this,” Braunwyn responded, along with a laughing-while-crying emoji on June 28. 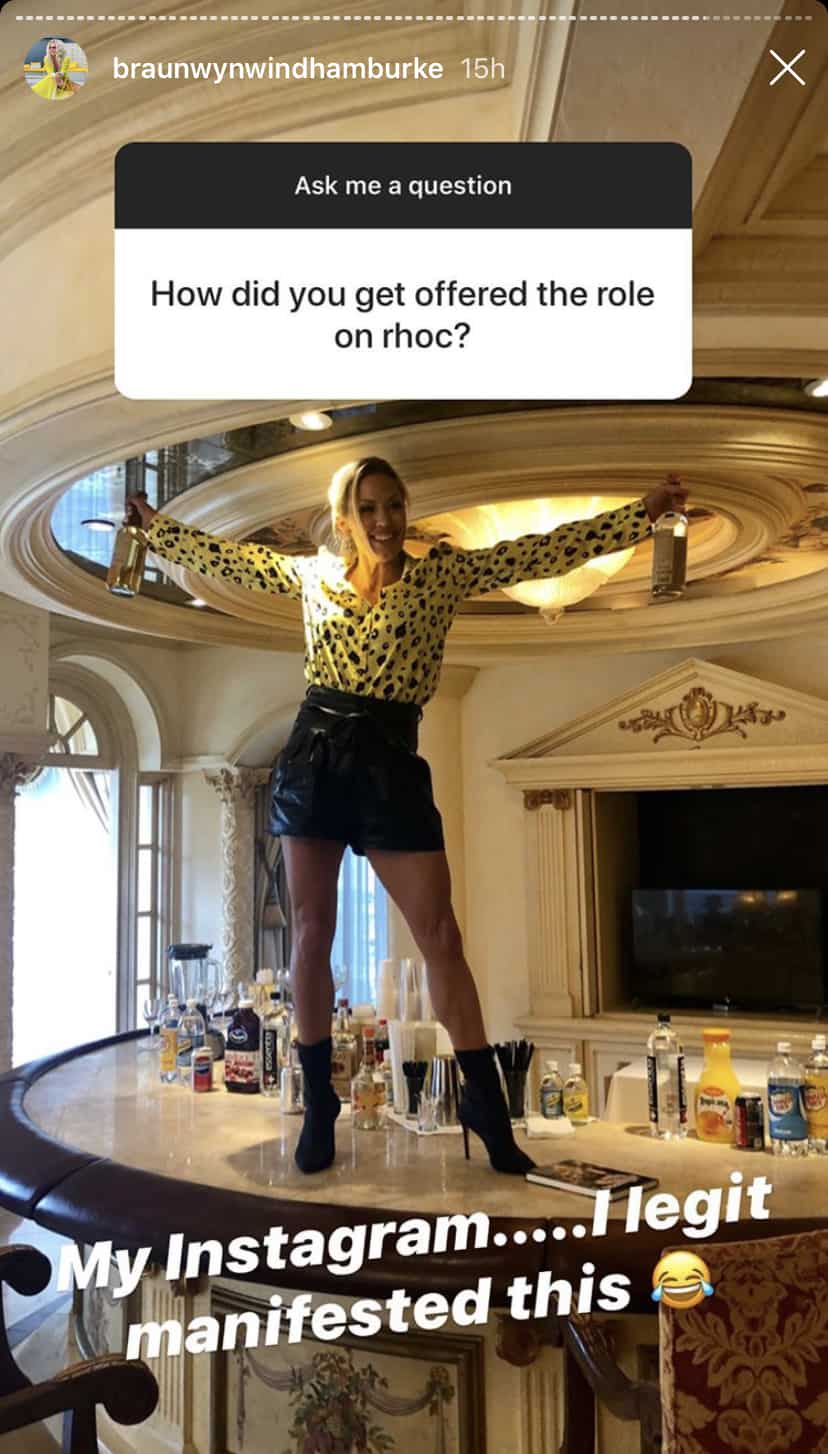 “What do [you] expect from this season of [The Real Housewives of Orange County]?” another fan asked.

“It’s a very intense one for me. I think we get back to the roots of Housewives, real women with real lives,” Braunwyn replied.

RHOC season 15 began filming in February but was shut down weeks later due to the spread of COVID-19 in the area.

Since then, Braunwyn has been focused on educating her online audience about the Black Lives Matter movement while also attending protests in Orange County. Moving forward, Braunwyn plans to continue to do her part in making a positive change in society.

“What do you think is your life’s purpose?” another fan wondered.

“To support other women, to take away the stigma of mental illness, and to show people it’s okay to be yourself and love yourself just the way you are,” she shared. 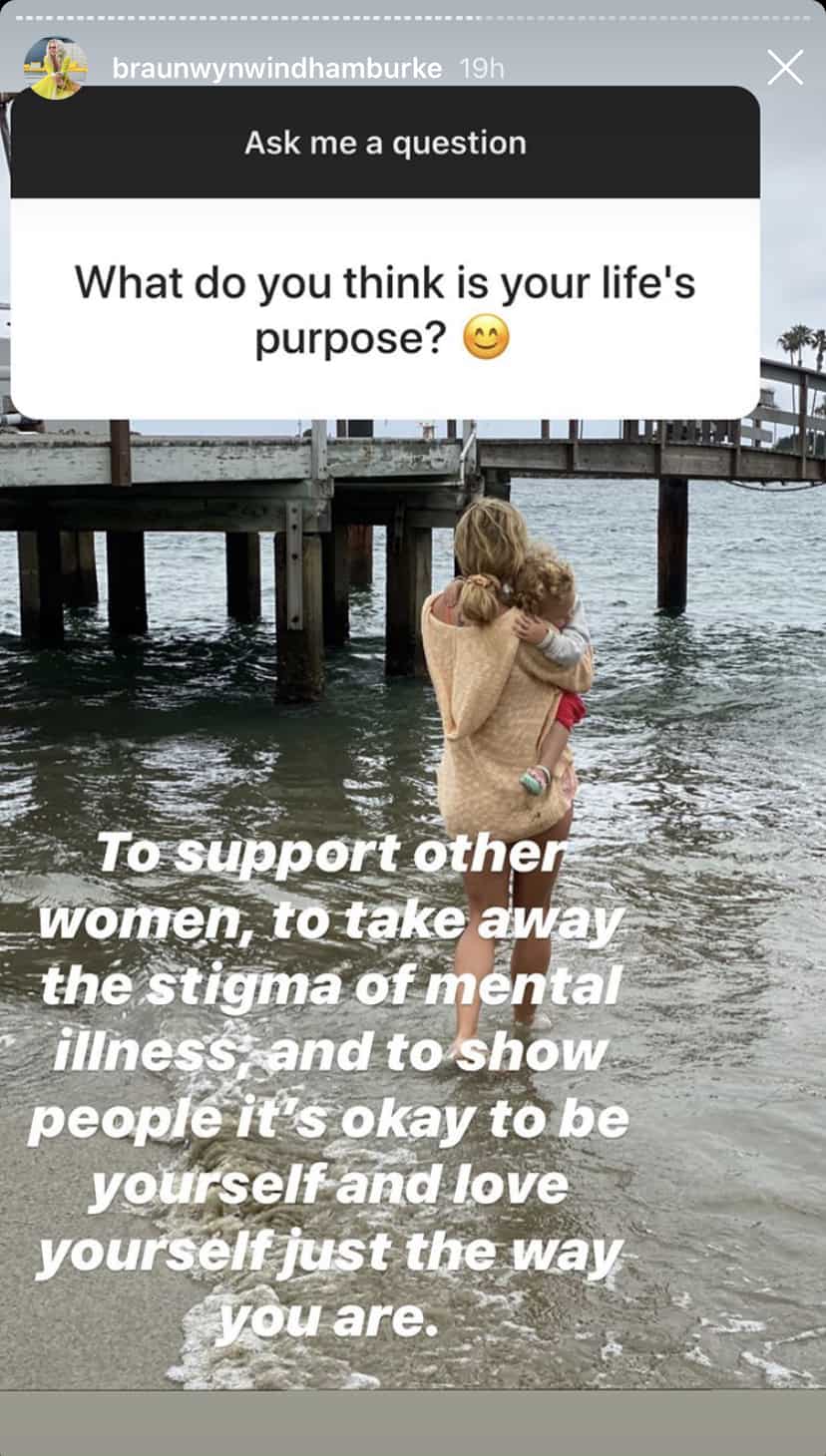 Braunwyn then responded to a woman who wanted some marriage advice after getting engaged.

“Communication, remember you fell in love with a person, not an idea. Enjoy the good times, get through the bad. Don’t compare yourself to what you see on social media, everyone is lying. Marriage isn’t easy, it takes work, even after 20 yers we’re figuring it out,” she wrote. 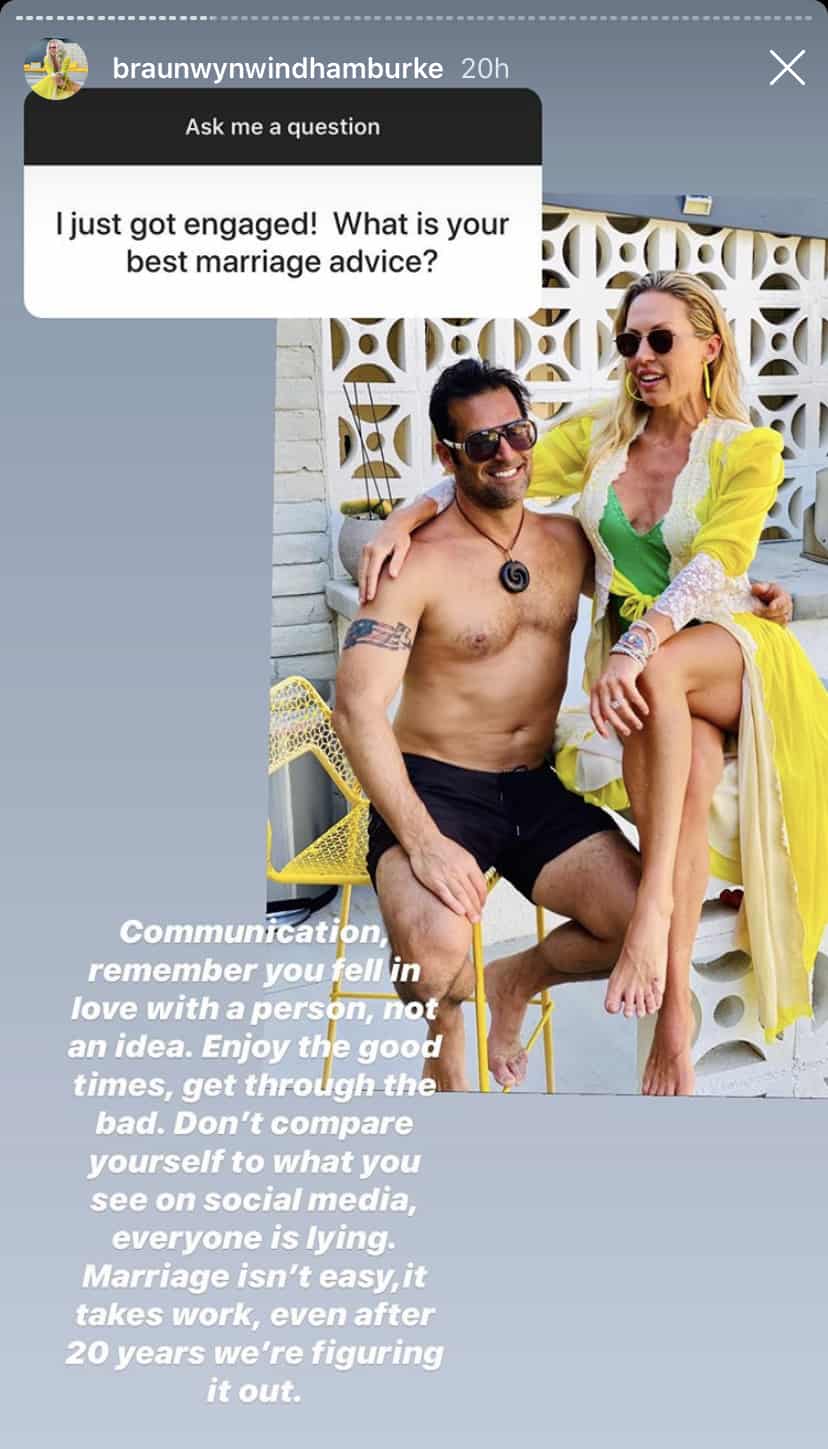 Braunwyn and Sean recently celebrated their 20-year marriage anniversary, and while Braunwyn has made it clear that she loves having a large family, she and Sean have decided that seven children are enough.

“Nope. Hazel is our last, we should have a ton of grandkids though,” Braunwyn revealed. 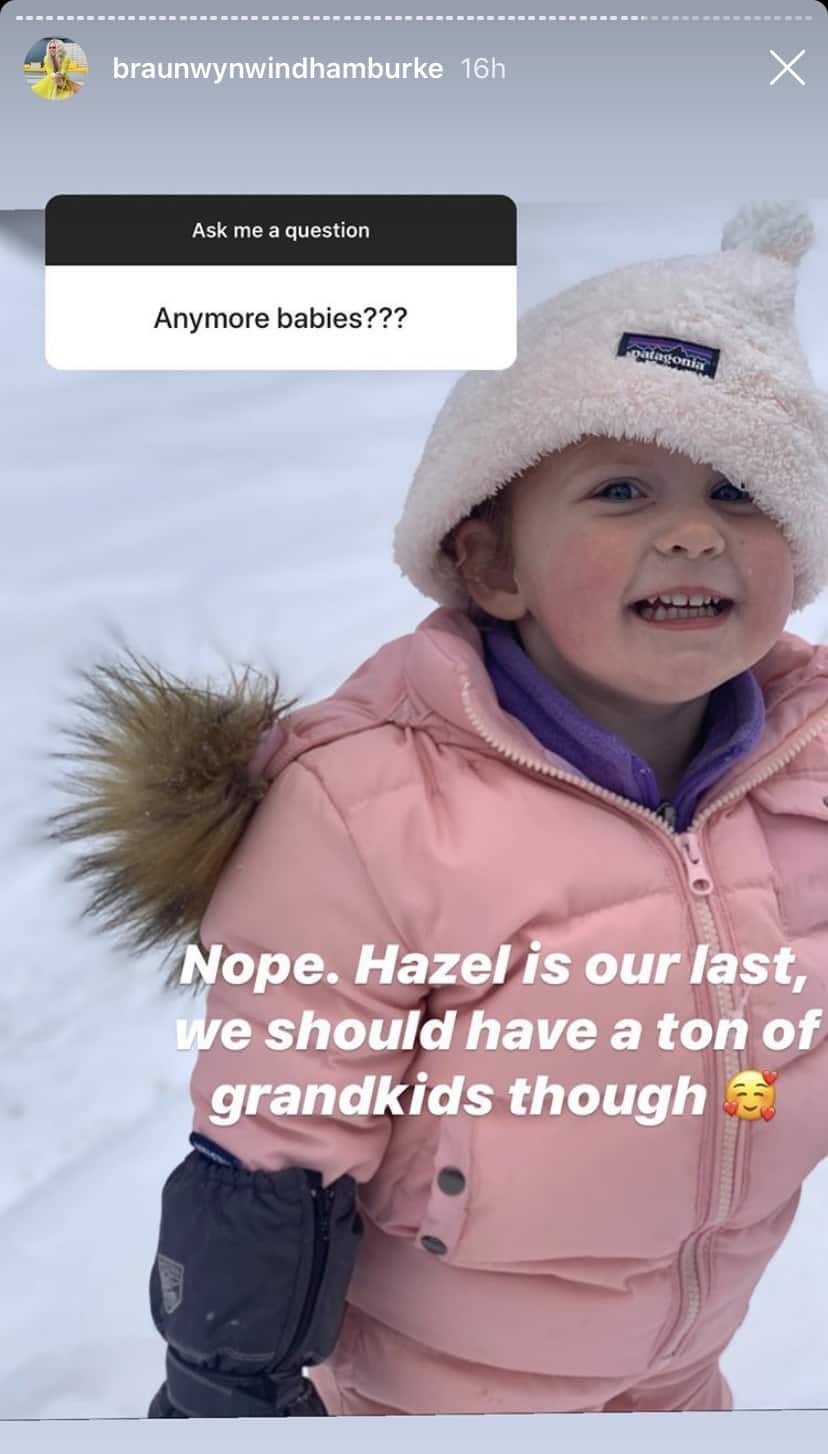 The Real Housewives of Orange County‘s 15th season is expected to resume filming sometime in July.