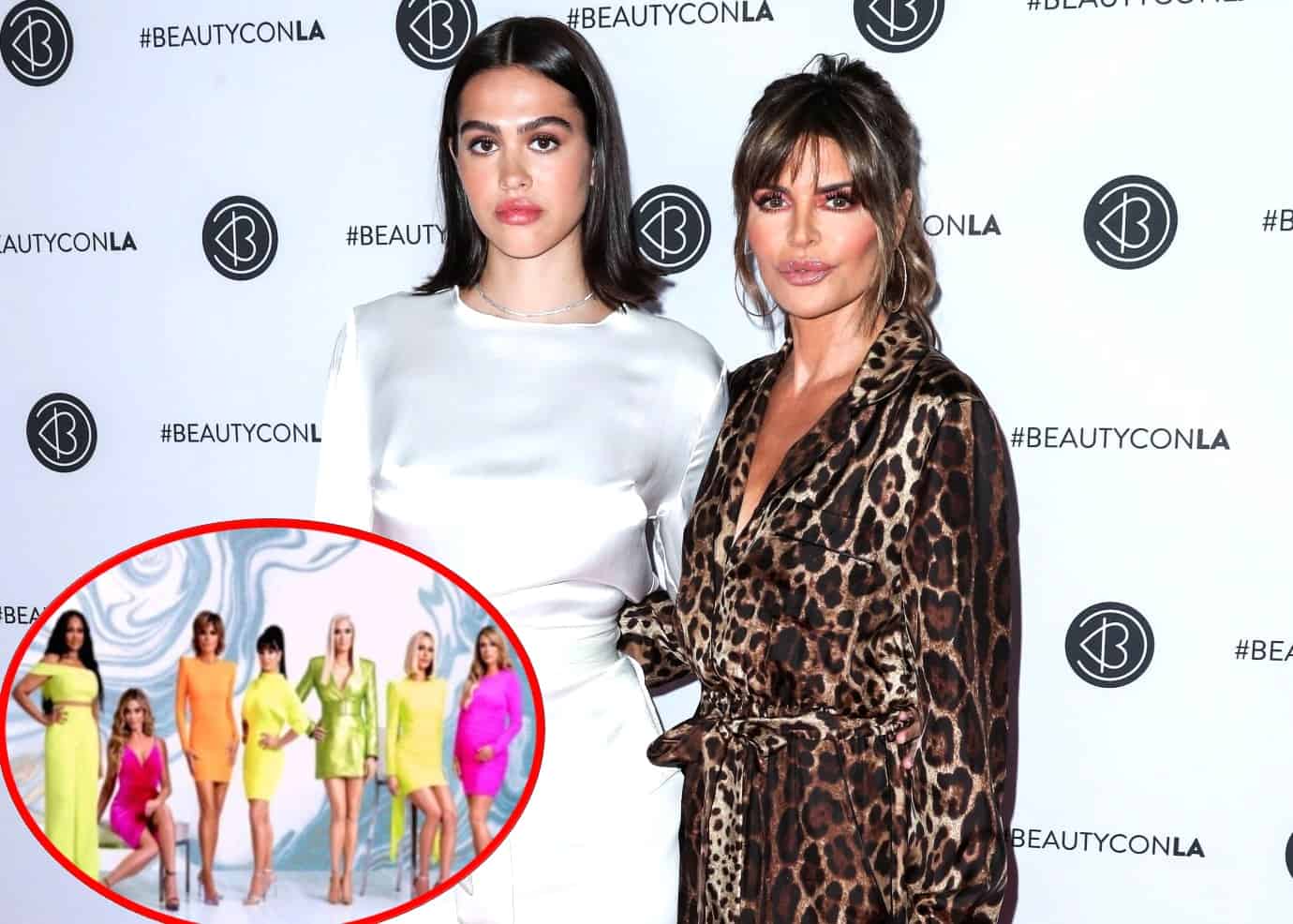 Amelia Hamlin, daughter of The Real Housewives of Beverly Hills star Lisa Rinna, has had to face some challenges being in the Bravo spotlight.

In a new interview, the 19-year-old opened up about her experience on the show, how she feels about her mom’s racy dancing videos, and how her family has “[nothing] to hide.”

“My sister [Delilah Belle] and I just moved in together and for the past three weeks we have watched [the show] only because I’m sitting on my couch, I’m having dinner, and all of a sudden my f–king Instagram will be flooded with like, 100 comments, 200 likes, just going at me. I’m like, ‘What did I say?'” she revealed to The Skinny Confidential Him & Her podcast on August 25. “Then I’ll have to re-watch it, because my mom doesn’t tell me, ’cause she doesn’t want me to get stressed out. Today she was like, ‘So tomorrow you’re on the show — don’t worry though, it’s okay, don’t talk about it, don’t comment on it,’ and I’m like okay, I won’t … because I do struggle with biting my tongue at the same time.”

The model shared that she doesn’t “usually get a lot of hate,” but she is experiencing an unfortunate influx due to the show. Considering some of her comments about the show and her sort of feud with RHOBH star Garcelle Beauvais over things she said to her mother, fans have started to come for Amelia — but she insists she’s unbothered.

“I am [getting a lot of hate] right now because of the Housewives and I will tomorrow because I tell Garcelle to f–k off, but … I just have to remind myself, ‘You’re a really nice person,'” she stated. “My motto is ‘Kill them with kindness.’ I think it’s the most attractive thing ever to be kind. I’m nice to pretty much everyone, unless you’ve done something really bad to me.”

Garcelle’s critique of her mother Lisa’s dancing videos — and relating them to Amelia’s eating disorder — is what really set Amelia off, and she continues to defend her mom against it. For Amelia, Lisa’s free-spirited behavior was part of the norm at the Hamlin household, as she described Lisa never wearing makeup leaving the house — a sharp contrast to the other upscale moms of Beverly Hills.

“But not only would she not wear makeup, but I would have my friends over and my mom would walk downstairs in her full-on thong, white shirt, nipples out, and I’d just be like, okay … but I wouldn’t think anything about it because it was normal, it was what my mom did,” she revealed. “Now I look back and [think], ‘F–k, my friends must have been so uncomfortable.’ But that being said, I think I was just brought up around someone that does not give a flying f–k.”

The teen also shared that Lisa’s dancing on Instagram never even crossed her mind as something “risqué” or controversial, considering her upbringing.

“Like I said, my mother used to walk downstairs with her t–s out and her butt out when my friends would be over — boy or girl, didn’t matter what friend was there,” she shared. “Now she’s dancing with her bikini on, that’s just lovely, but I’m so sorry, and I’m trying not to be a b–h about it, but it really gets me worked up because my mom is such a genuinely sweet and loving soul and she would never do anything to hurt a fly and I think being a mother and being told by the world that you’re the reason your child went through the hardships that she did like … that’s not gonna be easy on anyone.”

Amelia also shared that, perhaps in contrast to other Beverly Hills families, the Hamlins are an open book, so defending her mom against haters or being real on camera isn’t exactly nerve-wracking.

“My family … we don’t have anything to hide, so it doesn’t really stress me out. But I feel like when you’re spending so much time and effort on trying to contain your lawsuits or your secrets or whatever you need to contain … that’s when it gets crazy,” she said. “I also feel like there’s so much more good than there is bad, especially with my mom and our family. I feel like we present and have a lot better feedback than bad feedback.”

Although she has no issue defending her mom, Amelia faces a little more anxiety for herself, noting her passion for being a model and the pressures she faces in the industry.

The teen explained how the “culture of Instagram models” makes her “so angry” considering her enthusiasm for the elements of design and the actual “art of the clothing.” She shared how hard the industry can be, considering her four years of “trying to be this high-fashion model” and her already wanting to give up.

“I had a conversation with my friend last night, I was feeling kind of down, and she was like, ‘Where you are is where you’re supposed to be and you cannot compare yourself to the Kylie Jenners of the world who are 23 and have a billion dollars in their bank account. It’s just not reality,'” she remarked. “You are where you’re supposed to be and that’s that. I just think it’s really hard being compared to situations that I’m not close to and I’m working very hard to get to.”