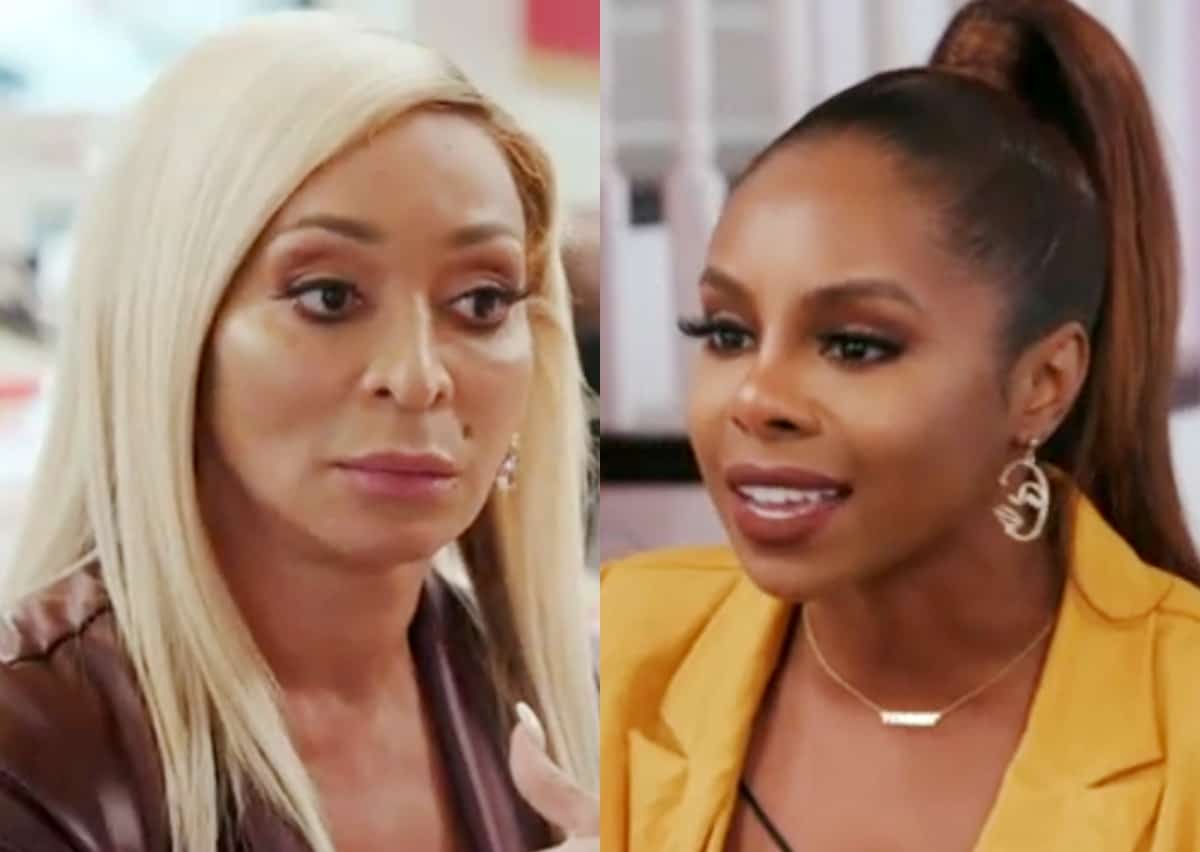 On this week’s episode of the Real Housewives of Potomac, how will the ladies move forward after Candiace filed charges against Monique? Let’s watch and try to sort out this tangled web of friendships!

In our opening scene, Gizelle is pretending that she might be 10-carat diamond wedding ring shopping. She is trying to convince us that Jamal is going to buy her this diamond to make up for his indiscretions. What a joke that is! She can’t even get the guy to live in the same city or give up his, ahem, extracurricular activities.

Juan, who is allegedly there to ring shop with Gizelle, arrives to help choose a wedding ring for Robyn. Wow, he has a budget of $10K? Where did all of that money come from? If it does exist, is it buried in the backyard so Robyn can’t find it to pay her taxes? Production then shows a clip of Robyn having her son film a sales clip on an iPhone for her not-so-original leopard hat company. I think these two need a real reality check and not the one from Bravo! They shouldn’t be making large purchases such as homes and diamond rings UNTIL they get their darn taxes paid.

Juan likes the morganite stone ring, which is beautiful and below his budget. Honestly, I won’t believe this wedding will happen until we see the license. Gizelle and Robyn are really trying to push these faux marriage storylines down our throats this season.

Monique is back this week and planning her “Not For Lazy Moms” live podcast. She discusses what has transpired with Chris’s godfather, Pearl, who is serving double duty as her pastor. Monique admits she is feeling embarrassed over her actions. She now claims she can’t reach out to Candiace since it has turned into a legal situation. Monique is now sharing attorney-client communications and claiming that Candiace originally wanted a civil suit and when she was rebuffed decided on criminal charges. This whole situation is really out of control and super messy.  SIGH.

Monique starts calling the ladies to invite them to the podcast. Karen says she will come, and Robyn is, of course, indecisive. Wendy, at least, is honest by responding she isn’t cool with Monique’s lack of accountability. She is not believing for one minute that Monique has turned over a new leaf after just two weeks. I do agree with Wendy on that one. Too soon.

Karen and Ray are meeting with their life coach, Avalaura, and are still trying to work through their issues. Ray is anti-therapy, but he is there so that is promising. Karen admits that she has changed and her priorities are different. Ray is on his third retirement? Huh, wow he has had a lot of career changes! Ray obviously wants the old Karen back and doesn’t like the new and improved Grande Dame. Karen wants him to support her like she did when he had his tax issues. Ray does now acknowledge she did stand by him and he is appreciative. I think they both should fight for their marriage since it has lasted 23 years — that has to have some significance. There is love there so keep fighting for it!

Wendy and Eddie are sharing some of her magic breast milk with Karter and Kruz. I am surprised they would try it! I am really liking Eddie so far as he seems to be a really genuine guy. There has been some backstory this week on what really caused the divide between their families. They always say the truth is somewhere in the middle but it is still a very sad situation that has gone on too long…

Wendy has invited the ladies to her event called “Wine with Wendy.” It is an empowerment event that will be focusing on the 2020 election and the impact black women could have on it. Wendy obviously isn’t inviting Monique since she is clearly team Candiace.

In her ITM, Candiace, who is wearing that awful turbie twist headwrap, is still smarting over Karen’s lack of support. She lets Wendy know she plans on discussing this at her event. Wendy maybe should have told her not to do that since this event is about empowerment, not confrontation. Sorry, I digress…

Gizelle picks up Jamal, who is in town? He attended Angel’s school event. Gizelle wants to discuss their long-distance relationship. She is still not feeling the commitment from Jamal since they don’t even live in the same state. Jamal, who is a very smooth operator, explains that he is just giving her the space she requested. He can really talk the talk but can he walk the walk? Not feeling the sincerity from him at all! He comes across as phony and way too produced for his camera time.

Monique is having her event for her podcast. She does look fabulous after having three children. Chris, who looks forlorn, is there to show support for his wife. Ashley also shows up to support her and get paid for her camera time. Monique shares that Karen claimed an illness so she is a no-show.

The other ladies are not buying that Monique has changed over two weeks. She thinks they aren’t giving her a chance to see for themselves. Ashley then throws Karen under the bus and then backs up and runs her over again by telling Monique that Karen would have pressed charges. Very shady, Ashley, I knew you were there for a reason!

Monique and Chris do a Q&A session and the first question is of course about the altercation with Candiace. She clearly doesn’t appreciate that question since that topic was supposed to be off-limits. Monique just wants the audience to pray for them. Good answer for now.

Robyn and Juan are having a family night at the bowling alley. She tells him that she has to talk to her parents about what is going on with her tax issues. Robyn is apprehensive about going down this road with her parents. Why did her mom, Gladys, find out on Instagram?

While Robyn is in the ladies’ room, Juan decides to talk with her parents and the kids. He tells them he is going to propose again. The look on Robyn’s dad Guy’s face is reminiscent of Gizelle’s dad’s look of discomfort. Gladys thinks they just need to get over their differences. These two don’t just have differences. There is a lot more dysfunction going on than just that.

We are now at Wendy’s “Wine with Wendy” event. She is hoping that this event will inspire women to realize they have power and can make a difference in this world. WTF is Candiace wearing on her feet and Robyn on her head? In their ITMs, the other ladies seriously shade Robyn’s bad wig. Wendy does a little roleplay with the audience to discuss how to empower women through the global process. She encourages them to not just focus on the White House but focus on their local elections as well. Good advice, Wendy.

Gizelle discusses Karen and tells Robyn, Ashley, and Wendy that she is struggling. She claims she wants to just befriend her and reach out to her. I don’t believe for a second that she is sincerely concerned for Karen. The green-eyed bandit is just stirring the pot and trying to push the Grande Dame off of her pedestal.

Karen and Candiace get down to business and talk about the incident. She tries to get her to see that she is a brilliant woman but uses her eloquence and her words as a weapon. Karen tells Candiace she was there for her when she was in the hot seat last season. She is doing the same thing for Monique. I do think Karen is really trying to be the voice of reason for both of them. Karen isn’t denying what Monique did wasn’t horrifying, but she won’t let anyone’s opinions sway her on how she should respond.

Ashley is going to continue to soldier for Monique since she stood up for her and Michael last season. She is going to give her another chance. Ashley thinks Monique and Chris could have jumped on the bash Michael bandwagon but they told the truth. Wendy very articulately notes that you are giving them your allegiance because they were honest?

Wendy leaves the table to listen in on the conversation between Karen and Candiace. She isn’t buying Karen’s defense. Karen thinks that there is something medical going on with Monique and she needs some anger management. She is holding her ground and won’t let Wendy tell her who to support. Candiace tries to sway Karen by telling her that Monique is leaking fake stories to the blogs and basically using her. Karen then throws a huge grenade at Wendy by saying for someone as intelligent as she is that she is being ignorant. Wendy is going to be Candiace’s ride or die this season and the conversation ends with her unwavering support. The battle lines have been drawn!

Next week, the ladies are headed to Portugal! Monique is going to fight against Candiace’s allegations. Well, at least we can look forward to Portugal. Have a great week, everyone!