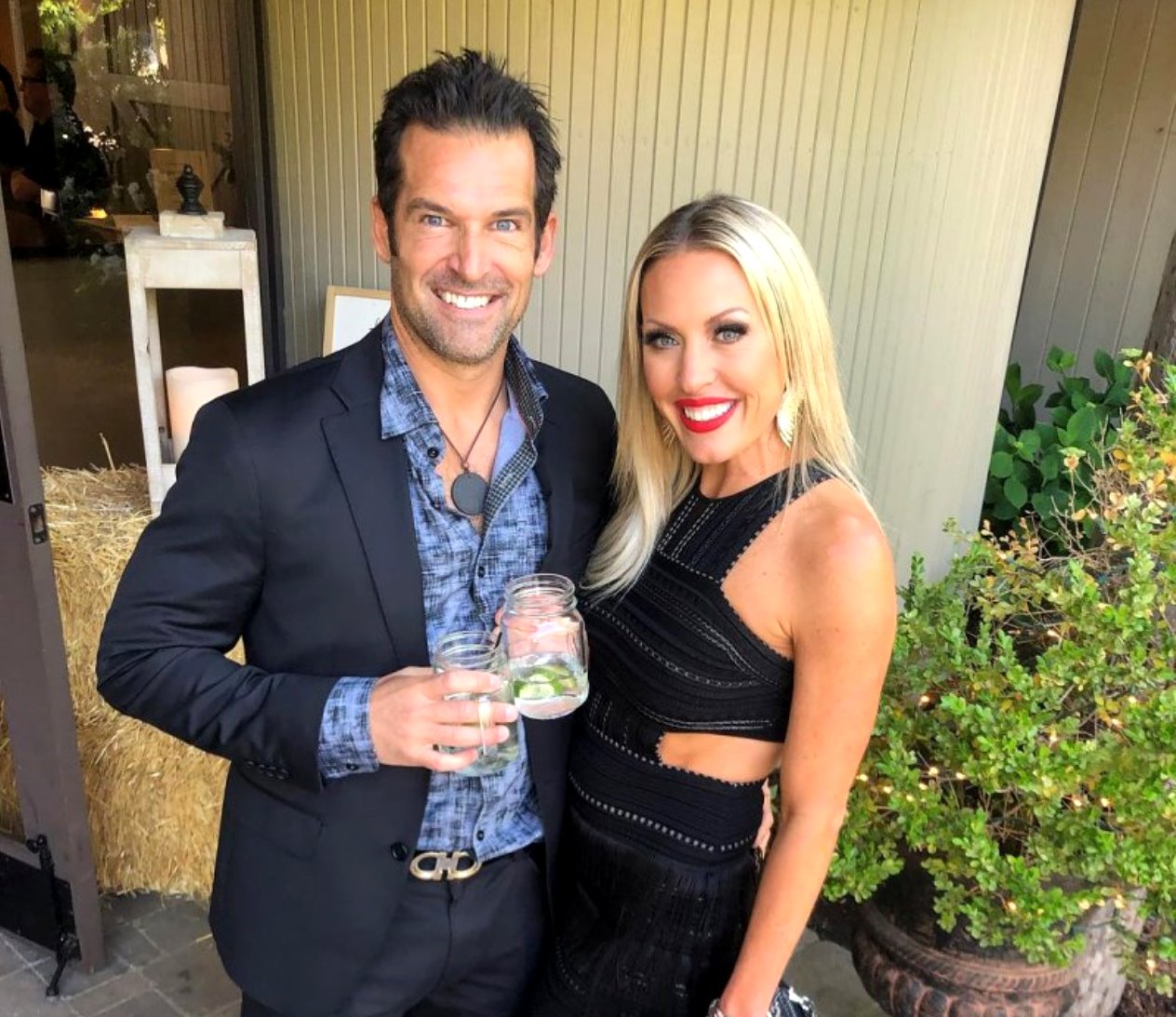 Braunwyn Windham-Burke has been in tears all morning following the latest episode of The Real Housewives of Orange County as she just took to her Instagram Stories moments ago to react to the backlash she is receiving in regard to her admission that she has physically abused her husband Sean Burke on more than one occasion.

Following the December 9 episode, which featured Braunwyn admitting to hitting Sean during their marriage, Braunwyn said the reaction of viewers was “much worse” than she imagined before seemingly confirming how many times she got physical with Sean as he weighed in on Twitter.

“I probably shouldn’t do this but I shouldn’t do a lot that I put out there so I’m going to anyways,” Braunwyn began in a series of videos shared on December 10.

“I’ve been crying all morning because the comments were so much worse than I anticipated,” she explained as she appeared on camera with no makeup and her hair pulled back. 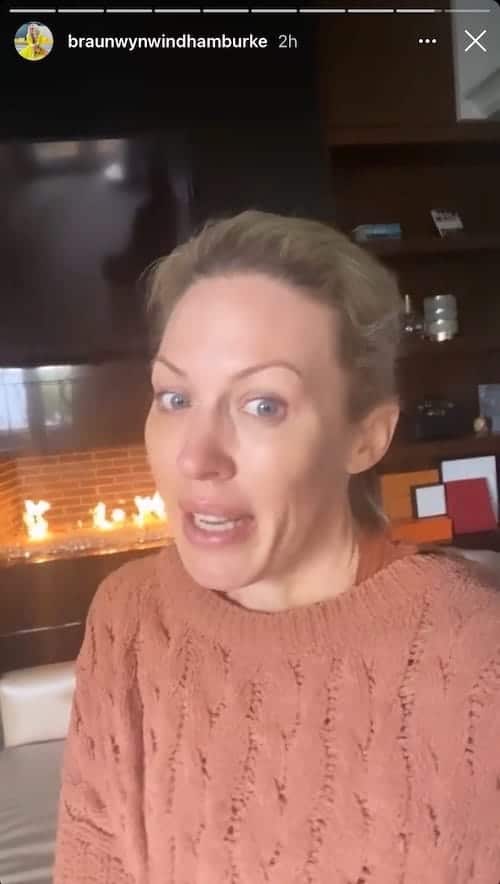 “Getting sober was hard for me,” she continued.

According to Braunwyn, who first confirmed her sobriety during the premiere episode of RHOC season 15, she lashed out at Sean twice after he got in the way of her potential relapse.

“At three days sober in Aspen, I was trying to drink and Sean stopped me and I lashed out and it was ugly. And then another time during quarantine, I was sitting there with a bottle of wine and Sean was trying to stop me and once again, I lashed out,” Braunwyn recalled.

While Braunwyn and Sean’s marriage endured some major challenges throughout filming, Braunwyn felt she was doing the right thing by filming their ups and downs and being honest on camera.

“I’m trying to tell the sobriety story as honestly as I can, that it’s not been easy, that I have had moments where I was very close to relapsing and to see how hard you guys…Keep in mind I’m still only 60 days sober when we’re watching the show,” she explained. 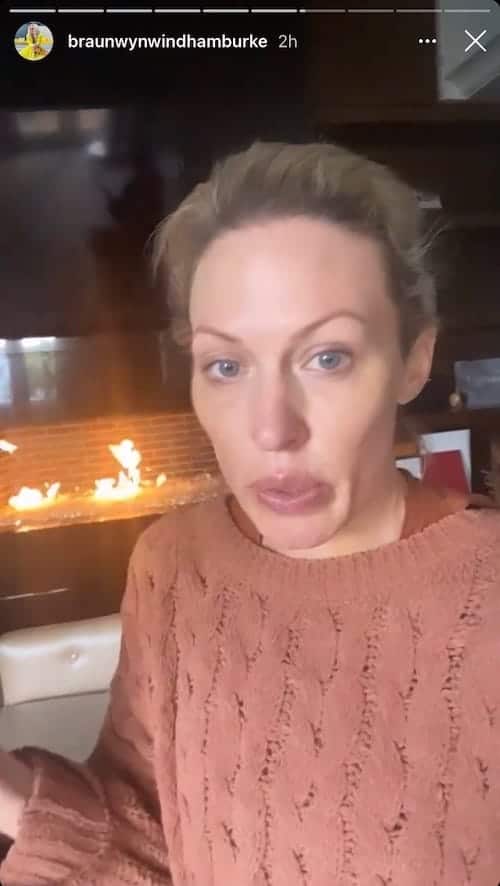 Although Braunwyn would like to see more compassion from RHOC viewers, she did admit in her final Instagram Story that her behavior was awful regardless of what she was going through at the time.

“It was hard for me and I’m sorry if you guys don’t like that it’s hard for me but it was and my behavior was atrocious,” she confessed.

Shortly after Braunwyn’s Instagram statement was shared, her husband spoke out on his Twitter page about the shocking reveal of the December 9 episode of the show.

“I love my wife. On two occasions I was the last defense between her and a bottle,” he confirmed.

Sean then slammed those around Braunwyn who have publicly spoken out about the ugly side of their relationship.

“It’s disgusting to see some comments from her so called ‘friends’ that pretend to know anything about our relationship, attacking her, rather than showing an ounce of support,” he wrote. 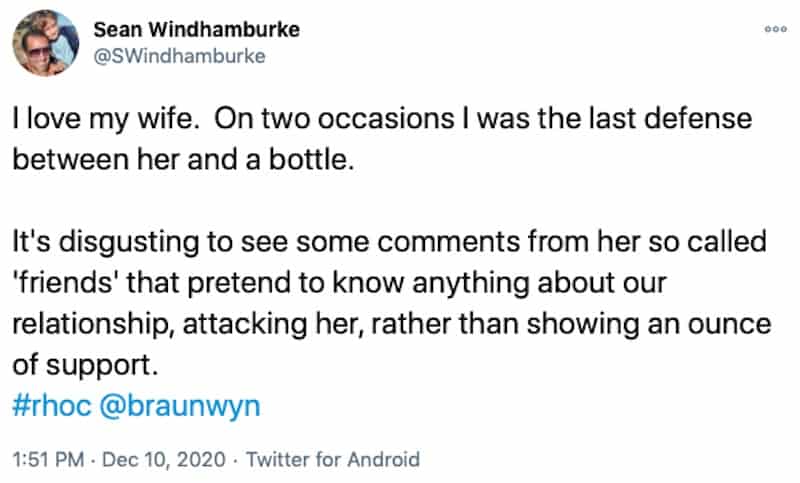 Meanwhile, the backlash against Braunwyn continues on as some RHOC fans are now calling on her to be fired following her admission.