RHONJ’s Jennifer Aydin Throws “Low Blow” at Melissa Gorga’s Business and Calls Her Family “Crooked,” Plus Melissa Claps Back as Their Social Media Feud Gets Uglier

by Emily Campbell May 20, 2021 175 comments
ShareTweetWhatsappPinterestRedditTumblrMailFlipboard 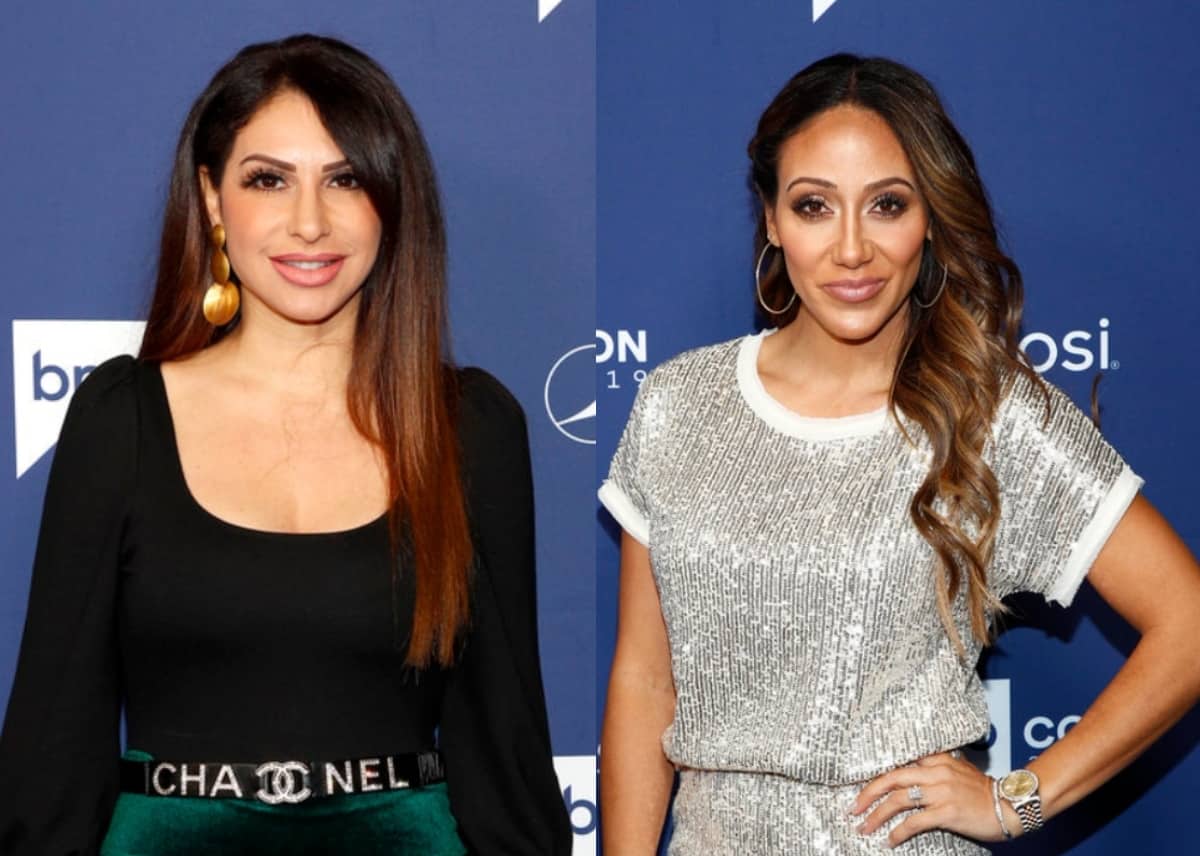 It seems Melissa Gorga and Jennifer Aydin will not be reconciling anytime soon as they continue to publicly slam each other on social media.

Ahead of part one of the season 11 Real Housewives of New Jersey reunion, Melissa and Jennifer took to Instagram to blast one another. Melissa fired the first shot in a long rant about Jennifer. She called her co-star “sloppy” and “fake and conniving,” and she accused Jennifer of throwing “her own mother under the bus” for a storyline.

However, an “unbothered” Jennifer quickly clapped back by claiming Melissa is only on the show because of her OG sister-in-law, Teresa Giudice. She then went on to accuse the Envy Boutique owner of faking her storylines. Once Melissa saw the post, she felt the need to leave a comment, which has since been deleted.

“[Yeah] – this is getting old – was expecting this. You’ve been saying the same sh*t since you got on [the show],” she wrote. “Got anything new?! I think [you’re] the one [that] uses everyone around for [a] storyline let’s be real. YOUR WHOLE FAMILY. Nothing ever about you. Got anything new?! Not trashy CLASSY [and] still going strong. A lot harder in the [Housewives‘] world [than] being the Hot Mess!! Get It?!! It’s been 11 years for me. Kiss my a**!” 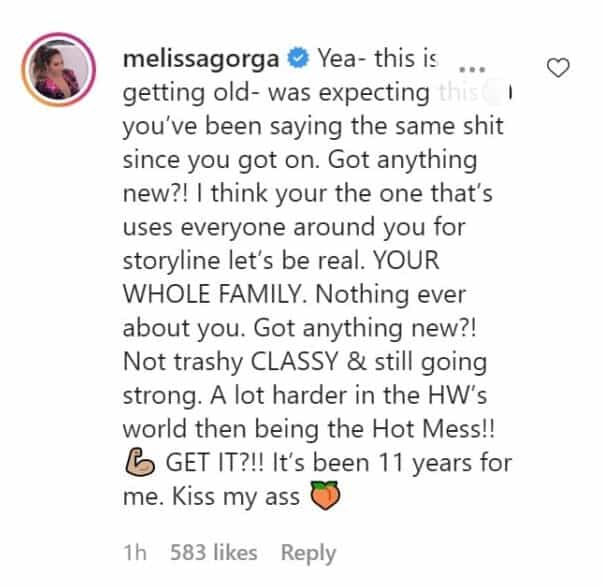 Of course, Jennifer responded almost immediately to reiterate what she claimed in her first clap back. However, she also added a few more points and alluded to a rumor that Melissa and her husband Joe Gorga are shady in their business dealings.

“Wow – you really are stupid – You only got on because of Teresa and that kills you,” the mother-of-five fired back. “The audience has learned more about me in three years than they have of your measly 11. Your fake baby and sister that never was – and oh wait – Divorce divorce! Yeah right! All they see is your self-absorbed, obsessed, envious behavior. I am my family and I share it – more than you ever had the guts to do. Go embarrass your daughter some more, [because] you and your crooked family got nothing else. Girl bye!” 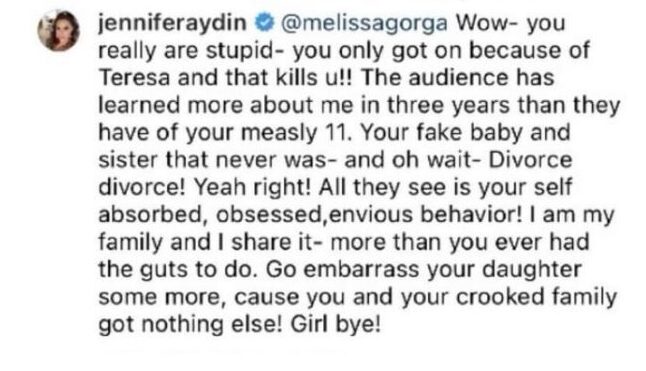 After a few minutes passed, Jennifer decided she had gone too far by posting the article and subsequently deleted the post, but she added another to explain her decision with the caption, “In case you saw it.”

“OK – That was a low blow. I’m done now and I want to enjoy watching the reunion with everyone else,” the post read, which she later commented on.

“I really don’t know why she started with me today and you all know me by now that my words are sharp and cut throat. But I’m over it now,” she declared. “Next!”

Real Housewives of New Jersey season 11 will conclude with part two of the reunion, which airs Wednesday night on Bravo at 9/8c.