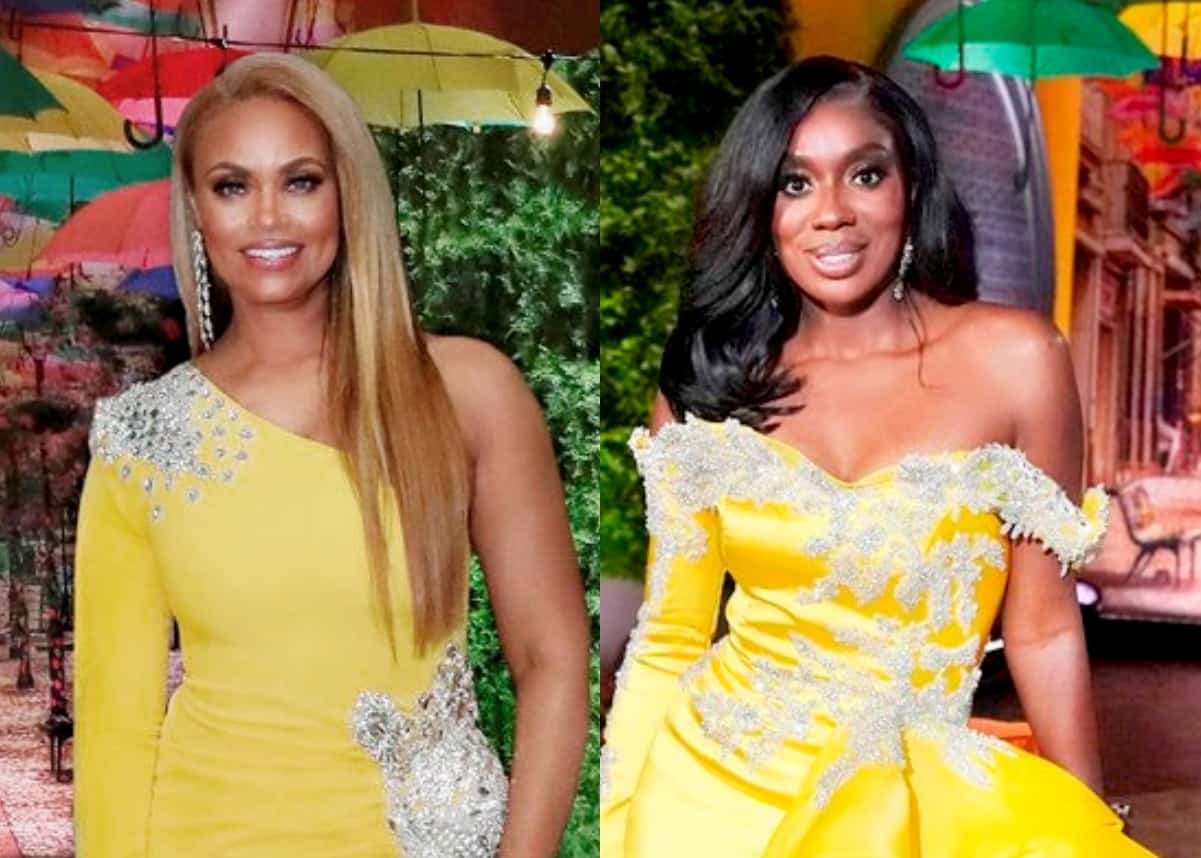 Gizelle Bryant is spilling some tea about the saga surrounding the “Eddie Rumors” and sharing what fans can expect of her relationship with Karen Huger before reacting to the shade thrown her way regarding ex-husband Jamal Bryant.

Gizelle recently received a scolding from Wendy Osefo on the Real Housewives of Potomac after the My Word author brought up online cheating rumors surrounding Wendy’s husband, Eddie Osefo. The women were taken aback by Wendy’s reaction, but nobody was more surprised than Gizelle, who claims she had previously discussed the rumors with Wendy off-camera.

“I’m gonna give you a little tea, before the season even started, she and I talked about it on the phone,” she said on a recent episode of We Should Talk with Gibson Johns. “We talked about all the social media stuff. It was a very rushed conversation, and we had to get off the phone, and in my mind I was like, ‘I’m gonna readdress this with her.’ But, like, not the reaction she had in Williamsburg — at all! Very, very, very strange and different.”

She added, “Because I had talked to her about these things before, and she wasn’t upset about any of it! Right? So to talk about it on camera, clearly, is not gonna upset you. Her reaction, for me, was bonkers. Why would [your reaction] be the difference if you weren’t upset about it off-camera?”

As for her friendship with Karen, which has been nonexistent so far this season,  Gizelle teased that fans can expect to see them make some progress later in the season.

“As the season progresses, you’ll see us get to a better place, for sure. Nobody wants to fight all the time,” she insisted. ” For instance, on Bravo’s Chat Room — she was on Chat Room last week — it was similar to what we used to be. Fun shade, slight digs, but we do know how to laugh together. We’re there.”

Nevertheless, the mother-of-three went on to call Karen out for continuing to talk negatively about her with fans, but she’s hoping Karen will eventually come around and settle their beef once and for all, stating, “We do better when we’re kinda okay.”

Over the years, Gizelle has also dealt with a plethora of snarky comments about her ex Jamal and his alleged cheating habits. In fact, many now refer to him as “Pastor Holy Whore,” after former RHOP star Monique Samuels dubbed him as such during the season five reunion. However, Gizelle is seemingly unfazed by the never-ending remarks at this point as she thinks her co-stars only bring up Jamal to deflect from their own issues.

“Most of the time when people are angry and they’re screaming and they’re yelling and they’re going crazy on me, it’s typically they’re mad because of their issues.” she claimed. “They’re taking it out on me and I know that.”

“Jamal is an easy target,” she continued. “People can say whatever they want about Jamal. I don’t care at all. It won’t even faze me in any way, because I know my relationship with this guy. He’s been in my life way before I met any of these people and he will always be in my life. That doesn’t even bother me! It’s kinda like, ‘Guys, come up with something else, because that’s too easy of a target.’”