Home Real Housewives of Potomac News Candiace Dillard Blames Being “Drunk” For Fights With Mia and Ashley, Seemingly Agrees She Has “No Real Friends” on RHOP Cast, and Applauds Husband

Candiace Dillard Blames Being “Drunk” For Fights With Mia and Ashley, Seemingly Agrees She Has “No Real Friends” on RHOP Cast, and Applauds Husband 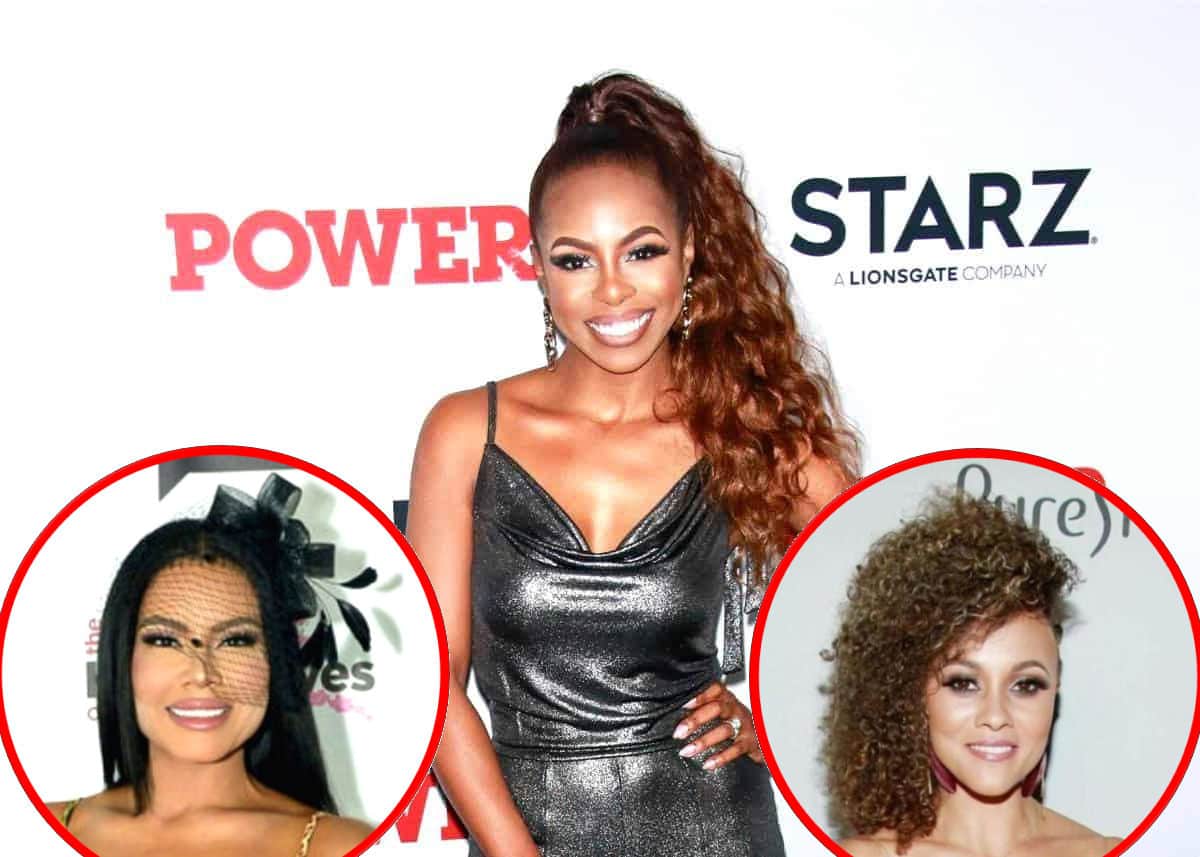 Candiace Dillard-Bassett believes her heated moments on The Real Housewives of Potomac erupted in response to the behavior of her castmates.

As she feuded with both Mia Thornton and Ashley Darby on Sunday’s episode of the show, Candiace took to her Twitter page, where she admitted to being “drunk,” suspected she had “no real friends” on the cast, and applauded her husband, Chris Bassett, with a couple of tweets.

“I think you’re like every single person in the world who feels attacked – [your] adrenaline takes over the ability to understand why people act like they do. How could you know the old saying your momma would set her off [because] nobody told you behind the scenes,” a fan wrote to Candiace on October 10. 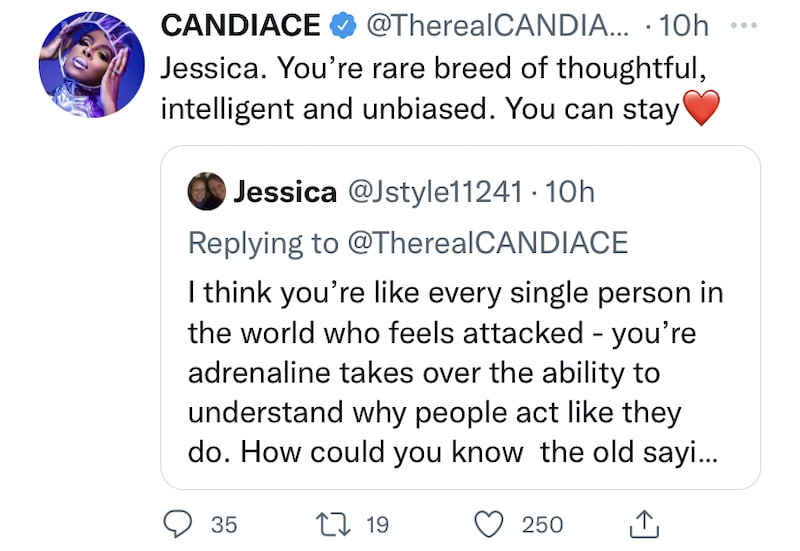 At the beginning of the RHOP episode, fans saw a continuation of Candiace’s feud with Mia, whose mom continues to be a hot topic for Candiace, who called the woman “low budget” amid her addiction struggles. Then, as the show continued, fans watched as Candiace butted heads with Ashley, whose husband, Michael Darby, Candiace deemed as an “overseer.”

Speaking of the drama, another fan asked, “Do you think you would have kept your cool more if you weren’t under the influence?”

“For sure,” Candiace confirmed. 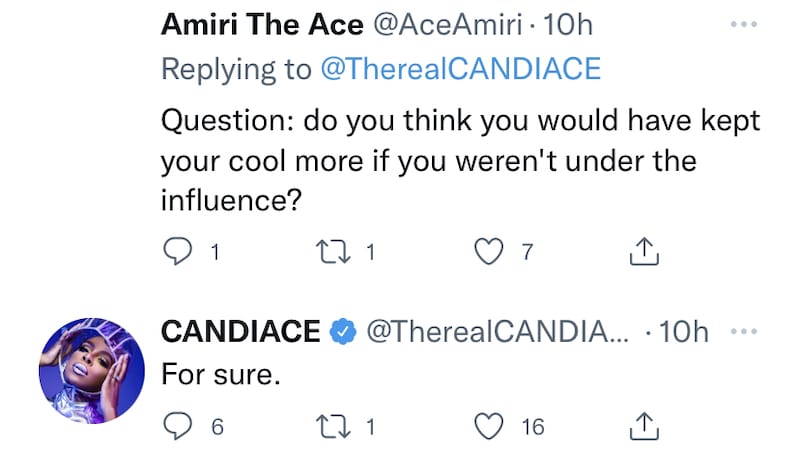 Candiace also spoke of being intoxicated after another person told her she “overreacted.”

After shading her castmates after last week’s RHOP episode for failing to support her amid her ongoing feud with Mia, Candiace further confirmed that she and her co-stars aren’t close by responding to a fan who told her, “You have no real friends on this show.”

In response to the post, Candiace seemingly agreed with the Twitter user’s sentiments by sharing an eyes emoji.

Also on Twitter, Candiace retweeted a couple of messages from RHOP viewers that mentioned her husband and appeared to applaud him for the efforts he made to mend relationships between Candiace and her castmates on the show.

“Chris Bassett is one of the best househusbands on Bravo!” her first retweet stated.

“This man is working harder than any husband on Real Housewives,” read the second. 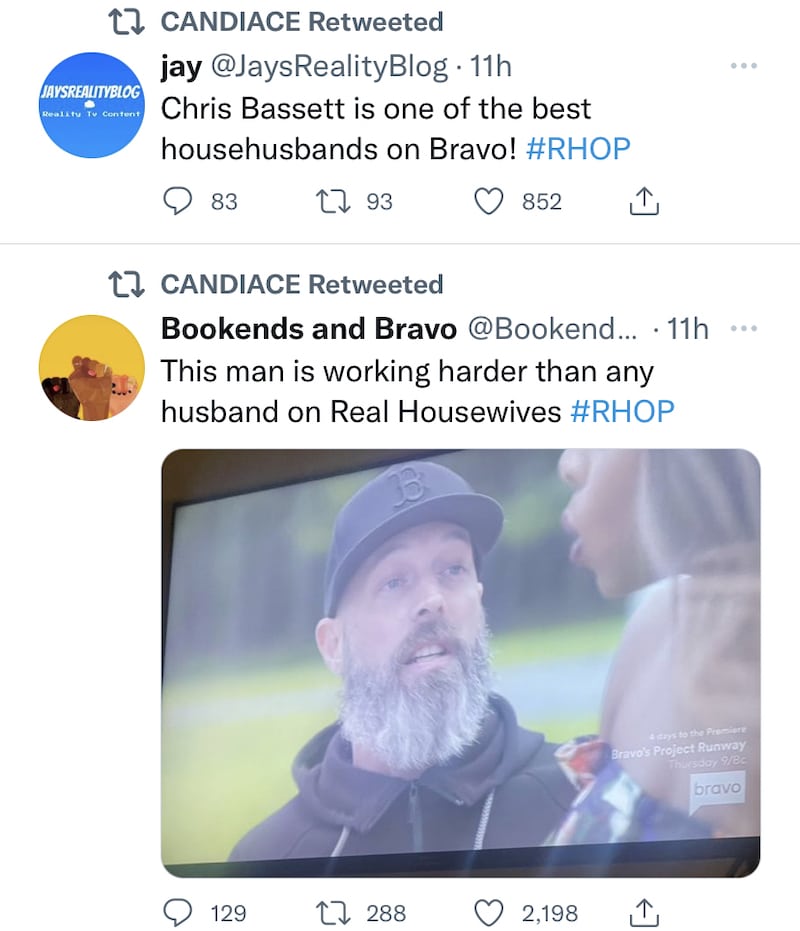