Home Real Housewives of Beverly Hills News Camille Grammer Wonders Why RHOBH Cast Came for Garcelle at Reunion, Reacts to Being Told to Back Off by Garcelle, and Claims Ladies “Seem Fearful” of Erika

Camille Grammer Wonders Why RHOBH Cast Came for Garcelle at Reunion, Reacts to Being Told to Back Off by Garcelle, and Claims Ladies “Seem Fearful” of Erika 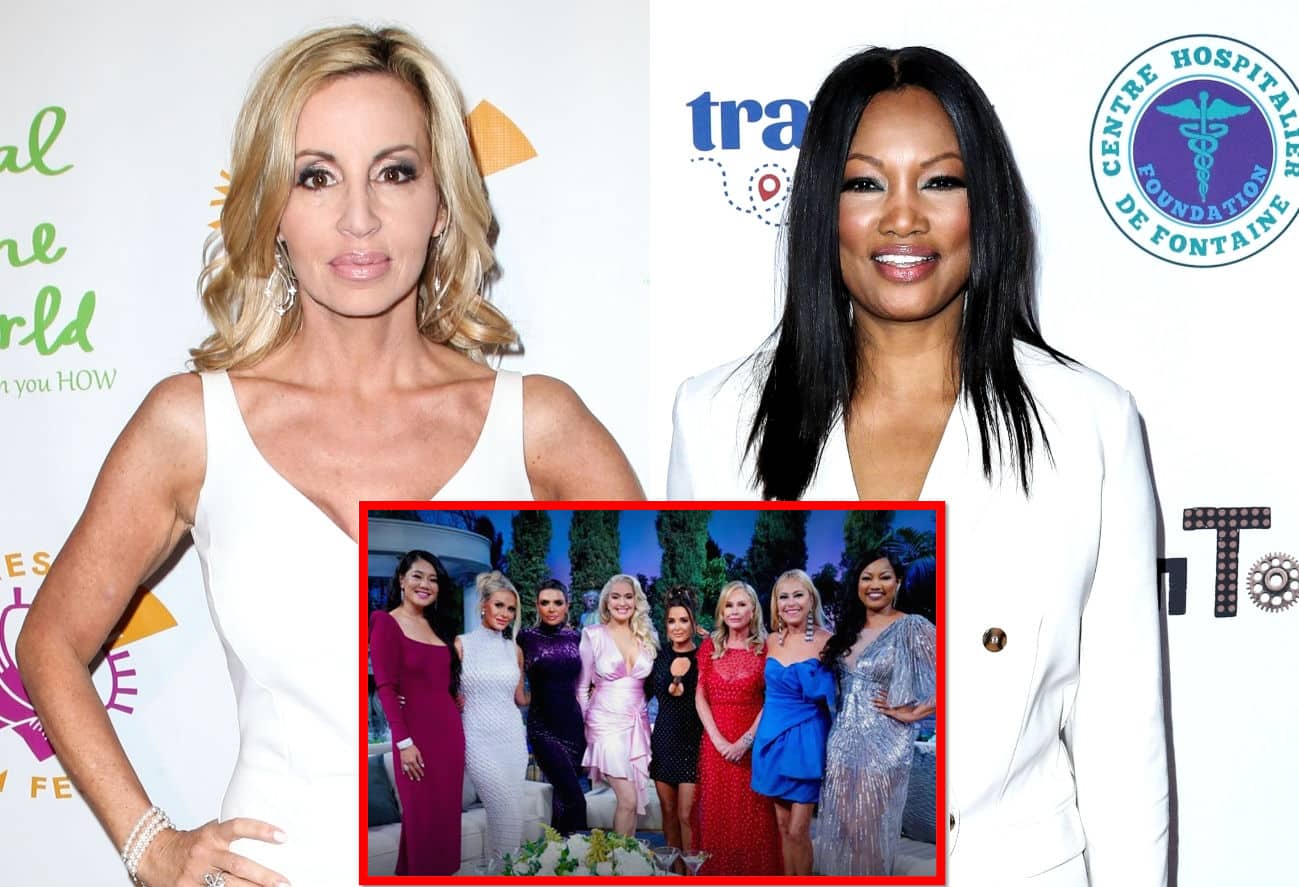 Camille Grammer didn’t like what she saw on Wednesday night’s episode of The Real Housewives of Beverly Hills season 11 reunion.

After watching as Dorit Kemsley and Lisa Rinna went to war with Garcelle Beauvais, even battling it out over Lisa’s season 10 feud with Denise Richards, Camille took to her Twitter page to share her thoughts on their drama and comment on the cast’s behavior toward Erika Jayne.

“Why are the ladies coming for Garcelle?” Camille asked on October 13.

“Fox Force Five sticking together, like they did when they came after you,” a fan replied, giving a nod to the friend group established by Kyle Richards, Lisa, Dorit, Erika, and Teddi Mellencamp. 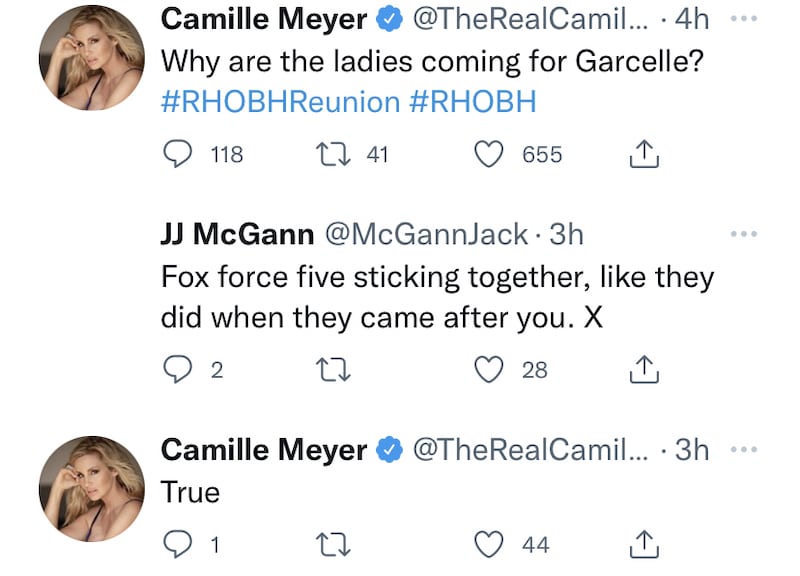 After Camille proclaimed her support of Garcelle amid her drama with her castmates, a fan page wondered how she felt about Garcelle saying she should “back off” rather than return to RHOBH on Watch What Happens Live. Andy had asked Garcelle if in light of Camille’s tweeting this season, should Camille “come back or back off?”

“How do you feel about her saying we (Camille) should back off on WWHL????” the page asked.

“I’m fine with it. It’s her opinion. I don’t agree with it,” Camille replied. 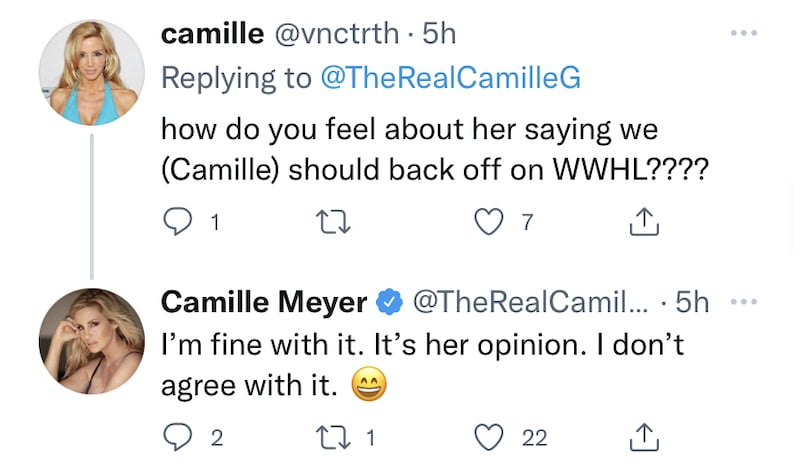 In response to Camille’s tweet regarding the RHOBH cast targeting Garcelle on part one of the reunion, one person suspected the ladies had chosen to spotlight Garcelle because they were “too afraid” to go after Erika.

“Because they are too afraid to go after Erika. She must have dirt on them or something,” the person wrote.

“They do seem fearful of Erika,” Camille stated. 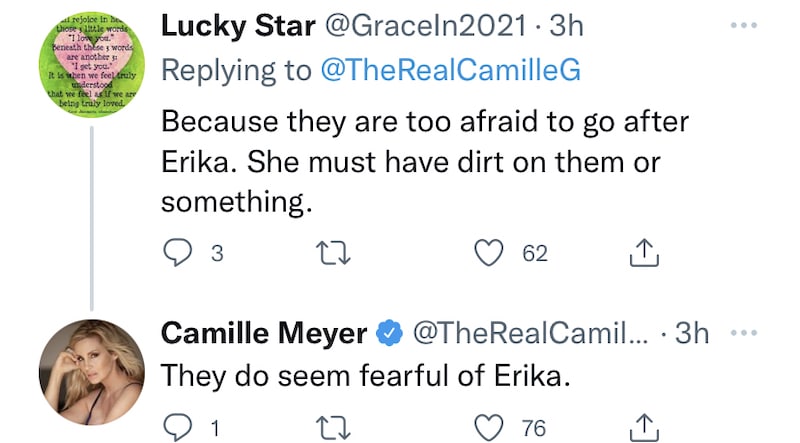 Erika and her now-estranged husband, Thomas Girardi, faced claims of embezzling millions from his former clients at the end of last year as filming on season 11 began. And in the months since, she’s been hit with numerous lawsuits, including a $25 million case claiming she fraudulently received money from Thomas’ law firm.

Also on Twitter, Camille responded to a comment Garcelle made amid her feud with Dorit, who accused her of acting out for attention, which said, “I don’t need anything to stay relevant, let me just say that!” 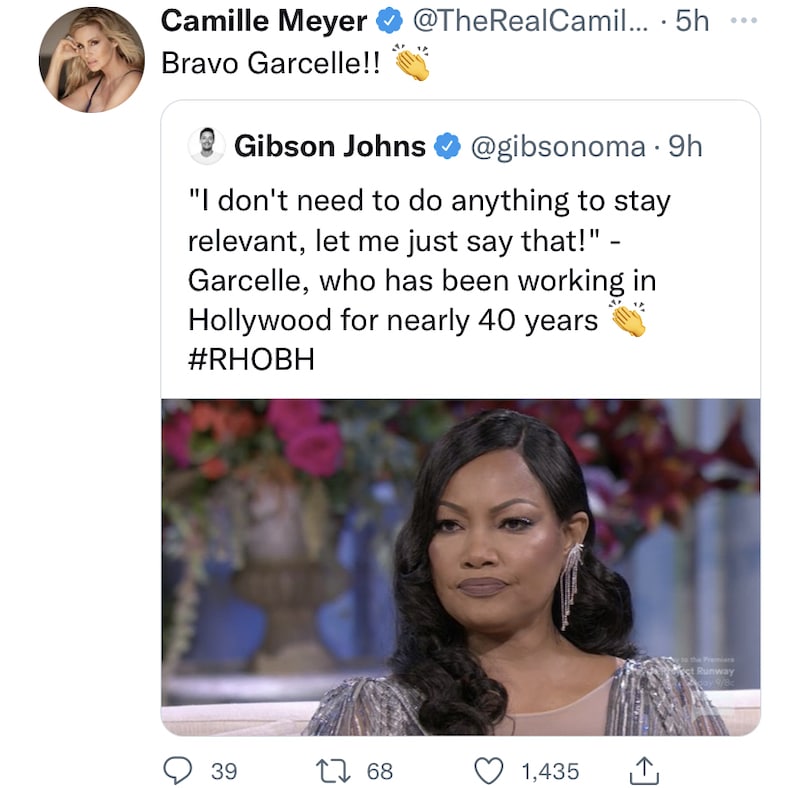 The Real Housewives of Beverly Hills season 11 reunion continues next Wednesday with part two at 8/7c on Bravo.