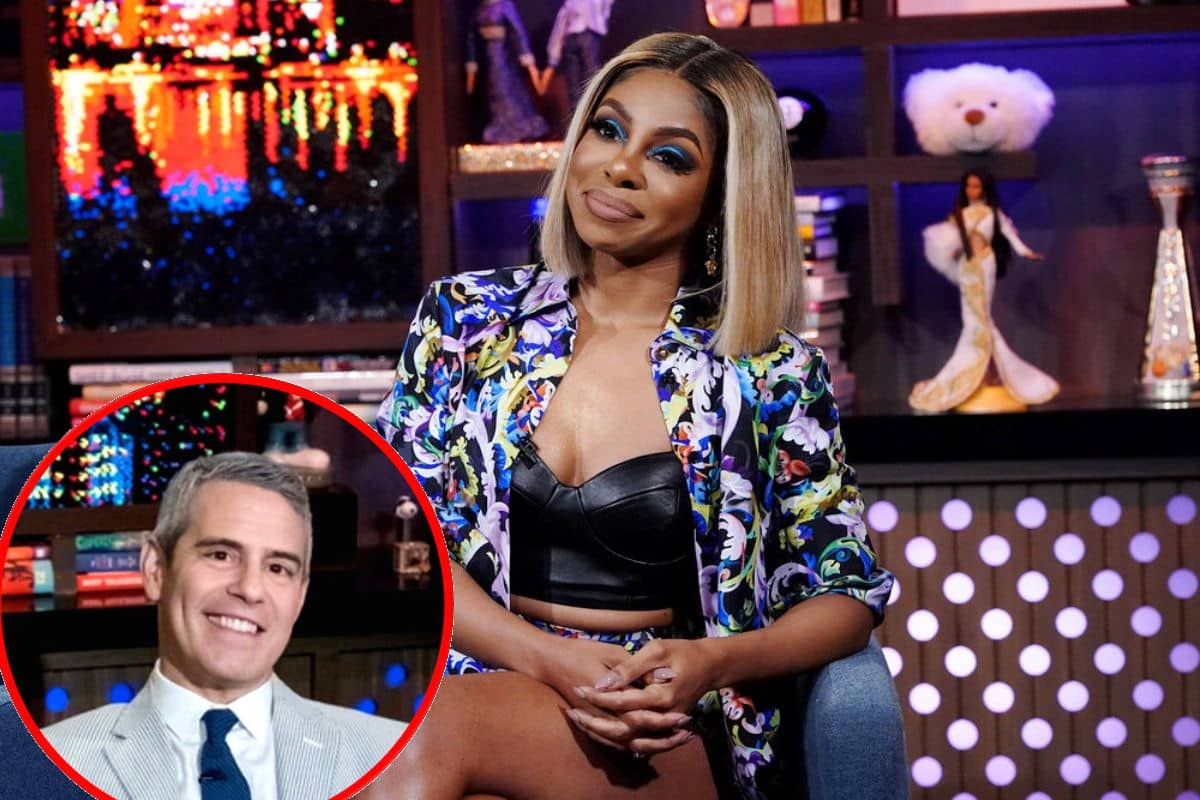 Candiace Dillard-Bassett claims she became suicidal after being targeted with lies from people online.

In a series of new tweets, The Real Housewives of Potomac cast member fought back against a woman who accused her of hurting and making fun of people before seemingly taking aim at Andy Cohen‘s hypocrisy and accusing him of spewing propaganda at the season six reunion.

After tweeting a message that said she was going to “cause a scene,” Candiace was met with a woman who begged her to stop causing anguish to others.

“You hurt people. You have no idea the hurt and anguish you cause. Please stop making fun of people’s flaws. Please,” the person said.

“Girl shut up,” Candiace clapped back.

Candiace then revealed shocking details about her own mental health struggles.

“When you’re on anxiety meds and praying to God you don’t take your own life because of the hurt and lies that people like YOU perpetuate because you don’t like me on a TV show, come talk to me. Until then, actually shut the f-ck up,” she continued. 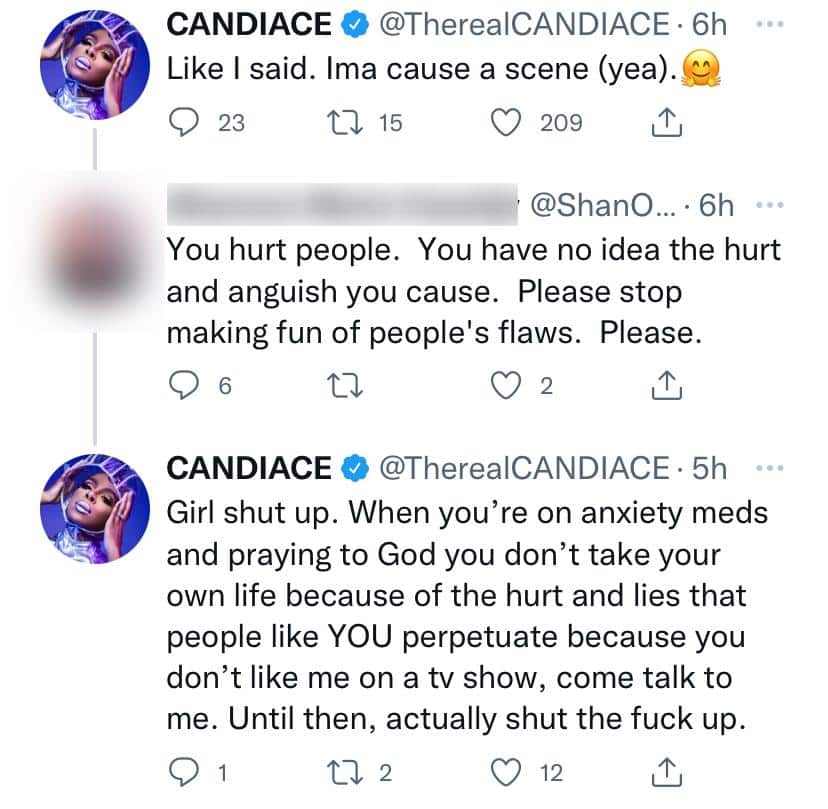 Another person pointed out that when it comes to RHOP, it seems as if Candiace isn’t allowed to react.

“Do they want Candiace to just sit there when people come for her?” the fan asked.

“I would also like to know the answer to this,” Candiace noted.

Someone else suspected it wasn’t what comes out of Candiace’s mouth, but rather how it comes out, that triggers her co-stars.

“I think it’s the ‘tone’ of your voice that is triggering, tbh, not WHAT you say. Your delivery is so fiery, spirited and pointed…where others deliver their ‘shade’ more casually dismissive and subtle. I enjoy you!” the fan wrote. 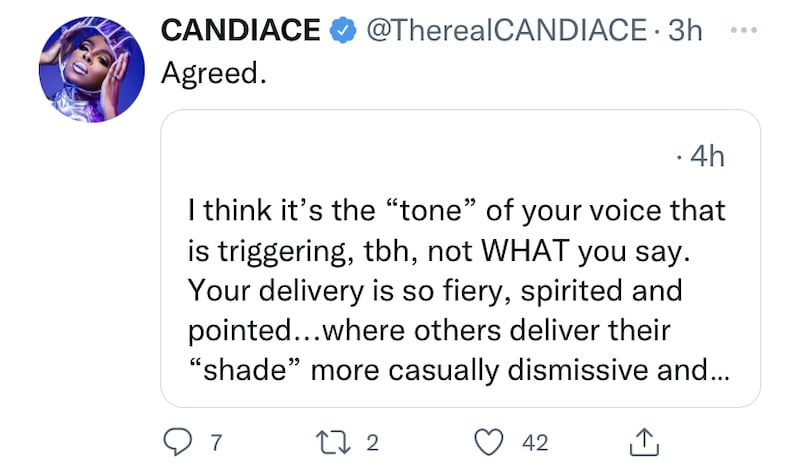 In a fourth message, Candiace seemingly shaded Andy Cohen by reacting to a fan who mentioned his apparent hypocrisy in choosing to ignore certain behavior from Lisa Rinna and failing to hold the legally-troubled Erika Jayne accountable while spotlighting Candiace’s comments to her co-stars.

“Y’all..I can’t. [Andy Cohen] we’ve been screaming from every part of the world to fire Rinna! Freaking hold EJ accountable!.. but [Candiace Dillard]‘s mouth is where you bring the heat?! What in all the effs..(and then the heffa [Gizelle Bryant] coming in condoning physical violence),” the fan said. 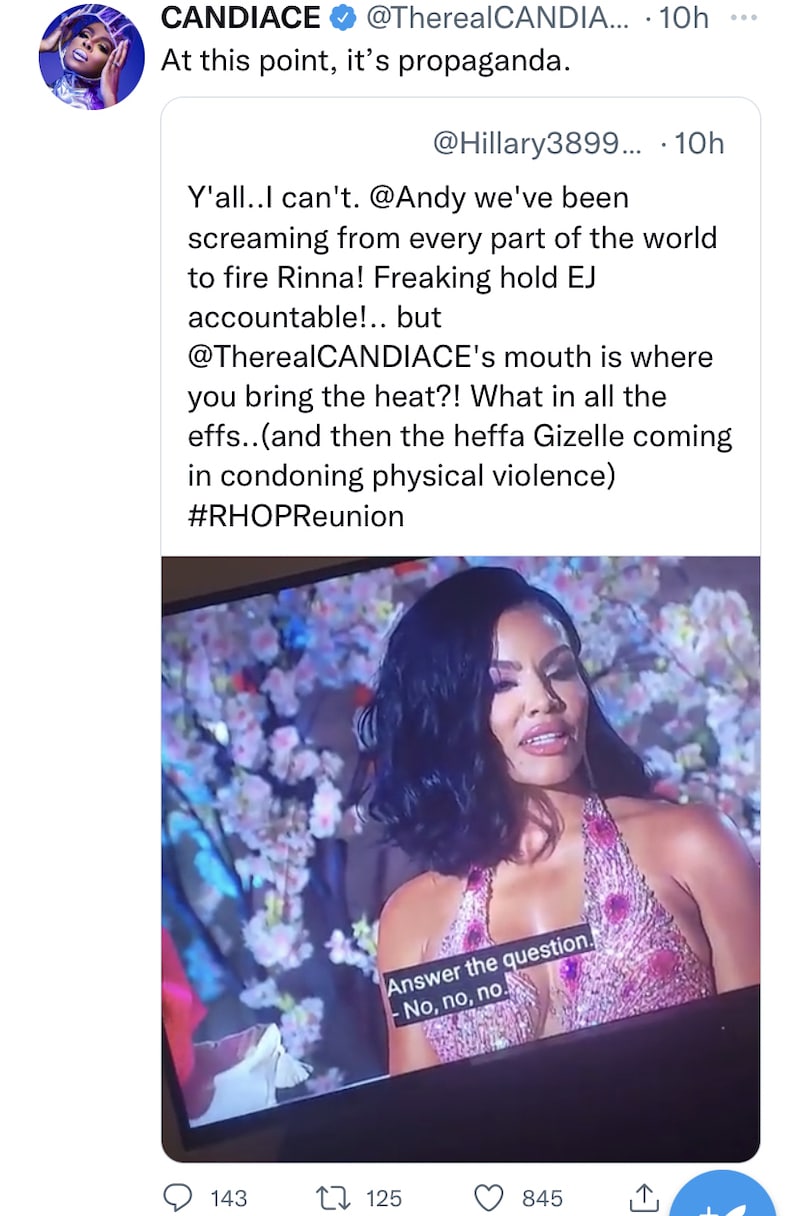