Home Real Housewives of Atlanta News RHOA: Falynn Guobadia Leaks Text Messages From Simon Guobadia After He Shades Her for Cheating “With the Help,” Plus Porsha’s Cousin Accuses Porsha of “Messing Around” During His Marriage

RHOA: Falynn Guobadia Leaks Text Messages From Simon Guobadia After He Shades Her for Cheating “With the Help,” Plus Porsha’s Cousin Accuses Porsha of “Messing Around” During His Marriage 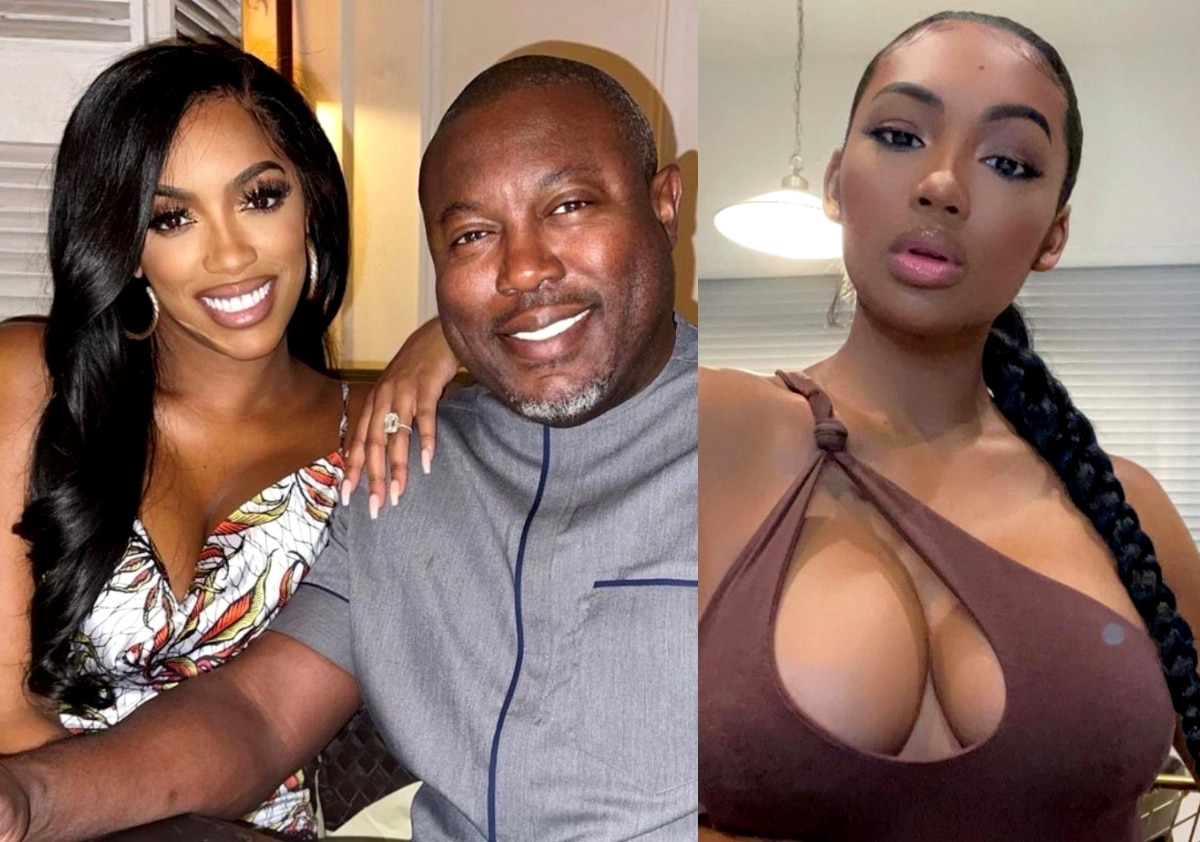 Porsha Williams‘ fiancé, Simon Guobadia, took to his Instagram Story on Monday, where he shared a couple of poignant messages with his fans and followers.

Amid Porsha’s drama with ex-fiancé Dennis McKinley and his mom, Gina, on Porsha’s Family Matters, Simon seemingly slammed Dennis’ treatment of his daughter’s mother before accusing his ex-wife, Falynn Guobadia, of cheating on him “with the help” and raising their child on his dime.

“Black me, respect is earned… not given. We earn that respect by the way we treat our children’s mothers, but NOT disrespecting them privately or publicly; otherwise we perpetuate the cycle of abuse,” Simon wrote in his first message, in which Dennis was not mentioned by name.

Then, in a second, Simon lashed out at Falynn and her now-fiancé, Jaylan Duckworth.

“The disrespect continues after cheating with the help for a whole year before filing for divorce, having a baby by the jobless help, and living off and having a child whose very welfare today depends on my money. The disrespect and ingratitude never ends. Both of you have learned absolutely nothing,” he stated. 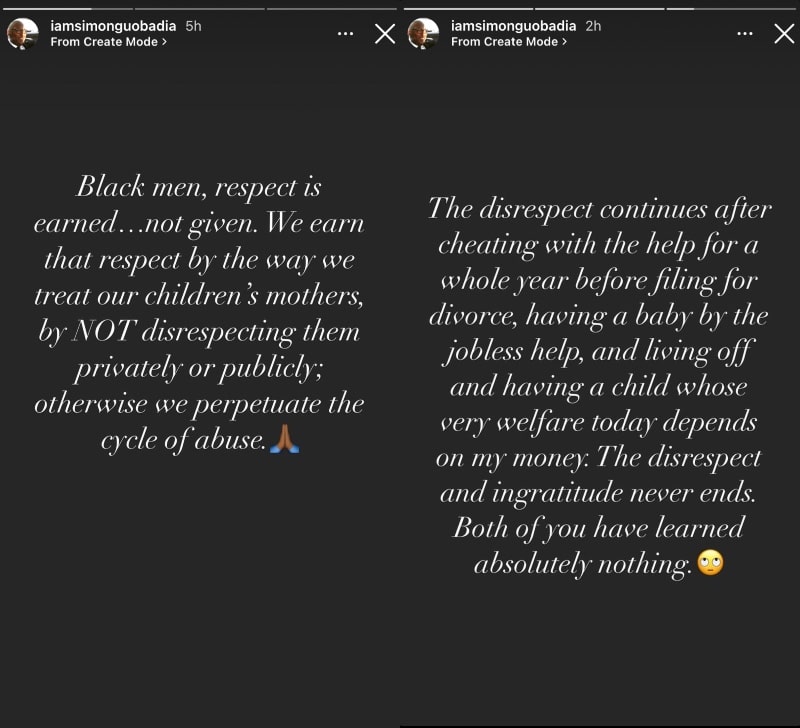 About an hour after Simon’s post against Falynn was shared, Falynn took to her own Instagram Story to fight back with a series of text messages, one of which featured Simon discussing their split at the end of 2020, months before it was confirmed publicly in April 2021.

“I will be moving out today to give our attorneys time to figure out what is best for us,” Simon wrote to Falynn on December 19, 2020. “I know we tried and gave it our best. I am proud of how far we have come individually but I understand that does not always mean we are good for each other.”

She then posted a message from April 14, 2021, just weeks before Simon and Porsha announced their engagement.

“Falynn, there is a good chance I will not be here tomorrow for the rest of the week. I cannot watch while the love of my life moves out of a home we had hoped to live in for the rest of my life. That would be too hard to bare,” Simon had said before accusing her family of bringing “bad spirits and energy” into her life.

“Does this sound like it’s coming from a husband who has been cheated on for a year?!?! Gtfoh!” Falynn wrote in a caption. 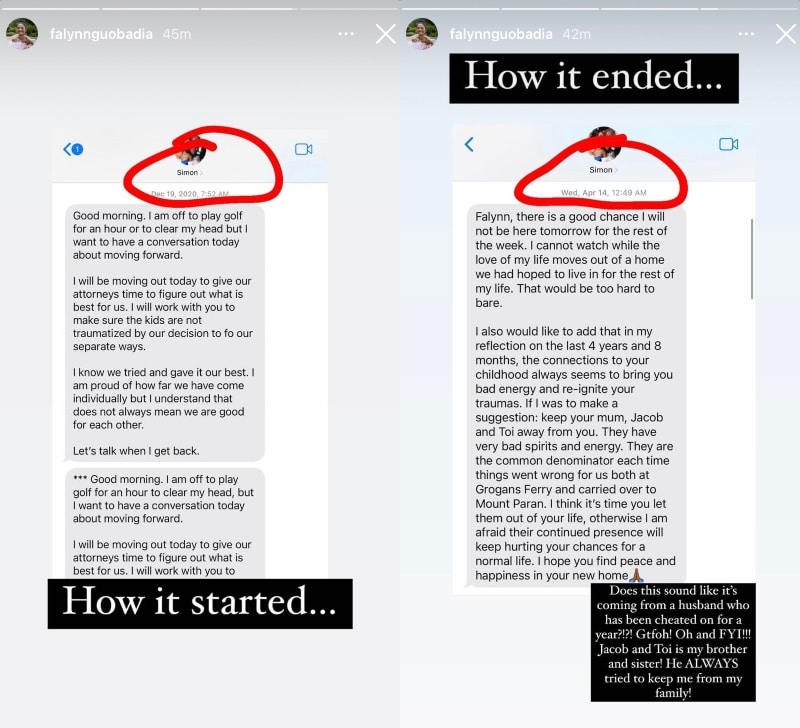 In other news, Porsha’s cousin recently came forward to accuse the Real Housewives of Atlanta alum and her future husband of “messing around” before his divorce from Falynn.

While answering a slew of questions about her family member, the cousin, who goes by “Lady T Ford” on Instagram, confirmed she does not approve of Porsha and Simon’s relationship.

“Do I agree with Porsha [and] Simon’s relationship: I don’t agree with messing around better yet being engaged to a married man,” she said, according to a screenshot shared by The Neighborhood Talk on Instagram. “I told her my thoughts, and her response (amongst a few other words) ‘be blessed’ and oh have the Lord been blessing me.”

Also on Instagram, the cousin confirmed she declined a role on Porsha’s Family Matters because she didn’t want to take part in the creation of “a fake ‘narrative’ that Porsha has a ‘village’ that agree to all her bs” and revealed they are no longer speaking.

“Do you still talk to Porsha: Nope! After not hearing from her or Diane since my mom passed [and] then months later asked to do a show. Absolutely not! I’m not a seat-filler,” she explained. 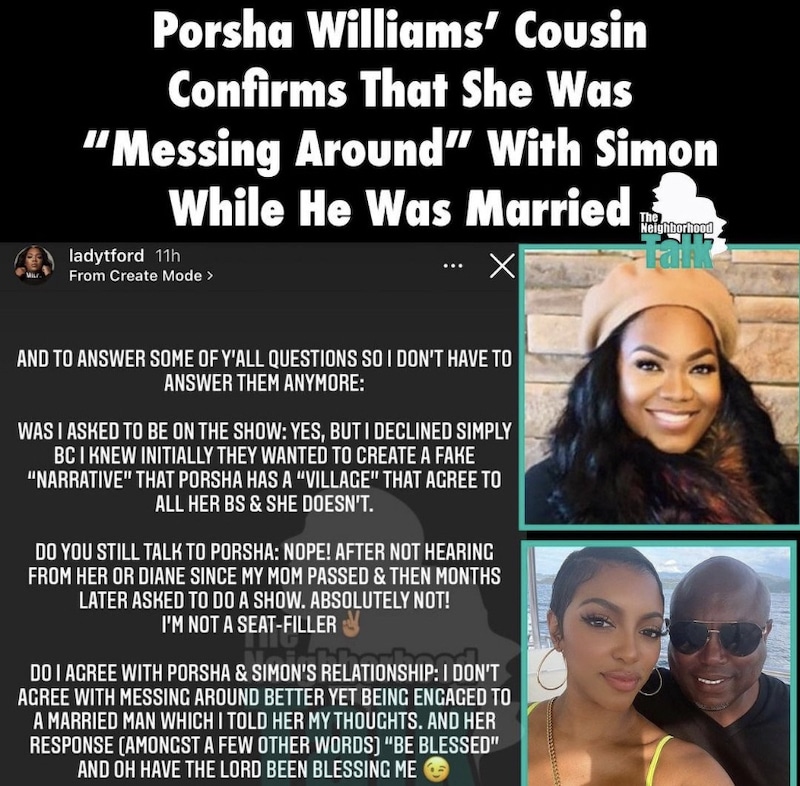