Home Real Housewives of Orange County News Tamra Judge Talks Run-In With Teresa Giudice After Luis Diss, Explains Why Vicki’s “Not Happy” With Her, Plus Reacts to Being “Worst Dressed” at MTV Awards

Tamra Judge Talks Run-In With Teresa Giudice After Luis Diss, Explains Why Vicki’s “Not Happy” With Her, Plus Reacts to Being “Worst Dressed” at MTV Awards 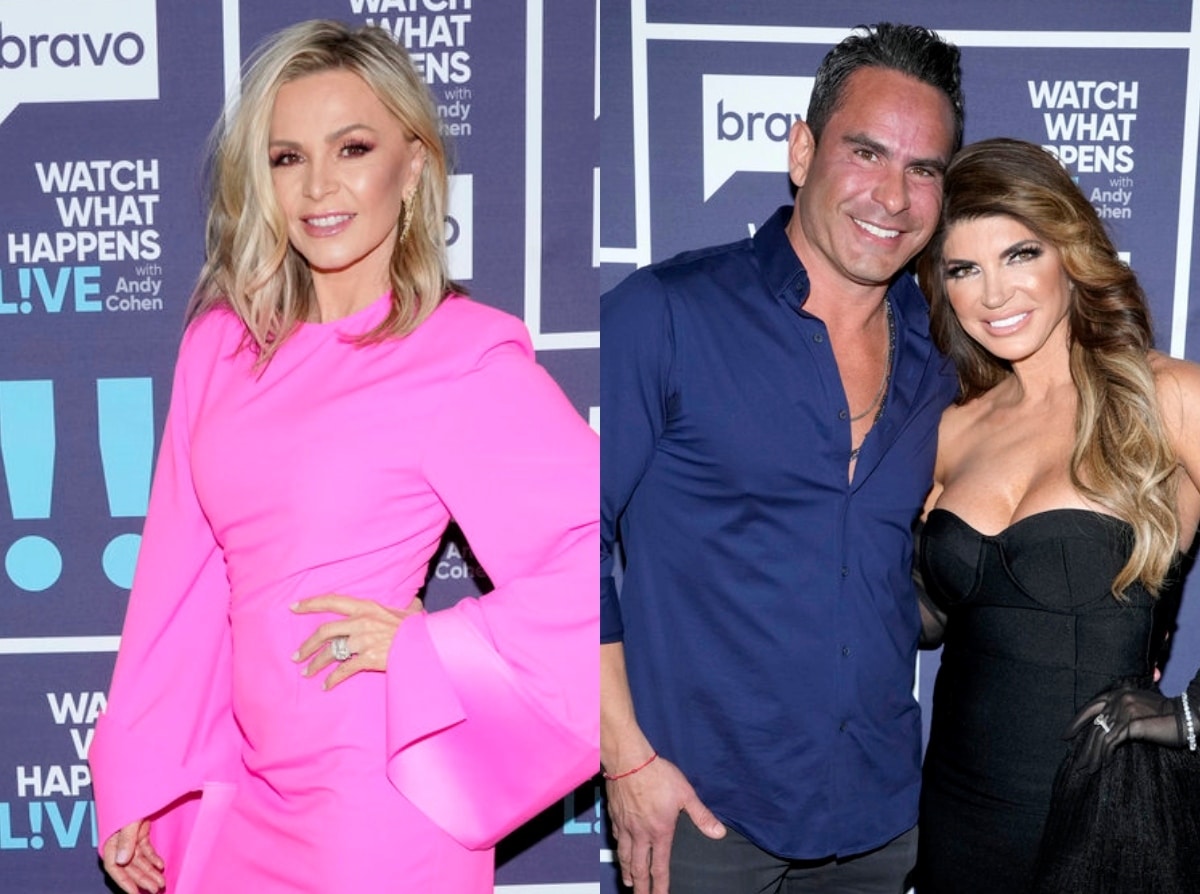 Tamra Judge ran into Teresa Giudice and her fiancé, Luis Ruelas, after sparking a feud with the Real Housewives of New Jersey couple by seemingly shading him for being similar to Vicki Gunvalson‘s ex-boyfriend, Brooks Ayers, who infamously lied about his cancer diagnosis amid The Real Housewives of Orange County season 10.

While attending the MTV Movie and TV Awards last week with Teddi Mellencamp, who admitted that it was “exhausting” having to hide from “certain Housewives” they’ve mentioned on their podcast, Tamra detailed her encounter with Teresa and Luis before confirming he’s a RHOC fan, explaining why she’s currently feuding with Vicki, and reacted to being named as one of the “worst dressed” celebrities at the show.

“Of course, who are we behind in the press line? No other than Teresa. And I’m like, ‘Oh my gosh, are you serious? Great, oh great,’” Tamra recalled on the June 7 episode of Two T’s in a Pod.

In recent weeks, Tamra and Teresa have made headlines, first for Tamra’s comments comparing Luis to Brooks and later due to Teresa’s decision to unfollow her on Instagram. But, when they came face to face at the Los Angeles event, Tamra said Teresa “was very kind.”

“The Teresa thing… I was wrongly accused by the press,” Tamra said, denying she was speaking negatively about Luis.

“I kept looking over, like, ‘Oh, sh-t, it’s coming any minute.’ And I was kind of by myself for a second and Luis came up and he’s like, ’Tamra, hi, its so nice to meet you,’” Tamra revealed.

According to Tamra, Luis was “so sweet,” asking her about her husband, Eddie Judge, her son, Ryan Vieth, and her gyms.

“Obviously he watches the show. So I said, ‘You do know Teresa’s kind of mad at me right now and I’d love to explain that that’s not what I said. I wasn’t saying anything bad about you,'” Tamra recalled. “[And] he’s like, ‘It’s all good. Don’t worry about it. It was a misunderstanding.’ I’m like, ‘Okay.’”

Then, later, Teresa leaned over to her and said, “Don’t worry about it. It’s no big deal.”

“I was glad that was all squashed, we took pictures, everything was fine,” Teddi added.

As the podcast continued, Tamra revealed that during her night out, she ran into fellow reality star Clare Crawley, of The Bachelor and The Bachelorette, who informed her that Vicki is mad at her before calling the RHOC alum on FaceTime.

“She starts going, ‘Vicki’s not happy with you.’ I said ‘Why?’ ‘You didn’t go to her birthday party.’ I go, ‘I know… I can’t just take off and go to Mexico. I have a daughter in school that doesn’t drive. I have two businesses. I have a podcast. Sorry.’ So she had a party in Orange County and it just so happened that we had a dinner party for Eddie for his birthday that night. So I couldn’t go. We’d already talked about it but this girl was trying to bring it up.”

Although Tamra said she texted Vicki an article about the news of Luann de Lesseps and Sonja Morgan‘s reported Simple Life-style reality show, she didn’t hear back.

“I literally text over the article where Luann and Sonja have signed a deal [for their own show],” she shared.

Tamra also reacted to being deemed as one of Daily Mail’s top three “worst dressed” celebrities at the MTV Awards, noting that while she didn’t feel she was styled poorly, there may be a bit more to it.

“It was me, [Erika Jayne], and Lisa Rinna, which I didn’t think any of our outfits were horrible so I reached out to my friend that works at the Daily Mail and I said, ‘What is this sh-t? I liked it.’ And he goes, ’They love screwing with Housewives.’ So he basically said… it’s like clickbait,” she explained.