Home Real Housewives of Atlanta News Kenya Moore Says She Wants Marlo Hampton Off RHOA, Claims She “Used” Family for Storyline, and Calls Her a “Heartless Devil,” Plus Live Viewing

Kenya Moore Says She Wants Marlo Hampton Off RHOA, Claims She “Used” Family for Storyline, and Calls Her a “Heartless Devil,” Plus Live Viewing 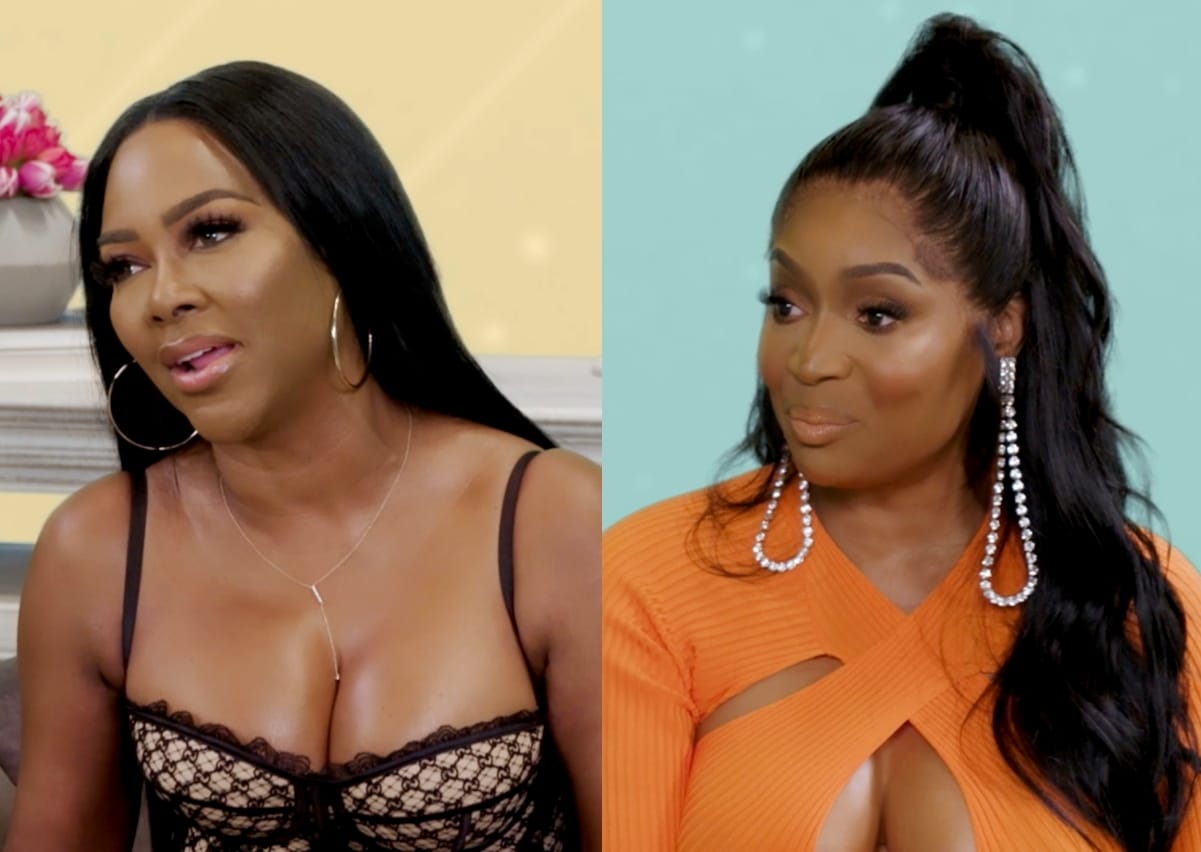 Kenya Moore took to her Twitter page amid the first installment of The Real Housewives of Atlanta season 14 reunion on Sunday night to throw some major shade at her co-star.

As Marlo Hampton opened up about her traumatic childhood and absentee mom, Kenya responded to a fan who accused host Andy Cohen of attempting to get redemption for Marlo while also commenting on Marlo’s victim persona and ongoing cycle of gaslighting.

“I see what Andy is trying to do, but it’s not going to work. Marlo can’t redeem herself after her performance this season. She was vile and problematic AF,” entertainment writer Tatayana Yomary tweeted on September 11. 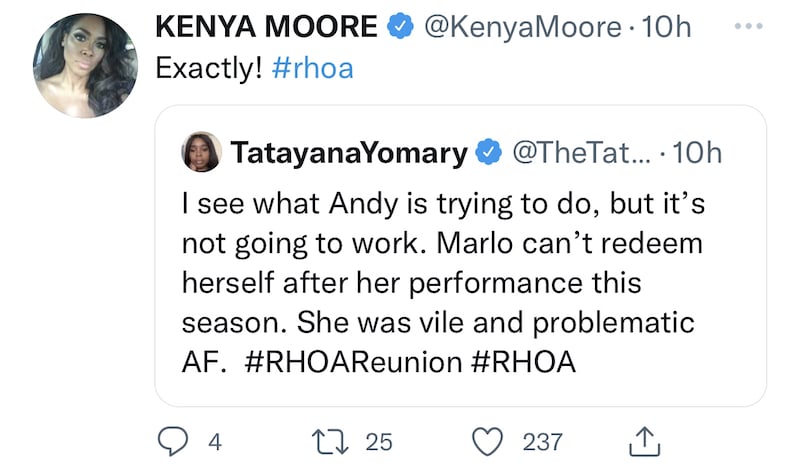 Kenya then responded to a fan who mentioned Marlo’s victimization and put a spotlight on her gaslighting.

“It’s hard to paint Marlo with a victim brush when she has shown zero growth with her nasty behavior. It’s below the belt —> apologize —> gaslight —> nasty shade then the cycle repeats itself. It’s exhausting. She needs therapy and a new friend group!” the fan declared.

“And a new show,” Kenya added. 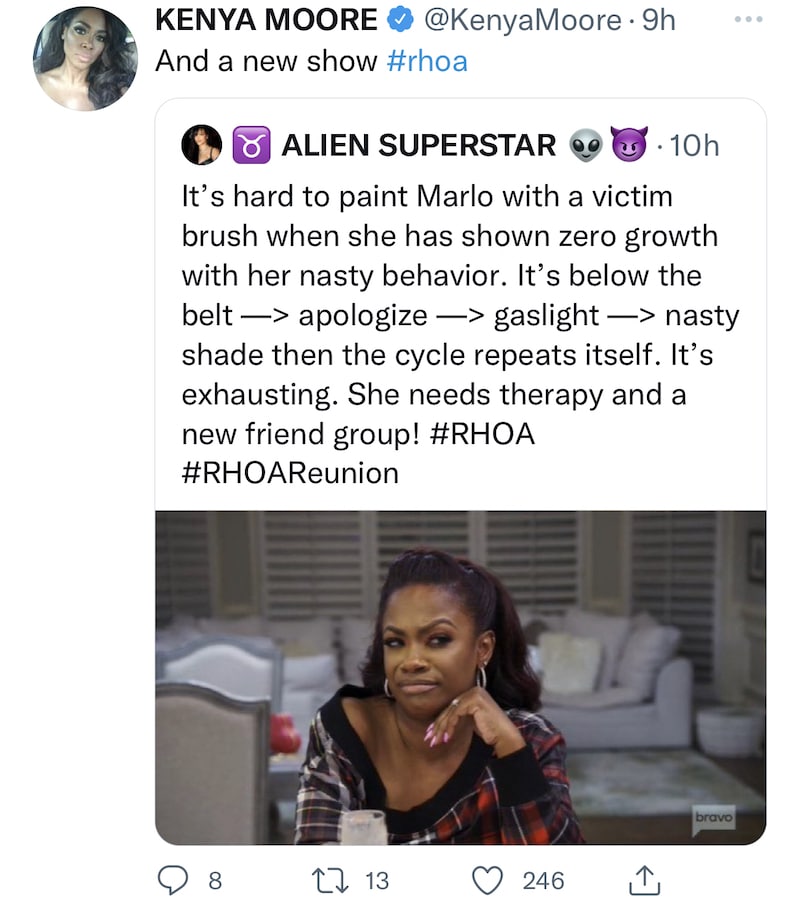 Another person on Twitter said that Marlo seemed to have made a habit of turning on the tears anytime her bad behavior was mentioned.

“Every time anyone tries to hold Marlo accountable for her disgusting behavior, she starts crying about her trauma like she has a monopoly on trauma,” the person noted, prompting Kenya to react with the “facts” hashtag. 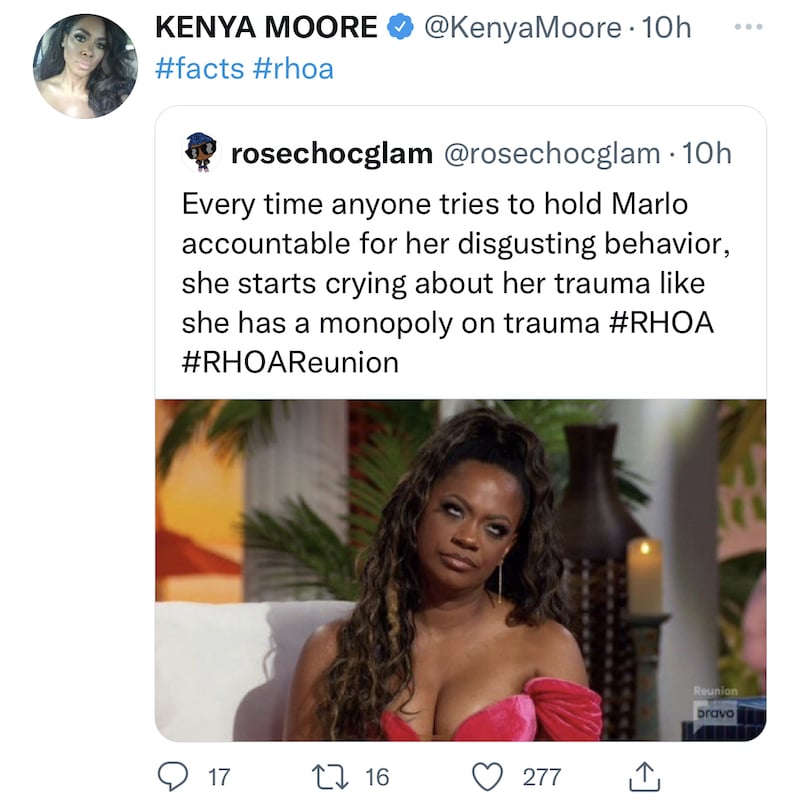 And Marlo’s tears continued to be a hot topic on Twitter amid Sunday’s RHOA.

“Marlo crying about her mom, but throws it in Kenya’s face that she doesn’t have a mother. Kenya probably gives no f’s about Marlo’s tears,” a viewer stated, giving Kenya another opportunity to take aim at Marlo’s season 14 storyline, which included not only drama with her mother, but a temporary, and self-inflicted, estrangement from her nephews.

“I actually feel bad for the family to be used that way,” Kenya responded. 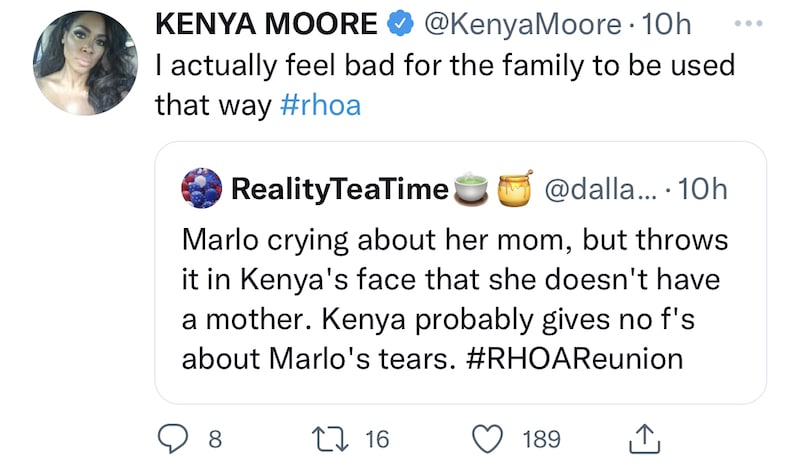 Someone else also gave a nod to Marlo’s family drama, saying, “Now that Marlo has given us the details of her past, I am even more confused as to why she kicked her nephews out of her house.”

But Kenya didn’t seem confused at all.

“Hmmmm,” Kenya replied, along with a hashtag for “heartless devil.” 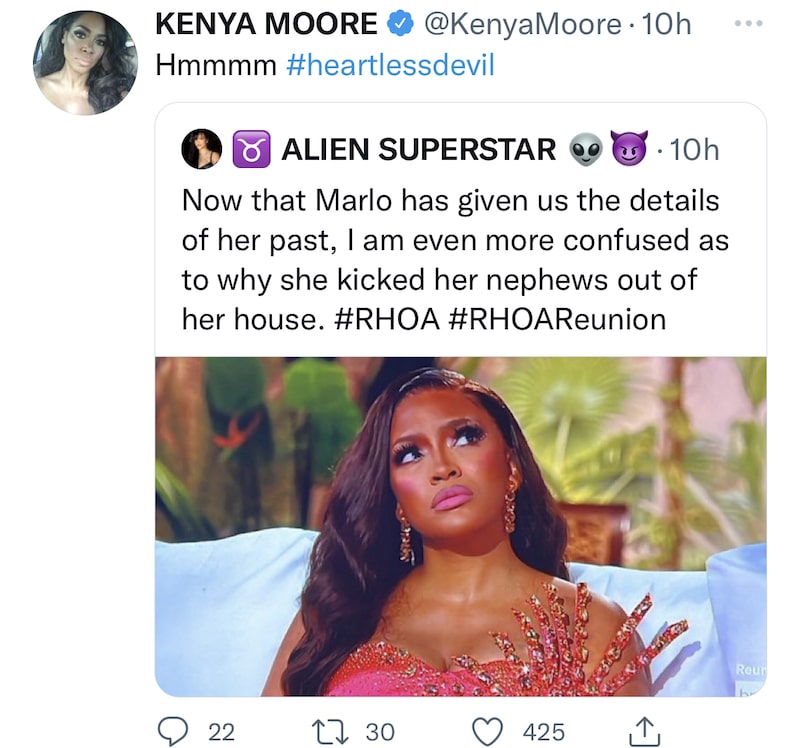 Also, on Twitter, Kenya reacted to a RHOA viewer who took issue with Marlo suggesting that Kandi Burruss doesn’t help people — even though she attempted to set her up with her own show years ago.

“Is Marlo stupid? Kandi telling her husband who produces about Marlo having a show is helping. [Todd Tucker] wouldn’t have been thinking about you if Kandi didn’t bring it up. Dumb a–,” they wrote. 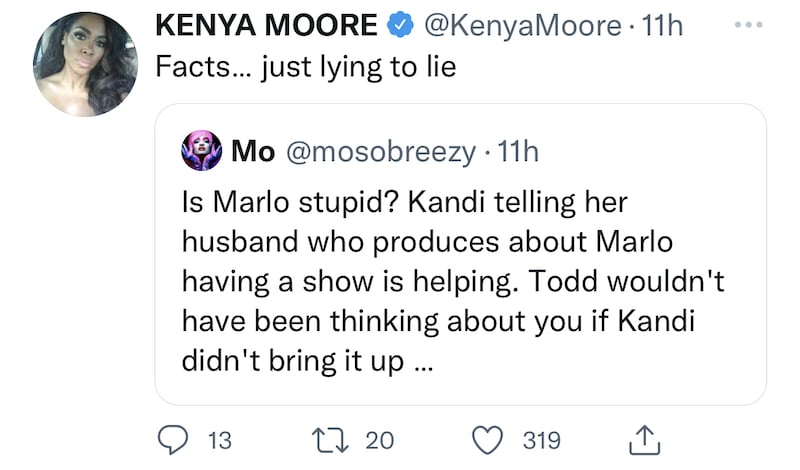 The Real Housewives of Atlanta season 14 reunion continues with part two this Sunday, September 18, at 8/7c on Bravo.