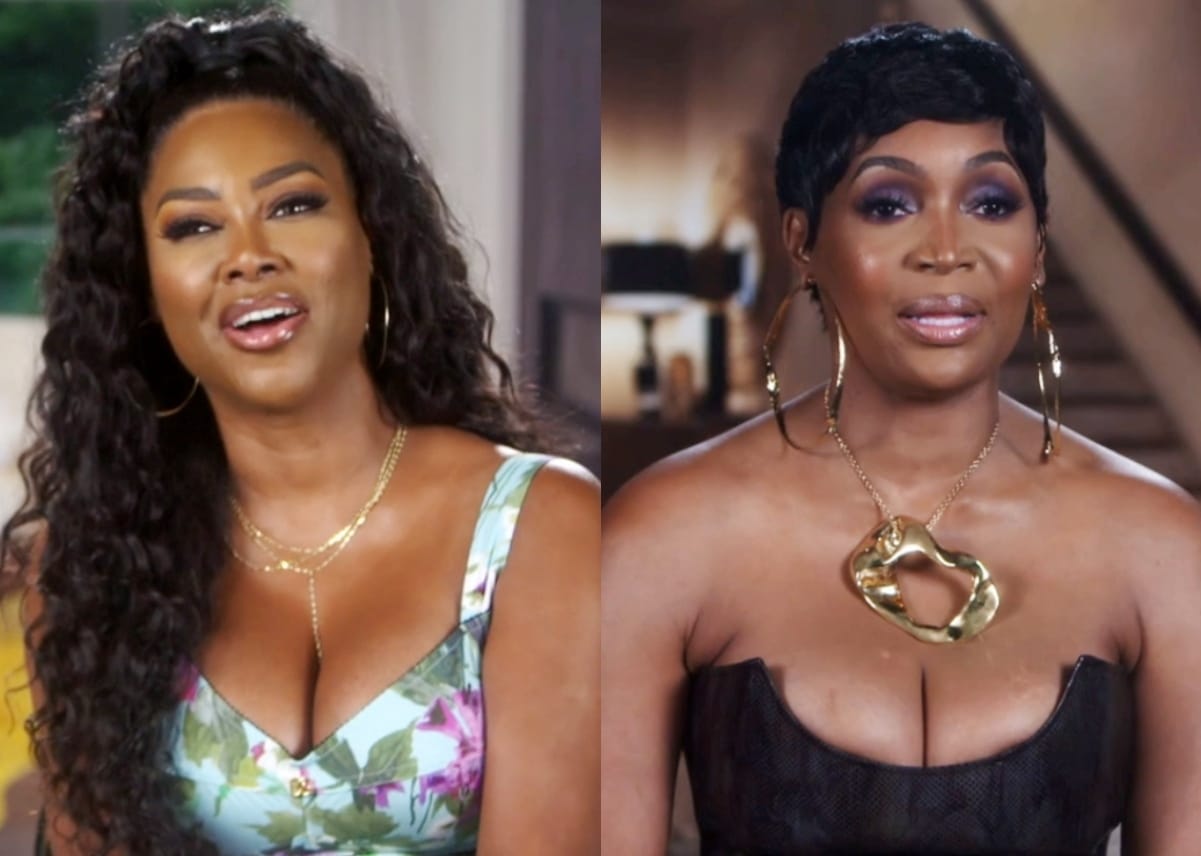 Kenya Moore took to her Twitter page recently to call out Marlo Hampton for suggesting their Real Housewives of Atlanta co-star, Kandi Burruss, is only known locally amid the series’ recent episode.

Before throwing shade at “thirsty” Sanya Richards-Ross for making it clear that the cast’s trip to Jamaica was for couples amid her divorce from husband Marc Daly, Kenya accused Marlo of lying for attention.

“Even if you don’t like [Kandi Burruss] or have your own opinions you can agree she is not just locally known,” a fan had written on Twitter of the longtime RHOA cast member, who is on the cusps of an E.G.O.T. (Emmy, Grammy, Oscar, and Tony Award) due to her massive success in the entertainment industry. 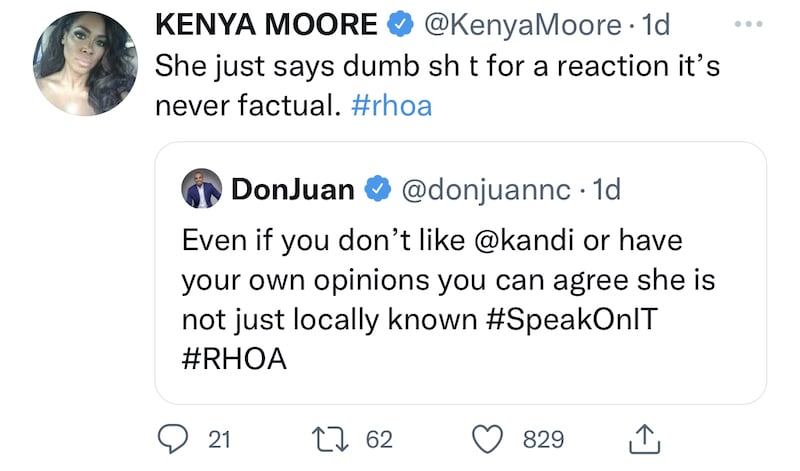 Moving on to Sanya’s phone call, in which the newbie uttered the word “couples” a number of times before Kenya hung up on her, Kenya shared a message from a viewer.

“Sanya mentions [couples] trip [five times] to a single woman on the phone then wonders why Kenya was over it [and] ended the call lol,” the retweet read.

Kenya then responded to another fan who mentioned the conversation.

“Sanya wanted a moment with Kenya and that was a guttersnipe tactic from Marlo’s book. She knows damn well Kenya is not only single but going through a divorce. Thirsty and wrong team Sanya,” the viewer had posted, likely giving a nod to Sanya’s potential alignment with Marlo. 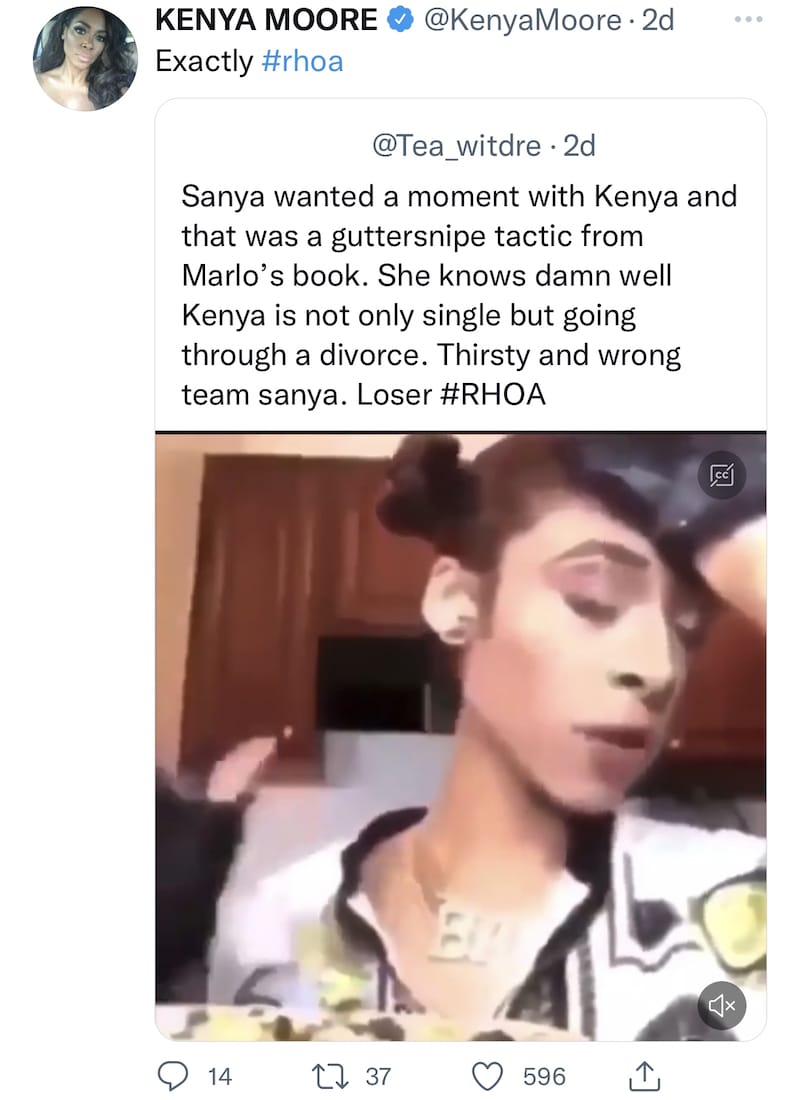 Another person pointed out that they didn’t appreciate the way in which the cast was treating Drew Sidora.

“Drew can sing sing I love it. I wish they stop trying to bully her and nobody in the group defends her,” the fan wrote. “It’s mean.”

But according to Kenya, she’s had her castmate’s back against the other women. 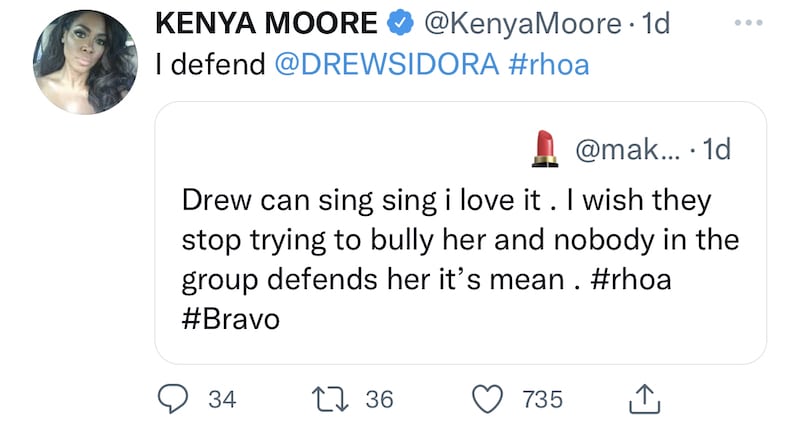 Kandi was also active on Twitter amid Sunday’s show and made a point to react to the editors’ mention of what her husband, Todd Tucker, owned prior to their marriage.

“Gotta love it when [Bravo TV] is the shadiest housewife,” a fan wrote, along with a screenshot that noted Todd had just a condo in New Jersey while Kandi had numerous other assets, including homes and successful shows.

“They so shady,” Kandi agreed. 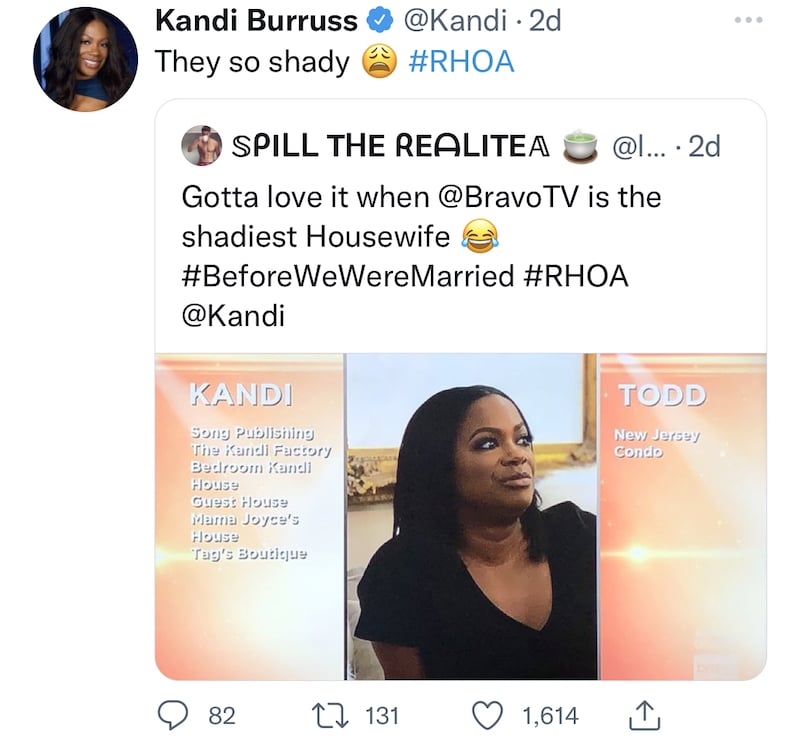 Also on Twitter, Kenya reacted to a fan who suspected Marlo had turned against Kandi for having Kenya’s back.

“Obviously, Kandi took up for Kenya last week and production just edited it out. Why else would Marlo says she’s ‘disappointed’ in Kandi again??” the person wondered.

“No, she felt like she was right and anyone siding with me was wrong,” Kenya clarified. 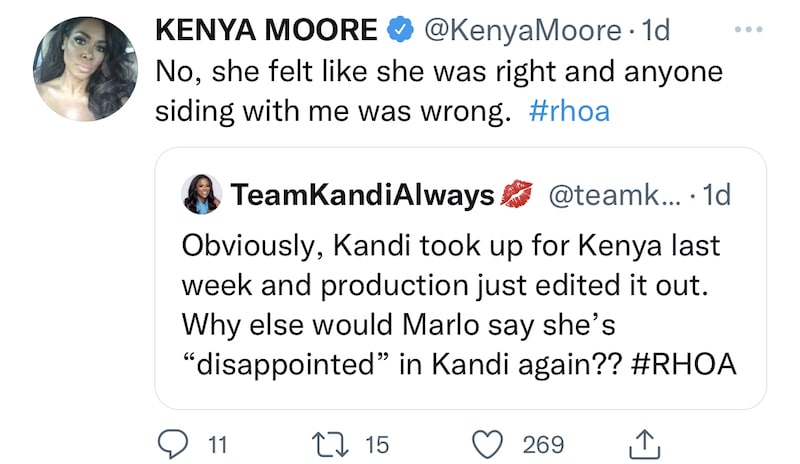