RHOBH’s Lisa Rinna Accuses Crystal of “Omitting” Parts of Kathy’s Meltdown, Suggests There’s More to Be Revealed, and Claps Back at Claims of Hypocrisy 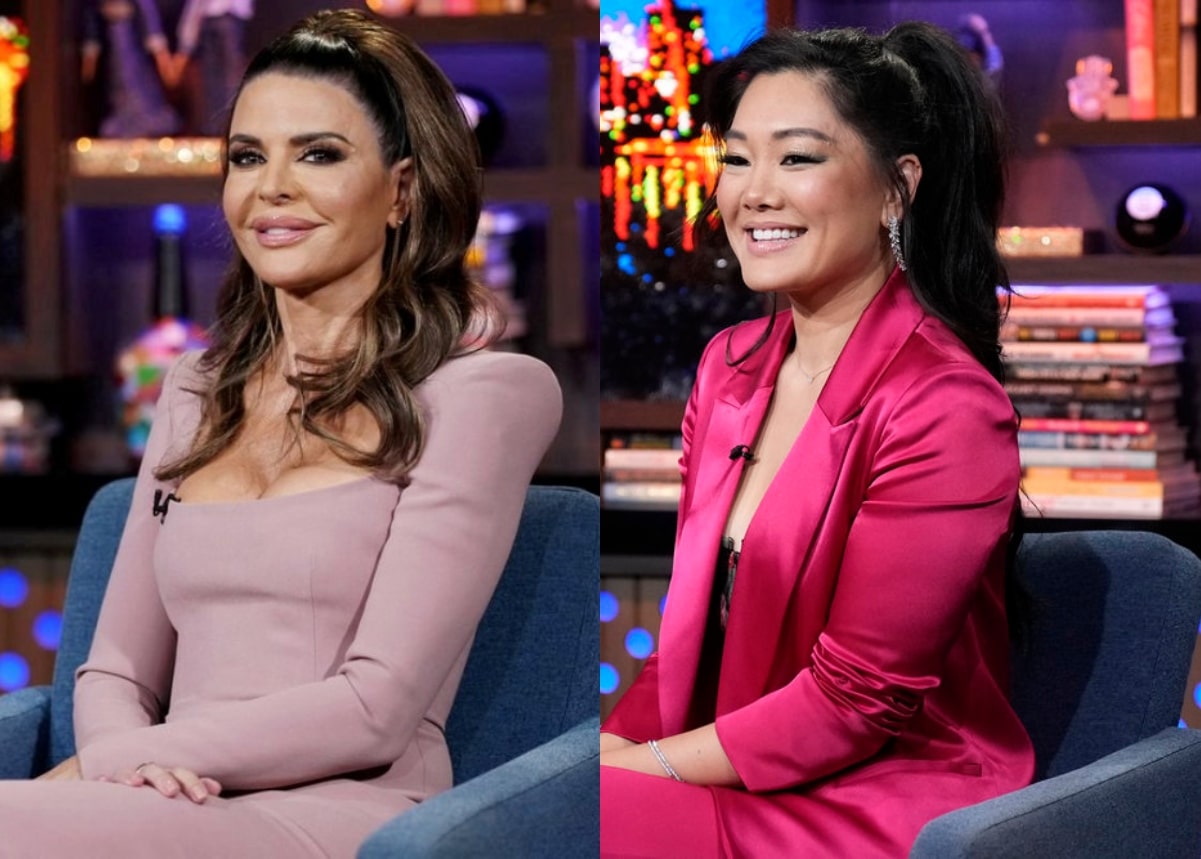 Lisa Rinna shared a poignant statement against Crystal Kung-Minkoff on Friday morning, accusing her Real Housewives of Beverly Hills castmate of leaving key details out of her recollection of Kathy Hilton‘s meltdown in Aspen.

As Crystal proclaimed, “I believe Kathy,” in a cast confessional on Wednesday night’s episode, Lisa took to her Instagram Story, where she told her fans and followers that she found it “funny” that Crystal had omitted certain aspects of the story and addressed claims of hypocrisy.

“Crystal was helping me take [Kathy Hilton] out of the Caribou Club. Crystal was the one who called the Sprinter van. She ended up calling me on our way out and saying go ahead take Kathy because she could not get her coat from the coat check in time and I was wearing my coat. And we were trying to get [Kathy Hilton] out as quickly as possible,” Lisa said in her September 30 statement. “Funny how Crystal is omitting all of that.” 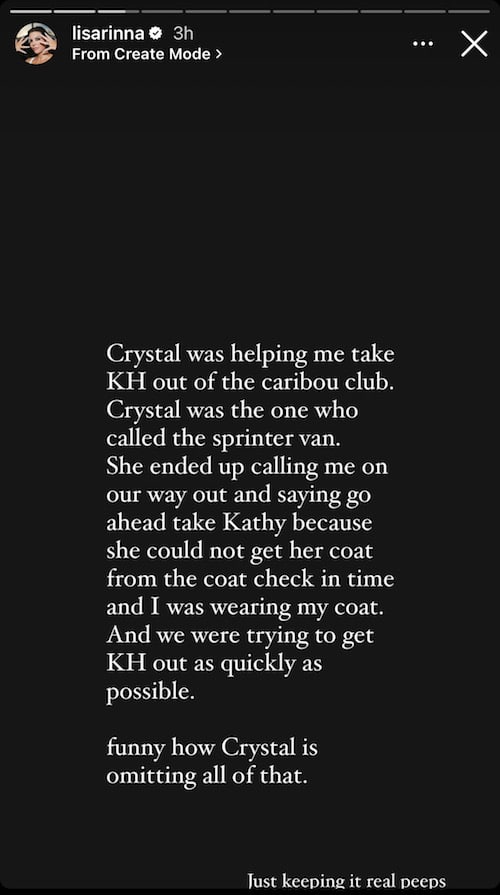 Although Crystal did say in an RHOBH: After Show interview that she and the rest of the cast were unable to get their coats from coat check and encouraged Lisa to take Kathy home herself, she didn’t say anything about the urgency — and instead, as Teddi Mellencamp previously noted, acted “like she didn’t see it happen.”

Around the same time she shared her message about Crystal, Lisa added another post to her account in which she changed the subtitles of Crystal’s confessional from “I believe Kathy” to “I believe Lisa Rinna.” 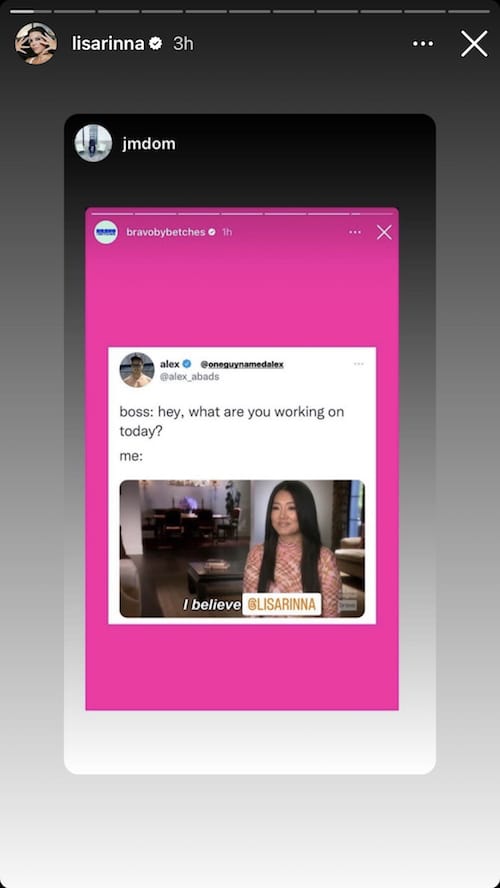 She then shared a screenshot from Wednesday’s episode of RHOBH, in which she was seen looking at Kathy as she confronted her about the horrible things she had said about Kyle Richards amid her Aspen outburst.

“The look you give when you’ve held their feet to the fire and they admitted to a lot of what they had done, but not all of it,” Lisa wrote in the caption, suggesting there’s more to the story than fans have heard. 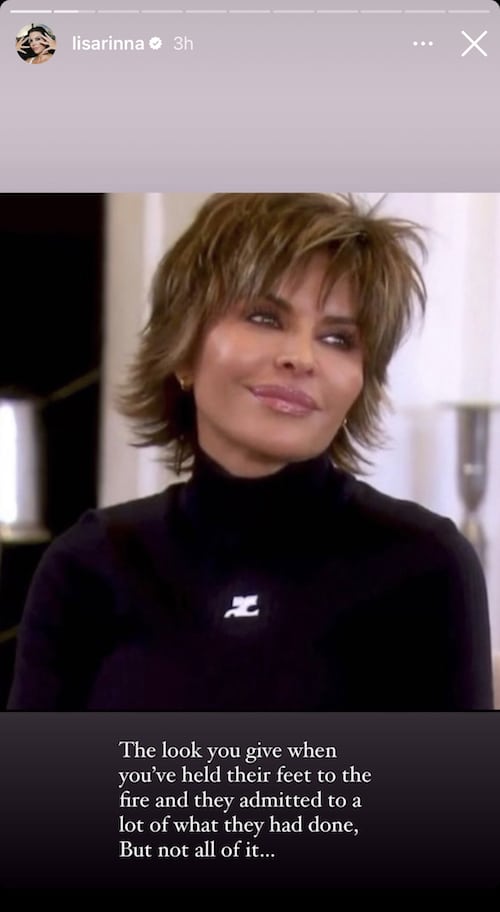 Lisa then clapped back at claims of hypocrisy, which have been uttered by Kathy and Camille Grammer, noting that while she went after Kim Richards in Amsterdam, she wouldn’t hesitate to do it again, especially in matters of family.

“And yea if you come for my husband [Harry Hamlin] I will go ballistic on you. Every. Single. Time,” she declared. 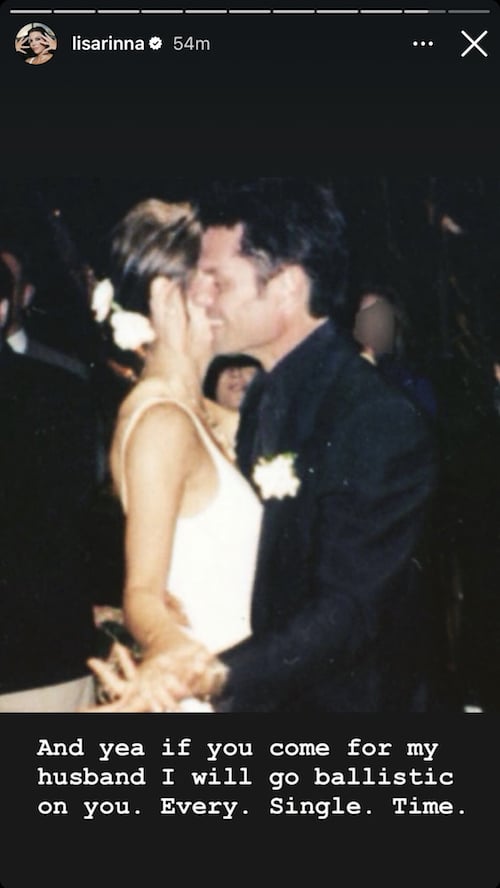 In a final IG Story, Lisa shared a message from Friedrich Nietzsche.

“People don’t want to hear the truth because they don’t want their illusions destroyed,” it stated. 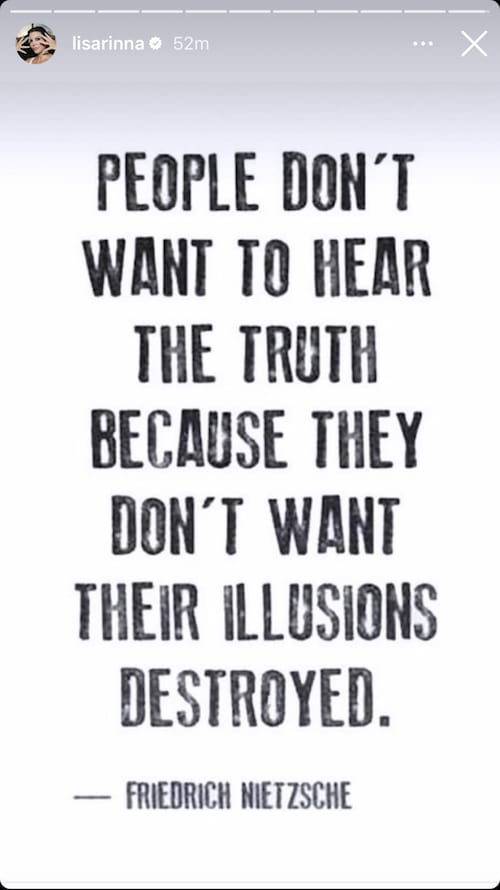