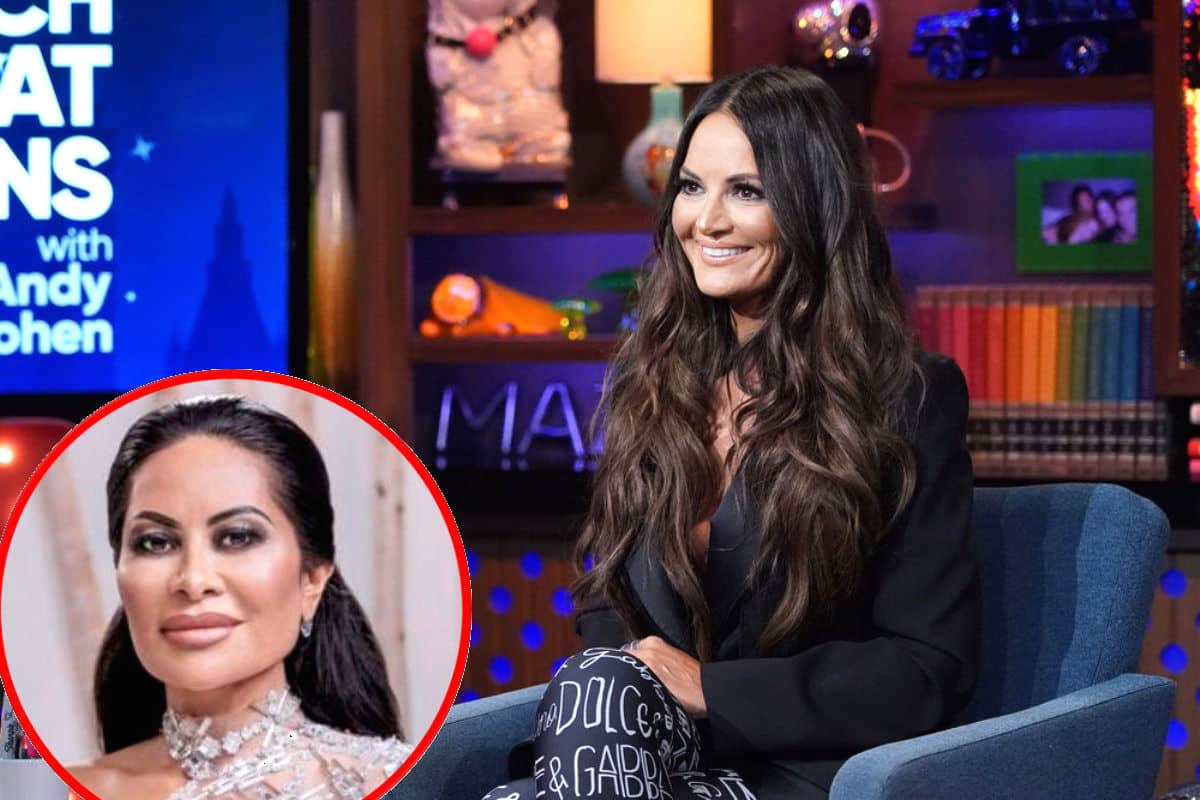 Lisa Barlow shut down claims of having used the n-word against Jen Shah‘s sons on Wednesday night on Twitter.

Amid the latest episode of The Real Housewives of Salt Lake City season three, Lisa shared a number of messages with her fans and followers, one of which mentioned the rumors she spread about Meredith Marks. She also shared messages about the work ethic of her son, Jack Barlow, who was seen questioning his future in college, and more.

“Lisa is so obsessed with saying the wrong thing,” an RHOSLC viewer wrote on Twitter on October 12.

But after another fan said, “This proves she 100% called [Jen’s] child that nasty word,” Lisa insisted she used no such slur, as Jen had previously implied.

“I did NOT and would NEVER,” Lisa replied. 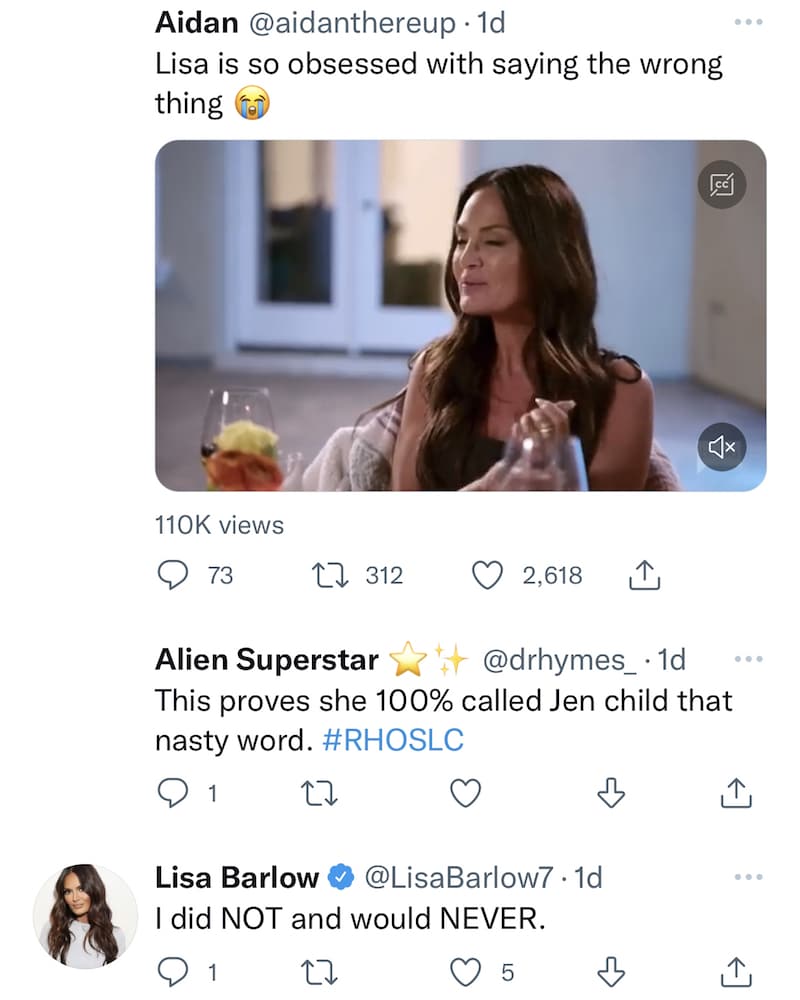 Lisa then reacted to a fan who provided a screenshot from the latest episode and mentioned how Lisa claimed that she didn’t make up the things she said during her infamous hot mic rant against Meredith in season two.

“I didn’t make it up. I repeated what was said over and over again. Producer asked me because at dinner in [Arizona], Meredith said, ‘You made this up.’ I was sorry for repeating and apologizing for what I said,” Lisa explained, along with a clip of WWHL in which she was seen naming Jen as the source of the rumors.

In another tweet, Lisa shared a series of photos of herself and her family, telling her online audience the images depicted “things that trigger.”

One of her followers then seemingly targeted Jack’s hesitancy to go to college, asking, “Is your son constantly triggered then?” In response, Lisa made it clear that her son’s thoughts about furthering his education weren’t indicative of his work ethic.

“No. He works hard,” she responded. 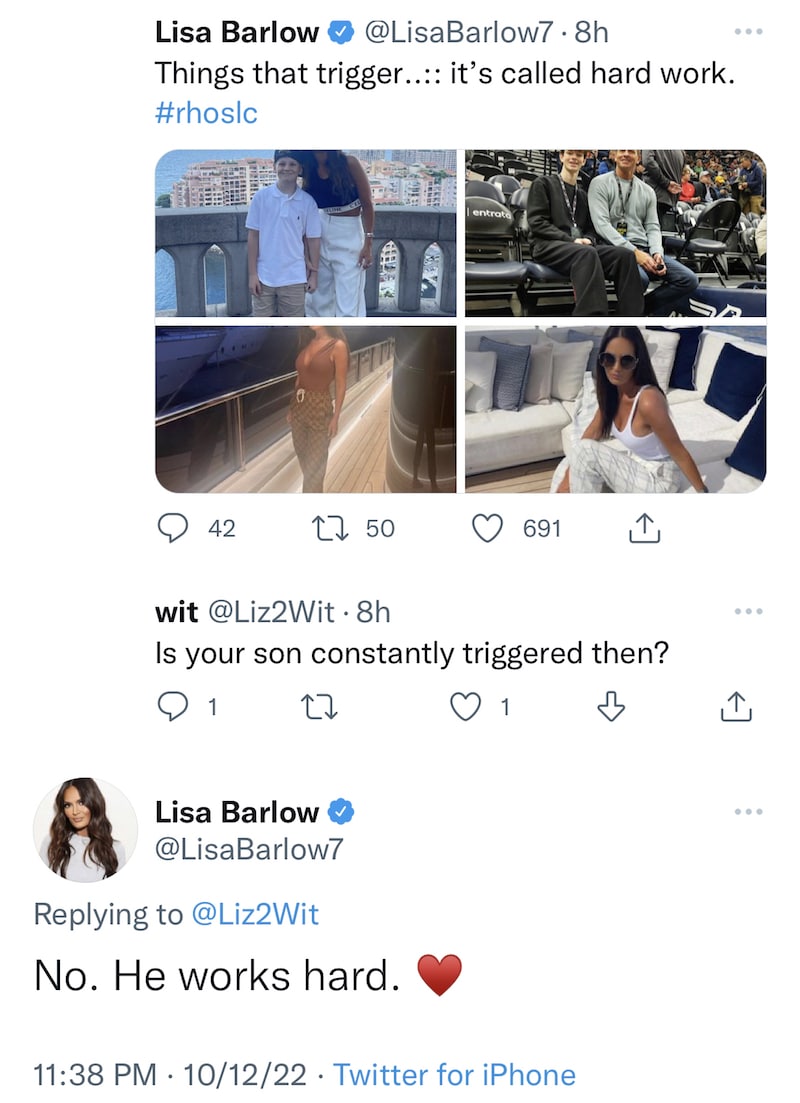 Also on Twitter on Wednesday night, Lisa responded to a fan who compared Meredith to Real Housewives of Beverly Hills newbie Diana Jenkins, who is rumored to be exiting the show after getting on the bad side of a number of her castmates.

“Meredith is falling into the Diana trap. You are coworkers and have to move forward in some capacity or the show doesn’t work. No one wants to watch you force another Housewife to grovel all season!” the fan had said.

“Exactly,” Lisa agreed. “It’s confusing in clips. She basically said admit you made it up and lied. In interview I was asked if I made it up- I said, ‘No, I didn’t make it up.’ I’m guilty of repeating it and apologize for ever saying it. Watch [season two] van convo dinner in Zion and VIDA party ending.”

And after the same fan thanked Lisa for “clarifying” her drama with Meredith and Jen, who allegedly prompted her hot mic moment, she shared two heart emojis and a praying hands emoji. 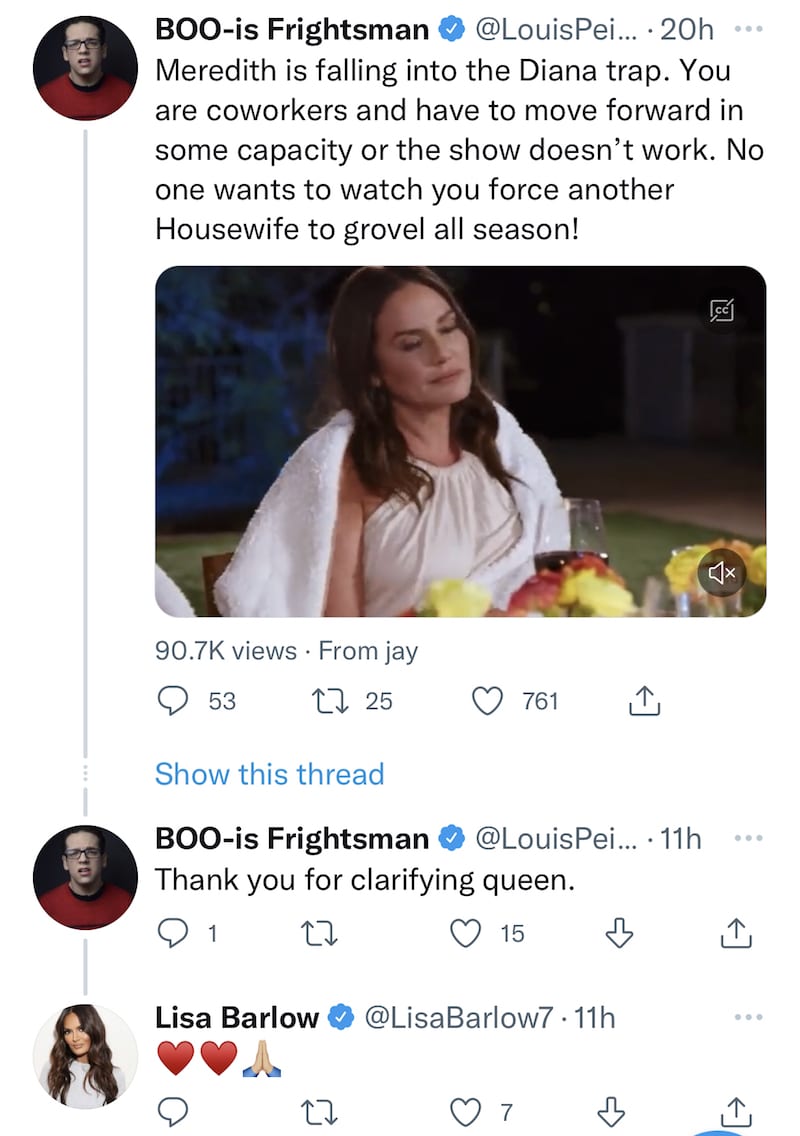