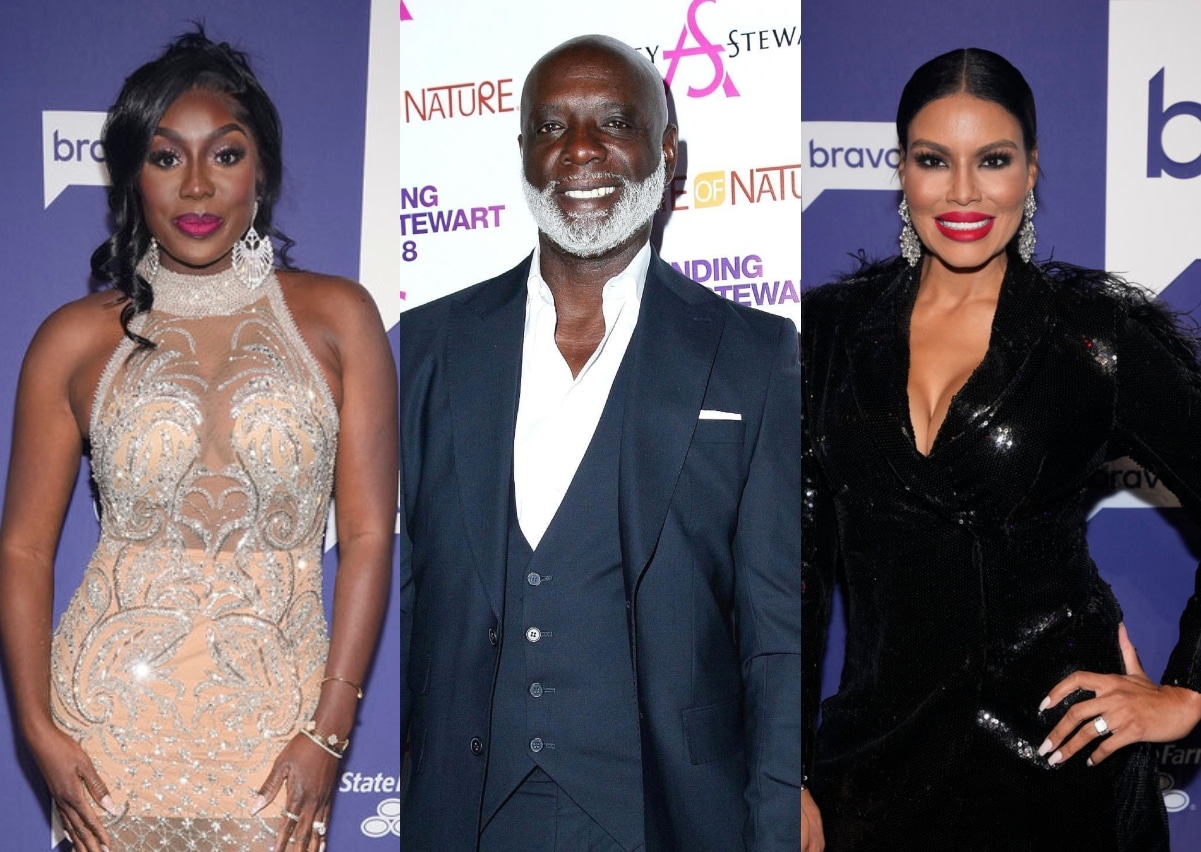 Wendy Osefo was seen telling all about Peter Thomas on Sunday’s episode of The Real Housewives of Potomac.

After she and Mia Thornton erupted in a fight that ended with Mia throwing a glass of water in Wendy’s face during last week’s episode after arguing about Wendy’s apparent beef with the Real Housewives of Atlanta alum Cynthia Bailey‘s ex-husband, Wendy revealed Peter had some not-so-nice things to say about Mia prior to their Miami encounter at his Bar One venue.

“Let’s keep it real,” Wendy told her castmates, Ashley Darby, Karen Huger, and Candiace Dillard-Bassett, in a clip shared by Page Six of the November 27 episode. “Peter told me that him and G [Thornton’s husband, Gordon Thornton] and Mia used to go on vacations together, but Mia did some snake sh-t to Peter’s girlfriend at the time.”

“So all this, ‘Peter’s my brother?’ Since when is Peter your brother?” she continued. “Because last time I checked, Peter told me that he stopped messing with y’all.”

Although Wendy previously discussed going into business with Peter on a Nigerian eatery and lounge in Baltimore, their plans were in the early stages. And when she neglected to call him before traveling to Miami, where they spent time at his restaurant, Peter told Mia they had “beef.”

As RHOP fans saw in last week’s episode, Mia threw the glass of water at Wendy as she defended herself against what Mia was saying in regard to her and Peter’s tension.

“I’m hurt because I feel as though no one should violate someone and their space,” Wendy shared. “And she threw a drink at me over Peter?!”

Ashley was equally surprised by Mia’s over-the-top outburst, suggesting in a confessional on Sunday’s episode that Mia may have reacted in such an intense way because she was afraid of what Wendy could share in the future.

“Whatever Wendy knows, whatever Mia did, it must be juicy, because the way Mia turned into Hulk at that table, this is something she doesn’t want anyone to know,” Ashley stated.

As Page Six also revealed, Wendy previously told them that “nothing was said that warranted” Mia to act out in the way she did. And in her own interview with the outlet, Mia seemed to agree, saying, “I do not think that anybody deserves to have a glass [thrown] in their face. I’m not perfect. I make mistakes.”

Mia also spoke out about her behavior on Twitter.

“My actions towards Wendy was [sic] intolerable,” she tweeted. “It’s unfortunate that you all will attack my family, friends and my businesses based on an edited tv show.”

“While I was committed to drama and entertainment, I must do what’s best for [my] brand [and] partners. Much love, Mia,” she added.

Also on Sunday night’s RHOP, before Wendy was seen reflecting on her fight with Mia with her castmates, the fallout from their dispute was featured. Wendy expressed to a producer that she could not remain in the house with her co-star, claiming she was fearful of another attack.

“I’m telling you if it is 3 a.m., I’m going to her room and I’m f-cking her up,” Wendy said, via Daily Mail, before she and Mia were taken away in separate vehicles.

On Mia’s way home from Bar One, she phoned Gordon and told him she needed to get out of Miami. She then expressed frustration with Karen and the rest of the cast’s failure to take her side amid her battle with Wendy. Meanwhile, Jacqueline Blake, who Mia brought to the show for season seven, said in a confessional that she wasn’t on board with Mia’s “ride or die” outlook, noting that both of the women acted inappropriately.

Elsewhere, as the RHOP cast discussed Mia’s desire to leave their getaway early, Wendy made it clear she wouldn’t be upset if she went home.

“She should go home,” Wendy said. “She committed assault. Who throws a drink?”

As Ashley helped Wendy pack and leave the house, Candiace, who was not present for the fight, arrived and expressed disappointment in how Wendy was being treated — and how Robyn seemingly justified Mia’s behavior.

Wanting to make sure Wendy wasn’t feeling alone, Karen invited her to her beach birthday party, which didn’t come as good news to Mia.

“She sat there and said lies,” Mia noted, adding that Karen’s birthday wouldn’t be “peaceful” if she and Wendy crossed paths.

So, rather than stick by her invite, Karen called Wendy back and withdrew the invitation, explaining that she was not the host of the event. Then, knowing that Wendy would be upset about the disinvite, especially after all that happened between her and Mia, a number of the ladies went to check on her. But again, Mia wasn’t happy.

“You guys are going to need a place to stay when you come back, okay?” Mia told Ashley and Candiace.

“That’s some petty sh-t,” Ashley replied. “You are queen petty right now for that. Just to make sure she is okay?”

“B-tch, you need to be glad my black a– even came,” added Candiace, later saying in a confessional, “I am not leaving a house that I was invited to.”

And Mia’s antics raged on at the beach, where she said she didn’t feel she should be throwing a party for Karen, noting that Wendy should’ve done so and accusing Karen of “trying to straddle the fence.”

“You were both wrong, and this woman is off in some hotel where I don’t know,” Karen replied.

Then, when Mia told Karen she had gone to check “on the one who has not owned up to being wrong,” pulling her loyalty into question, Karen responded by saying she doesn’t play “these childhood games.”