Home Real Housewives of Beverly Hills News Lisa Vanderpump’s Feud with RHOBH Castmates Is Due to Their Accusations that She Leaked a Story, Is This Proof that She Didn’t? Plus Lisa Speaks Out

Lisa Vanderpump’s Feud with RHOBH Castmates Is Due to Their Accusations that She Leaked a Story, Is This Proof that She Didn’t? Plus Lisa Speaks Out

For weeks now, there have been numerous reports about Lisa Vanderpump’s estrangement from her Real Housewives of Beverly Hills castmates, with a recent report revealing she hasn’t filmed with them in over a month.

However, the exact cause of this feud had remain unknown until now. According to a new report, the feud stems from an allegation by Lisa’s castmates who are claiming she leaked a negative story about Dorit Kemsley to the media. Lisa is also breaking her silence to speak out about these claims.

If you recall, the drama started after a report came out from Radar Online on September 11 stating that Lisa was very upset with her friend and co-star Dorit due to a rescue dog Dorit adopted from Vanderpump Dogs. According to that report, Dorit ended up giving the dog away to a friend after it bit one of her kids, and that friend ultimately returned the dog to a different animal shelter.

Apparently, this is a major no-no, as the normal etiquette would have been for Dorit to return the dog to Lisa’s dog rescue where she got it from. After this report came out, Lisa did a brief interview with TMZ in which she defended Dorit but shortly after, Lisa stopped speaking to her RHOBH castmates with the exception of Denise Richards. In fact, the last time Lisa was seen filming with the cast was during Denise’s wedding on September 8.

It turns out the real reason for this feud wasn’t just the dog drama, but rather due to Lisa’s castmates accusing her of leaking the dog story to the media.

Reality Blurb had been hearing whispers for a while now that Lisa’s co-stars, which allegedly includes Kyle Richards, Teddi Mellencamp, and Dorit, accuse her during filming of leaking the dog story about Dorit, with at least one of the women even claiming that Lisa “sold” the story to the media. We hadn’t been able to verify how accurate this was, as Bravo is working hard to keep the story-lines under wraps during filming, but a new report by Radar Online today appears to be confirming this.

According to Radar, a Bravo production source has confirmed to them that this leaking accusation will indeed be a major plot-line on the upcoming season of the show.

“Lisa leaks like a sieve!” one anonymous cast member tells Radar, with another source adding that “the bad blood between all the costars is off the charts.”

Radar Online also took the extraordinary step in their article of stating Lisa was NOT the source for their story.

Radar boss Dylan Howard released the following statement: “I can say unequivocally that Lisa has never been an anonymous source to the site — although I for one wish that she was! She’d be as rich with information as she is rich is real-life!”

Following the statement, Lisa responded after one of her fans brought it to her attention.

“Thank you for that….Apparently guilty before being proved guilty. Truth prevails. Always,” tweeted Lisa on October 20. 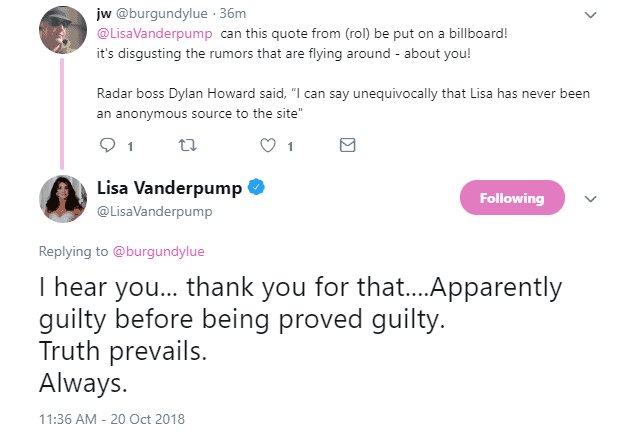 It is currently unknown how Bravo plans to handle this situation on the upcoming season of the show. Lisa’s castmate Camille Grammer is also tying the knot in Hawaii today, and Lisa has reportedly chosen not to attend.

There is also speculation about whether this accusation against Lisa could be an attempt by Kyle and Dorit to deflect from the legal troubles their husbands are currently facing. As it’s been reported, Kyle’s husband Mauricio Umansky is currently facing a major lawsuit in which he is accused of acting unethically when it comes to a $32 million home he sold in 2016. As for Dorit’s husband, Paul PK Kemsley, a lawsuit filed against him by a casino over a $2 million gambling debt recently made headlines.

Additionally, Dorit and PK were also sued by a former business partner of their swimsuit line, Beverly Beach by Dorit, over claims they refused to share profits of the business with him.

The Real Housewives of Beverly Hills season nine is expected to premiere on Bravo TV later this year.

TELL US  – THOUGHTS ON LISA’S CASTMATES ACCUSING HER OF LEAKING A STORY?

[Editor’s note – Just from working in this field and knowing how these things work, I must say it is highly unlikely that Lisa was the source of the Radar article. When someone of Lisa’s caliber wants to leak a story, they tend to go with more mainstream outlets such as TMZ or PEOPLE. My original suspicion was that the Radar article was possibly leaked by a production source to stir up drama during filming. This is however just a guess as I have zero inside information on who leaked the story to Radar.]