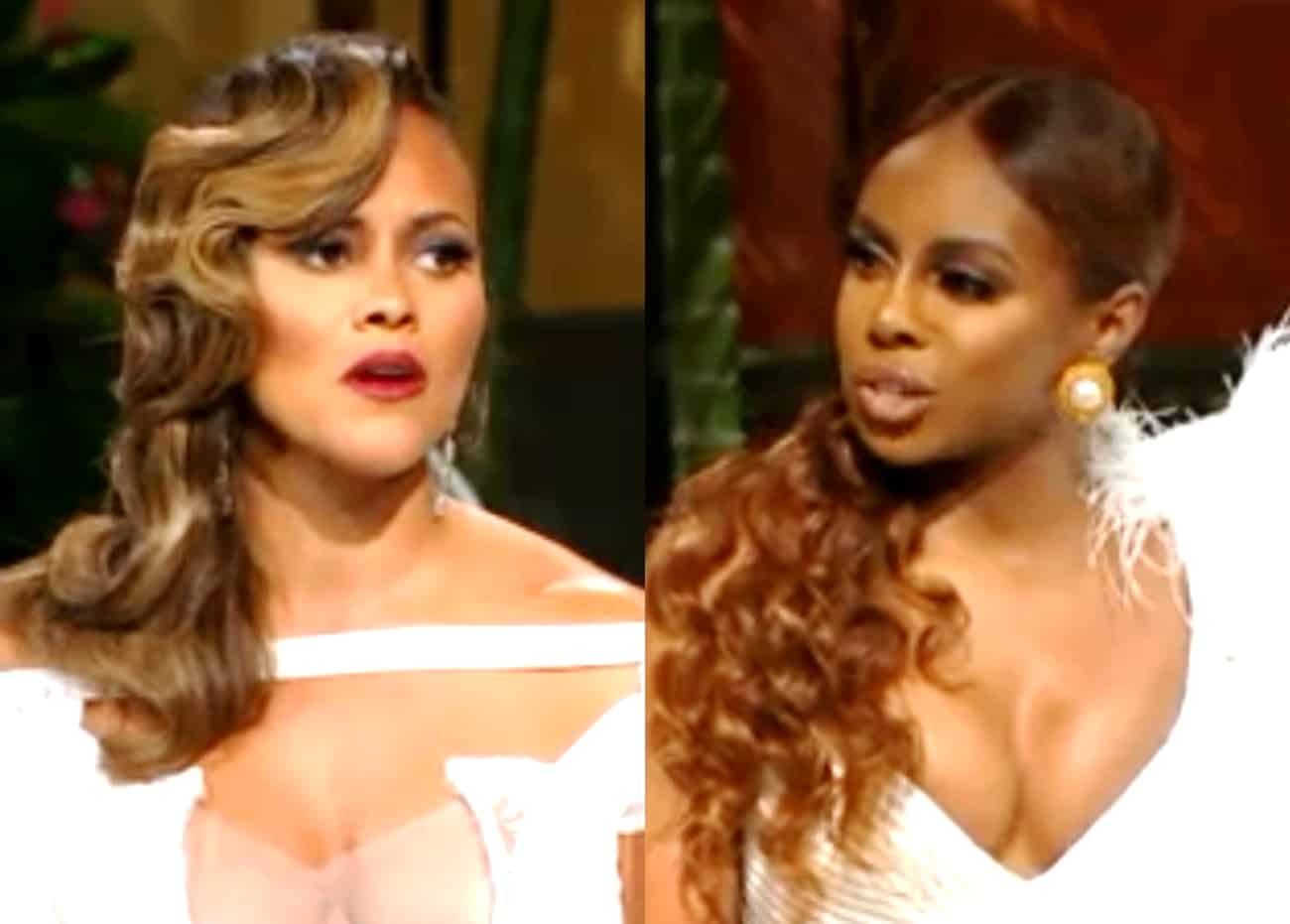 The ladies of The Real Housewives of Potomac took to the couches last night to rehash what was arguably the most explosive season yet, and it didn’t take long for the sparks to start flying.

As always, host Andy Cohen kicked off the reunion by greeting each of the women and quickly catching up with where things stood in their lives since the season concluded.  We were treated to pictures of both Ashley’s new baby, Dean Michael, and Monique’s rainbow bundle of joy, Chase.  Both are absolutely scrumptious, and I for one can’t wait to see more of them next season.  Despite their many challenges this season, Ashley reported that Michael was shaping up to be an ‘amazing’ father.

Ashley also revealed that she and Michael no longer owned their restaurant.  She admitted that ‘in hindsight,’ Australian cuisine may not have been the enticing draw they initially hoped it would be.  Among Ashley’s other regrets this season was that horrific wig she sported during her confessional interviews.  She’s a pretty young woman with a beautiful head of hair, so why she chose to wear that unfortunate dark, curly wig was one of the biggest mysteries of the season!

Karen reported that she’s living back in Potomac, after having left the posh neighborhood a couple of seasons before.  The move may not be permanent, though, as she reported that she and her husband, Ray, had leased the home with ‘a very large option’ rather than choosing to buy it.

As for Gizelle,  she reported that she hadn’t been in contact with her ex-boyfriend, Sherman, in several months, and when she recently ran into him in the gym, they hadn’t spoken.  Viewers will recall that the couple split after Sherman continued to play games with Gizelle.  He ultimately let her down by refusing to attend Candiace’s wedding with her.  Gizelle said he stood her up because he wanted to avoid seeing the other woman, particularly Monique, who befriended his ex-wife and chose to share the dirty details that lead up to their divorce with the world last season.

But Gizelle is moving on–or maybe taking a step back into the past–when in to comes to her romantic life.  She revealed that she was being “heavily pursued” by her ex-husband, Jamal, and that she was “open” to his advances.  She seemed very happy, but she added that their newfound romance was a bit “confusing” for their daughters, who had no memory of seeing their parents together.  The other ladies seemed happy, and not at all surprised, as they’d seen the sparks flying between them at a recent event.  But leave it to Karen to throw some back-handed shade on the situation.  She said that ‘if Gizelle could make it work with anyone, it was Jamal.’

Of course, Karen was likely only getting back at Gizelle for the many shady comments she’s made to her over the season–starting with that trip to New Orleans, when Gizelle seemed to doubt Karen’s grief.  The trip came soon after the death of both of Karen’s parents.  When Karen opted out of a night out on the town with the ladies, saying she wasn’t feeling up to it, only for Gizelle to see her chatting with fans on Instagram Live, Gizelle had accused her of using her grief as an excuse.  Not that she needed one.

Everyone grieves in their own way, of course.  Karen said that she’d only been thanking her fans for their support during such a difficult time and that there was nothing wrong with that.  Gizelle said that she hadn’t actually doubted her grief, but that popping up on social media and laughing it up with her followers just didn’t fit.  She added, however, that she’d only brought it up in a ‘funny’ way, and had meant no disrespect.

Gizelle also doubted the level of Karen’s involvement in her new fragrance line, “La Dame,” saying that she wondered if Karen was just the face of the product, and didn’t really own it, or have any creative control.  Karen put an end to that last night, as well.  She said that she did own it, and she made the happy announcement that the fragrance would soon be available at Bloomingdale’s.

As always, Candiace’s drama revolved around her mother, Dorothy, who joined the ladies on the couch.  Apparently the woman fancies herself the seventh RHOP cast member these days, and she vamped it up as she described the off-camera incident that had lead to her smacking her daughter with her purse at a friend’s wedding.  She acted out the scene in such a way that, as usual, she took no responsibility.  She portrayed the incident as an accident that happened when her daughter’s forehead got in the way when she just happened to widely fling her purse in a “bye girl” gesture, after getting tired of Candiace’s behavior and whining.

Andy mentioned that, accident, or not, the ordeal had clearly upset Candiace, but Dorothy wrote it off as Candiace being a “drama queen.”  The mother and daughter also addressed the question of who truly owned the home Candiace lives in with her husband, Chris.  Candiace brought the sales agreement, which clearly showed both her own name and her mother’s.  But when Candiace added that she and Chris were now making the full mortgage payments with no help from her mother, Dorothy shaded her again by saying “if you say so.”

Of course, they also addressed the knife incident, which Dorothy said she found ‘disappointing,’ although she stopped short at accepting the possibility that Candiace’s extreme behavior might be a reflection on her. But she came to her daughter’s defense when Candiace and Ashley started arguing loudly, and Ashley said once again that Chris ‘lived in his wife’s mother’s house.’  Dorothy stood up for her son-in-law, and she informed Ashley that Chris was not only hardworking, but he also came from a “very prominent family” in his own right.  A family that owns one of the “largest companies” from “here to the tip of West Virginia,” according to Candiace.

After Dorothy took her leave, Ashley and Candiace continue griping at each other.  You see, these two are easily the most judge-y of the crew.  Ashley threw shade at Candiace for living in her mother’s home, which was harsh, but clearly true.  It was also in retaliation for some pretty harsh comments Candiace had made about her.  Candiace repeatedly doubted the validity of Ashley’s attempts to get pregnant, calling out her drinking–something she said a woman who was trying to conceive simply wouldn’t do.  It really didn’t make sense, as a few Coronas aren’t like to stop a woman from getting pregnant.  When Candiace was asked if she now regretted her comments, considering Ashley had just had a baby, Candiace doubled down and said she still felt the same way.  Ashley also shared some tweets that Candiace’s husband Chris had recently posted, which said his wife’s original comments had ‘validity.’

Candiace, of course, also made some nasty comments about Michael, and she called into question his tears about Ashley’s miscarriage during Monique’s rainbow party.  Unfortunately for Ashley, Candiace may have had a point on this one, as just moments after the emotional display, Michael apparently went inside and began shamelessly groping a Bravo cameraman! The ladies didn’t get into what would become the most scandalous part of the season last night, but Michael was making his way to the hot seat when the show faded to black.  And viewers, he was already sweating! Stay tuned…