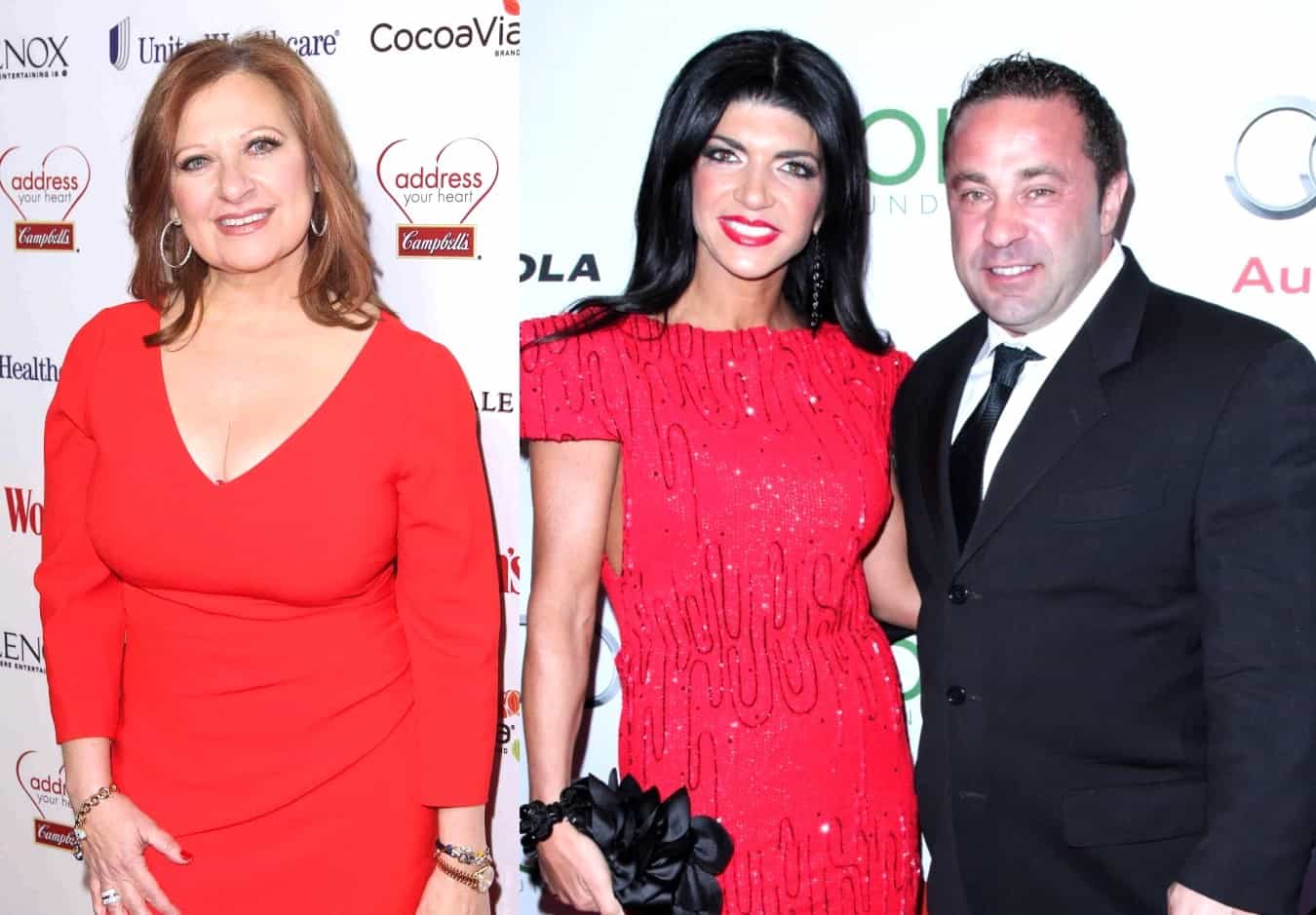 Caroline Manzo is reacting after Teresa Giudice accused her of ‘ratting’ her and husband Joe Giudice out to authorities. Plus, Joe addresses those photos of Teresa out with her supposed “boy toy,” Blake Schreck, which were published earlier his year, and he vented about the Real Housewives of New Jersey star’s behavior during his appearance on Sunday night’s Joe and Teresa Unlocked.

During the interview, Teresa questioned if former RHONJ co-star Caroline might have been behind the prosecutions of her and Joe for financial fraud after host Andy Cohen reminded Teresa that Caroline once predicted either Teresa or Joe would end up in prison, and ultimately Teresa would end up filing for divorce.

“How could she predict that? Could she have anything to do with what happened to Joe and I? Is she a rat?” Teresa wondered, as Joe quickly chimed in to say Caroline was not responsible for anything and that he actually knew who turned them in to the authorities.

Earlier this morning, Caroline took to her Instagram Stories to respond to Teresa’s suspicions in a laughing manner by sharing two clips. In the first video, Caroline sang along to Whitney Houston’s “If You Say My Eyes Are Beautiful.” This was a clear reference to Teresa, who stated in last night’s interview that she could relate to a quote by Sophia Loren which read, “If you haven’t cried, your eyes aren’t beautiful,” as she added, “These eyes have done a lot of crying. I must have the most beautifulest eyes in the world.”

In a second video, Caroline stated, “I don’t typically dance or sing this early in the morning, but I have to laugh. I couldn’t find the word ‘beautifulest’ anywhere. I’m sorry, but you’ll be hearing from me soon.”

RHONJ: Caroline Manzo responds to Teresa Giudice’s accusation, that she called the Feds on Teresa and Joe! #realhousewives #rhonj

Also during the interview, which was done months after Teresa and rumored boy toy Blake were photographed holding hands in Miami before spending time together in New York City, Joe told Andy how he felt when he first saw the images.

“Look, Andy, I’m in here and she’s out there. I don’t know what’s going on,” Joe admitted. “I mean, I’m not happy about it, of course. I don’t like that she took a photo with another man, but I mean, I’ve asked her about the guy. She says that he’s a friend.”

Although Teresa reminded Joe that she had told him about spending time with Blake and his friends in Miami, Joe told Andy that he was unaware that the two of them had been seen together at the beach after Andy asked Teresa if Blake was the man he saw her with during a run-in earlier this year.

“I told you we were everywhere together… with him and his friends. I told you that,” Teresa insisted. “If I was trying to hide it, I wouldn’t leave my hotel room. I wouldn’t be in public… You were photographed with women also. Right, hun?”

“That’s why it made it okay for you,” Joe replied.

“I’m not saying that, but we’re in the public eye. Things like that happen,” Teresa explained, adding that Joe “was photographed with women” when she was behind bars. “Do I feel like he was faithful? No,” Teresa added.

After a judge ordered Joe’s deportation last October, it was rumored that Teresa had reached out to her former Celebrity Apprentice co-star, President Trump, for a pardon. However, during her appearance on Joe and Teresa Unlocked, Teresa said she would “never do that” to the president. Joe agreed that he has too much on his plate to be dealing with the case.

“Even if he could maybe try to do something, I don’t know if he would get criticized. I don’t know what they would do to him,” Joe explained.

As for a future pardon request, Teresa said, “I hate to predict what I’m going to do in the future, but we’ll see… You never know.”

Looking back on his crimes, Joe admitted it was “stupid” of him to not become a U.S. citizen.

“But when you’re raised here as a kid, you go to school here, you do everything here, it’s not a big deal,” he reasoned. “Especially when you’re not a criminal. All I did was bust my a** my whole life, and believe me, I was a hard worker. I broke the law. But when you come in illegally and break the law, it’s worse.”

While Teresa and Joe will soon be back together with their family, that won’t take the sting away when it comes to all of the important events Joe missed with his kids during his time behind bars.

“I was very upset I didn’t get to see my daughter [Gia] graduate high school,” he said. “Bringing her to college. At least out here, I can see her play soccer and FaceTime. I’m pretty close to my daughters. We talk all the time. I’m constantly texting and sending pictures and doing video chats with them, which is good.”