Home Real Housewives of Beverly Hills News ‘RHOBH’ Kyle Richards Confirms She is “Not Feeling Well” After Filming on Season 11 is Halted Over COVID Case, Reveals Teddi Delivered Her Thanksgiving Meal Because She Was “Unable to Cook” Amid Mystery Illness

‘RHOBH’ Kyle Richards Confirms She is “Not Feeling Well” After Filming on Season 11 is Halted Over COVID Case, Reveals Teddi Delivered Her Thanksgiving Meal Because She Was “Unable to Cook” Amid Mystery Illness

Following news claiming production on the Real Housewives of Beverly Hills season 11 has been halted due to COVID-19 concerns, the series’ OG took to her Instagram Stories to reveal that she was so sick on Thanksgiving Day that she could not cook her family a holiday dinner and was forced to get help from one of her closest friends.

“Thank you [Teddi Mellencamp] for dropping off a Thanksgiving meal for my family (at 7 am today) knowing I am not feeling well [and] unable to cook. Thankful for you my friend (my family is too),” Kyle wrote in a November 26 Story. 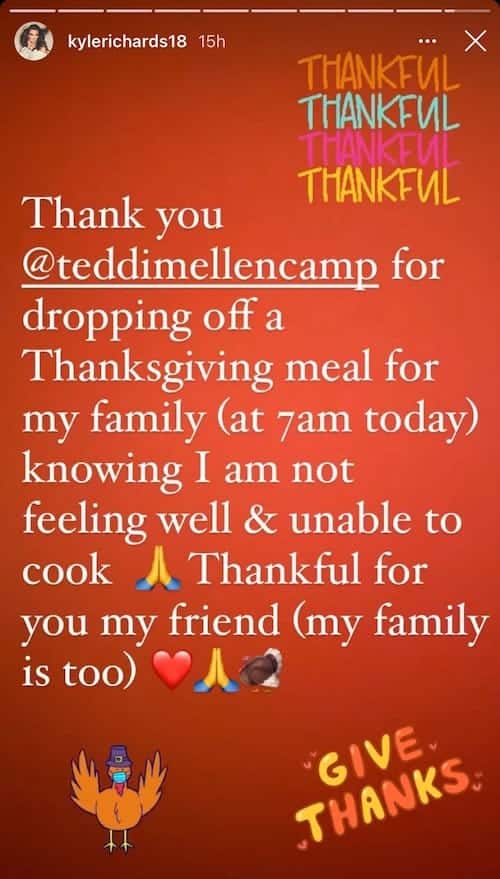 Kyle also shared a second Story on Thursday in which she said that while Thanksgiving 2020 was much different than previous years, she was still feeling grateful.

“While this is a very different Thanksgiving than we are used to, I am nonetheless so grateful for my family, friends, dogs, work… I will not allow 2020 to stop me from reflecting on all of the things that I am so thankful for,” she wrote.

“I hope all of you are staying health [and] safe and have a beautiful day,” Kyle continued, adding the hashtag for “this too shall pass.” 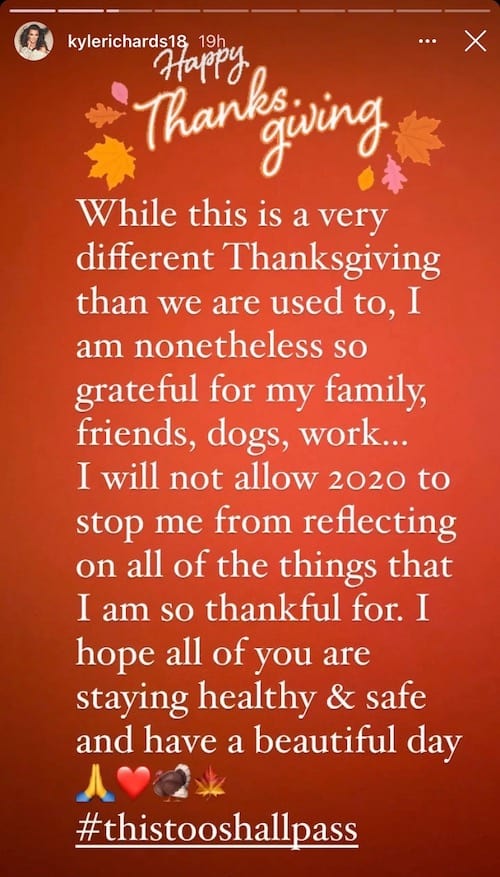 Just prior to the Thanksgiving holiday, an insider confirmed to Hollywood Life that filming on RHOBH season 11 had been shut down, reportedly after a crew member tested positive for COVID-19.

“They filmed yesterday. Everyone’s been told to quarantine for 14 days and haven’t been told much else right now,” the source explained. “They have no idea when they’ll start up again. Everyone’s just waiting for more info.”

As fans may have heard, filming on the new season began months ago with new cast member Crystal Kung Minkoff and rumored “friend” Kathy Hilton.