Jax Taylor wasn’t his true self on Vanderpump Rules.

Months after confirming his exit from the Bravo reality series, Jax admitted to changing himself for production before teasing his potential television return and sharing maternity photos featuring himself and his pregnant wife, Brittany Cartwright.

“Wow what a different Jax. Feeling the good vibes now. What a changed man [you] are.. Well from what I saw on TV,” someone wrote in a comment to Jax on Instagram over the weekend.

“That’s because I was being somebody that the show wanted me to be,” Jax replied.

According to Jax, who was rumored to have been fired from Pump Rules due to his allegedly racist behavior toward Faith Stowers and his supposedly homophobic behavior, he felt relieved after his December 2020 exit from the show.

“I feel like a weight has been lifted. Thank you,” he shared. 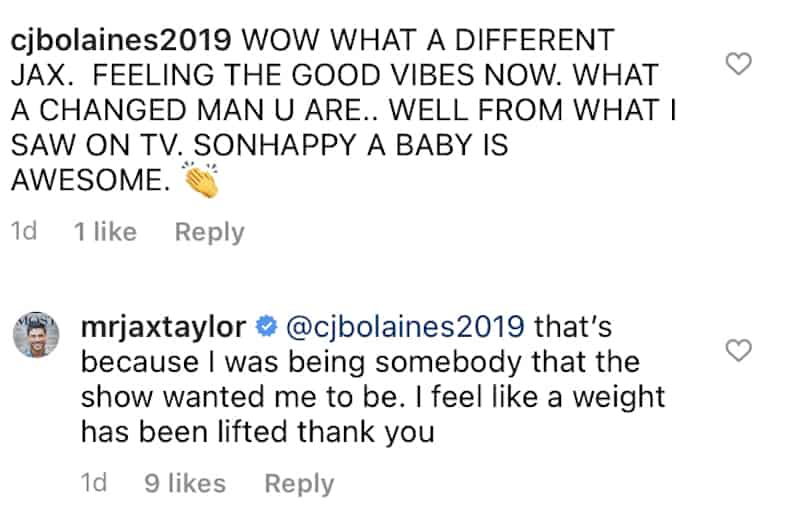 A second fan told Jax she “can’t wait to see where” he and Brittany go after their son’s arrival and mentioned a potential return to television.

“Just wait and see we have a lot going on… We can’t wait to share with everyone,” he teased.

Also on Instagram over the weekend, both Jax and Brittany shared a series of images taken by photographer Patty Othon along with sweet messages for their baby boy.

“My son, my wish for you is simple, have the very best life imaginable, live like you will never grow old, laugh, giggle, cry if you must. Play as hard as you work; make time for the people and things that you adore, may you always have happy dreams that wake you up with a smile on your face And that you always, always know that you are loved more than you could ever imagine. Words can not describe how much we love you already, we have waited our whole lives for you. We are counting the minutes till you arrive. Love mom and dad,” Jax wrote in the caption of his slideshow.

“From the very moment we got a positive pregnancy test we have loved you more than we could ever imagine. I can’t wait to meet you baby boy. You’ve already stolen our hearts,” Brittany wrote in the caption of her post.

Vanderpump Rules season nine has yet to be confirmed by Bravo, but earlier this month, Andy Cohen suggested filming would likely begin soon after SUR Restaurant re-opened, which also happened earlier this month.