Attorney Accuses Erika Jayne of “Not Allowing Witnesses to Speak” and ‘Not Cooperating’ as He Launches Investigation Into RHOBH Star’s Private Jet Ride, Plus Tom Girardi Victims Set Up GoFundMe 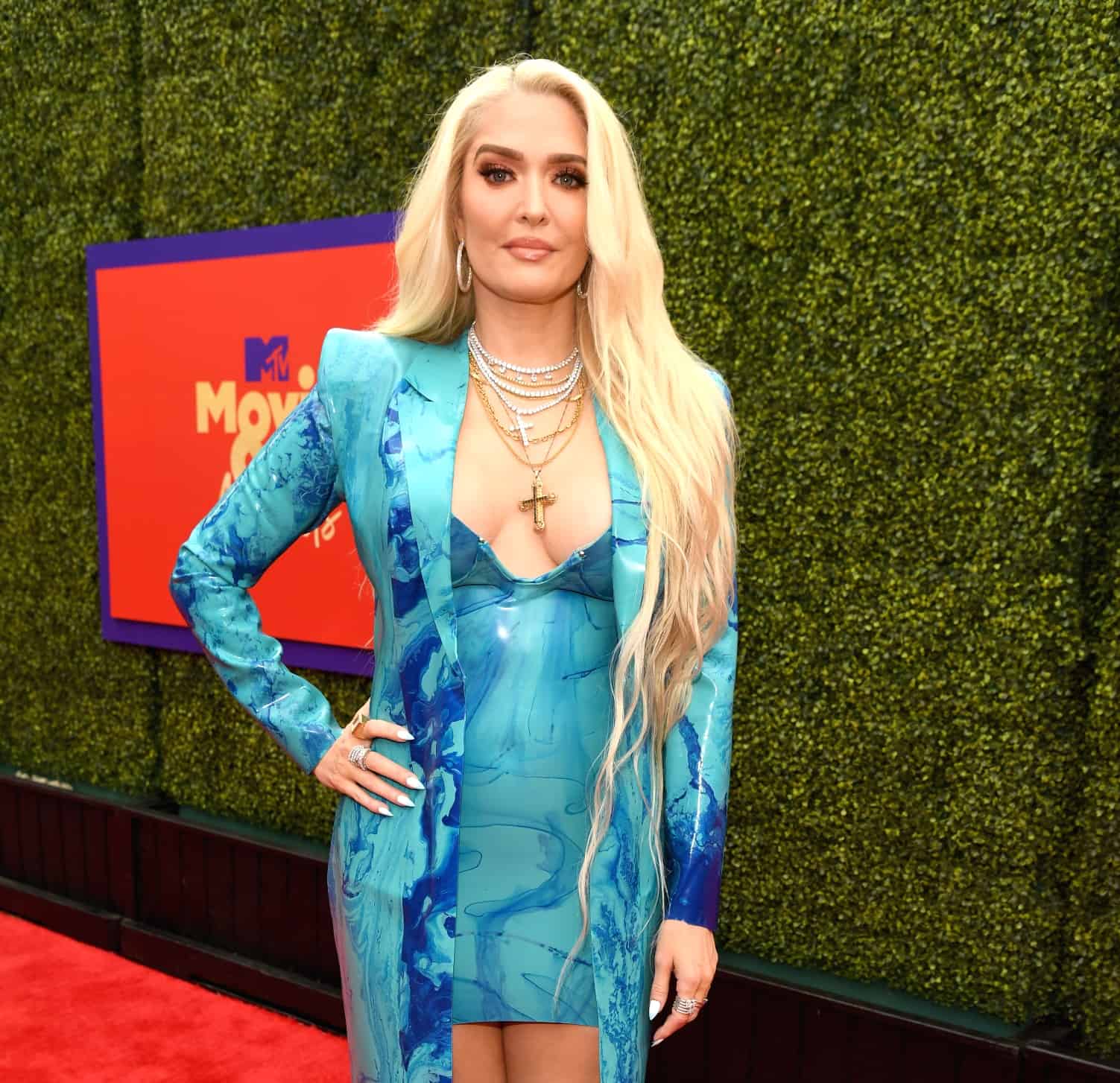 Erika Jayne is under fire after being caught flying private earlier this month.

After being dragged into the ongoing bankruptcy case against her estranged husband, Thomas Girardi, and his law firm, Girardi Keese, the attorney hired to investigate the Real Housewives of Beverly Hills cast member’s finances is wondering how she was able to afford the pricey ride.

On Saturday, amid the mounting lawsuits against the 50-year-old RHOBH star, attorney Ronald Richards shared a link to a Daily Mail article that included photos of Erika smiling as she prepared to board the jet on her way out of Los Angeles.

“Pursuant to California Rule 3.6(b)(5), we are requesting assistance in obtaining evidence and information necessary to determine the source of [Erika Jayne]’s legal fees and expenses, as well as the tail number for this plane in this published article,” he tweeted.

Pursuant to California Rule 3.6(b)(5), we are requesting assistance in obtaining evidence and information necessary to determine the source of @erikajayne's legal fees and expenses, as well as the tail number for this plane in this published article.https://t.co/9d8m1ByEWL

Hours after the post was shared, Erika seemingly offered a response to Ronald’s message about her private jet ride, claiming there was “no merit,” “no investigation,” and “no proof” before complaining about the “harassment” she was receiving.

In response, Ronald shared a couple of additional tweets, the first of which said he was getting “no real cooperation” and “no production of documents” from Erika “yet.”

It also said Erika was “not allowing witnesses to speak because she hired her own attorney to intervene” and had given “no disclosure as to the source of hundreds of thousand of dollars being spent” and “no acceptance of firm liabilities but objections as to firm assets.” 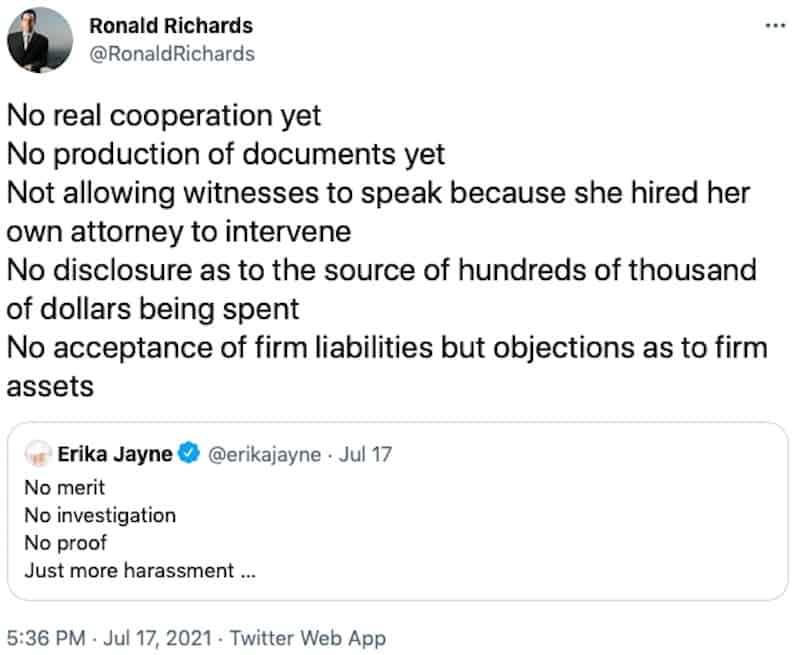 “Merit: There are large checks for jewelry purchases, she has expensive jewelry,” he wrote. “Investigation: The IRS / lenders were told for years by their firm, she has receivables owed, IE: Exh. No consent to view accounts to see how they were capitalized.”

“Evidence, not harassment,” the attorney added. 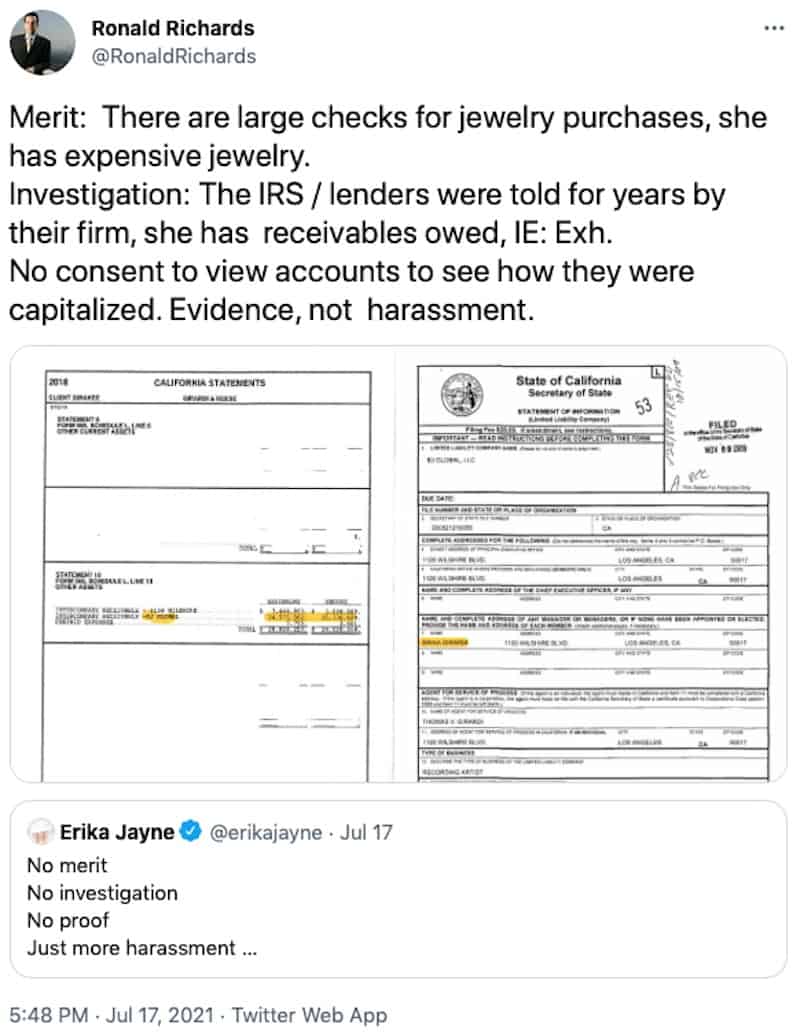 In other RHOBH news, Bravo Snark Side on Instagram revealed on July 18 that victims of Thomas and his law firm recently set up their own GoFundMe page in hopes of raising $10,000 to pay for “home repairs or new housing.” 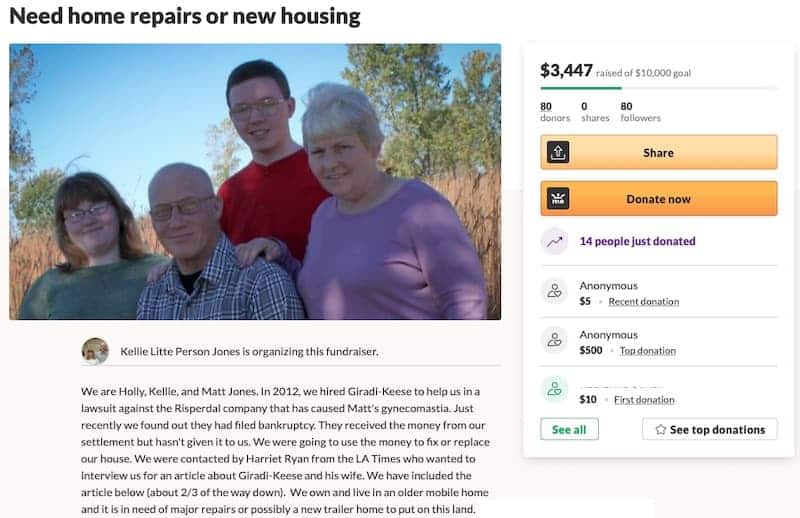 According to the family, they hired Thomas’ law firm in 2012 to help them sue the Risperdal company that caused Matt Jones‘ gynecomastia.

“Just recently we found out they had filed bankruptcy. They received the money from our settlement but hasn’t given it to us. We were going to use the money to fix or replace our house,” they shared with their request. “We own and live in an older mobile home and it is in need of major repairs or possibly a new trailer home to put on this land. The roof is leaking which is causing damage to the ceilings, the wood around the windows is rotting, the floors are starting to unlevel in some places, the floor is sinking in where the washer and dryer are in the hallway, the bathroom, and the back bedroom, the deck is rotting, and there are some problems with the plumbing.”

“We have been unable to afford nor do the work ourselves as we don’t have the knowledge or capability to,” they continued. “We are becoming desperate to find a way to either fix our house or replace it.”