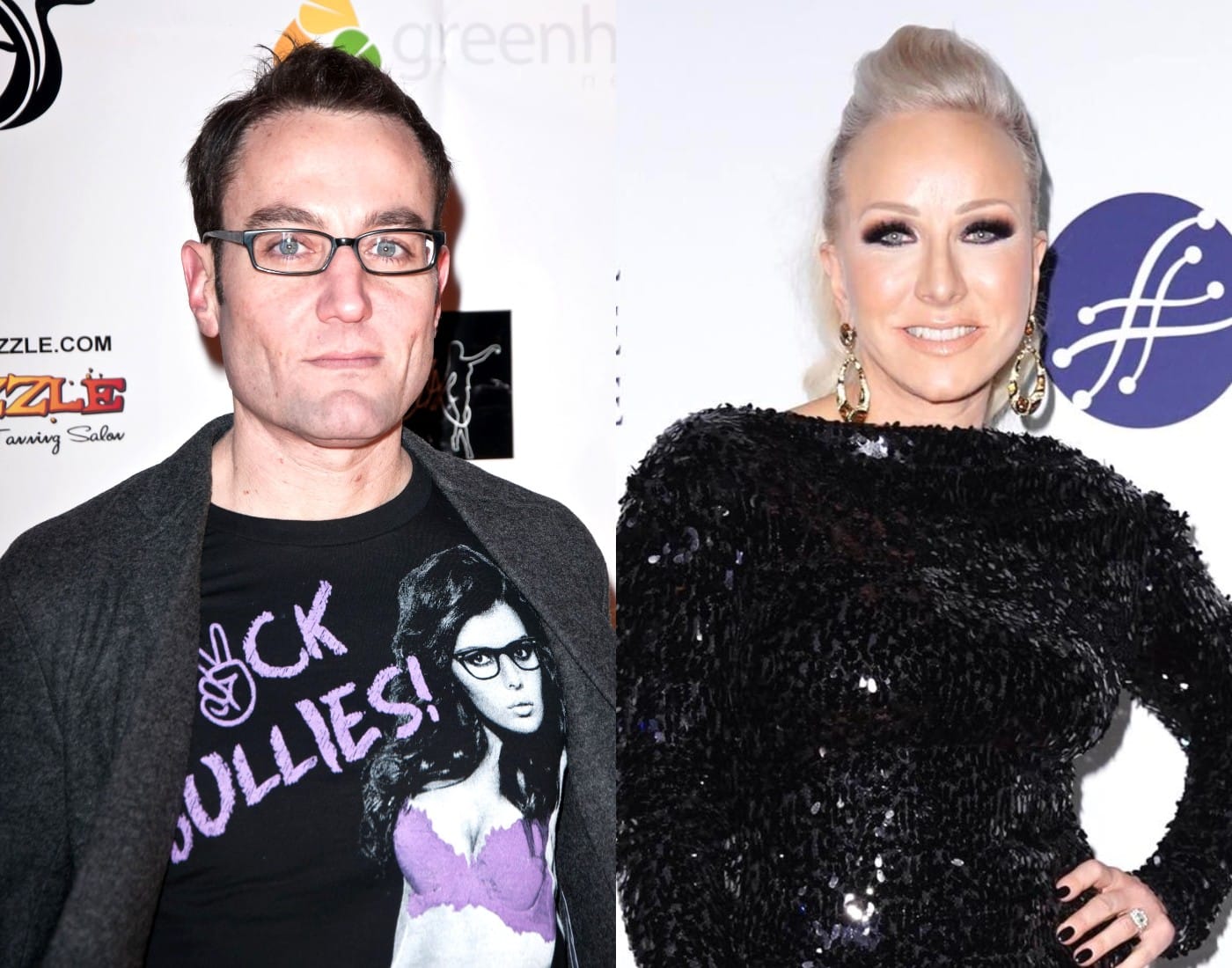 Margaret Josephs is speaking out about her connections to both Luis Ruelas‘ ex, Vanessa Reiser, and David Yontef, the host of the Behind the Velvet Rope podcast.

After being accused of leaking stories about Teresa Giudice‘s fiancé to bloggers amid the currently airing 12th season of The Real Housewives of New Jersey, Margaret responded to a post on Instagram that showcased Vanessa thanking her for a necklace and a post on Twitter that featured David, who has also been seen with Vanessa, at her mother Marge Sr.‘s birthday party.

“So Teresa was right.. Marge does know Louie’s ex and she is besties with a blogger (he was also seen at Marge Sr.’s Birthday),” The Bitchy Housewife declared on Instagram on April 14. “Louie’s ex is thirsty and unhinged, she even does RHONJ after shows with Dana and talks Bravo all the time!? No wonder Teresa did what she did.. She knew exactly what was going on behind her back.. Who is the sick and disgusting liar now?”

Following the post, Margaret offered a response, noting that she and David, who is not a blogger, are friends and clarifying that Vanessa had simply purchased a necklace from her company.

“Now that you have uncovered the Davinci code… Let me set it straight,” Margaret began in her response. “We are all friends with David and he’s a podcast host NOT a blogger. The last photo is from the season finale party at Dolores’s he was invited too when we all found out about the orchestrated hair pull by T, and he was invited to Marge Sr’s birthday amongst other events.”

“Louis’s ex did PURCHASE a warrior necklace from my company that we made for breast cancer, she tagged me. You are not a genius. She states in her video she bought it,” Margaret continued. “I would tag every news outlet and fan site that ran endless stories but it is too many to mention.” 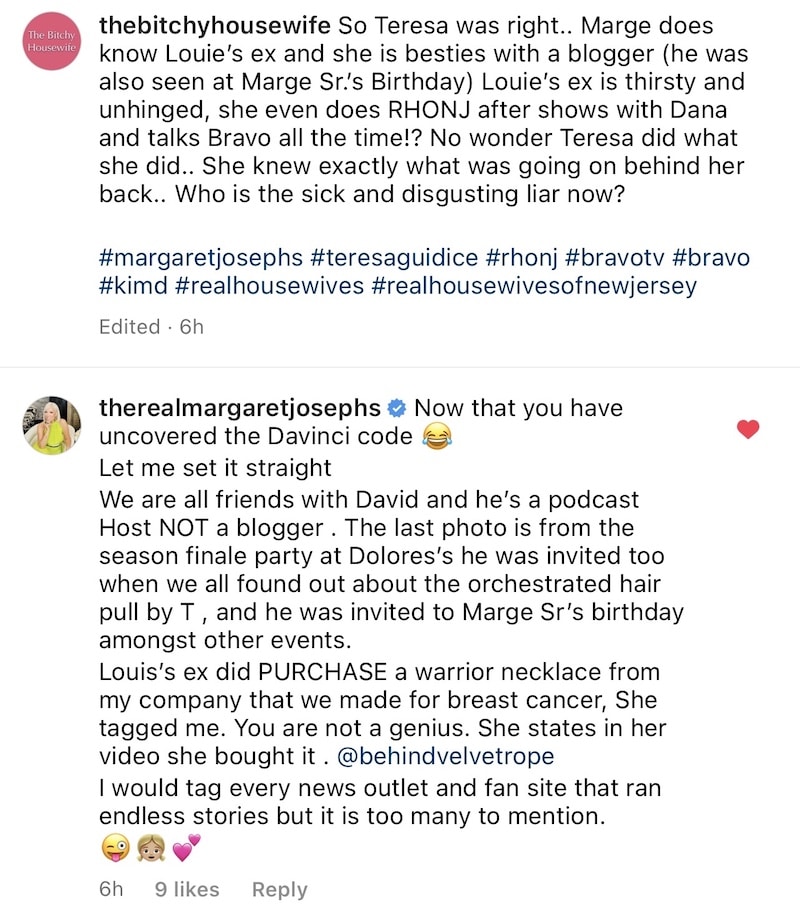 Days prior, a man on Twitter shared a couple of photos, one of which featured David on an episode of RHONJ and another that showed him with Luis’ ex, who said they were enjoying a “great night with friends.”

“How is Margaret gonna sit there and pretend she has no connection to Luis’s ex when this man was literally caught at Marge Sr’s birthday last episode… Like just own it girl,” he wrote. 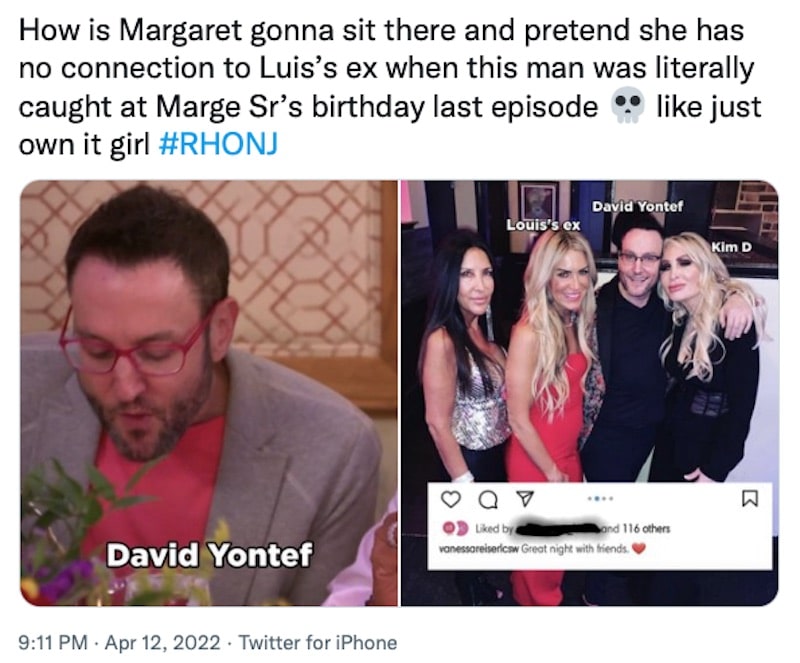 Amid the controversy, David is speaking out with a statement of his own, telling Reality Blurb that despite Teresa’s suspicions, he and Margaret have not teamed up against Luis, nor has Margaret leaked any information.

“It seems Teresa Giudice thinks I am a Blogger, or the Internet now does, in some mastermind scheme to take down Luis Ruelas in conjunction with Margaret Josephs. I am the host of a top rated Bravo Podcast, Behind The Velvet Rope, where I interview Bravolebrities and Housewives five days a week,” shared David. “Anything newsworthy said on my show is said by the guest of the day, not myself, which have included such greats as Lala Kent, Countess [Luann de Lesseps], Sutton Stracke, Craig Conover and many more.”

“As someone who works constantly, all of my friends are in the media industry,” he continued. “One of those friends happens to be Margaret Josephs who I have known for many, many, many years. Margaret is like family to me. Believe it or not, when Margaret and I hang out, we have much better things to do than talk about Teresa or Luis.” 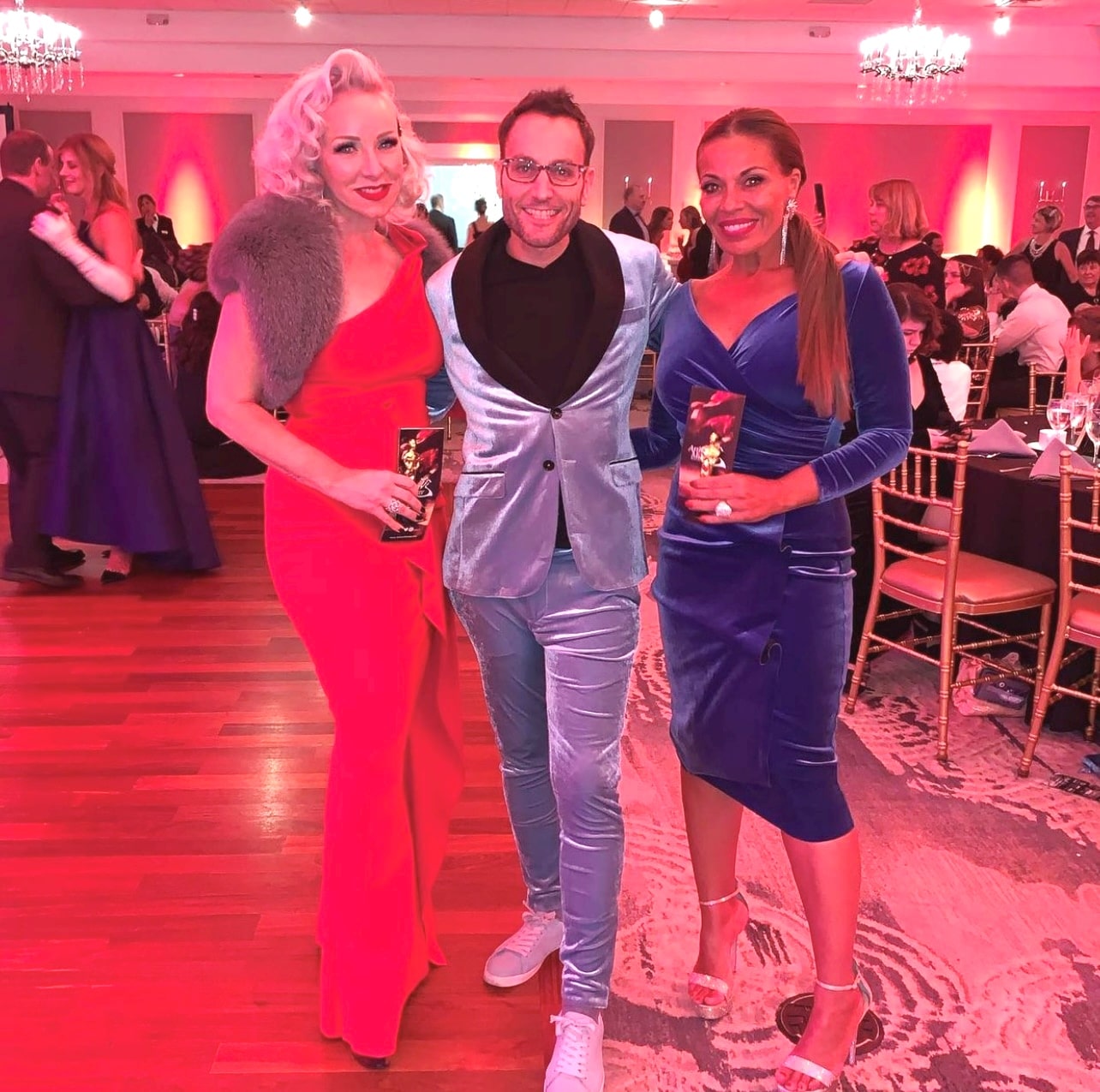 According to David, Margaret isn’t responsible for the negative press Luis has gotten in recent months as most of what’s been shared online is public record.

“Margaret has never leaked anything to me. To be honest, if something does not happen on air, Behind The Velvet Rope, I simply do not care. I am too busy interviewing actual Housewives daily to worry about who said what to whom regarding Luis and Tre. Also, Teresa’s argument is inherently flawed in that there are public court records of various lawsuits against her fiancé as well as a viral video,” he noted. “No one needs to say anything. Google is all someone would need. Regardless, neither my day job of running The Behind The Velvet Rope Podcast nor my several year friendship with Margaret Josephs will be ending anytime in this lifetime so any more chatter on the matter is just a waste of everyone’s time, none the least of which is mine.”