Home Real Housewives of Orange County News RHOC’s Emily Simpson on What She Can’t Stand About Reality TV, Claims of Being a “Troublemaker,” and Biggest “Misrepresentation” of Show

RHOC’s Emily Simpson on What She Can’t Stand About Reality TV, Claims of Being a “Troublemaker,” and Biggest “Misrepresentation” of Show 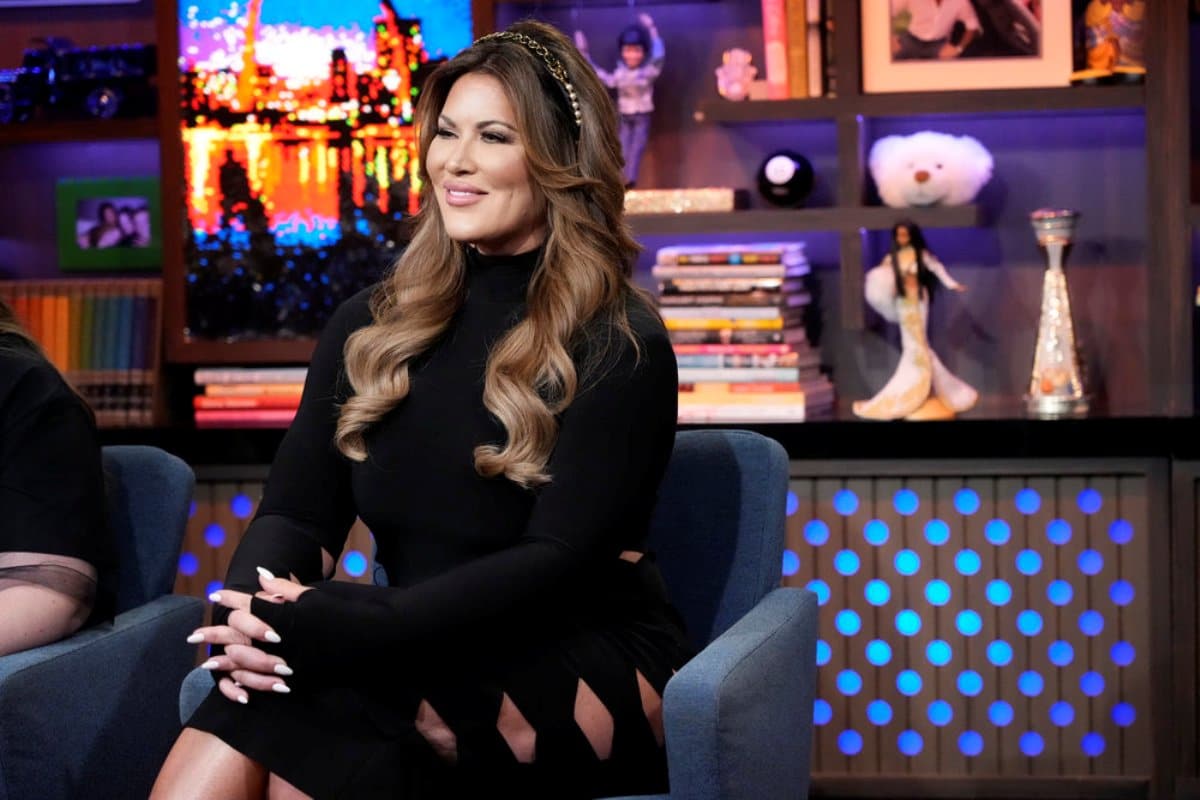 Emily Simpson hosted an “Ask Me a Question” session on her Instagram Story recently, and during the chat, she answered several questions pertaining to The Real Housewives of Orange County.

In addition to sharing what she “can’t stand” about reality television and clapping back at a fan who labeled her a “troublemaker” due to her antics on season 16, Emily revealed what she believes to be the biggest “misrepresentation” of the Bravo show and reacted to Tamra Judge‘s reported suggestion that she made a lot of effort to get casted on the show.

“What is the one thing you can’t stand about reality TV?” a fan asked Emily earlier this month.

“I think people on [social media] forget that I am an actual human… with feelings,” Emily replied. “I understand that people watch the show, and they have reactions, and thoughts and opinions… as they should. But some people take it to a ridiculously and vile low and that can be hard to deal with.” 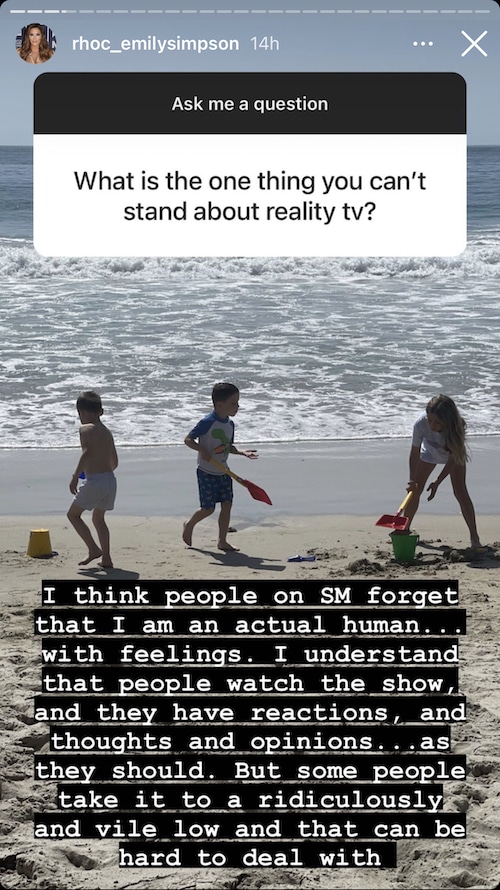 Another fan, in a comment, said, “Your just a troublemaker,” before suggesting that she stirs the pot with her castmates in an effort to remain relevant on RHOC.

“Trying to stay relevant cus u have no storyline whatsoever blah blah blah. U really think [Gina Kirschenheiter] us your friend? [Shannon Beador] is your true friend but your to busy stabbing her in the back u can’t see it. U just continue stirring the pot. In the meantime, Gina is besties with [Heather Dubrow]. Sorry Emily, but your gone with the wind,” the person had written. 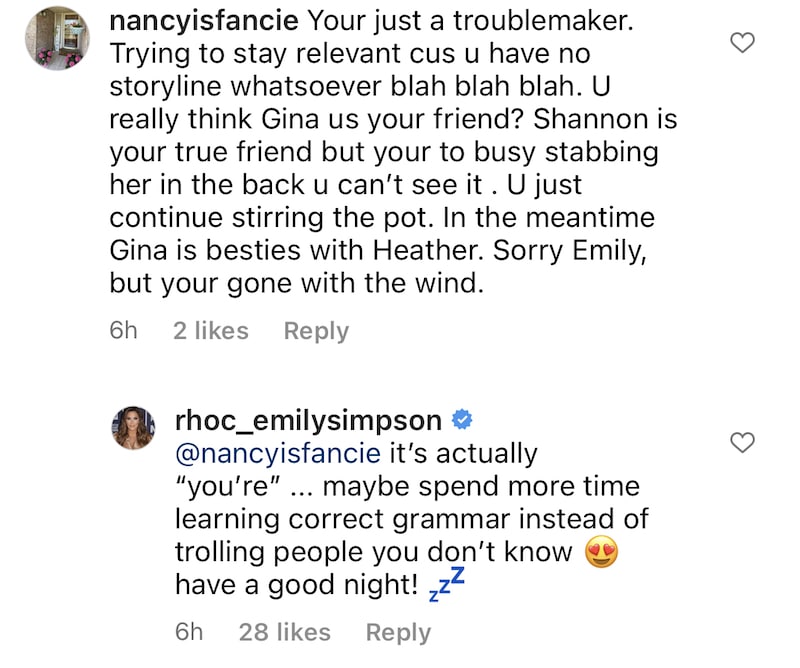 In another Story post, a fan asked Emily, “Do you ever feel that you are misrepresented/portrayed on [Housewives]?”

“Of course… but honestly I never complain,” Emily replied. “I think the biggest ‘misrepresentation’ is really just that the show has to be edited into a condensed 45 minute episode so a lot of things can’t be included.” 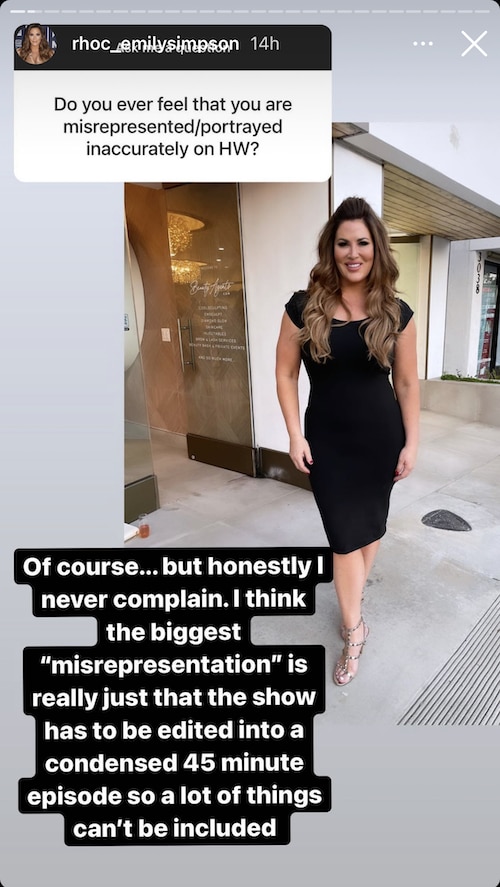 Another person wanted to know if Emily had tried “for years” to nab a role on RHOC.

“Is it true that you were trying for years to get on the show? Why does Tamra keep saying it?” they wondered.

“It’s not true,” Emily confirmed. “I auditioned one time prior to being cast for season 13 and I was contacted by a casting agent. I never reached out to anyone in production or casting and ‘tried’ to get on the show.” 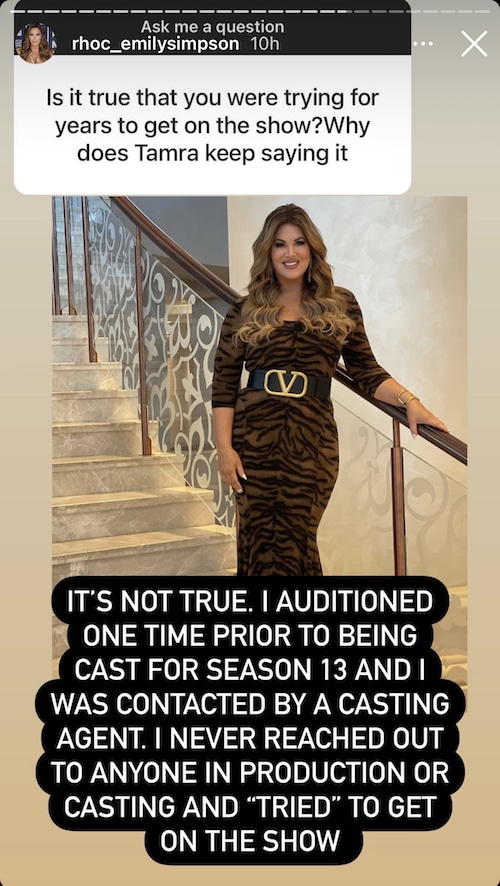