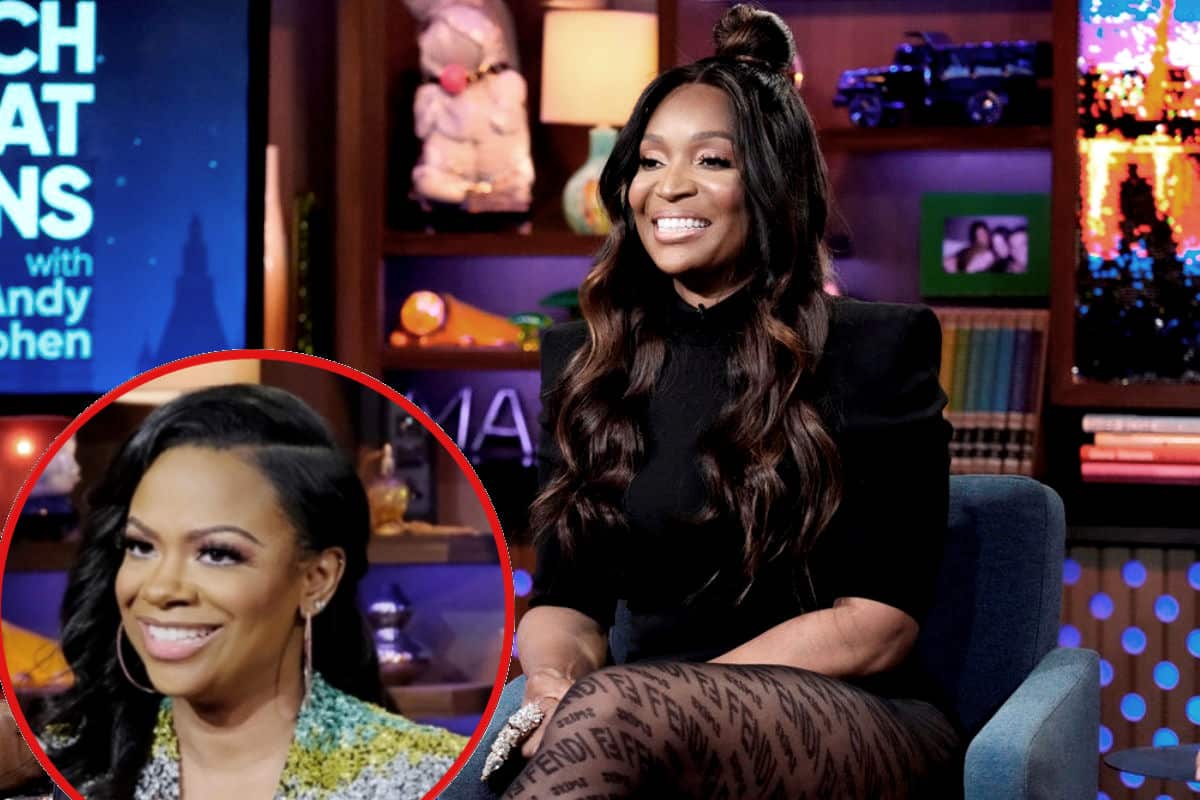 Andy Cohen confronted Marlo Hampton about her “below the belt” and “unprovoked” behavior against Kandi Burruss on Sunday’s Watch What Happens Live.

Following several episodes of The Real Housewives of Atlanta in which Marlo took aim at Kandi, suggesting she’s a “hoe,” shading her husband, Todd Tucker, and downplaying her career by claiming she’s not “worldwide,” Andy wanted to know what Marlo thought about people accusing her of attacking her castmates for “no reason.”

“I don’t know why they’re saying for no reason. I just feel like….” Marlo began on the August 14 episode of WWHL.

But Marlo had a reason, asking, “Do you remember a couple of weeks ago when Kandi was here, [and you asked] ‘Kandi, what would you give L’Archive from 1 to 10?’ I just knew she was getting ready to say.. She said 2.5.. That’s what started it… That’s what started our little tension, when she was negative about my business.”

“On Watch What Happens Live,” Marlo confirmed. “When you asked her the rating from L’Archive but anyways, to move on.”

“But I’m saying you were attacking her at the dinner table on the show,” Andy argued.

At that point, Marlo said it was Kandi’s comments about her nephews that set her off.

“I was talking to [Ralph Pittman Jr.] and Kandi hasn’t had nothing to say or contribute towards the boys in three years. Why while I’m talking to Ralph with his wife [Drew Sidora]… why would you interrupt…?” she asked. “I’m already going through a tough time with the boys. I don’t wanna talk about that right now.”

Although Marlo felt she had a right to go for Kandi in Jamaica, she admitted that she made a mistake in suggesting Kandi was only known locally, at least a little bit.

“Listen, Kandi is worldwide. But these circles that I’m in, when I’m [in] Tokyo, Japan, Australia, they don’t know Kandi,” she revealed. “Even in Jamaica, she didn’t get pull that we needed. I had to do that.”

As for Todd’s suggestion that Marlo bought her way onto RHOA, Marlo said, “That was a question I was going to ask Andy, how much did I pay to be in this group?”

“I was so confused… I think he was… just talking,” Marlo reasoned.

Earlier this summer, Marlo was targeted by a break-in. And, at the start of WWHL, Andy asked her about it.

“We just got back from Houston so William was sleeping on the couch downstairs, we had just heard a crazy noise, William screamed and I just knew it was fear and I looked at the camera and there were four guys [with] guns, everything. They raced out because I stood up there and I said some words that scared them,” Marlo recalled, confirming the thieves “didn’t take anything.”

At another moment of the show, Marlo was asked why she pressed Ralph on his decision against adopting Drew’s son, Josiah, while suggesting kids were off-limits in regard to her own parenting.

“The reason I pressed him is because the day before, Drew was so exited, telling me about how excited she was that she was adopting him and it just touched home,” Marlo explained, revealing, “I was in foster care, my fifth foster home, I thought the family was gonna adopt me, came home, the lady’s like, ‘You know what, my daughter feels like she’s not being loved so you’re gonna have to leave’ [after] probably a year. It was very heartbreaking.”

And when Andy mentioned the fact that many felt her decision to send her nephews to her sister’s house “didn’t track,” given her own experiences, Marlo said that the only thing that didn’t track was her incorrect explanation of the situation.

“I didn’t understand that because to me, it still tracks. What didn’t track is that I said I kicked them out. I should’ve re-worded that,” she noted. “I needed to press the reset button. The boys were not behaving.”

Another fan wanted to know if Sheree Whitfield‘s friendship with Kenya Moore bothered her.

“Absolutely not,” she replied. “I’m not jealous like that, just as long as she’s loyal to me, I don’t care who she’s friends with.”

Later, on the WWHL: After Show, Marlo was asked for her thoughts on Kenya’s date in Jamaica.

“Oh boy Kenya’s date, talking about the guy from Tinder? I thought she probably hired him from Tinder or something. No but I will say he was fine as hell though. He was fine. I would’ve knocked boots with him.”