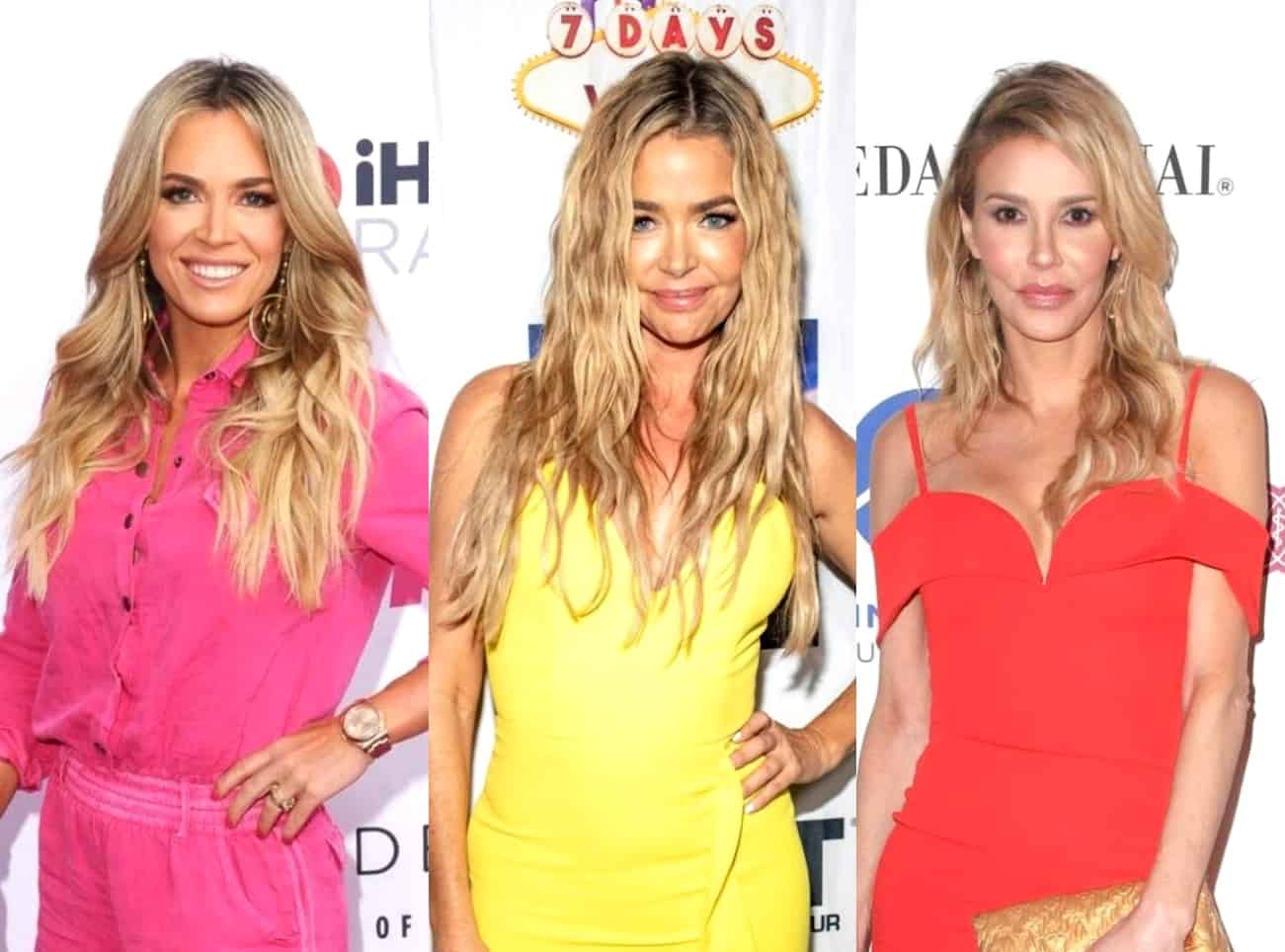 Teddi Mellencamp revealed her dream cast for Real Housewives of Beverly Hills season 13 during a Q&A session on her Instagram Story on Tuesday morning.

In addition to offering an update on the Fox Force Five amid Erika Jayne‘s feud with Dorit Kemsley and revealing what she’s been up to since being fired from RHOBH in September 2020, Teddi told fans she’d like to be brought back to the show for its upcoming season — along with Denise Richards and Brandi Glanville.

“If you had the power to shake up the RHOBH cast who would you choose?” a fan asked Teddi on October 25.

“My guess is we won’t see Diana again,” Teddi began in her response, giving a nod to the season 12 newbie, Diana Jenkins, who failed to make an in-person appearance at the reunion taping last month.

“I think they should bring back Brandi and me and hell even Denise if she will stop with her ‘Bravo, Bravo, f-cking Bravo‘ and actually show up to work,” Teddi continued. “I think after BravoCon a lot of relationships have shifted and adding to those shifts would be juicy. Plus I want to see some fun again.”

Season 13 would be especially juicy if Denise and Brandi were both to return as their alleged affair served as a main storyline amid the show’s 10th season years ago. 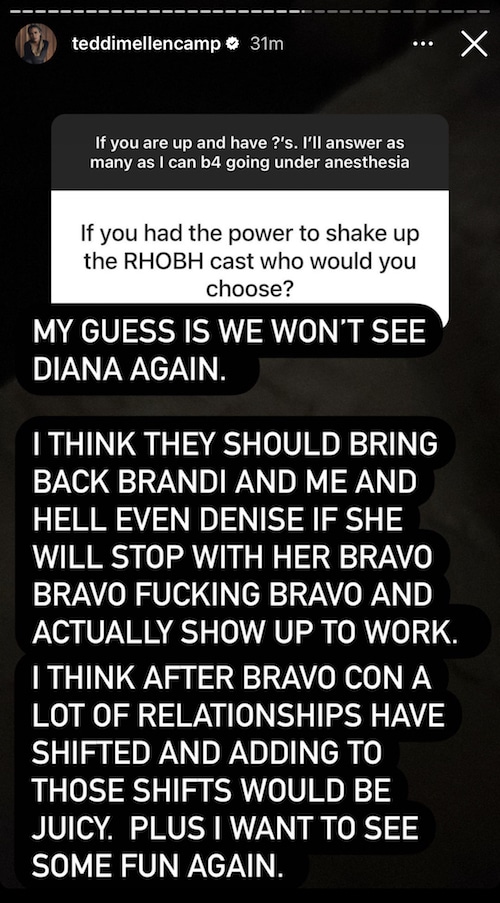 As for the Fox Force Five, which is made up of Teddi, Erika, Dorit, Lisa Rinna, and Kyle Richards, Teddi didn’t seem to have much hope for reconciliation between the women after season 12, especially given Erika’s recent comments about the potential demise of Dorit’s marriage to Paul “PK” Kemsley and Lisa’s claims regarding what Kathy Hilton said about Kyle amid her Aspen meltdown.

“Do you think the Fox Force Five will get over this bump after BravoCon? Reconcile?” one of her followers wondered.

“I think the name Fox Force Five is part of the problem at this point,” Teddi replied. “I do not know what the future holds but the group chat has been [silent] … Only individual texts.” 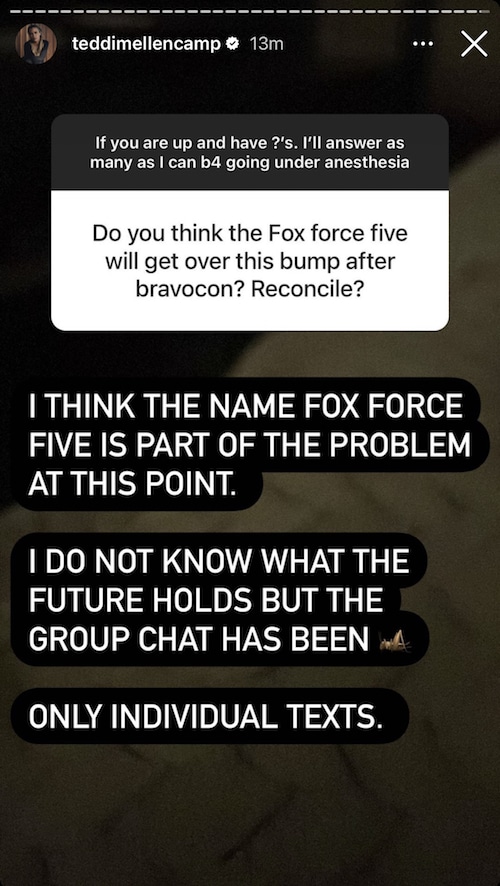 “I still run [Go All in by Teddi] and we have changed over 20k lives,” Teddi shared.

“I do [Two Ts in a Pod] [two] to [three] times a week. It’s a number one podcast,” Teddi continued. “I love to exercise and hang with friends moving my body … Oh yeah and I am a mother of [three] and a bonus mom of [one].”

Teddi also added, “And a wife to [Edwin Arroyave] which is like a [fifth] kid.” 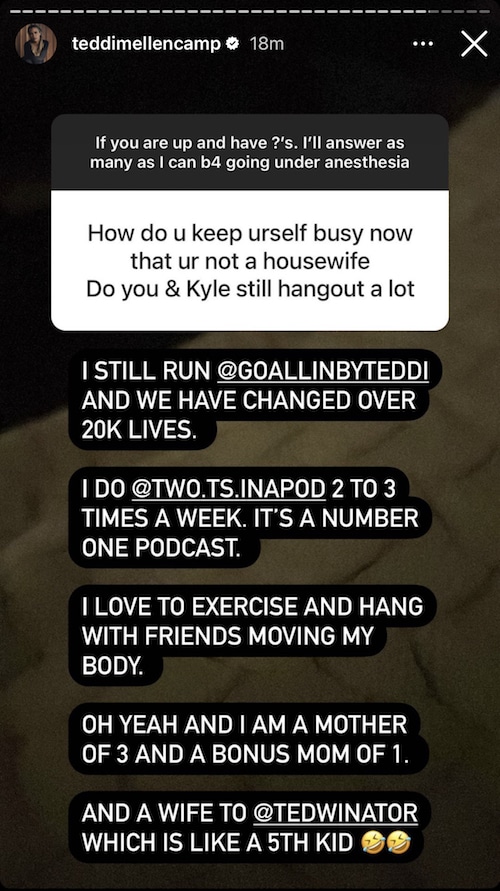