90 Day Fiancé Tell-All Part 2 Recap: Find Out Which Couples Are Getting a Divorce! 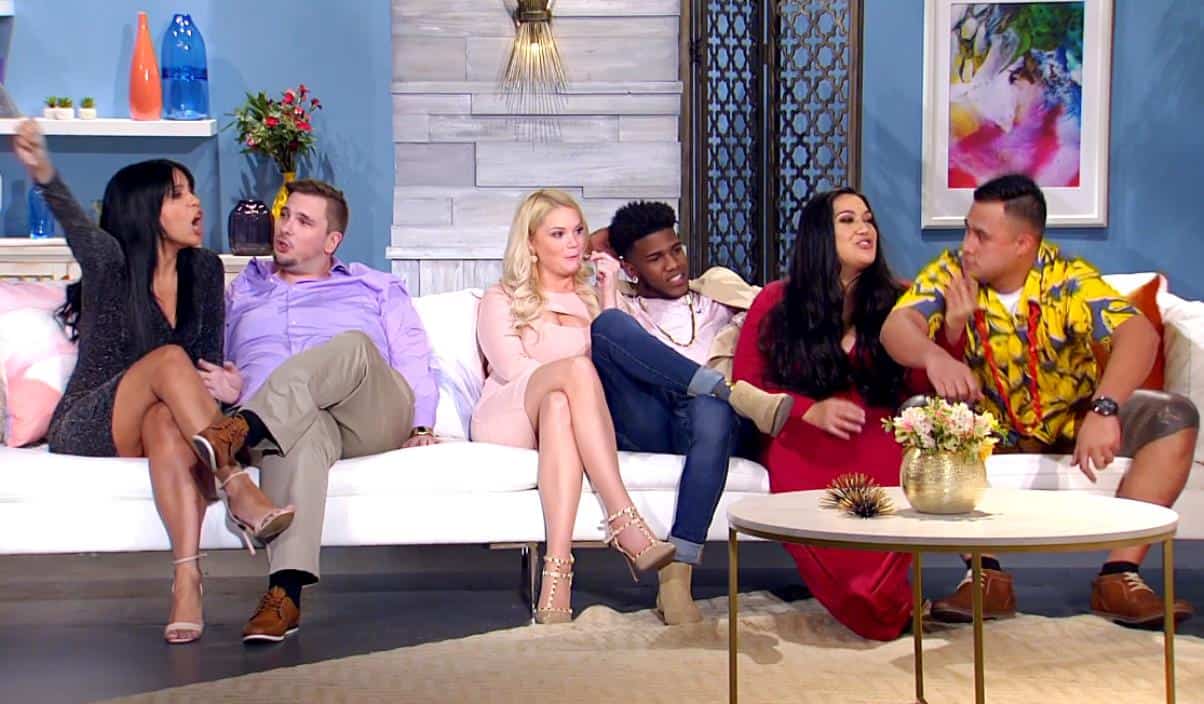 An explosive season finale of 90 Day Fiancé is here! Also below, at the bottom of the page, get the latest update on each of the couples as we reveal who is getting a divorce, who is separated, and which couples are still together.

Colt-E and Larissa finally make their way to the reunion and all hell breaks loose. A long-term battle between Fernanda and Larissa surfaces, and the majority of the cast storms off stage.

Larissa and Colt-E remain on the couch with the host, Shaun Robinson. Off set, Ashley calls Larissa trash, Fernanda fumes, and Asuelo looks like he is about to murder someone. “They come in late and they act like a**holes.” Gosh, I love Asuelo. The guy does and says everything everyone is thinking. Angry? Yell. Frustrated? Punch yourself in the head. I get it.

Shaun does her best to squelch the situation with Larissa, and Jonathan attempts to clarify the whole beef with Fernanda. Silly Shaun and Jonathan. When Larissa finally shuts up, Colt-E demands Jonathan to “be quiet please” and claims that Jonathan insulted him. Larissa shrieks, “He’s a f*cking software engineer.” OoOoO. At this point, a producer suggests a break, and everyone heads off set. Colt and Larissa continue to sit on the sofa and Shaun tries to reason with Larissa. Also, Colt just said “doofus.”

Everyone has had it with the antics of these trolls and they all decide that the couple is “trash” and “irrelevant.” Somehow, Ashley rallies her posse to go back out one more time and they unite to confront the most hated duo on the sofa. #ClassBeforeTrash. Luckily, Shaun has decided to move past the battle between Larissa and Fernanda and has chosen to focus on a lighter topic: Larissa’s arrests. Colt shares that he is afraid Larissa may be deported because of her arrests, but unfortunately, the couple remains mum because it’s “legal matters.” Pshhhht.

On a lighter note, Tasha, Eric’s estranged daughter/ex-roomie, joins the show via Skype. Tasha states that she has no relationship with her father and Eric says that he will not talk to her until she apologizes for the entire debacle. Tasha isn’t backing down and still has not worked out the issue with Leida either. Seems like they are at a stalemate here.

I love how Steven inserts himself into the whole Leida/Tasha fight. Leida and Tasha continue the tit-for-tat business even via Skype. In the words of Eric and Leida, “this is useless.” Eric becomes emotional watching the segment where he says sometimes not everybody comes out clean from the choices you make. He hopes to one day have things go back to normal and he tells Tasha that he loves her, but she “needs to learn these lessons…” whatever that means.

Rewatching some clips during Colt and Larissa’s segment brought back some good ol’ memories. The infamous BBQ between Larissa and Colt-E’s cousin John, the only person who straight up calls Larissa out for who she is. The good old days. This is a true testament to Larissa’s loony personality- the video captures it all. When asked if she regrets taking off her ring and throwing it, Larissa says she does and Colt shares how upset he felt when she did that. Debbie comes in via Skype to weigh in on the situation…well, Debbie and one of her 17 cats. Why does Debbie look so different on this reunion show? Did she, dare I say it, get work done? Or just actually brush her hair?? Debbie shares that she had “no intention of taking Larissa’s place.” Colt somehow always finds himself stuck in the middle of the constant fighting between Larissa and Debbie and explains how hard it is to be in this position. Insert eye roll here.

Debbie shares that she’s planning on moving out (#breakingnews) and Colt looks like he is going to burst into tears. Can we all agree there is far too much focus on Colt and Larissa? Enough of them already! Colt- compliment your psycho bride 42 times a day. Larissa- quit calling Debbie a b*tch. Colt- stop “flirting” with other women. Larissa- just stop talking. It’s easy.

Finally, moving on to Ashley and Jay and the third wheel, Natalie. Natalie is Ashley’s friend who claimed that Jay is a cheater. Naturally, Ashley chose not to believe Natalie but seems like Natalie has the last laugh here. Ashley calls Natalie something over and over again that keeps getting bleeped out and I can’t even decipher what word it is, but based on the casts’ faces, it must be pretty bad.

Shaun brings Ashley down a notch when she reminds her that Jay DID actually cheat. Ashley insists that she is glad Natalie is still not a part of her life because she is crazy. Riiiiiiight.

Taking a walk down memory lane, and watching the couples exchange their vows all over again is heartwarming for a brief moment, and then I remembered how messed up all of these “lovebirds” truly are. Ashley explains that it was a hard decision to elope and then all the couples weigh in on their big days. Larissa states that she is “grateful” that cousin John came to the wedding, even though he doesn’t like her and Eric replies that “it is what it is” when asked if he was upset his daughters did not attend the wedding. Shaun almost forgets Asuelo and Kalani, but makes up for it when she asks Asuelo to close out the tell-all. Colt can’t even keep up with the clapping beat as Asuelo stomps, screams, and “dances” around the set. It’s a beautiful sight.

Post-reunion, everyone goes their separate ways. Steven goes home, alone, cuz the idiot did not file Olga’s visa paperwork, and Ashley and Jay share an awkward cab ride back to the hotel. Jay attempts to ask Ashley for forgiveness, but Ashley’s frustrations may never die. It’s kind of a strange ending, following the cast around as they exit the building. 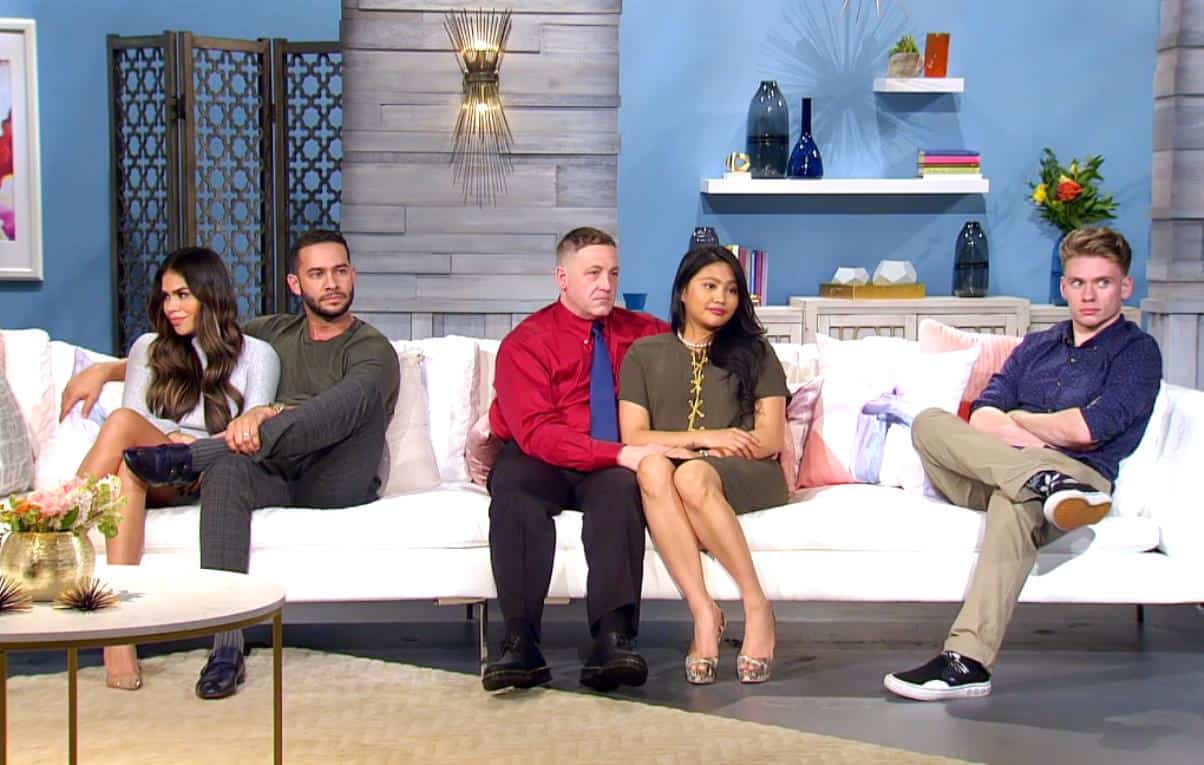 Jonathan and Fernanda both agree that the tell-all was tiring, and they rehash the whole Larissa situation again. For a girl who says she wants it to be “over,” Fernanda can’t stop talking about Larissa. She goes as far as saying Colt and Larissa are the reason for getting a K-1 Visa is hard. Ouch!

JONATHAN REVEALS HIS MARRIAGE TO FERNANDA IS OVER!

Colt claims it was a “miracle” that they were able to show up to the reunion and when they did, they got attacked by Jonathan and Fernanda. Colt suggests that in the future, they should try harder to be more reserved. HA!!! The couple discusses their concerns about Larissa’s potential deportation, but do their best to push it out of their minds. Speaking of pushing things out of their minds, Jay is doing his best to act normal around Ashley, even though he is walking on eggshells. Ashley explains to Jay that she doesn’t know if she wants to be with him anymore.

“Weeks later, the conversations are far from over.” The producers have decided to stir the pot further by showing unseen footage to the cast after they’ve returned home. WHY?? This is a recipe for disaster and is causing unnecessary drama. Colt clearly loves the attention since he watches the clips with a stupid wide grin on his face and he makes it clear “we aren’t bullies, we don’t start fights, but we will be damn sure to finish it.”

Speaking of fights, there are still some hard feelings simmering between Steven and Asuelo, and Eric versus the other castmates. Eric is still not over all of the accusations for “not defending” his daughter and he calls them all snowflakes. Ashley is also still not over Jay’s Tinder excuses and she’s “really unhappy” in her marriage. Then DO SOMETHING already. Jay confides in the producer and says that there is not much else he can do to save the marriage. Jay makes one thing clear- he isn’t here for the green card. That’s what they alllllll say…