The RHOBH Reunion Part 2 Recap: Kyle and Erika Address Lawsuits Against Husbands as Camille Believes the Reunion is a Set-Up 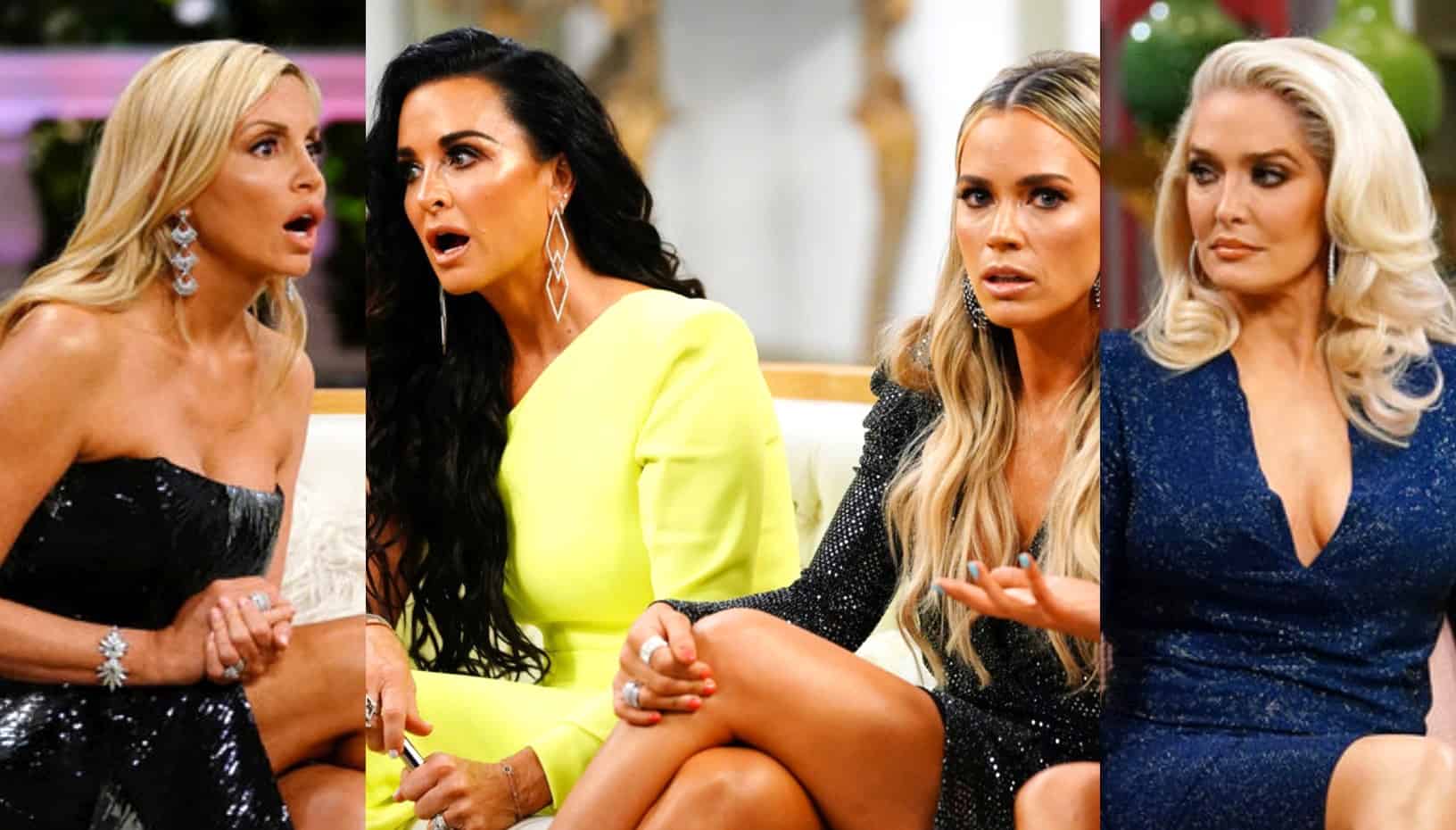 As if one part of the reunion with these ladies wasn’t enough, here we are…with part 2. More drama, more confusion, and you better believe more yelling on the Real Housewives of Beverly Hills reunion, part 2.

Host Andy Cohen stayed true to his word and addressed the lawsuits against some of the cast members. Andy confronts the women by asking if they all focused on the Puppy Gate “scandal” to simply divert attention away from their own personal issues this season. Touché!

Kyle and Erika become beyond defensive when the lawsuits get brought up, and Reality Blurb gets another shout out (WOO!) as Dorit’s “swimwear” business partnership gets questioned. The ladies call all of these claims “accusations” and try their very hardest to shut it down. See, girls? It’s not fun to have all the ugly parts of your life aired out for the public, is it?

According to Kyle, Mauricio “did not scam anyone” when it comes to a lawsuit over a $32 million home he sold. The seller is suing Mauricio over an accusation that Mauricio allegedly intentionally failed to inform the seller that there were better offers on the table. See, following the home sale, Mauricio ended up teaming up with the buyer to flip the home for a profit of $37 million, for the sale price of $69 million. Mauricio has denied any wrong-doing in the lawsuit, which is now scheduled to go to trial next year.

As for Erika, she also defended her husband Thomas, claiming that the loan company that sued Thomas for failing to pay a $15 million loan had apologized and the lawsuit had been settled. However, as we all now know, that loan company accused Thomas of defaulting on their settlement earlier this month, after he agreed to pay them back $16 million by July 7. Thomas allegedly paid back $10 million, but he failed to cough up the remaining $6 million by the agreed-upon date.

Before Andy got into the lawsuits, the show picks up with Dorit and Teddi having some #realtalk. We are still trying to decipher why and how exactly Teddi got wrapped up in this whole puppy tale. Even Andy Cohen is perplexed as to why Teddi never brought up the puppy gate issue with LVP. Teddi attempts to explain for the UMPTEENTH TIME that she wasn’t in the greatest place with Dorit at the time this all went down. But I’m still confused about why she lied about her role in it so adamantly for so long. Eventually, Dorit owns it and admits that she DID make a mistake by not returning Lucy back to Vanderpump Dogs. Still, Dorit made it clear that “Lucy was never in danger of being killed.”

Andy addresses Teddi’s behavior in the Bahamas, and she claims to “never lie.” LOL. Teddi deflects and says she has learned her lesson in “speaking in absolutes.” Naturally, Kyle jumps to Teddi’s defense and attempts to translate what the actual F Teddi is rambling on and on about. What’s questionable is why LVP didn’t fire John Blizzard, the guy who got involved in such a hot topic situation. The ladies claim that it’s only more proof that the whole thing was a planned set-up to drag Dorit down. Who has the time for this!?

Ah, the body issue segment. We are forced to re-watch the women discuss their issues with food and weight. Rinna, again, talks freely about her daughter, Amelia’s, past struggles with anorexia. Rinna shares that Amelia has gone through a lot with her anorexia. Kyle nods knowingly, because don’t forget, she was anorexic once, too! Kyle jumps in and says that she tried to shelter her daughters from her issues. Then, the ladies begin to share their personal trials and tribulations with their own bods.

Erika shares that she’s at her heaviest in her entire life. Camille lets Andy know that she has since become more comfortable with her body post-cancer. When the issue of work getting done gets brought up, Rinna smirks and shouts out that there is nothing wrong with it, so deal with it. Obviously, the convo jumps to LVP and how SHE never shares her Botox secrets because everything ALWAYS leads back to the REAL queen.

The two besties of the season: Teddi and Kyle. Essentially, Kyle’s newest puppet, the one who follows Kyle around like a puppy and basically does whatever Kyle says. Teddi is #TeamKyle and, in the words of Dorit, she’s Kyle’s “henchwoman.” Tyle, as I like to call them, have become “immersed in each other’s lives.” Camille explains that Teddi appears to be “up Kyle’s a*s.” She basically insinuates that as soon as LVP got out of the picture, Teddi snuck right into that friendship spot. Teddi simply cannot help herself and continuously interrupts Camille. It’s quite painful. Dorit even admits that although the closeness is nice, it gets a bit exhausting. Kyle very clearly needs to have a partner, and Teddi perfectly fits that mold.

Farrahween and Rinna’s Erika Jayne costume are the next hot topic. Rinna and Erika both laugh it off (still), and yet Kyle has an issue with it (still). Tyle (because one brain, duh) remain upset about it and Rinna shouts at Teddi, “You weren’t a part of it. You weren’t even there.” You tell her, Rinna. Like, sit down Teddi and quit trying so damn hard to be one of them. Andy wants to know why Teddi and Kyle feel as if Erika doesn’t want to be around them. Remember that whole drunken debacle in Provence? Erika reminds everyone that she likes to be around this group of women. Man, how pathetic are these ladies that they need constant affirmation that they are appreciated and liked? Paranoid much?

WHY IS CAMILLE STILL ON THE COUCH?! She shares that she feels like LVP is not in attendance because she is “p*ssed about Brandi.” What?! Camille 1,000% believes that Denise having Brandi’s back was what put LVP right over the edge. Denise seems perplexed, as she should be, and the attack truly begins.

Camille’s two faces of the season are highlighted. Camille kisses LVP’s booty some days, and other days she says things about LVP like, “I had such an issue with the gums.” I mean, LVP has said in response to Camille, “she should focus more on what comes out of her mouth and not about what’s in mine.” Ain’t that the truth…something that Camille doesn’t know much about, as she is a two-faced troll who talks out of both sides of her mouth. No one can quite understand how Camille can agree with the ladies one day, but then run to LVP and say something else the next.

When called out for her behavior, Camille shrieks, “You girls have all talked about each other behind each other’s backs.” Which is not untrue…but Kyle becomes so heated about this that her veins start popping out of her neck and she might go all Incredible Hulk on Camille. Now everyone’s yelling and the sheer chaos of it all is quite exhausting. I love how in her anger Camille calls Dorit, Erika. LOL. That’s how important these girls are to Camille. Camille further states that she doesn’t feel like Dorit is sincere. Dorit says that’s perfectly fine BUT then do not invite her to important life events, such as her wedding or a 50th birthday party.

To that, Camille retorts, “I didn’t want to invite any of you ladies to my wedding. It was for production!” OUCH. You can actually see the hurt in Kyle’s eyes as she remembers how special she felt being a bridesmaid at Camille’s wedding. Andy jumps in and makes it clear that she has “power over herself,” just to be sure that everyone remembers that Bravo isn’t tying anyone down and forcing them into things just for the show. Ha. Camille screams that the other women, the “witches,” are just plain nasty. At this point, I need a graphic organizer to get back to the heart of the issue here: Camille’s fear of saying something bad about LVP and then losing her “friendship” with her.

Camille has made it clear over the course of the season that LVP has not been a friend to her. Still, Camille continues to stick up for LVP. Camille apparently doesn’t like any of these women…and that includes Denise. HUH?! All of a sudden, Camille begins attacking Denise. Denise is so legit confused that she tells Camille, “Honest to God, you need to go take a second because this is not good.” Camille instantly believes that this WHOLE reunion is a set-up and she proceeds to storm off the set in an angry rage. No one can understand the big dramatic exit, and to be honest, I can’t either. Good thing there’s one more part to this riveting reunion to hopefully clarify many of the unanswered questions…

TELL US – WHAT ARE YOUR THOUGHTS ON THE RHOBH REUNION?