Home Real Housewives of Beverly Hills News RHOBH’s Camille Grammer Slams ‘Sociopath’ Lisa Rinna for Not Always ‘Owning it,’ Calls Her “Hypocrite” and Mentions Her Insensitive Pill-Topped Cupcake Tweet to Lisa Vanderpump, Reveals if She is Currently in Contact With LVP

RHOBH’s Camille Grammer Slams ‘Sociopath’ Lisa Rinna for Not Always ‘Owning it,’ Calls Her “Hypocrite” and Mentions Her Insensitive Pill-Topped Cupcake Tweet to Lisa Vanderpump, Reveals if She is Currently in Contact With LVP 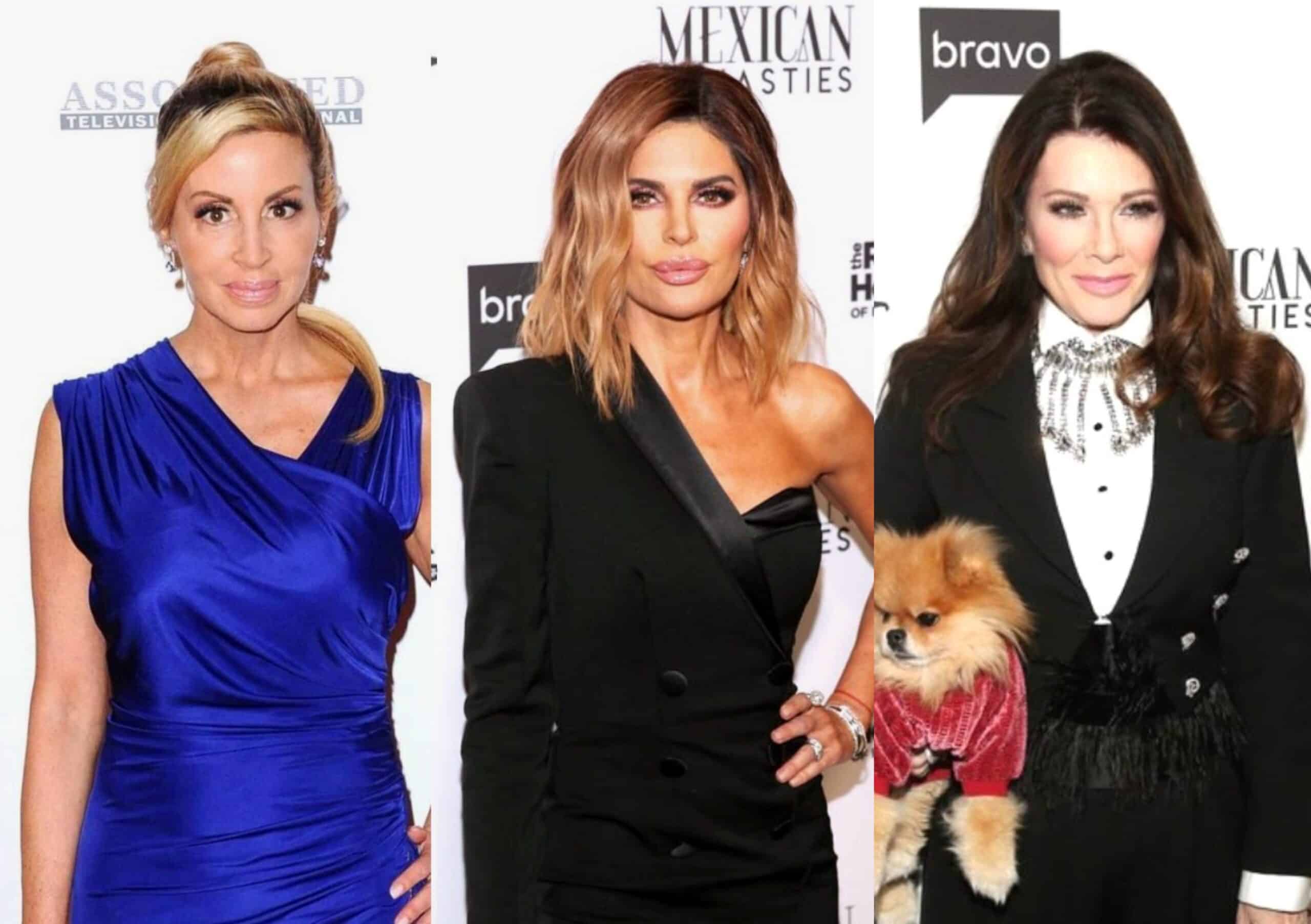 After being called out for her mean tweets by several of her castmates on the latest episode of The Real Housewives of Beverly Hills, Camille returned to social media to blast Lisa Rinna for her treatment of both Denise Richards and Lisa Vanderpump before revealing if she is still in touch with the latter.

“Did Sociopath Rinna [tell] [Camille Grammer] to own her behavior and her tweets??” a fan asked after watching Wednesday night’s show.

“Agreed,” Camille replied. “How about her outing Denise for not showing up at [Dorit Kemsley‘s] event on Twitter not to mention her insensitive Pill topped cupcake pic for [Lisa Vanderpump]’s Happy BDay tweet. Hypocrite.” 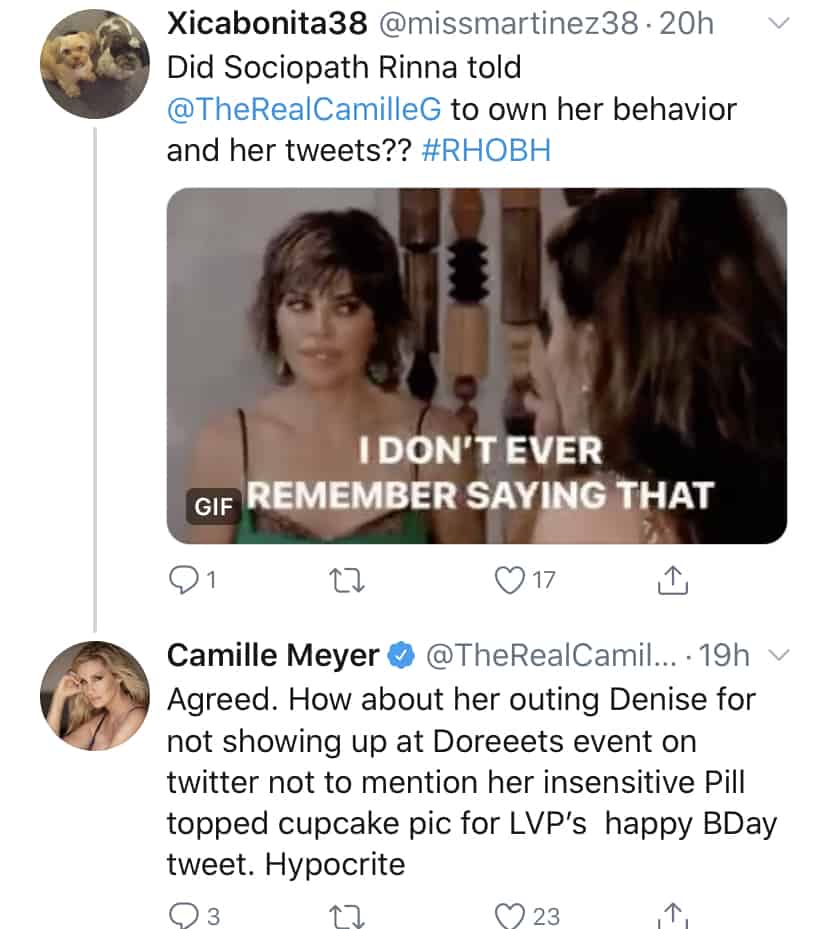 As RHOBH fans will recall, Rinna called out Denise in December after she failed to attend the season 10 finale, which was held at the home Dorit shares with husband Paul “PK” Kemsley and also served as the launch event for L’Astuce, a non-alcoholic line of champagne.

Rinna also took what appeared to be a very insensitive dig at Vanderpump when she posted a pill-topped cupcake in honor of her birthday following the tragic passing of Vanderpump’s brother, Mark Vanderpump, who died of an apparent suicide in 2018.

In a second tweet, Camille responded to a fan who slammed the RHOBH cast as bullies and asked if she and Vanderpump were still in touch.

“All of them are mean girls. They are bullies because of what they did to LVP last season. My heart breaks for Lisa because she didn’t deserve to be bullied while she was grieving her brother,” the fan shared. “Where does your friendship status stand with LVP? Are you guys talking?”

“Yes, we are talking,” Camille confirmed. 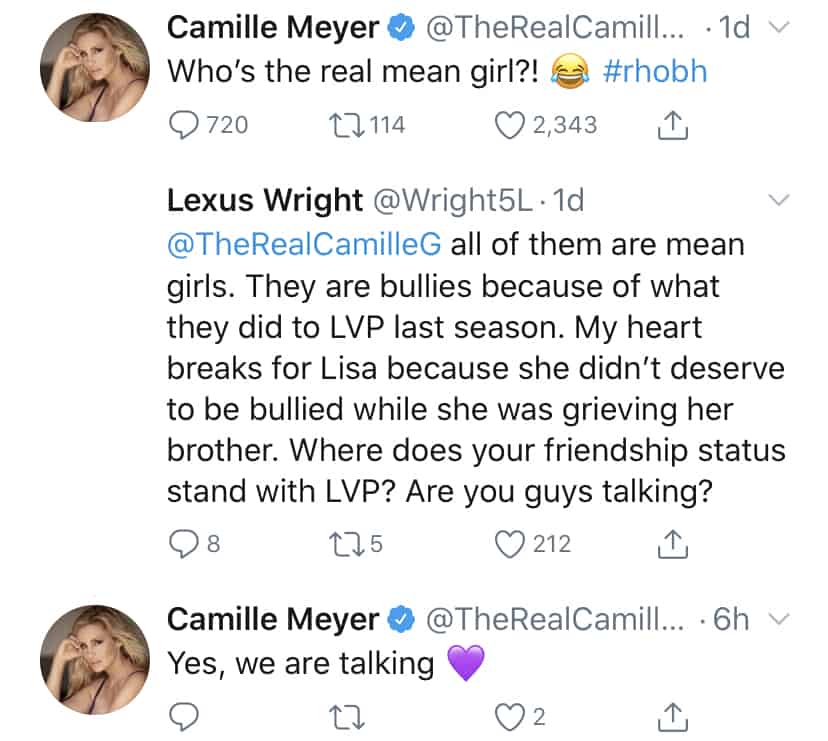