Home Vanderpump Rules Kristen Doute Confirms Vanderpump Cast is Not Allowed to Create Their Own Exit Statements, Teases What She Really Wanted to Say After Being Fired

Kristen Doute Confirms Vanderpump Cast is Not Allowed to Create Their Own Exit Statements, Teases What She Really Wanted to Say After Being Fired 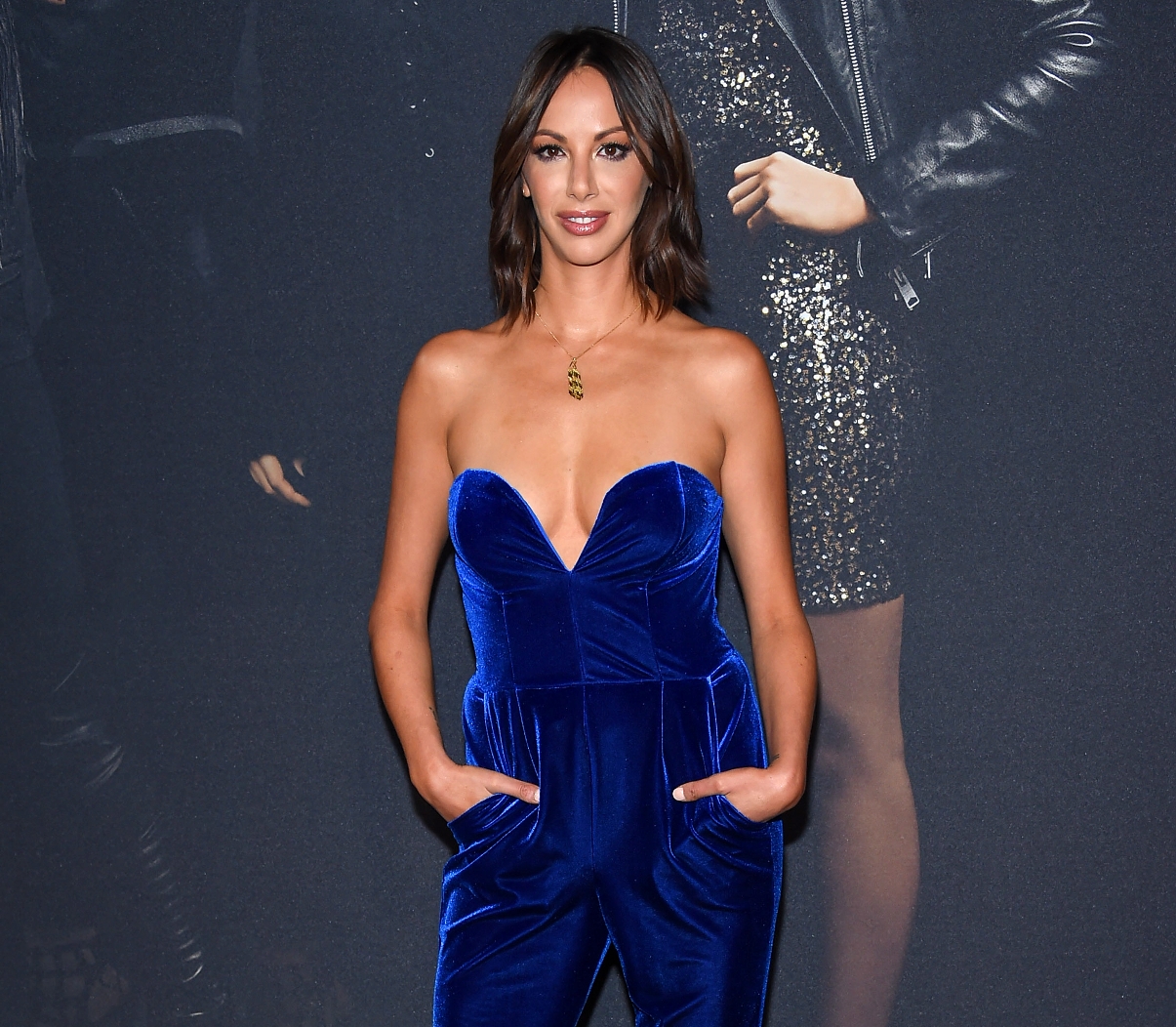 After her former co-star, Brittany Cartwright, suggested to a fan that she and Jax Taylor shared similar exit statements because they were not allowed to write their own messages, Kristen told her fans and followers to “open [their] eyes” before explaining how exit announcements are truly created and teasing her actual statement.

“Y’all, I just have to say something because it’s driving me nuts. I’ve been reading a lot of trolly comments online regarding either someone being let go from Bravo or perhaps walking away from something and that the exit speech is not always in our control and people just think that’s like so ironic and such bullsh*t,” Kristen began on December 14, months after being kicked off the show amid allegations of racist behavior. 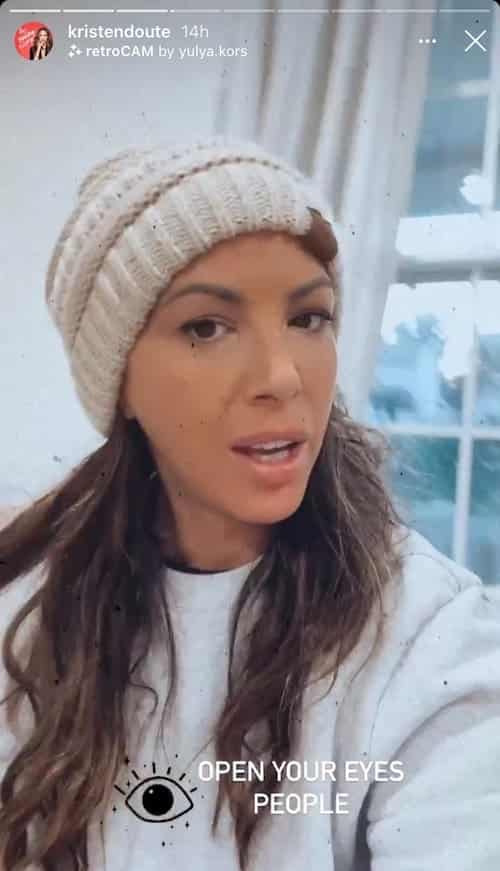 “I’m here to tell you it’s not. It’s not bullsh*t and we don’t get control over things like that,” Kristen explained.

As Pump Rules fans will recall, Kristen and Stassi Schroeder were fired from the show in June, along with Max Boyens and Brett Caprioni, after Faith Stowers accused them of racist behavior after her affair with Jax. 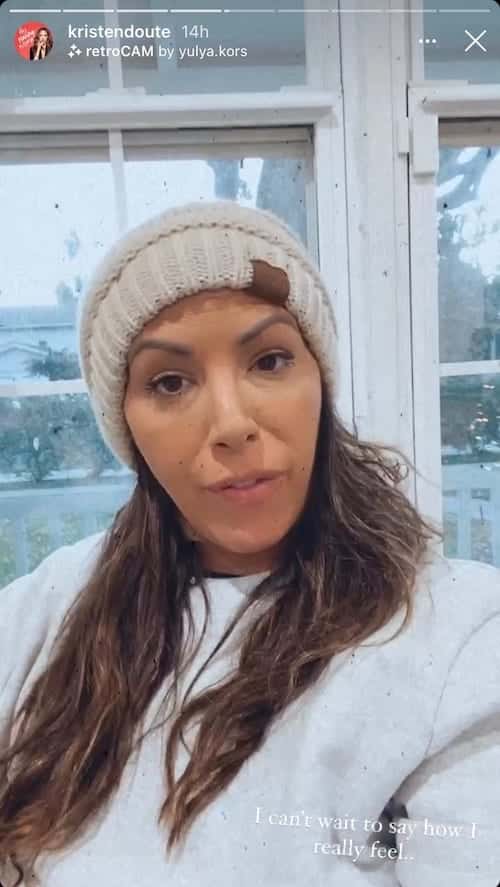 Continuing on, Kristen revealed that when it comes to the exit statements of herself and her castmates, they don’t have much say in what gets published. In fact, it is the “higher-ups” at Bravo who “mold” the messages that are ultimately shared on their talents’ social media pages.

“There are higher-ups that get to mold the way that speech goes. So you heard it here first,” Kristen stated.

Kristen then said that when it came to her June departure from Pump Rules, her true statement to her online audience was far more heartfelt than the message she ultimately shared.

“What I actually wrote is in here… but was much more heartfelt, very long, honest, and written from my soul. What I was told to post was edited, chopped down, then finally approved and not allowed to be released [three] days later,” she noted, adding that Bravo let her go after the statement was shared and revealing that her truth “is coming.” 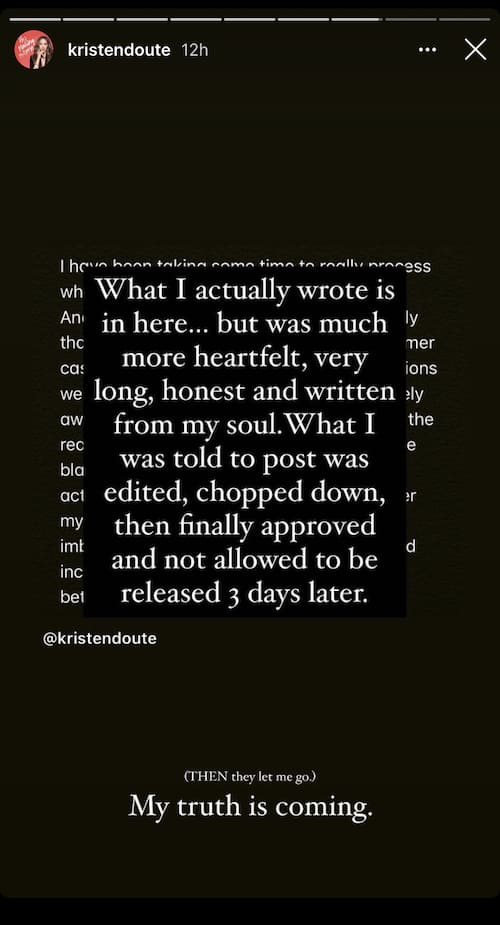 Following Faith’s allegations against her, Kristen offered an apology statement on Instagram that read, “I’ve been taking some time to really process what I’ve been seeing, feeling and learning. And I need to address something specifically that happened a few years ago with my former castmate, Faith Stowers.”

“Although, my actions were not racially driven, I am now completely aware of how my privilege blinded me from the reality of law enforcement’s treatment of the black community, and how dangerous my actions could have been to her,” Kristen continued. “It was never my intention to add to the injustice and imbalance. I’m ashamed, embarrassed, and incredibly sorry. I will do better. I have to do better.”

A ninth season of Vanderpump Rules has not yet been confirmed.