Home Real Housewives of Beverly Hills News RHOBH’s Kyle Richards Gives Nod to Feud With Lisa Vanderpump by Sharing an End of the Year “Goodbye” Post, See How Fans Are Reacting After She Pokes Fun at Ken Todd for Kicking Her Out of Their Home

RHOBH’s Kyle Richards Gives Nod to Feud With Lisa Vanderpump by Sharing an End of the Year “Goodbye” Post, See How Fans Are Reacting After She Pokes Fun at Ken Todd for Kicking Her Out of Their Home 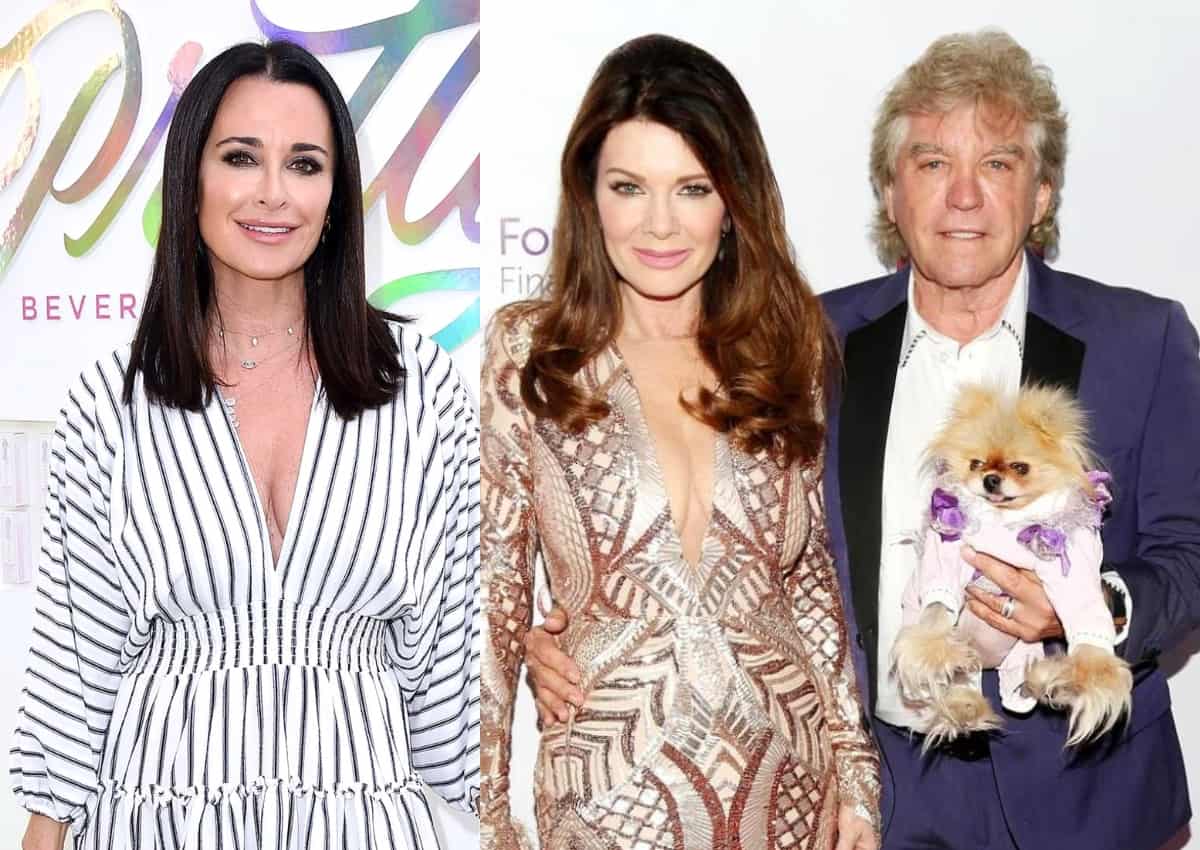 Kyle Richards is done with 2020 and ready to move forward with 2021. However, she isn’t doing so without creating some drama on social media.

On Instagram, as she prepared to ring in the New Year, the Real Housewives of Beverly Hills cast member shared a throwback photo of herself getting thrown out of Lisa Vanderpump‘s home by Vanderpump’s husband, Ken Todd, during the ninth season of the show.

“Don’t let the door hit you on the way out,” Kyle wrote in the caption of her December 31 photo, which featured a message reading, “Goodbye 2020.” 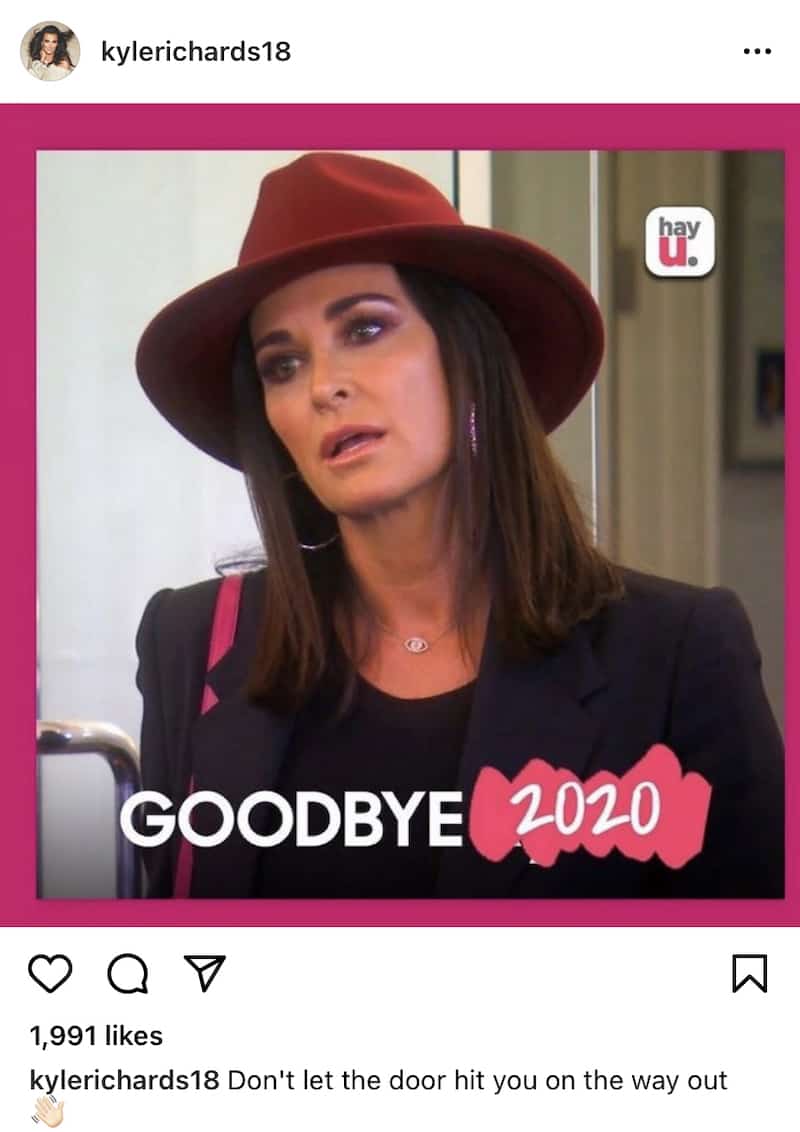 After sharing the post, Kyle received a comment from her friend and co-star, Lisa Rinna, who was also featured in the Puppy Gate drama of RHOBH that ultimately ended Kyle’s friendship with Vanderpump.

As fans will recall, Ken kicked Kyle out of Villa Rosa after she suggested Vanderpump was lying about having leaked a negative story claiming Dorit Kemsley abandoned a dog she adopted from Vanderpump Dogs to Radar Online, which Vanderpump denied.

With a series of laughing while crying emoji, Rinna made it clear that she was amused by Kyle’s post.

Kyle was also met with a number of other comments from her fans and followers who mimicked Ken for telling her, “Goodbye Kyle!,” as he demanded she leave their home.

“Show yourself out darling,” another said.

A third commented that they were saying goodbye to 2020 just as Ken said to Kyle two years ago.

“I read this in Ken’s voice lmaooo,” someone else shared. 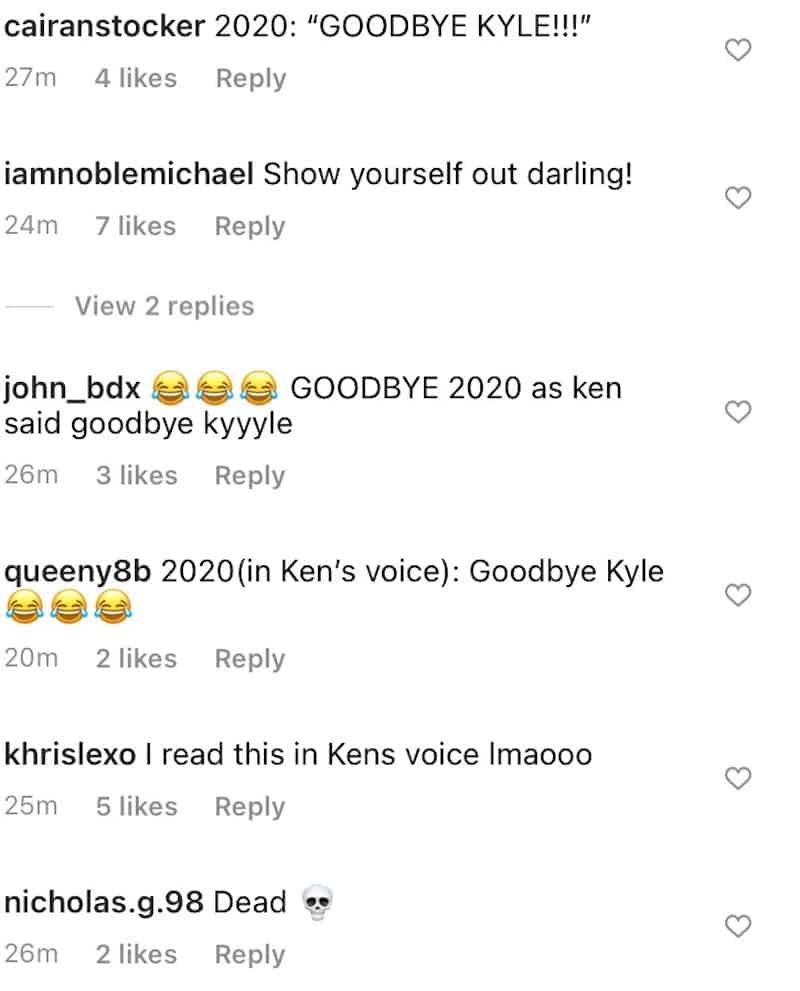 Following the episode in question, the “Goodbye Kyle” challenge made its rounds on social media, but Vanderpump spoke out against those participating, telling one fan on Twitter that she thought of it as a way of “bullying” her husband.

It was also said at the time that Vanderpump found it “insulting” that the ladies of the cast were getting in on the challenge.

“Lisa is embarrassed that she yelled at Kyle. However, she is so protective of her husband and hates to see other people make such fun of him,” an insider told Hollywood Life. “Lisa loves Ken with all her heart and they are both very protective of one another. Lisa knows Ken was just stepping in to defend his wife and he’d do it again in a heartbeat if he felt he needed to.”

The Real Housewives of Beverly Hills season 11 is currently in the midst of production and expected to premiere on Bravo sometime in 2021.