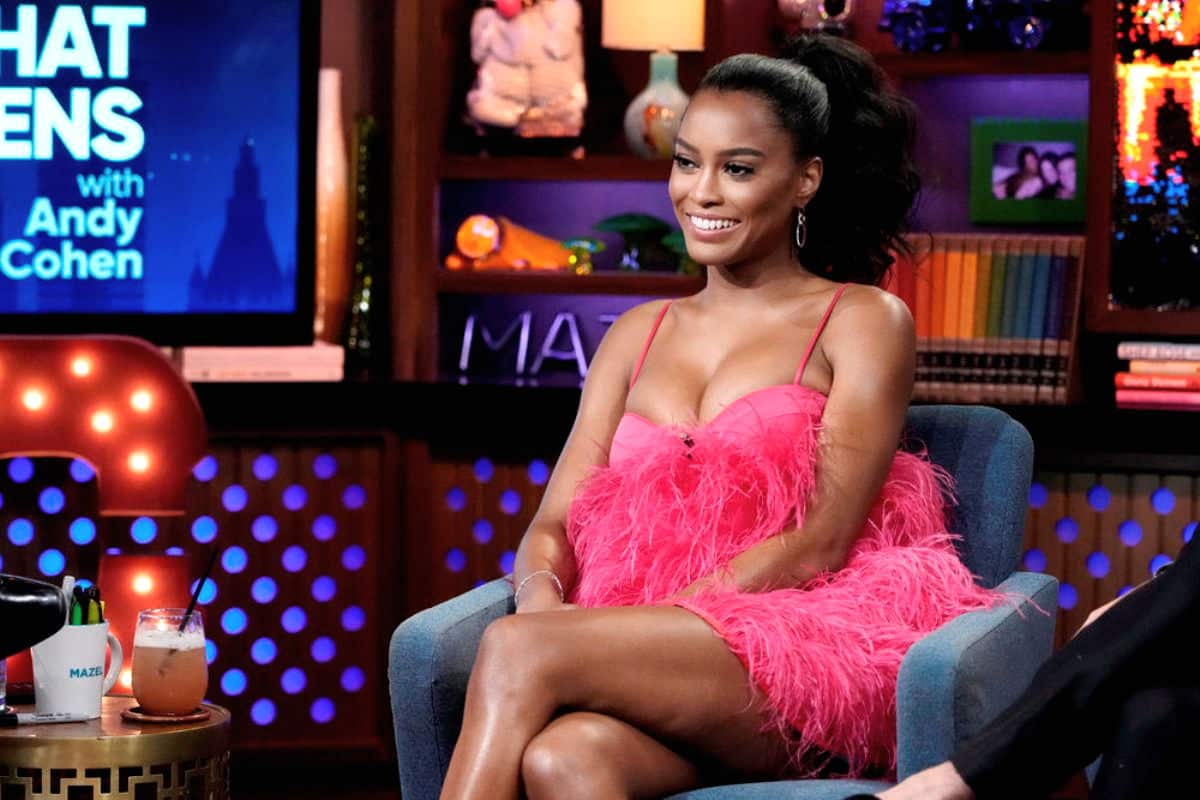 Ciara Miller appeared on Monday night’s Watch What Happens Live after she was seen in a dramatic, wine-throwing fight with Danielle Olivera on Summer House.

After things got heated between Ciara and Danielle as Danielle sided with Lindsay Hubbard amid her love triangle drama with Ciara and Austen Kroll of Southern Charm, Ciara admitted that her emotions got the best of her as she took full responsibility and accountability for her actions.

“I definitely take full responsibility and accountability for throwing that wine glass. I let my emotions get the best of me and that was not a great representation of me and I am apologetic,” Ciara shared on the April 4 episode of WWHL, also stating that she wasn’t happy when she first saw the super tease for the currently airing season.

“It wasn’t something I was pumped for at all. [I have] a lot of regret,” she explained.

According to Ciara, she didn’t realize how much of a mess she was making as she yelled back and forth with Danielle.

“It was definitely like a blackout type of… It was not great. It was bad,” she confessed.

Although Ciara ultimately offered an apology to Danielle, she said that it would have felt more genuine had the two of them had more time with one another.

“I think if we had more time it would have definitely been more deep-diving,” she noted.

Looking back at their encounter, Ciara explained to a fan that she felt Danielle had disrespected her on a number of different levels.

“There are a few things that happened off camera where I just feel they were very dismissive with me, in terms of leaving my name off things, like Lindsay and Danielle,” she shared.

And, while they have since had a chance to talk about these issues, Ciara said they’re “still a little indifferent.”

Another fan wanted to know if Ciara felt she was being hypocritical in claiming Lindsay doesn’t care about anyone else when it was she who ruined Andrea Denver‘s dinner as he faced a flood of emotions missing his loved ones back home.

“Can I just tell you that I listened to Andrea cry for weeks, and after we wrapped filming?” Ciara asked. “I supported him through the entire thing. Did I ruin the dinner? Absolutely, and I apologized.”

Ciara also didn’t apologize but said that was due to her needing to “remove [herself from] the situation.”

Regarding Austen’s recent visit to the Summer House residence, Ciara admitted that she thought it would be her and Austen kissing — not him and Lindsay.

“I don’t think I had any expectations specific, just like we going to have fun. If he was going to be kissing someone it would probably be me,” she shared, adding that she did feel that he told her about his kiss with Lindsay to make her jealous.

In addition to feeling that Austen was trying to make her jealous, Ciara said she felt Lindsay was “98 percent” trying to get back at her and “two percent” in birthday mode.

“I think there was definitely some intent there,” she stated.

As for where they stand today, Ciara, who confirmed she’s dating a “few people,” said that she doesn’t have much to say to her co-star.

“I told him we can say, ‘Hi and bye,’ and that’s the start and end of our conversation,” she declared.

Later, on the WWHL: After Show, Ciara looked back at Austen’s own appearance on the late-night talk show, saying that she wasn’t sure why Austen kept picking her over Lindsay (even saying Ciara was a “better kisser”) during a game if it was Lindsay he was interested in at the time.

“I wish I knew… [But] I really didn’t think it was that alarming. It was a game,” she noted.