REPORT: RHONJ’s Teresa Giudice and Dina Manzo Have a Falling Out Over Luis Ruelas and Dave Cantin, Is Dina Skipping Wedding? Plus Kim D. Reacts 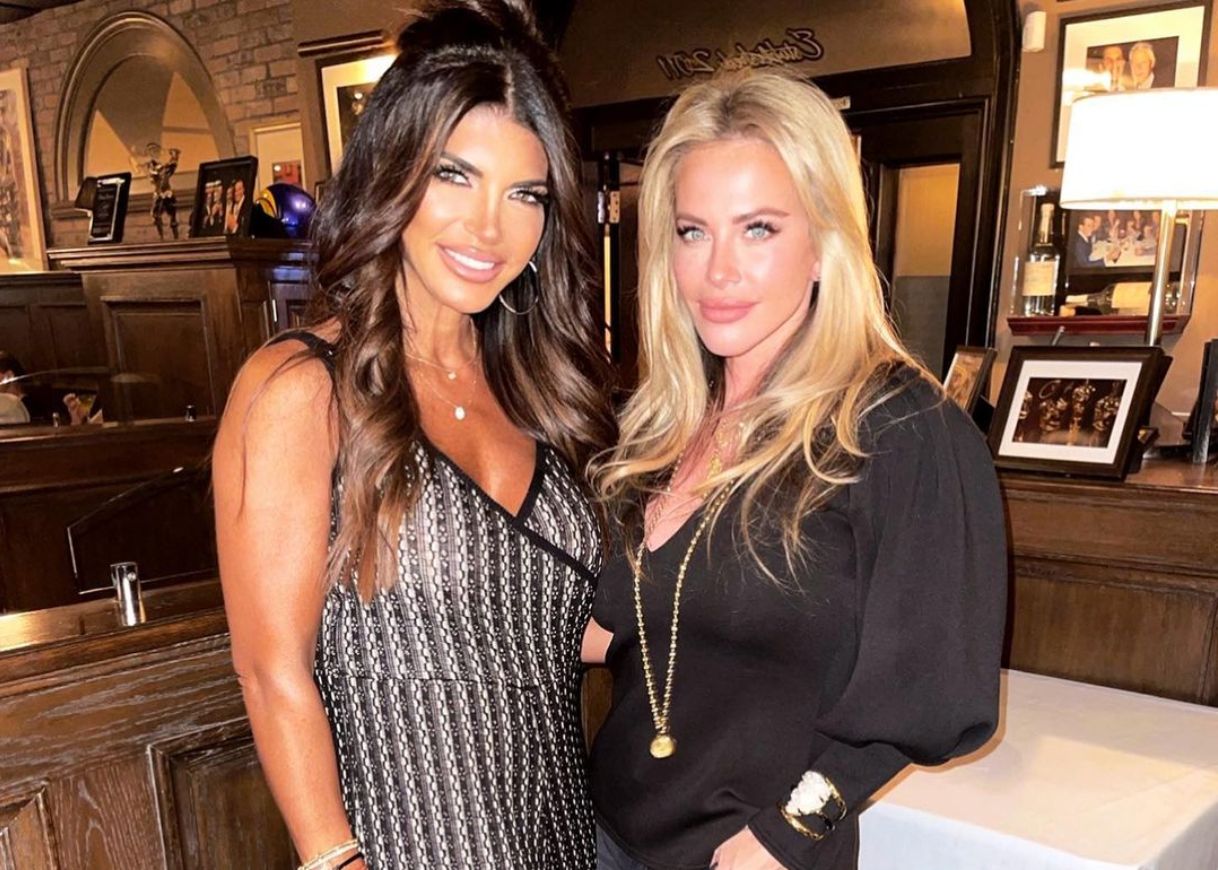 Teresa Giudice and Dina Manzo are reportedly “on the outs.”

With less than a month to go before the Real Housewives of New Jersey cast member walks down the aisle with fiancé Luis Ruelas, she and Dina, who was supposed to be acting as one of her bridesmaids at the August 6 event, are believed to be estranged, reportedly due to a feud involving Luis and Dina’s husband, Dave Cantin.

“As first reported by [Deux Moi] and then [Bravo and Cocktails], I can also confirm that Teresa and Dina have recently had a falling out over Louie and Dave,” the Best of Bravo shared on Instagram on July 7. “Also, Dina was supposed to be a bridesmaid in Teresa’s upcoming wedding, but as of now, she is not even planning on attending.”

“Hopefully this changes and they can work everything out,” they added. 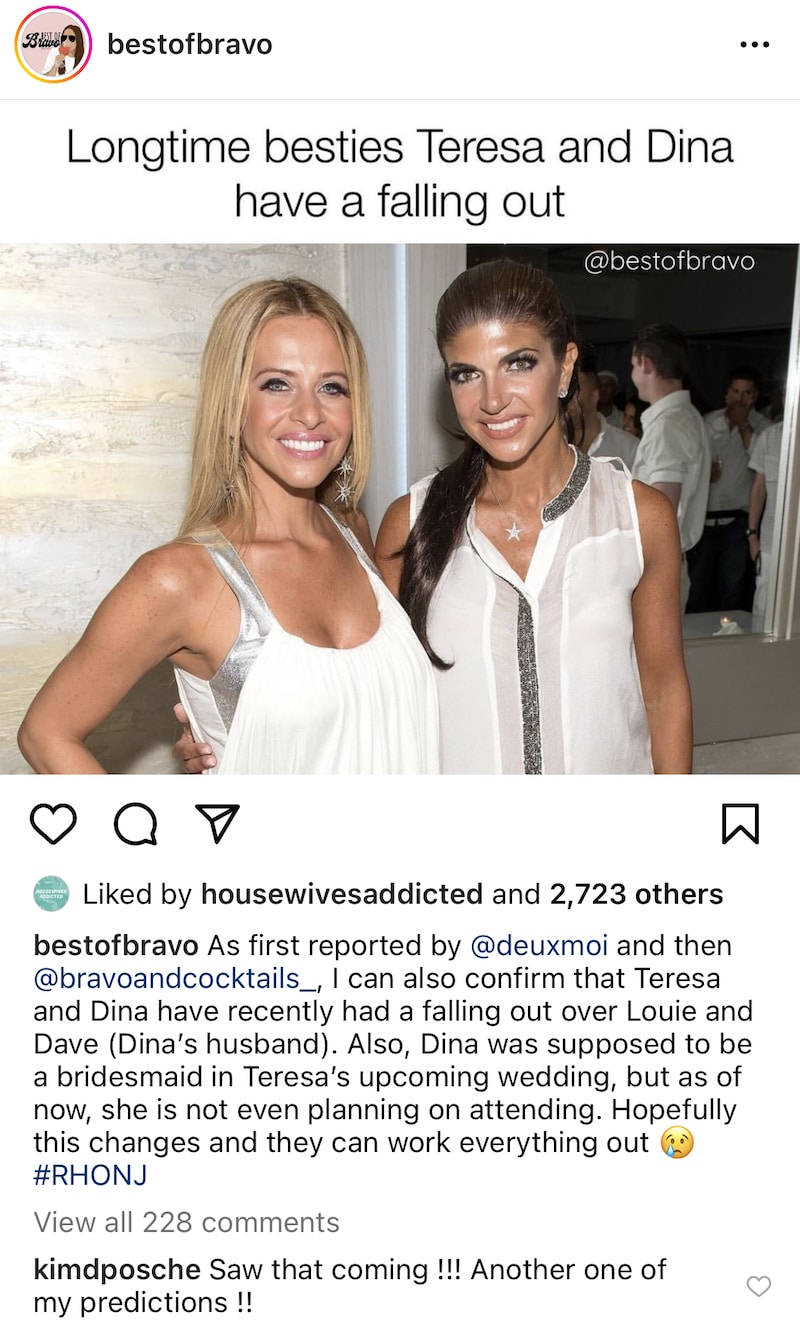 And in the comments section of the Bravo fan page’s post, former RHONJ regular Kim DePaola weighed in, making it clear that she was not surprised by the ladies’ alleged falling out.

“Saw that coming!!” she wrote. “Another one of my predictions.”

Prior to Best of Bravo‘s report, Deux Moi shared a response they got from someone after initially sharing the news of Teresa and Dina’s reported estrangement.

“Teresa and Dina are on the outs,” they had reported.

Then, after questioning someone who was not named, the outlet shared an additional post on their Instagram Story, which pointed out that Teresa and Dina hadn’t been seen together recently, and they noted that Dina hadn’t “liked” any of Teresa’s recent posts.

“I would say so lol,” the person responded. “I haven’t asked Dina but I am seeing no hanging out and no likes.” 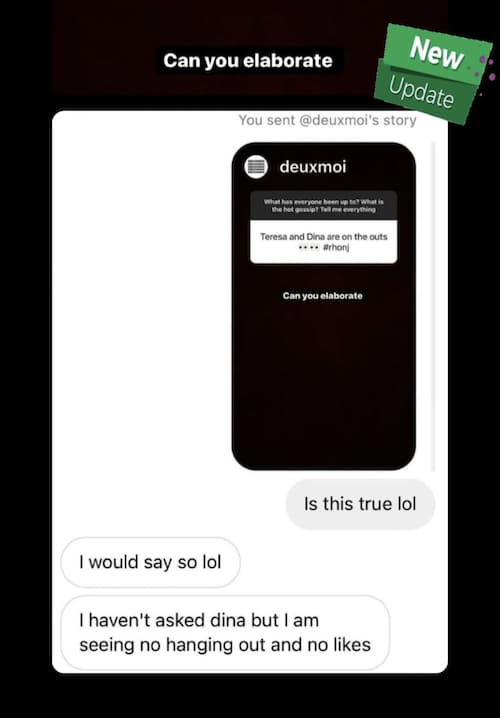 Earlier this year, following Teresa and Luis’ October 2021 engagement, which occurred on a trip to Greece that Dina and Dave were also on, reports of tension between Dina and Dolores Catania began swirling. However, after being questioned about why Dolores was left out of her engagement party as Dina was invited, Teresa insisted she simply left Dolores out because the event was about couples and she hadn’t yet gone out with her boyfriend, Paul Connell.

A short time later, Dolores hinted that it may have been Dina who got in the way of her invite.

“Whatever the reason is, should there be a reason? No,” Dolores told Page Six. “To me, there was no good reason — whether it was Dina or whether it was we didn’t go out for couples.”