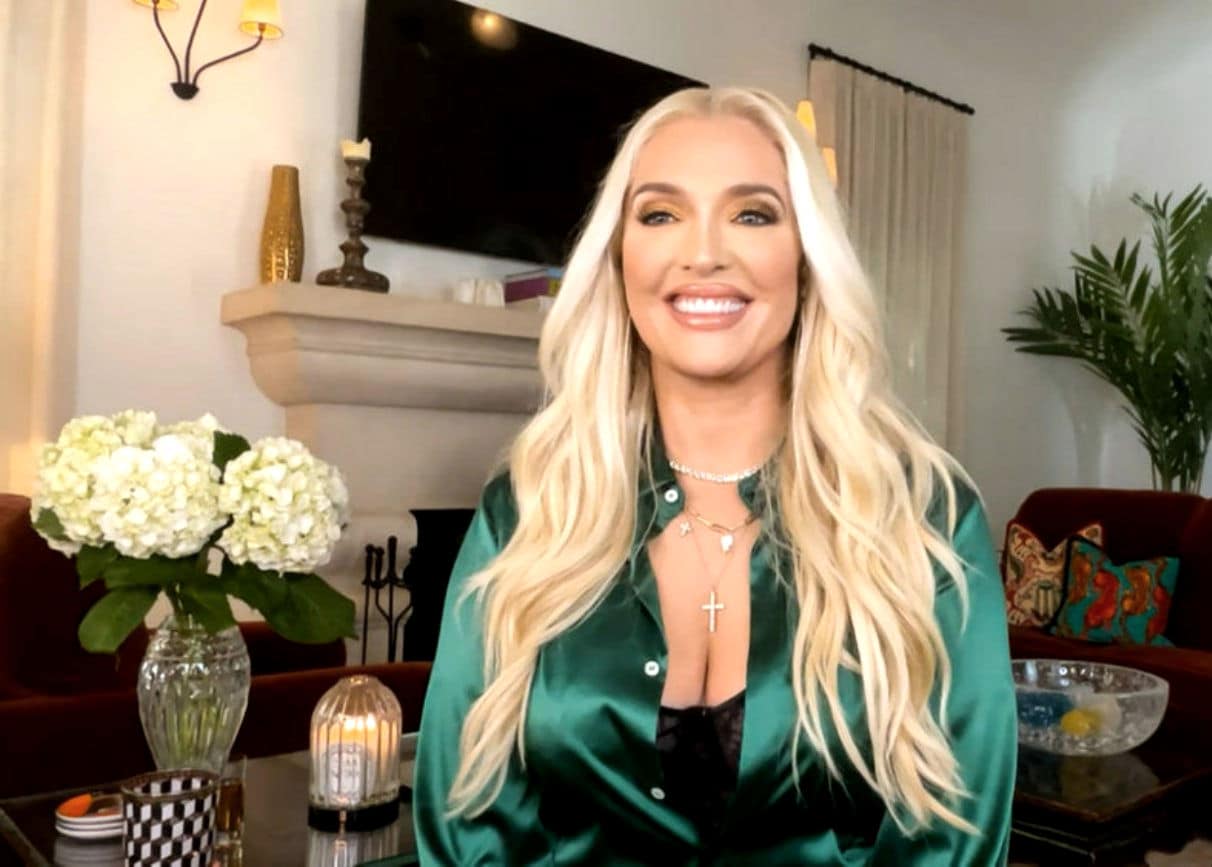 Erika Jayne appeared on Wednesday’s episode of Watch What Happens Live, where the Real Housewives of Beverly Hills cast member opened up about last week’s taping of the reunion and more.

Before addressing Kathy Hilton‘s drama in Aspen, sharing her season 12 regrets, and dishing on Diana Jenkins‘ $100,000 donation to Thomas Girardi‘s Lion Air clients, Erika said that when it came to filming the reunion, she and her castmates did not end the hours-long taping in a good place.

“It was a lot. I mean, it was really trying, and it was hard to see some family dynamics in front of us,” Erika revealed on the September 14 episode of WWHL, seemingly referring to Kathy and Kyle Richards. “It was tough. It was tough, and I will say this: You know, none of us took a cast picture, and none of us hugged each other as we walked off. It was a first.”

“It was a first,” host Andy Cohen agreed. “I didn’t even kind of push it, and it was… I think when you see, you will see why.”

On recent episodes of the show, Kathy has been in the midst of drama with Kyle. But when it came to their tequila debacle, Erika said she didn’t think Kyle or any other member of the RHOBH cast was trying to be rude as she attempted to promote her liquor.

“I don’t think that anyone was doing anything on purpose to not celebrate her tequila so yeah, I was a little shocked,” Erika said of Kathy’s reaction.

And when it comes to next week’s episode, Erika said the show will be complete “chaos.”

Because she was in the midst of her ongoing legal drama throughout filming, Erika encountered a number of testy moments with her co-stars, many of which she regrets.

“My regret is that my delivery was not controlled and that I was so angry and so beat down and that I was too reactive,” she confessed. “I cannot change that. I can only speak about where I was at that time. It’s been tough. Everybody knows that, and look, you’re witnessing me at an absolute low point in my life. I can’t sugarcoat it.”

Recently, Diana has been making headlines for the $100,000 donation to families impacted by the Lion Air crash. And while Erika “liked” a shady tweet about the issue, which suggested it was “phony,” she clarified on WWHL that she did not feel the gesture was a “dig.”

“No, not a dig at all towards me. I think that Diana was really tired of hearing the women criticize the earrings, and she just put her money where her mouth was, and she was like, ‘You guys, I’m tired of hearing it. If you care so much, if you’re constantly bringing this up to Erika, do something about it.’ And she did,” Erika explained.

Then, when asked how she’d feel if Sutton Stracke did the same, Erika said she can’t really answer the question.

“I don’t know because they didn’t do it so it doesn’t matter,” Erika stated. “Diana, that’s who she is. She’s a philanthropist all around the world, and she’s done great work so it’s natural to her.”

Erika then shut down a question about why didn’t she originally think Jax deserved an apology for her yelling at Garcelle Beauvais‘ birthday party due to his age — even though she got mad at Eileen Davidson for bringing up her son, Tommy Zizzo.

“No no no, what are you talking about? That’s not true,” she insisted. “I absolutely delivered an apology and took full responsibility for my bad behavior. That is not true. Not at all.”

Later, during the WWHL: After Show, Andy gave a nod to Erika’s recent court victory, which saw her dismissed from a $5 million lawsuit.

“It was, yes,” Erika said, agreeing it was a big deal, and saying it would “hopefully” set a precedent for her other cases.

“It was a good day. I’m very grateful. The fight goes on, but I am very confident,” she noted.

When a virtual audience member appeared to ask Erika which of her relationships were impacted the most by the cast’s trip to Aspen, Erika said that the drama of the recent reunion exceeded the events of their winter getaway.

“I think more so at the reunion than Aspen because we said a lot of things at the reunion, and there were some really big developments after that I think had more of an impact,” she shared.

Also, on the live broadcast of WWHL, Erika was asked how she felt about Garcelle calling her out for failing to turn over her $750,000 earrings before being forced to do so on The Real.

“I’m surprised at nothing, and when she text me of course, she’s like, ‘Let me give you a heads up,’ but it came like, after the show,” Erika revealed. “I think my response was the letter ‘K.’ But everybody has to do what they feel is right in this game and she’s made a choice.”

She also said that she has some new music coming out soon and said she’d like to go on tour.

“I miss it. The last show I had was on Broadway and it’s time to get back out there and have some fun,” she declared. “I really want to do that, connect with an audience, have a good time, and forget your troubles.”