Erika Jayne Shares Cryptic Posts About “Sins” After Claim Publicist Leaked Kathy Story on RHOBH, Agrees She and Lisa Rinna Are the Same

Erika Jayne shared a cryptic post on Wednesday ahead of the finale episode of The Real Housewives of Beverly Hills.

Just before fans watched as she was accused of teaming up with Lisa Rinna and leaking stories about Kathy Hilton‘s meltdown in Aspen in an effort to deflect from her legal drama, Erika took to her Instagram Story, where she spoke of someone else’s sins and reacted to her and Lisa trending together on Twitter.

“Think on YOUR sins,” Erika wrote on October 5. 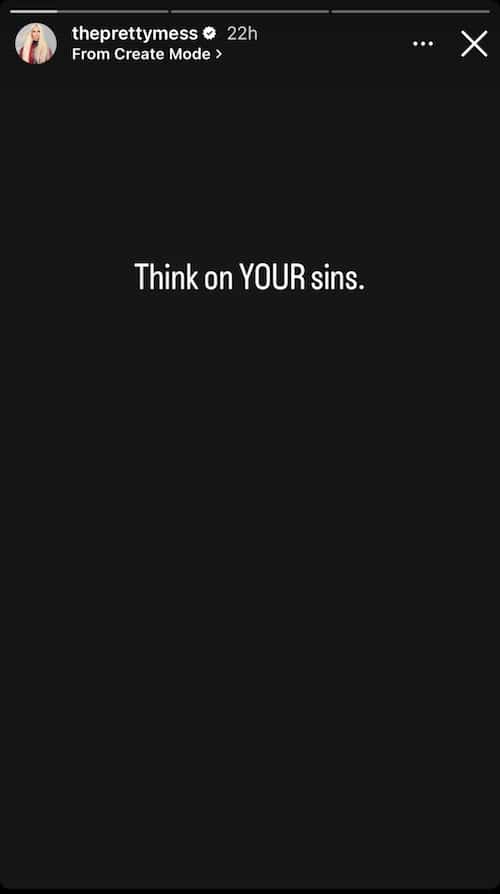 During Wednesday’s RHOBH finale, Kyle Richards told Erika that after her sister Kathy held an investigation into who it was that leaked negative information to the press, including a false and “damaging” rumor, she learned that Erika’s publicist was the alleged culprit.

Following the claim, Erika tells Kyle to show her what she has and claims it was “convenient” for Kyle to blame her publicist for the leak, and Lisa slams Kyle’s accusation as “unf-ckingbelievable.”

In another post shared to her Instagram Story, which was reshared from one of her fan accounts, Erika reacted to the news that she and Lisa were trending together on Twitter under the topic “Erika & Rinna.”

Apparently, fans had a lot to say about the duo amid Wednesday’s finale.

“Birds of a feather, trend together,” the fan page wrote in their caption. 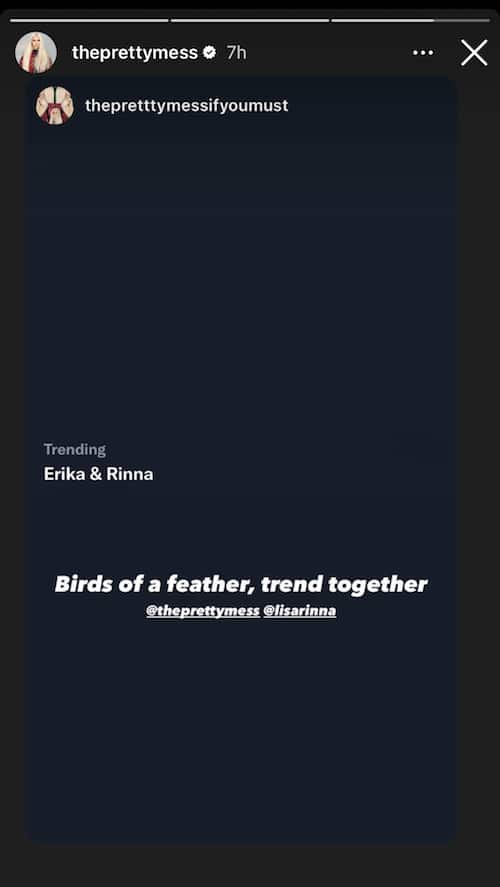 After Lisa came forward with claims regarding Kathy’s meltdown in Aspen, accusing her co-star of threatening to destroy Kyle and her entire family and suggesting she was also planning to take down NBC and Bravo, she was widely accused of exaggerating the story, which also reportedly included Kathy jumping up and down and beating on walls.

However, according to Lisa, she told the story as it was — even as Kathy “spent a lot of time and money and effort trying to silence [her].”

While fans may never know what exactly happened with Kathy in Aspen, Andy Cohen confirmed on his SiriusXM Radio show last week that the topic was further discussed at the reunion.