Home Real Housewives of Beverly Hills News Ken Todd Slams the Cast of RHOBH! Accuses Them of Bullying Lisa Vanderpump and Covering Up Their Lawsuits While Funding Lifestyles With Other People’s Money, See His Scathing Post

Ken Todd Slams the Cast of RHOBH! Accuses Them of Bullying Lisa Vanderpump and Covering Up Their Lawsuits While Funding Lifestyles With Other People’s Money, See His Scathing Post 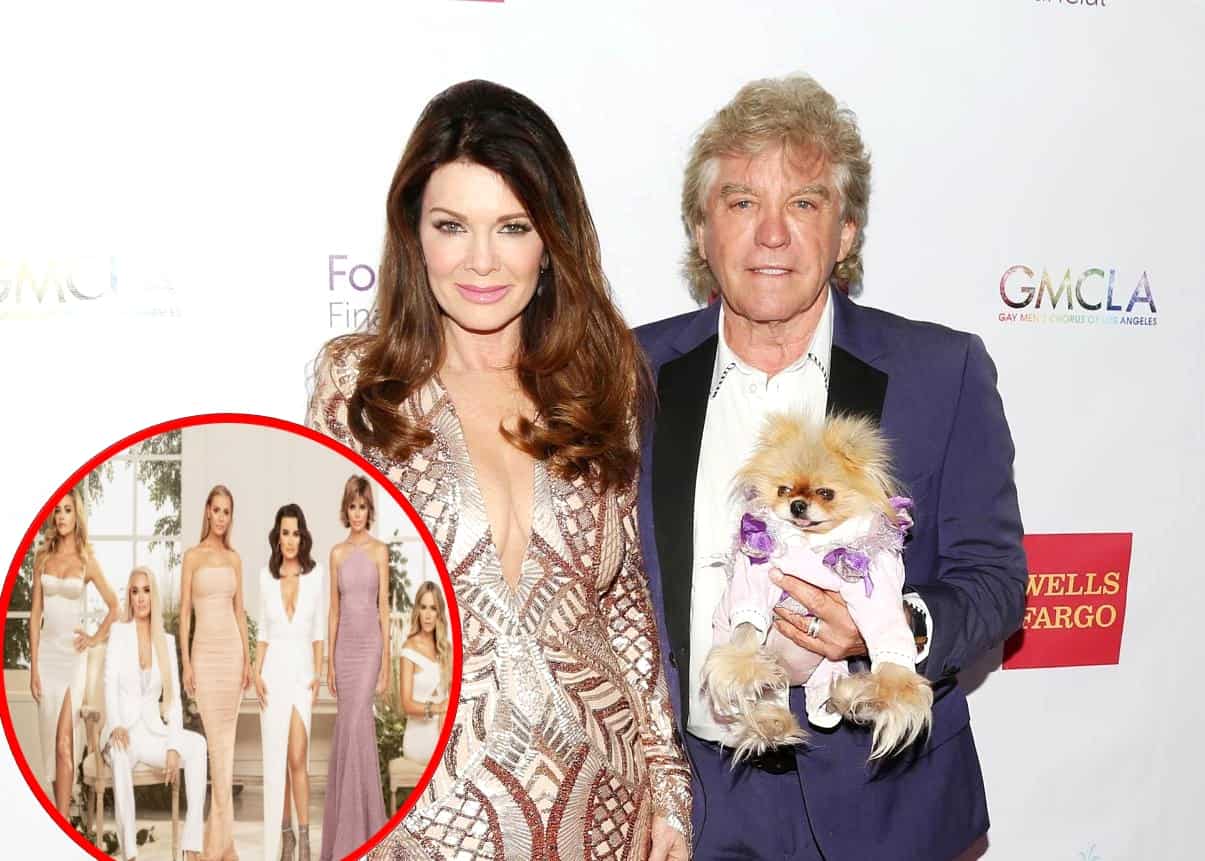 Lisa Vanderpump‘s husband Ken Todd is calling out the Real Housewives of Beverly Hills cast in a scathing lengthy post on social media.

On Sunday, July 21, Ken took to his Twitter page to blast the RHOBH ladies as he accused them of bullying Lisa while trying to sweep their own lawsuits under the rug. He also slammed them for their “nastiness” and “petty” attacks against his wife as he claimed they funded their lavish lifestyles with other people’s money.

Ken started out his post by stating that since it’s his birthday, he wanted to get some things off his chest.

“It’s a year this month that all the negativity against my wife started,” he wrote. “This year, there has been a huge amount of nastiness that has pushed my wife to the brink.. When, at a time in her life like this, she needed her friends!”

Ken then slammed the RHOBH cast members as hypocrites, stating they chose to focus on Lisa while covering up their own money issues and lawsuits.

“What really irks me is the hypocrisy of this whole matter,” he shared. “The very PUBLIC issues – lawsuits, over 50 million dollars of them, loans in default, rehab, business misdoings, bankruptcies – have all been swept under a carpet. Lifestyles paid for with other people’s money, I call bulls–t!”

Another bothersome issue for Ken was his opinion that not enough focus was put on Lisa’s success in getting a law passed to protect dogs – as the main storyline focused on the Puppy Gate doggy drama.

“It disgusts me that the very fact that a resolution passed through Congress, in an attempt to save thousands of dogs worldwide, was brushed aside – years of our work was ignored as all of the focus was on just one dog. I am not asking for anything now, not even the 5 grand owed to our dog charity,” wrote Ken, referencing the penalty that is owed to Vanderpump Dogs by Dorit Kemsley for failing to return a puppy she adopted to the foundation. The dog ultimately ended at a shelter after Dorit gave it to a friend, which started the Puppy Gate feud after the cast accused Lisa of leaking the story to the media. 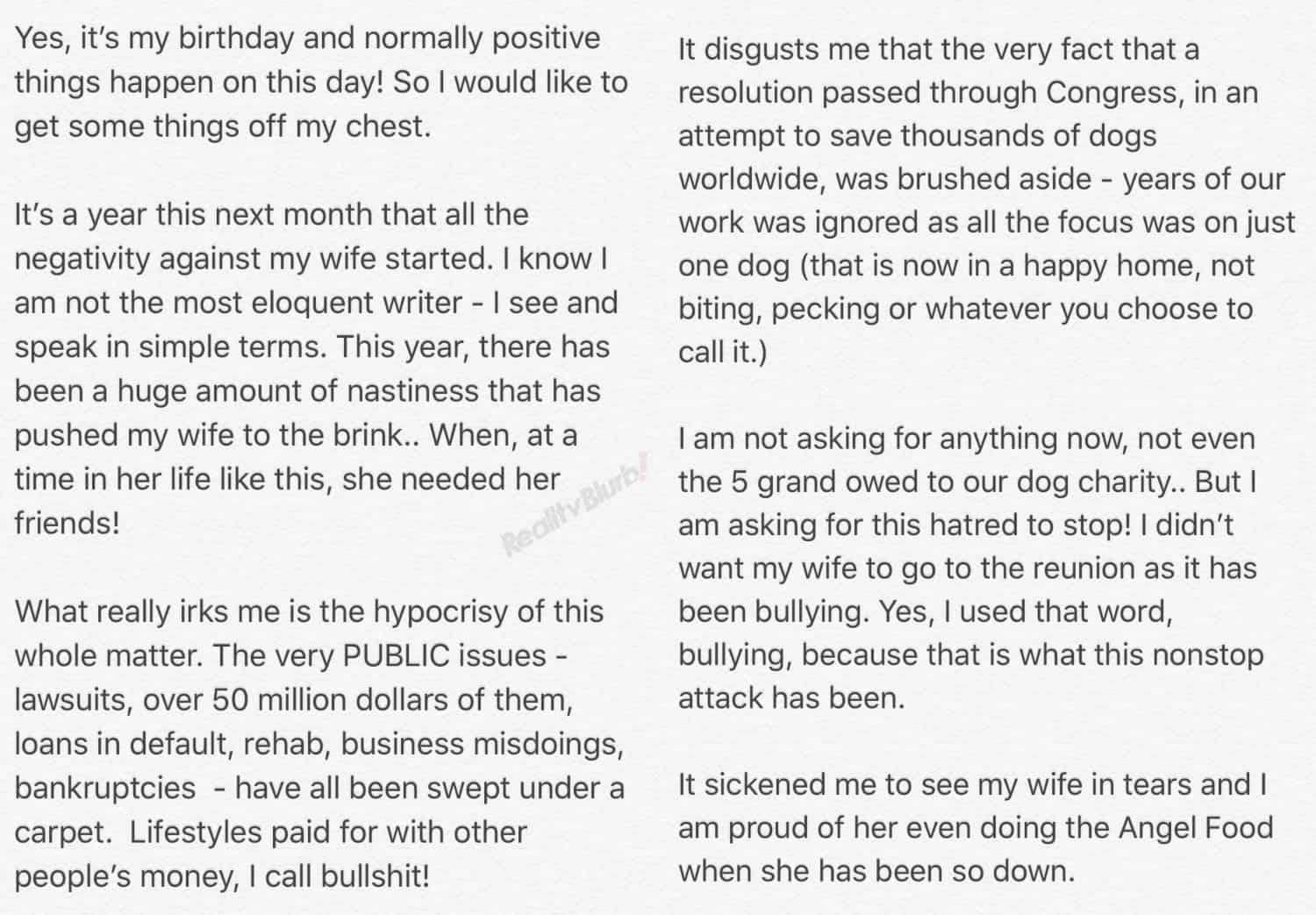 Lisa’s husband then went on to call on the cast to stop their “hatred” towards her.

“I am asking for this hatred to stop!” he continued. “I didn’t want my wife to go to the reunion as it has been bullying. Yes, I used that word, bullying, because that is what this nonstop attack has been. It sickened me to see my wife in tears and I am proud of her even doing the Angel Food when she has been so down.”

To close out his post, Ken also mentioned some of the cast members attacking Lisa’s teeth and even throwing shade at her wine business.

“To now attack her personal hygiene disgusts me, I could put it out there that my wife’s breath is as sweet as she is as,” he wrote. “I am angry as it is a vile lie… Like so many other things that have been said about her. Attacking our kid’s business, Vanderpump Rosé is just mean spirited! It’s in some of the best restaurants in the world.”

He concluded: “So it’s not just Goodbye Kyle that I want to say… it’s goodbye to all of the vicious nastiness…there I feel much better now. Happy birthday to me.” 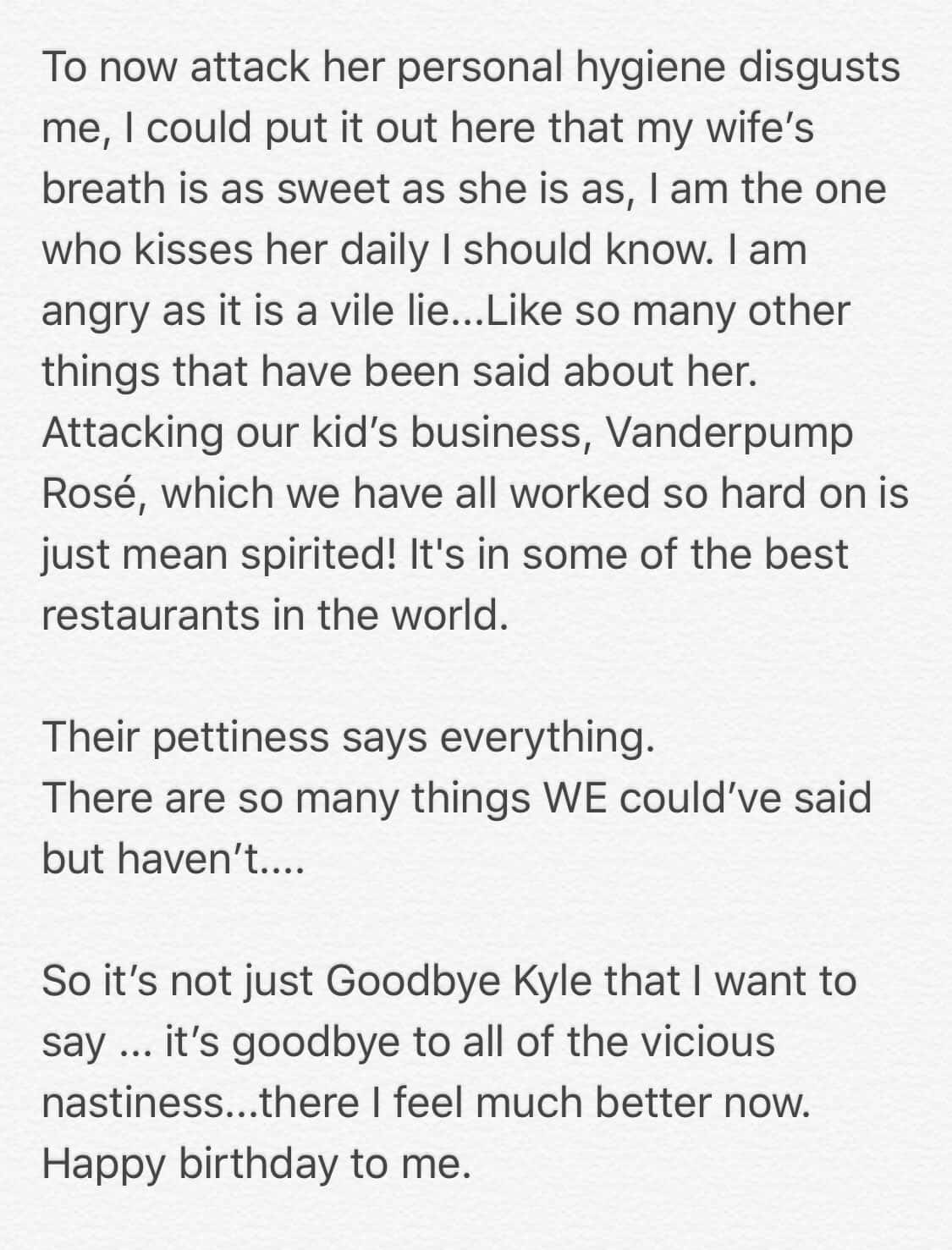