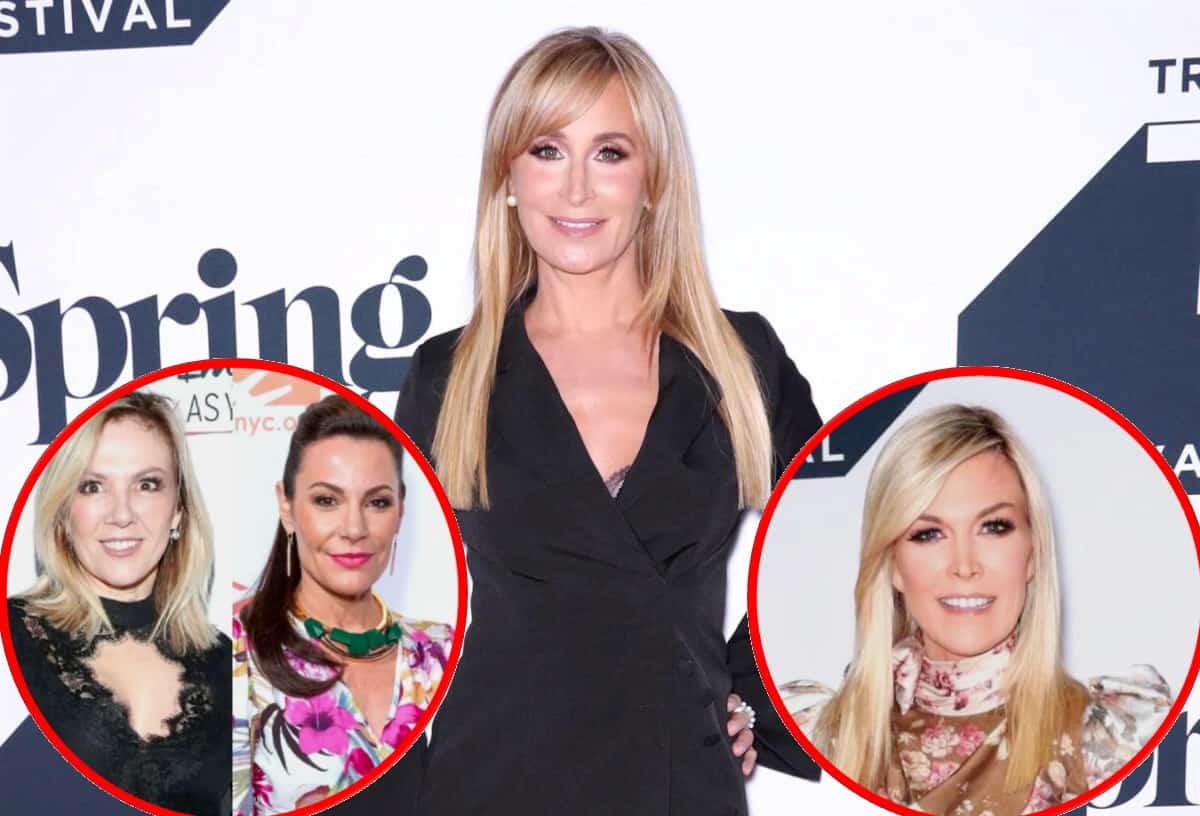 During a new interview with Reality Blurb, the Real Housewives of New York City star opened up about what her co-stars have that makes her jealous before explaining the recent comparison she made between new cast member Leah McSweeney and a “rash” and addressing Tinsley Mortimer and Scott Kluth‘s November 2019 engagement.

“I really give Ramona kudos for working so hard to keep the family intact after the divorce because she puts [Avery Singer] first. That’s so important. It was very messy and I really am envious that her and Luann have that,” Sonja told us of the relationships her co-stars have with their exes. “Luann has [Count Alexandre de Lesseps] over and they have meals as a family and I love that Ramona has that with [Mario Singer].”

While Ramona has been quarantining with Mario for the past few weeks at his home in Florida, Sonja made sure to tell us they are definitely not sleeping together.

“Hell to the no are they having sex because [Ramona’s] not going to upset the equilibrium that she has with Mario to be able to share time with him with her daughter together, especially under these trying times in this climate,” she explained.

In addition to Ramona and Mario making headlines with their unexpected reunion in Florida, Sonja recently made headlines herself after she compared newbie Leah to a rash.

When we asked Sonja if her comments were taken out of context, she confirmed, “No! That’s what I meant.”

“I said Singer is like an itch I can’t scratch and God, that’s been going on for 30 years and then Leah comes in like full-on rash. It’s like, don’t even try to itch it. You’ve got to get a treatment,” Sonja advised. “I love Leah as a new addition on the show [but] you don’t call her a breath of fresh air, nobody has.”

Although Sonja and Leah haven’t exactly become besties, Sonja did applaud the RHONY newbie as “intelligent” and “great to talk to.”

Moving on to Tinsley, Sonja admitted that it isn’t easy to maintain a friendship with her co-star because Tinsley doesn’t make herself as available as many believe she should.

“We stand in the same place as we always did. That’s what the girls always complain about. Tinsley’s always off doing Tinsley,” Sonja explained.

As RHONY fans likely heard, Tinsley got engaged to Scott last year in the midst of season 12 and was noticeably absent from the cast’s trip to Mexico, and other events, in the weeks that followed.

“She got what she wished for. She worked hard for that and she deserves it. She got Scott,” Sonja shared. “She has moved to Chicago, which is what she always wanted. He had not invited her before. That was the problem and they’re giving it their best shot and I’m rooting for them.”

“I guess she can thank me because when I brought her on the show, she told me she’s coming to live with me to start her brand up and be independent…. or else that’s what I wanted. And actually, she wanted to meet a guy and she did, through the show,” she continued.

As for whether or not Tinsley would be leaving RHONY after season 12, Sonja told us, “Well yeah, she’ll be done. She lives in Florida and Scott lives in Chicago.”