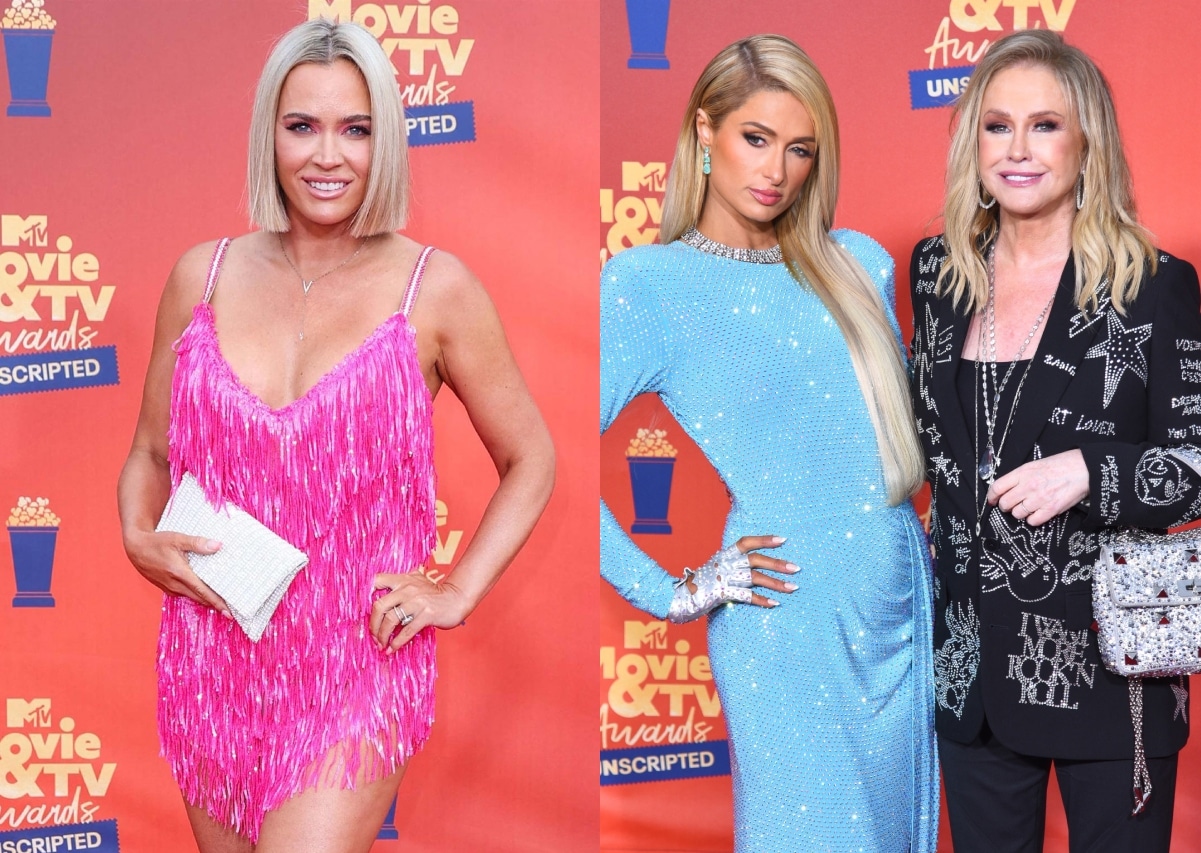 On a recent episode of her and Tamra Judge‘s podcast, the Real Housewives of Beverly Hills alum weighed in on Kathy’s statements, which Paris has denied, before sharing her thoughts on Denise Richards‘ road rage incident, explaining why her dad, John Mellencamp, doesn’t stand for the National Anthem, and reacting to the latest drama on The Real Housewives of Potomac.

“I definitely struggled with the IVF process but I also wouldn’t want anybody else to speak on it,” Teddi shared on the November 21 episode of Two Ts in a Pod.

Teddi then recalled how Paris reacted to the RHOBH cast’s treatment of her mom on season 12.

“Paris was really upset that other people on the show were talking about her mom. It doesn’t feel so good when it comes back around to you,” she noted. “I think that Kathy really stepped in it there and it was Paris’ story to tell.”

Teddi also said she “watched the Paris Hilton documentary,” which chronicled her childhood trauma, and is still “not over it.”

“It’s a lot,” she told Tamra before the Real Housewives of Orange County cast member brought up Denise’s vehicle being shot at as husband Aaron Phypers drove her to an L.A. set earlier this month.

“What did he do to piss them off, if they were being followed? We’ve seen Aaron’s temper before on [RHOBH]. I think there’s more to the story. It doesn’t sound logical,” Tamra said. “You’d have to know that your car was shot at.”

At that point, Teddi recalled a dinner party seen on RHOBH in which Aaron claimed he was being followed by the government.

“Aaron said that he has his government following him because he has a cure for… There’s something going on. Listen, it’s terrible. I can’t imagine the amount of fear… I hate driving and I hate guns. But I also am a little bit confused,” Teddi admitted. “Once the driver drove off… why didn’t they call the cops?”

Another point of controversy discussed in the episode involved Teddi’s musician father, who was recently spotted failing to stand for the National Anthem at an Indianapolis Colts game.

“I don’t want people to have the perception that he wasn’t doing it because he was being lazy. That’s not who he is but since as long as I can remember, my dad has never stood for the National Anthem,” Teddi revealed. “He comes from age of love and peace and he believes the National Anthem is a war song. He’s been to countless games and he’s never stood for the anthem once. He loves his country as much as anybody but, as this is the land of the free, it’s his right not to stand.”

Towards the end of the episode, Teddi and Tamra rehashed the happenings of Sunday night’s episode of RHOP, which saw Mia Thornton and Wendy Osefo in a dispute that ended in Mia throwing a glass of water in her co-star’s face.

“Mia was really bugging me, going back and forth, straddling the fence between telling [Karen Huger] that she likes [Charrisse Jackson-Jordan] but she was theatrical about needing accommodations and [saying] she’s siding more on Karen’s side and thinks meeting up for lunch would be drama,” Teddi stated. “Mia was really on my last nerve.”

“She bugged me so bad on this episode that every time I saw her face I’m like, ‘No. Go away. Just go away,’ Tamra agreed. “The whole thing about [Jacqueline Blake] needing to borrow stuff… So what? She’s being an asshole.”

“She’s really like being an a–hole to her friend… It’s like beyond,” Teddi replied of Mia’s treatment of Jacqueline. “The friend’s trying to do her best to break in, get to know the other girls. It’s like, give her a little bit of room to make a relationship here without sh-tting on her all the time.”

As for their thoughts on Robyn Dixon, Tamra said it was “kind of annoying” to watch her record the drama between Mia and Wendy as Teddi called out her hypocrisy.

“If Robyn wasn’t so against what happened with [Monique Samuels] and [Candiace Dillard-Bassett], and so wanting Monique off [the show], then I would’ve thought that it wasn’t a time to joke and make a video of something like that potentially going down,” Teddi noted.

She then added, “What I did find interesting though is when the security guard was taking Mia out of the situation, when she started to get up and come at Wendy, the security guard didn’t really say anything to her but when he took Wendy away, he said, ‘You’re better than this. Don’t let her get to you.’ I think it’s pretty telling.”