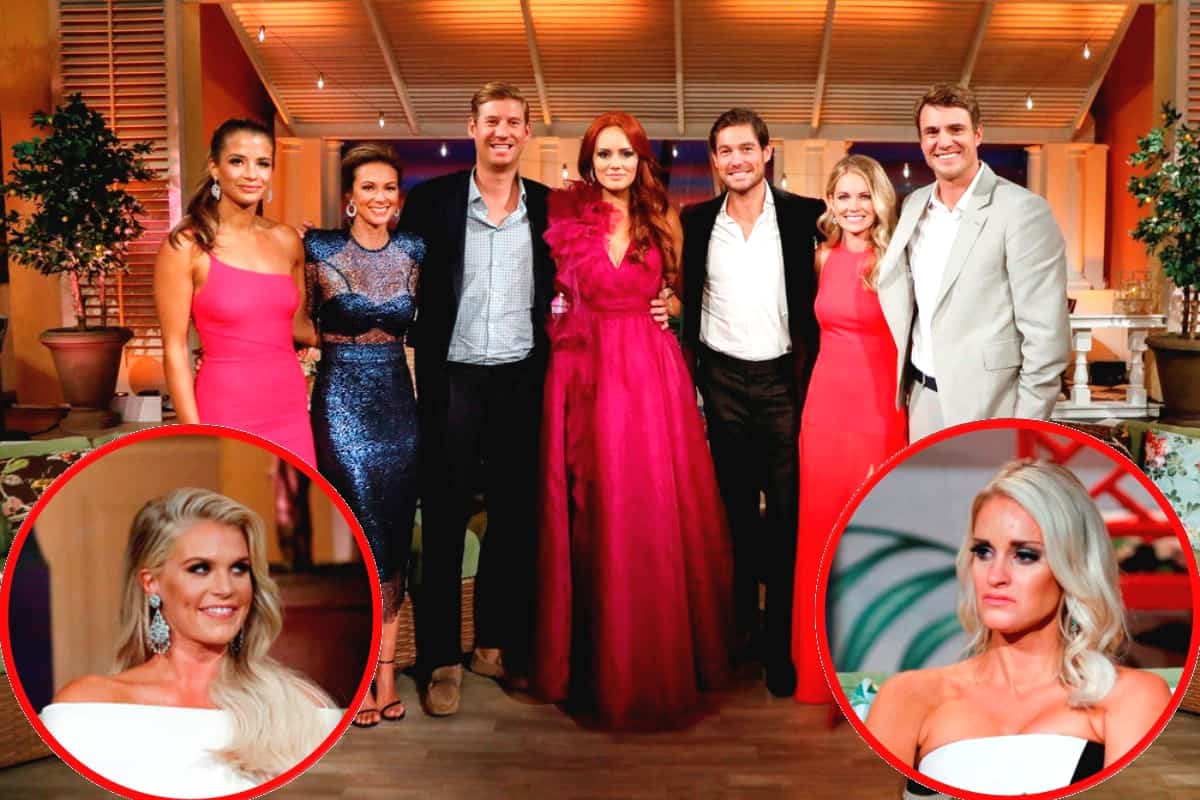 In the words of Andy Cohen, this is the “dramatic conclusion” of the Southern Charm reunion…

Danni joins the couch just in time for Andy to discuss Kathryn‘s “sobriety.” Austen continues to voice his opinion on the issue and explains that he’s very disappointed in Kathryn’s behavior on Watch What Happens Live. Naomie claims that someone saw Kathryn drinking before the show, and when Kathryn gets defensive, Cameran reminds Kathryn that, “No one is coming for your sobriety.”

Evidently, no one knew that Kathryn was “allowed” to drink, and so the cast felt like they had to cover for her the whole year. Kathryn should have done a better job of defining “sober.” It would have alleviated a lot of uncomfortable situations this season.

The treehouse trip gets dissected, and Danni gets questioned about holding Kathryn accountable for her actions. Naturally, Kathryn feels like everyone made a big deal out of nothing when she legit went MIA for three days before the trip. Kathryn explains that the accountability issue will def be brought up in court, and she’s annoyed that she always looks like a terrible friend. Danni gets honest and states that she can’t rely on Kathryn 100%, particularly because Kathryn has recently formed a tight friendship with Madison.

Austen cannot stand listening to Kathryn dance around this new bff duo, as Kathryn half denies/half admits to having Madison watch her children during supervised visits. Thomas approved of Madison supervising their children, but come on. Kathryn is one selfish girl! In one breath, she calls Danni her best friend, but then she goes and befriends Madison, the same chick who is spreading rumors about Danni! Naomie suggests that Madison is manipulating Kathryn to hurt Danni or that Kathryn is playing the fence. Either way, it’s pretty messed up.

Eliza gets welcomed to the reunion, and it seems like none of the cast actually remember who she is. Eliza wastes no time getting emotional whilst discussing her father’s infidelity. It’s either that or her family’s wealth. Those are Eliza’s only storylines! We are treated to re-watching Eliza’s debut at Patricia’s dinner at the beginning of the season. Eliza blames her young age on her behavior. She also shares that she felt judged before anyone truly got to know her.

When asked why in the world she has befriended Ashley, Eliza retorts, “I see the good in everybody.” Right. You must have to look reallllllllllly long and hard at Ashley to be able to befriend that wackadoodle! Eliza claims she didn’t know Ashley offended almost all of the cast members, but I’m calling her bluff. Eliza explains that her family is still friends with Thomas, but she refuses to comment on the relationship.

Well. No one has met Chelsea‘s hot sailor boyfriend. I borderline think that he may not exist, but the way Chelsea talks about him makes him seem less George Glass-like. Chelsea becomes annoyed when the concept of work gets brought up. “The perception is you guys don’t have jobs.” Austen gets all bothered when discussing said jobs. He states that he worked three jobs when he first moved to Charleston, but Chelsea reminds him that Austen has the option to not work…something she can’t do. #richkidproblems, huh?

Ah, the infamous screenshots. Andy demands to know why Austen was talking sh*t about Chelsea and her new boyfriend. Because Austen was angry, drinking, and rage-texting Madison, he got busted. Madison showed Chelsea these messages, and obviously Chelsea became upset. As to why Austen and Chelsea didn’t work out in the past, Austen states, “I want someone who has a higher sex drive.” Gross. Somehow, Chelsea forgave the guy and tried to reform one of Charleston’s biggest party boys. In case you forgot, that p*ssed Shep off greatly.

Eliza gets the boot after a very short stint on the couch. Then, a very smug, but beautifully styled, Madison joins the group. Austen explains that he is not with Madison, but they still sleep together. Like as of last night. I guess you can say things are complicated. Luckily, Andy saves us all from watching that damn viral video, but that doesn’t stop him from discussing it at great length. Austen still maintains his innocence, but everyone knows that he at least hooked up with “the blonde one.”

Andy wants to address the double-standard Madison experienced this season. Madison still gets the blame because she allegedly hooked up with someone during a 24-hour break-up with Austen. Those two are so on and off that I can’t keep up. Austen retaliated by taking some girl to SEA WORLD. Wait, Austen thinks Sea World is a substantial date?! I’m sorry. I’ll stay focused. Madison states that she fights with Austen the most about Craig and Shep.

Austen continues to have no backbone and defends Madison regarding the DM to Danni’s boyfriend. Danni straight up loses it and explains that she didn’t think it was a big deal that Madison DMed her boyfriend, but when Craig found out and played telephone with the information, things really exploded. Madison coldly tells Danni, “Now you know why I don’t like you.” Danni calls Madison a bully and tearfully lets her know that she has many reasons to be upset with Madison.

The old “white trash” comment resurfaces. In case you forgot, Shep called Madison white trash. In some unaired footage, Shep also called Kathryn white trash and he defends himself by saying Kathryn WAS acting trashy. He doesn’t seem one bit apologetic and states that he was raised properly. Shep quotes Eleanor Roosevelt by saying, “If you don’t have anything nice to say, then come sit next to me.” Everyone raises their eyebrows when he says this, and Andy really tries to get to the heart of Shep’s anger toward Madison. It’s obvious that Shep sweats Madison, but he denies, denies, denies…cuz ya know, she’s white trash and all…

Next up, the Colorado trip. To kick things off, Chelsea explains that she is mortified by her behavior toward Craig on the bus. I thought it was hilarious that she straight-up went off on the guy—someone had to do it. They tiptoe around each other like crazy. Take the weed dinner, for instance. Austen explains that Kathryn flipped out for some attention, and Cameran jumps on that bandwagon. Kathryn tries to defend herself by talking about her kids, but we all saw her acting wild on WWHL. Pick a lane, GF.

The bombshell “secret” that Madison spilled gets brought up. Andy wants to know what made Madison go so low as to blurt out that Shep gave Danni chlamydia. Madison says that she was provoked and just blacked out. Danni surmises that she was brought into the chlamydia scandal because Madison was P-Oed about the whole DMing issue. Danni repeats that the rumor is NOT TRUE, but Austen states that he would “never make that up just for fun,” and Shep denies ever telling Austen anything.

Andy tries to make Danni feel better by saying chlamydia (which is cured by taking seven days of antibiotics) is not a big deal, but Cam gets upset by this and explains that it is a mortifying claim… especially for a single woman in her 30s. Maybe if Madison took Shep’s advice for Madison to “shut the f*ck up” for once, none of this would have ever happened. Can we talk about how Cam’s hubby tells her to STFU?! She matter-of-factly explains that Jason has told her, “Cameran, you need to shut the f*ck up and you know what? I shut the f*ck up.” Wow.

Austen tells Shep that it was a messed up move to bring the video girls to Patricia’s party. Danni states that Shep probably did it because “he was trying to say I think this relationship is a joke.” Yeah, I’ll say, Danni. Shep tries to explain that he has a history one with of the girls, but, “The other girl was manufactured by me and approved by Craig.” Riiiight. Shep loves this drama and clearly doesn’t feel apologetic. In fact, he sort of looks proud of the stunt he pulled! It certainly successfully made Austen squirm!

Madison and Danni are dismissed and chat once outside the set. Madison apologizes and Danni makes it clear that the majority of their issues stem from the guys. They hug it out because Danni doesn’t like “animosity” and it appears as though everything is well and good between the girls.

The rest of the cast prepare to toast the end of the season. Before Andy wraps it all up for season six, he addresses each member one last time. Naomie was unusually quiet this season and during this reunion. When asked if she is basically losing herself in her relationship, she denies it. Craig seems to be in a better place and Kathryn’s main priority is to keep her kids happy and safe. Austen explains that his relationship with Shep is “better than ever,” and Cam reminds the viewers that she is “one and done” with babies.

Chelsea is boring, but she lets Andy know that we will never see her boyfriend on the show. Shep states that he is “a better person for knowing all” of the people on the show, and I’m still wondering where Whitney is! Andy says a quote sent in by Patricia for the toast, and, not to be outdone, Shep yells out some lame thing about friendships. Everyone nods in agreement because all’s well that ends well, and that, my friends, is a wrap.

TELL US – THOUGHTS ON THE SOUTHERN CHARM REUNION PART 2?