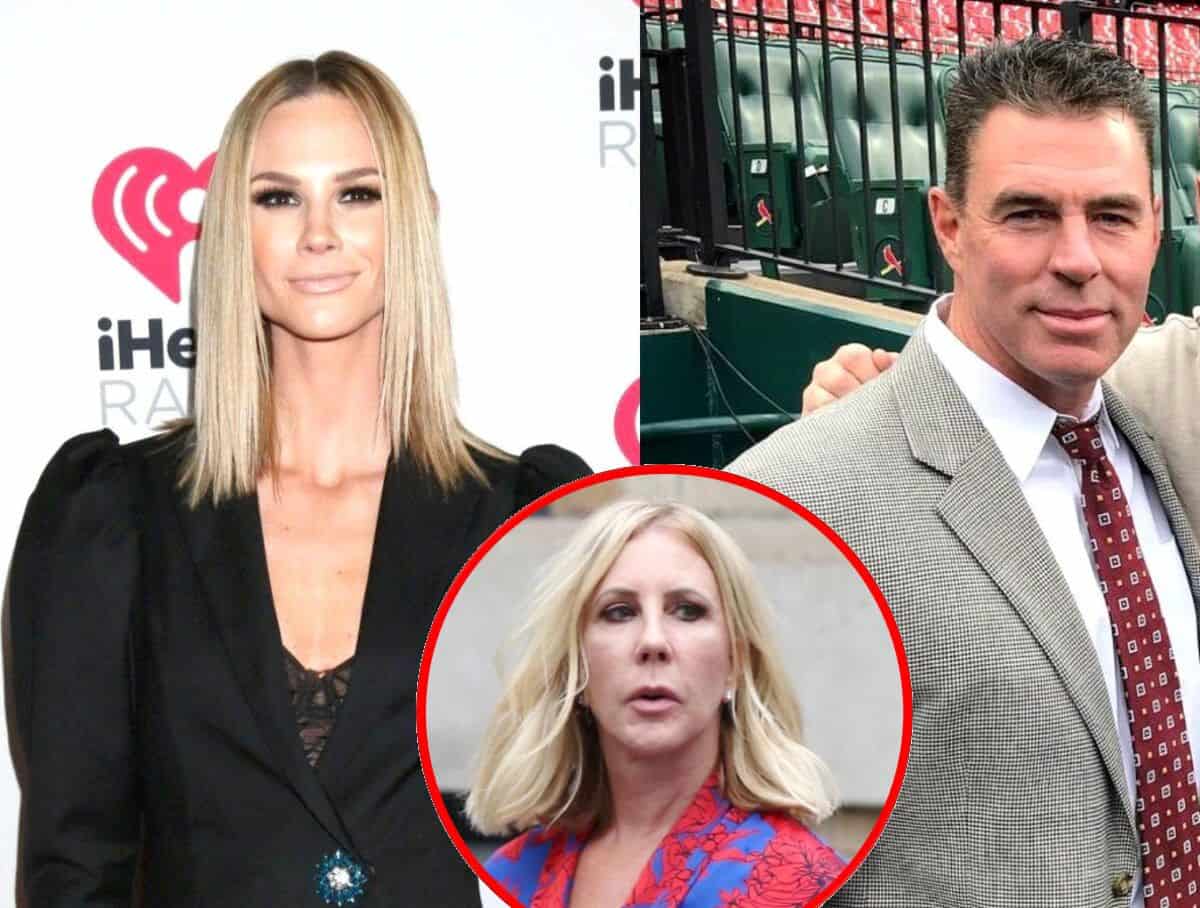 Meghan King Edmonds opened up about her divorce and the end of her marriage to Jim Edmonds during a recent podcast appearance.

After suggesting the former MLB player cheated on her because he was emasculated by her success, the former Real Housewives of Orange County star opened up about her relationships with her former co-stars, her boyfriend, Will Roos, and addressed the recent arrest of Real Housewives of Salt Lake City star Jen Shah.

“I can see the finish line. I’m so excited. I have an expensive bottle of wine I’m ready to open and put this behind me,” Meghan shared of her divorce on the April 5 episode of The Sarah Fraser Show.

According to Meghan, she believes Jim was unfaithful because he couldn’t handle the fame and success that came with her role on RHOC.

“On a show like the Housewives, women get a platform, they get a voice, their confidence is raised, they’re recognized in public. They become an individual, and the husband can’t handle it. So what does he do to make himself feel better? Maybe he cheats. Maybe he lies. Maybe he gets mean,” she shared.

Following her October 2019 split from Jim, Meghan briefly dated Christian Schauf before moving on with Will.

“It’s going slow and steady. We were friends first, and we’re not jumping into anything. He hasn’t met the kids. We’re just having fun,” she said of their romance.

While Meghan said she hasn’t watched RHOC since she quit in 2018, she labeled the show as “toxic” before claiming her most toxic co-star was Vicki Gunvalson.

“Kelly was pretty toxic too, but when I was on with Vicki, that was the season that her boyfriend at the time was faking cancer, and I totally thought she was involved with it. So I didn’t like her. And she was mean to me because I found it out,” Meghan explained, adding that she felt she “had a duty to prove” Brooks Ayers was faking cancer.

After setting out to expose Brooks for his lies, mainly because she didn’t want people watching to believe that the juice company Brooks had interest in had cured his “cancer,” Meghan got on the bad side of Vicki and remained blocked by her on social media.

Although Meghan was never close with Vicki, she’s stayed in touch with a number of her former RHOC castmates, including Tamra Judge, Shannon Beador, Heather Dubrow, Lizzie Rovsek, and Kelly Dodd, and also talks to Braunwyn Windham-Burke “on occasion.”

That said, she has no current plans to return to the show.

“Never say never. [But] as of right now, I live in St. Louis, Missouri,” she explained.

As for a television return, Meghan said she thinks it’ll happen eventually.

“I’m not saying Housewives necessarily, but I think I’ll be back in front of the camera,” she teased.

While Meghan keeps in touch with Kelly, that doesn’t necessarily mean she’s a fan of her recent antics, including her COVID-19 comments and “Drunk Wives Matter” hat.

“She has no filter on her mouth. She doesn’t have a lot of control over herself. She’s so impulsive. So I’m not surprised by any of this,” Meghan said of Kelly’s many controversies. “She’s a little tone-deaf at times, but I don’t think she meant any harm.”

“I don’t think Kelly’s racist. I do not,” Meghan further confirmed.

Meghan then added that she believes Kelly is potentially “a non-racist pretending like a racist.”

Also during the interview, Meghan weighed in on the arrest and charges pending against Jen.

“Is she a narcissist? A narcissist feels like they can never get caught and they’re above the law. I’m sure she, in her head, she reconciled that it was a legitimate business because she’s probably a raging narcissist,” Meghan suspected of the RHOSLC cast member.