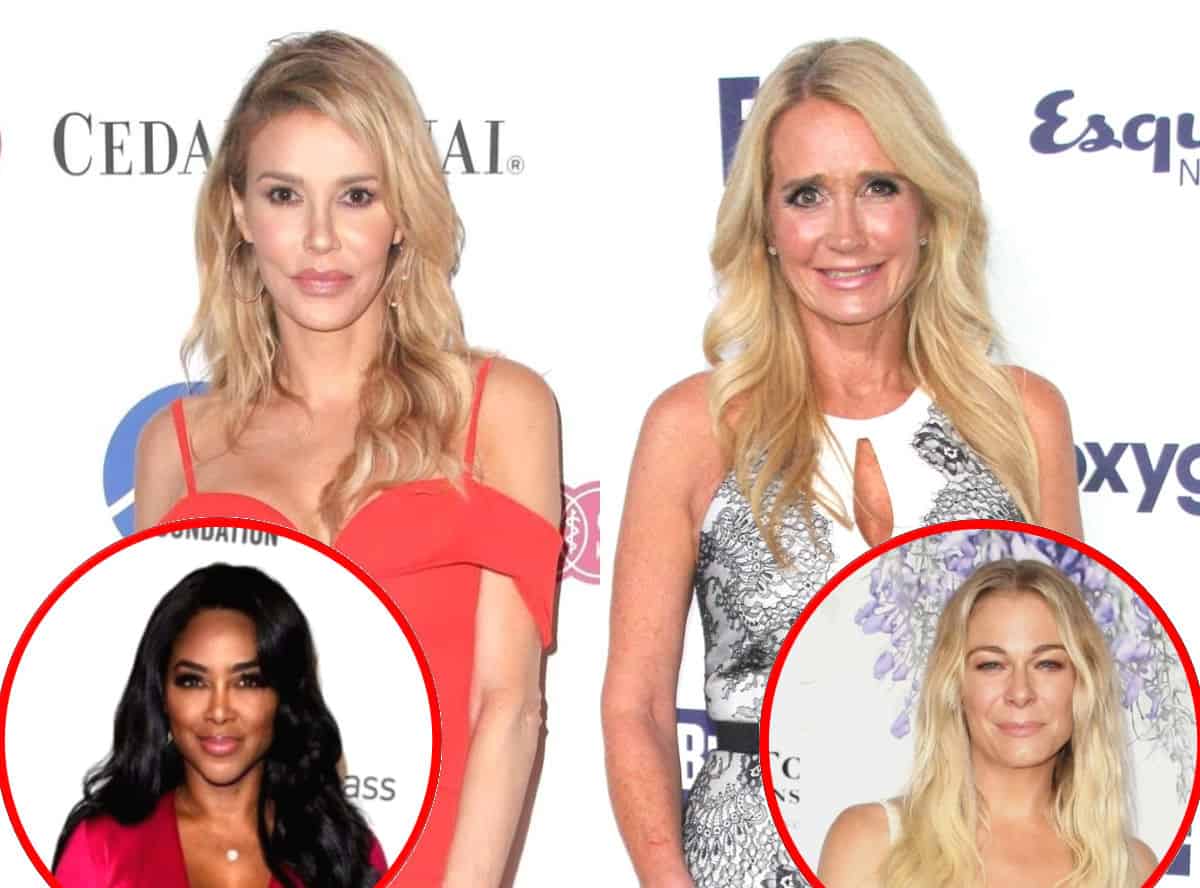 Brandi Glanville once believed she would be brought back to the Real Housewives of Beverly Hills cast following Lisa Vanderpump‘s June 2019 exit from the series.

During a new interview, Brandi opened up about the apparent end of her Bravo run before dishing on her relationships with Denise Richards and Kim Richards, reacting to Kathy Hilton‘s new role on the show, and offering an update on her relationship with LeAnn Rimes, the wife and former mistress of her ex-spouse, Eddie Cibrian.

“I had had conversations in the past about coming back, [Andy Cohen] and I had. He’s like, ‘Maybe after [Lisa Vanderpump] leaves, and we’ll look into that,’ And then Lisa left and then really, unfortunately, her mom and brother passed, and they were like, ‘Listen, we don’t want to pour salt in her wounds,'” Brandi revealed to Entertainment Tonight on April 20, adding that she believes her, “Housewives days are done.”

As RHOBH fans will recall, Brandi was not included in the reunion special after going public with her alleged affair with Denise.

According to Brandi, she felt “extorted” by the situation after Denise, who she has not seen since filming on season 10, informed her that if her husband, Aaron Phypers, learned of their rumored hookup, “he’ll kill you.”

“I felt like a cheater, and I hate cheaters,” she explained, noting that it was Kim who had encouraged her to talk about the encounter on-camera.

“I want to have a conversation with [Denise]. I do. I’ve reached out through her agent. I’ve reached out to her. I’m sure I’m blocked in her phone. But, who cares if two chicks hook up? I just don’t think it’s that big of a deal,” Brandi shared.

In addition to suffering a falling out with Denise during filming on season 10, Brandi also lost touch with Kim after a joke about threesomes rubbed her the wrong way.

“I last talked to her New Year’s Eve. I texted her, I emailed her. We’re not talking,” Brandi confirmed.

“It’s depressing,” she went on. “And I talked to Kyle about it and, you know, Kyle is not that close to her either. So she’s like, ‘I don’t know what to tell you. You’ve been such a great friend to her.'”

While Brandi won’t be featured on RHOBH season 11, she’ll be tuning in as a viewer.

One particularly dramatic storyline of the upcoming episodes of RHOBH is Erika Jayne‘s divorce, which Brandi believes will be difficult for Erika to watch.

“I think it’s going to be difficult for her because she’s already lived it, and then to go back and watch it? Because she seemed real pissed, really pissed in those trailer spots,” Brandi pointed out. “She does not have a good poker face. She was pissed.”

As for Kathy’s “friend” role, Brandi said she’ll be a great addition.

“Kathy is hilarious,” Brandi explained. “She’s always laughing. She’s always happy. She’s the sweetest person, and if she has a little cocktail, it’s real fun. So I think she’s going to be great.”

“My manager reached out and she said that they specifically wanted myself, Kenya, and Candiace, and they were not going to take no for an answer,” Brandi recalled, adding that she was “nervous because of Kenya.”

Looking back on the experience, Brandi said that after arriving on set after Kenya, she immediately dealt with some diva behavior from the RHOA star.

“She lived up to her diva-ness a little bit, with, like, asking everyone to get her tea constantly, even like the producer,” she went on. “I’m like, ‘I think that’s your boss. I don’t think he’s going to get you tea.'”

Also during the interview, Brandi confirmed she and LeAnn are in a great place.

“This took time and 10 years,” Brandi stated. “And I think that LeAnn grew up a lot, and I know that I’ve grown a lot. We just we’ve grown up. We’re not little brats anymore… We’re, like, girly girls, we talk about everything and it’s all fine and great.”

“There’s no weirdness, there’s no awkwardness. The kids are super happy when we’re all together and it’s finally good,” she added.